Hitherto unknown to specialists, a group of around 30 special commissions by Eugène Printz will soon be presented in Arles at an exceptional sale. 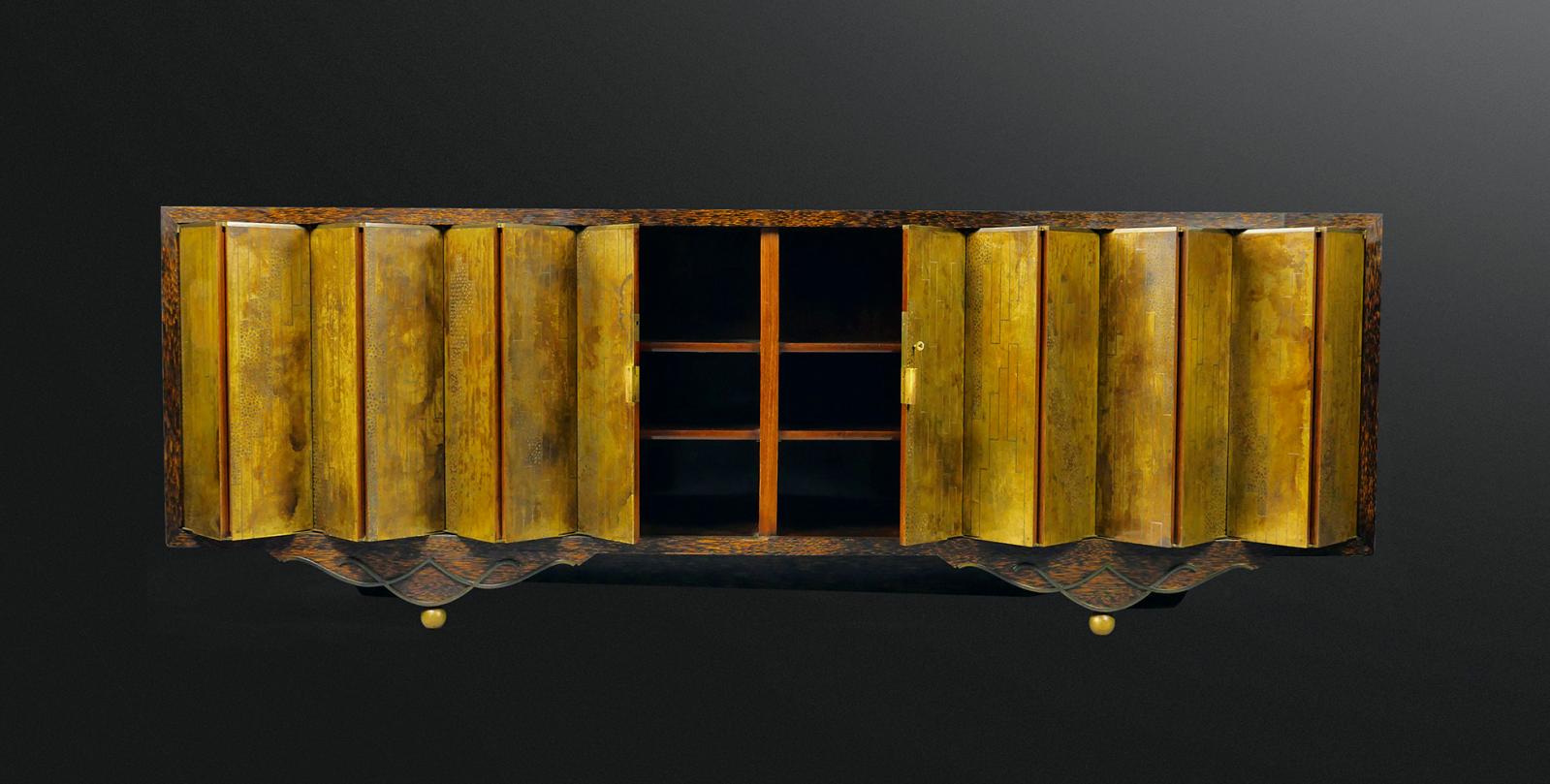 The concept remains fashionable: museums create "period rooms", letting visitors enter the world of an era or an artist. The young auctioneer Christelle Gouirand invites us to such an immersive experience in Arles on 3 October with the sale of some 30 lots Printz designed for a Paris flat in the 1930s and 1940s. They are "visually striking, incomparable and timeless," she says. The cabinetmaker's creations now fetch millions at auction, but they were already prized by privileged connoisseurs, "who, as the 1934 Printz Gallery catalogue attests, were willing to pay as much as 40,000 francs for a large chest decorated with Jean Dunand's copperware" (editor's note: around €28,900 in today’s money), says 20th-century decorative arts expert Amélie Marcilhac. From the late 1920s onwards, Printz attracted a prestigious clientele from around the world: aristocrats with a pioneering spirit or members of the financial and industrial elite. Alongside Jeanne Lanvin and the Princess de la Tour d'Auvergne was Madame V., who never replaced these pieces, which are presented intact: furniture, lighting fixtures, a large rectangular mirror with an acid-oxidised brass surround (€12,000/15,000) and three curtain rods with a quadrangular body in sponge-oxidised metal (€2,000/3,000). She kept her china in the large cabinet with two accordion doors decorated with Dunand's brass plates (€300,000/400,000) and her silverware in the elegant, sober cabinet decorated with brass rushes (€80,000/100,000), which stood in the dining room near the table and 12 palmwood chairs. After her companion’s death, she moved to a smaller Paris flat and then to her daughter's home in Arles, where the furniture had remained.

A Personalised Ensemble
The story dates back to the early 1930s, when Madame V. split up with her first husband and moved to the 16th arrondissement with Monsieur G., an important businessman. They spent their holidays in the Loiret, where Monsieur G. saw some of Printz’s furniture at the home of friends. He immediately fell in love with these boldly designed creations in rare materials. Then Madame V. decided to visit his shop. Before long she was making trips between her flat and Printz’s gallery at 81 de la rue de Miromesnil very often. The gallery already offered a wide choice, but Printz took a very modern, commercially successful approach, visiting his clients to discover not only their homes, but also their personalities. He went to Madame V.’s flat many times from around 1935 to her death in order to prepare gouache drawings and models used to make estimates. The drawings presented for sale are still proof, if any were needed, that Printz was a great assembler. For example, the splendid chamois red wooden desk lacquered by Dunand was the centrepiece of Monsieur G.'s office, echoed by two low bookcases flanking the fireplace.

A Cabinetmaker's Craftsmanship
In addition to their unique, original aesthetics, Printz's creations attest to his restless ingenuity. One example is a small, walnut-veneered cabinet that illustrates his great technical skill. Its two doors open up to reveal six drawers that swivel out from either side on a spherical base (€20,000/30,000). "Unlike other Art Deco designers, such as Marcel Coard and Jacques-Émile Ruhlmann, Printz was a true cabinetmaker," says Ms. Marcilhac. “He learned the trade in the family workshop in the faubourg Saint-Antoine, Paris, which he took over at the age of just 26 and kept throughout his life." This training also instilled him with a fondness for the furniture with mechanisms popular during the Louis XVI period. In addition to luxurious creations, for Madame V. Printz also made furniture adapted to more intrepid uses, such as a pair of mahogany and cane beds for grandchildren (€2,000/3,000). He also gave indirect lighting a central place in his interiors in order to ensure harmonious diffusion. An example is the floor lamp in black lacquer and sponge-oxidised brass rings, here estimated at €30,000/40,000, from the model designed in 1937, which he never abandoned.

Fruitful Collaborations
The brassware decoration Printz designed with Dunand set him apart from his contemporaries even more than his use of palmwood, his limited series and his penchant for massive forms contrasting with spindly metal legs. The furniture resulting from their collaboration is now the most sought-after: a two-metre long palmwood cabinet that belonged to Printz, then to his widow, fetched over $5 million at Christie's New York on 4 June 2019. Its base is similar to the one presented at this sale (€300,000/400,000), also dated circa 1937 and featuring geometrically decorated brass plates. Ours is different because the lacquerer, working to order, made hand-crafted one-off pieces in his workshop. Items based on "the collaboration between these two artists are particularly in demand because they were made to measure, which wasn’t so common," says Ms. Marcilhac. A third artist joined them for the charming secretary with eight Dunand brassware plates decorated with birds and ducks on the façade, inside in typical Printz sycamore with a set of drawers, shelves and leaves decorated with small animals frolicking in the grass based on Jean-Lambert-Rucki's drawings. The last collaboration, with enameller Jean Serrière, resulted in motifs based on Antiquity, such as the bathers adorning the enamel plates of a cabinet exhibited at the 1948 Salon des Artistes Décorateurs in Paris, now available for €150,000/200,000. This complete, authentic group is representative of Printz's most creative years.

3 questions for
Jean-Jacques Dutko
dealer in Paris and author of the monograph Eugène Printz with Guy Bujon (re-published in a larger print run in 2018), Éditions du regard.


Did you know about this group by Eugène Printz?
No I didn’t. It was a real discovery for me (...) But I did know about equally important groups that can no longer be found today.

Did you make any other discoveries?
I knew about the large chests, the lighting fixtures, the kekwood version of the red lacquer desk and the small cabinet with the sphere in red lacquer, but not the walnut. But this group’s interest lies in its completeness, from the curtain rod to the bed and the mirrors that you never see. The folding doors and copper decor are delightful. But my favourite piece of furniture is the red lacquer desk. It's a real folly. For me, this cabinetmaker stands out from all the great decorators. I also like Pierre Chareau, but Printz was always innovative.

What were people looking for when they went to Printz in the 1930s?
One of the great fashionable designers. He had already participated in fairs, notably the 1931 Colonial Exhibition in Paris, and in fitting out the Porte-Dorée Colonial Museum, located on the edge of the Bois de Vincennes. His talent was recognised. Moreover, he was an assembler. He staged furniture in real-life situations in living rooms and his gallery, which attracted many people. His creations, such as his luminous crown in oxidized metal (see photo), inspired many contemporary designers who, when they’re talented, create fabulous things.
The Eugène Printz collection by Madame V.
Arles - 26, rue Jean-Lebas - 13200
Arles Enchères
Info and sales conditions
Catalogue

Design: The Elegance of Mathieu Matégot
Newsfeed
See all news
Georg Baselitz Sculpture Goes On Display at the Institut de France in Paris
Unesco: Audrey Azoulay Reappointed Director
Refresh, A New Contemporary Art Program in Brittany, France
Sheila Hicks Given Carte blanche at the Mobilier National in Paris
Not to be missed
Spotlight
Eugène Dodeigne: The Apostle of Pure Form
The Walking Man recently left La Piscine, a museum in Roubaix, where…
Spotlight
The Studio of Frans II Francken and the Wedding at Cana…
Belonging to a long line of Flemish artists, Frans II Francken (1581-1642) asked…
Spotlight
The Finest Empire Silverware in One Collection
Doctor Vincent had a real passion for the French Empire and more…
Spotlight
The Composer Claude Debussy by Jacques-Émile Blanche
This portrait of Claude Debussy by Jacques-Émile Blanche, the star…