Magnificently restored, the Duc d'Aumale's apartment in Chantilly, decorated by Eugène Lami, reminds us that the eclecticism of the Second Empire was born under the July Monarchy. 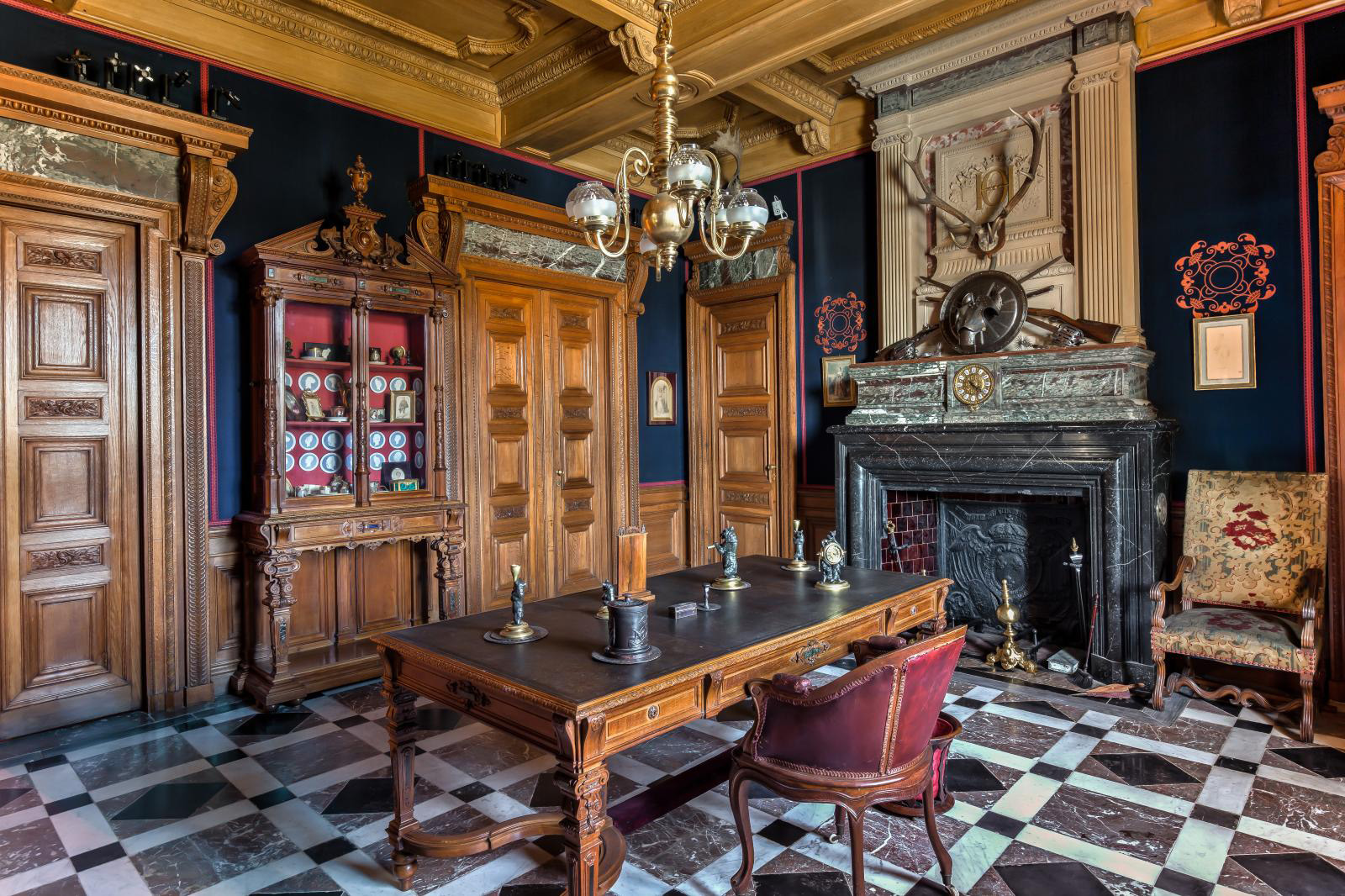 Neo-Renaissance dining room, later transformed into an office. Display sideboard and bookcase by the Grohé Brothers. Marble paving based on the floor painted by Pourbus in the portrait of Henri IV in the Louvre.
©Sophie Lloyd/Chantilly estate

Neo-Renaissance dining room, later transformed into an office. Display sideboard and bookcase by the Grohé Brothers. Marble paving based on the floor painted by Pourbus in the portrait of Henri IV in the Louvre.
©Sophie Lloyd/Chantilly estate

After Versailles and Fontainebleau, Chantilly pays tribute to the "Louis-Philippe style": a return to grace that began in 1991 with the "1814-1848. Un âge d’or des arts décoratifs" ("1814-1848. A Golden Age of Decorative Arts") exhibition staged by Daniel Alcouffe at the Grand Palais. Many of the works presented were later installed in the new rooms of the Grand Louvre, but at the time, they were not highly regarded by the public, as witness an amusing anecdote: during the lunch after the opening of the "Golden Age", a representative of LVMH (the exhibition sponsor), said to his host, with a knowing smile: "Between you and me, Mr. Alcouffe, it's really very ugly..." Louis-Philippe and his sons played very different roles. The king engaged a dialog with the new bourgeois class, whom he received at the Tuileries because he had cut himself off from the Legitimist society of the Faubourg Saint-Germain (a royalist group who upheld the rights of dynastic succession to the French crown): in their eyes, he was only the democratic son of a regicide. He and his wife Maria-Amelia were content to adopt a very conservative style, as they had done until then at the Palais-Royal and in the châteaux of Neuilly and Eu, with help from an old friend of the monarchies: Pierre Fontaine (1762-1853), the survivor of the architect duo he had formed with Charles Percier (1764-1838). The king's sons, in contrast, sought to preserve links with the traditional aristocracy and create new ones with the intellectuals and artists of their time. After their marriages, these fashionable young men formed youthful, model households in the new liberal society.

The Birth of Eclecticism
Eugène Lami, drawing master to the Duc de Nemours, and commissioned by Louis-Philippe to produce paintings for Versailles, created modern interiors for him and probably for the Duc d'Orléans at the Pavillon de Marsan, where he mingled styles and added contemporary furniture. "The great passion of M. le Duc d'Orléans, if he has one, is a very modern passion that has seized French souls for old furniture, old remains and old relics of old centuries. ...] He took advantage of the king's disdain for these glittering gewgaws to rifle through the Garde-Meuble de la Couronne and the royal châteaux for his own benefit," said writer Jules Janin. In Chantilly, which he inherited from his cousin the Duc de Bourbon, the Duc d'Aumale asked Eugène Lami to furnish the private apartments of himself and his wife Marie-Caroline of Bourbon-Sicile on the ground floor of the Renaissance "Petit Château". An aesthete and man of the world, Eugène Lami, dubbed "the official poet of dandyism" by Baudelaire, invented the term "interior designer" as we know it today. Not only did he draw projects in the form of sketches, but he also provided precise proposals with detailed renderings for their execution. He integrated old paneling into new ensembles and entrusted the motifs of ceilings and overdoors to painter friends. As an intermediary, he found old furniture considered crucial for the intended decoration in the Garde-Meuble Royal, or bought it from "curiosity dealers", and had other pieces made to his designs or indications by cabinetmakers and joiners of the time. The Petits Appartements at Chantilly confirm that most of the characteristics usually ascribed to the Second Empire already existed under the July Monarchy. Former styles were evoked in modern designs with no concern for fidelity to the originals, while allusions were imbued with fantasy and imagination. In particular, the Louis XV style, despised during the French Restoration for its connotations of frivolity and even excess, was rehabilitated. The Louis XVI style, far from being launched by Empress Eugénie in the Tuileries, as is often said, was already in full swing at Chantilly, as witness the Duchesse d'Aumale's chamber, where the old white and pink silks were replaced by blue satin after her death. It was embellished with Louis XV/Louis XVI paneling whose ornamental detail still derived from the neoclassical vocabulary, even if some elements, like the garlands, were very naturalistic. The bed itself, which regained its former lace, was in the Louis XVI style. The writing table by the Grohé brothers was Louis XV in its bronze mountings, and Louis XVI in its beads, ribbons and porcelain. The former "salon des dames" with its white and gold paneling paid tribute to the old château's interior.

A Taste For Collage
The unusual harmony of orange (the rosewood veneer) and purple (the arabesque-patterned purple silk velvet hanging added in 1872 as a sign of mourning) gave the Duchess's salon an arresting "Ludwig II of Bavaria" look, with its bold mix of rocaille and classicism, particularly evident in the "Louis XVI" chairs by Ternisien. The first appearance of a highly inventive "Louis style" came with glazing beads surrounded by double Ionic pilasters and alternating single and twin consoles in the cornice. The desk's feet with Ionic capitals displayed an extravagant taste for collage. In the duke's bedroom, Lami reconstructed a set of panels from a small group that probably came from the princely apartments of Versailles, then being demolished. Opposite the iron bed of the soldier who distinguished himself in the Algerian War stood the minister's desk in ebony and rosewood veneer by Grohé, redolent of a "universal exhibition" masterpiece. In a red and gold ambiance, the "Louis XIV" Condé salon saw the triumph of the Boulle style in all its forms: an 18th-century Boulle commode, revamped by Grohé, rubbed shoulders with a "modern Boulle style" cabinet by Mombro. The Renaissance oak and marble dining room was one of the first examples of what became a type in Haussmann-style apartments, with its symbolic "Henri II" sideboard, here produced by Grohé in a Mannerist spirit à la Wendel Dietterlin. The floor was inspired by the one painted by Pourbus in his portrait of Henri IV. The inauguration of the apartments was celebrated by large receptions in the spring of 1847. But barely a year later, the 1848 Revolution forced the entire royal family into exile in England. Lami followed them, and was thus able to attend the opening of the Great Exhibition of the Works of Industry in the Crystal Palace, London, in 1851. He also became familiar with the luxurious charms of England's great mansions. On his return to France in 1852, he was asked by James de Rothschild and his wife Betty to oversee the decoration of the Château de Boulogne, and then the Château de Ferrières, completed in 1859 by Joseph Paxton, the architect of the Crystal Palace. Lami expressed the full measure of his talent in this huge residence. A watercolor presented in the Chantilly exhibition shows the central hall with its glass ceiling. Mannerist allusions are combined with glances at Versailles; the polychrome marble fireplace is simultaneously Renaissance and Baroque. The impression of magnificence is accentuated by Charles Cordier's Atlases and caryatids. Meanwhile, the furnishings reflect the learned and poetic eclecticism initiated in Chantilly, superbly restored today.

The Château de la Mercerie, the “Versailles of Charentes”
Newsfeed
See all news
Rethinking the Reconstruction of the Basilica of Saint-Denis
Artist Kader Attia Will Curate 2022 Berlin Biennial
Dallas Museum of Art Will Return Stolen Statue to Nepal
Some California Museums Are Now Tentatively Reopening Their Doors
Not to be missed
Cultural Heritage
Yale Art Gallery, the Oldest University Museum in Am…
Founded in 1832, the Yale University Art Gallery is home to an encyclopedic…
Cultural Heritage
Audemars-Piguet, Between Modernity and Tradition
The Audemars Piguet museum-workshop unveils its heritage collection…
Cultural Heritage
Crystal Bridges: The Museum that Walmart Built
Initially criticized for its links to the retail giant, ten years…
Cultural Heritage
Père Lachaise: Birthplace of the Modern Resting Plac…
Père Lachaise Cemetery welcomes 3.5 million visitors each year to…