Made especially for Ettore Bugatti by Mido, this all-gold watch echoes the shape of the radiator grille of the automobiles that brought the carmaker fame and success between the wars. 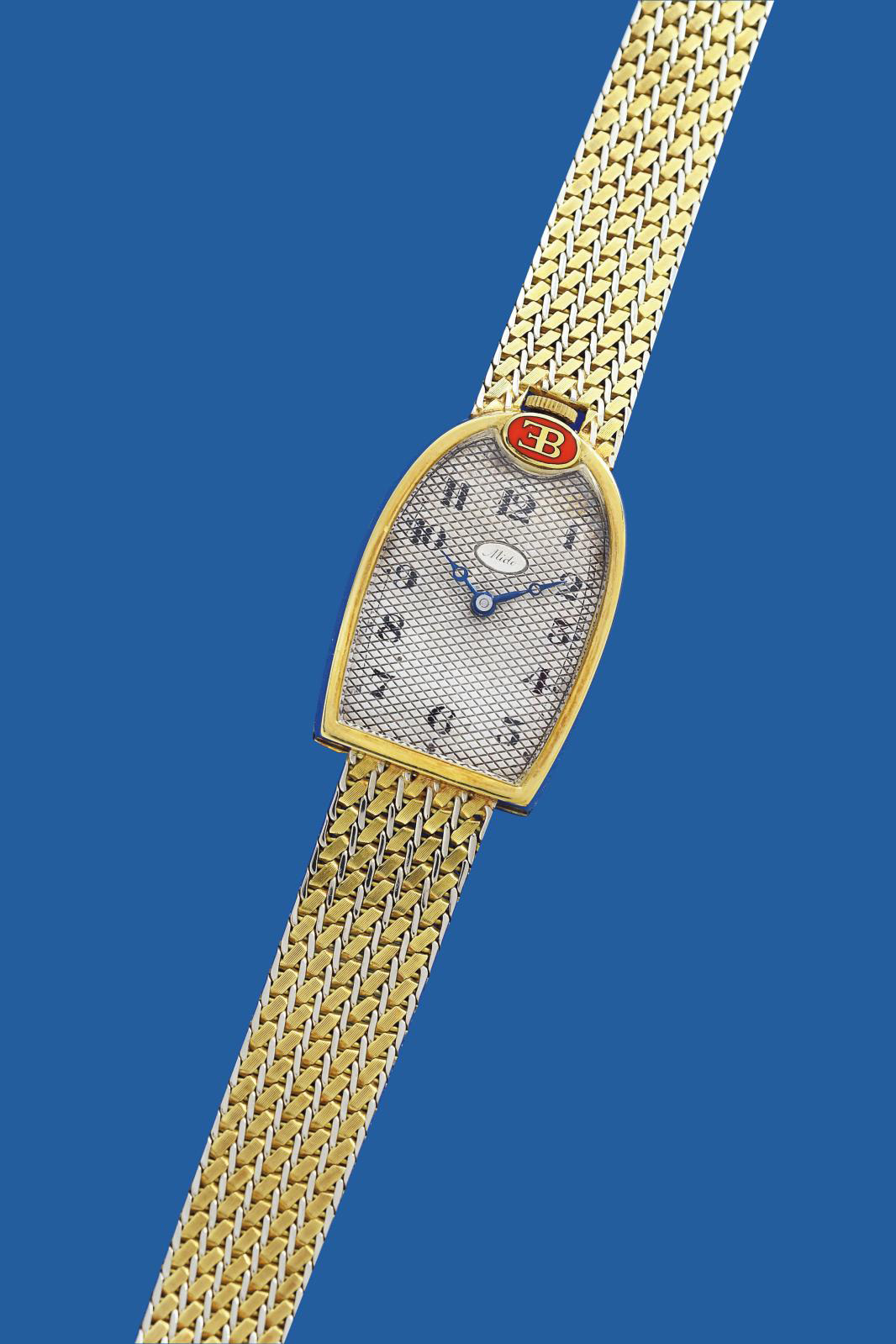 With its dial in the shape of a horseshoe grille and its red enameled logo with the initials "EB", this watch certainly evokes its illustrious owner, Ettore Bugatti (1881-1947), who wore it on his wrist for many years. This fact and its provenance have been confirmed by sources close to the family, but above all through research carried out by experts Mr. Guyon and Mr. Léger. Even if the Swiss watchmaking company has no archives prior to 1935—i.e. before the inventory number 400,000—we know the number of watches produced per year. Thus, the one here, numbered 261.492, bought at public auction by its current owner some fifteen years ago, can be dated to 1929.

"We now know that Ettore Bugatti ordered six series of watches from Mido between 1926 and 1932," says Alexandre Léger. This represents a few hundred examples intended for his drivers, his mechanics and his family, notably his sons. But while he ordered watches with leather straps for the latter, he earmarked an entirely gold model for his personal use. This was an exceptional achievement requiring extreme skill from the watchmakers. "No soldering marks are visible, and the white and yellow gold bracelet seems totally integrated into the dial, which provides unusual comfort and flexibility," says the expert. One detail may also be important: the bracelet is 19 centimeters (3.5 inches) long. This is quite a large size for the time, suited to Ettore Bugatti's build, and will enable the future owner to wear it with ease—which is not always the case with antique watches.

Ettore Bugatti, a Visionary
Ettore Bugatti came from thoroughly artistic stock, as the son of Italian cabinetmaker Carlo Bugatti and brother of animal sculptor Rembrandt Bugatti. He himself studied sculpture at the Milan Fine Arts Institute before turning to his other passion, mechanics. But this was an art form in its own right at the beginning of the 20th century: a modern adventure any visionary would have wanted to tackle. Bugatti's innate creativity served him well throughout his career, especially in the design of his racing cars, for which he created the bodywork himself. They remain in the collective memory as the embodiment of the first competition cars, with their clean, elegant lines. This man of taste, both authoritarian and sensitive by nature, could not have the same watch as everyone else. When in 1926 he approached Georges Schaeren (1882-1958), founder of Mido, he ordered the brand-new models with a grille, for which the patent had only just been registered.

The Automobile: A New Market
The watchmaker saw the commercial potential of the fast-burgeoning automobile. At the beginning of the 20th century, the world of the horse-drawn carriage was being fast left behind by motorized cars with impressive metal bodies. At the time, they sported the famous front grilles which took the form of an arch in the 1920s. Although their function was to ventilate the engines, grilles also became an important aesthetic aspect of the car and the receptacle for the brand's logo and visual signature. Ettore Bugatti understood this, as did Georges Schaeren, and chose a horseshoe form, faithfully represented in the Mido watches. The "boss", of course, had a few personal requests: the logo of his brand in red enamel, surmounted by a radiator cap whose form is echoed in the winding crown, and an entirely crisscrossed silvered dial, like the Bugatti's grilles. It was a huge success, and other car brands rushed to obtain their own watches: Ford, Fiat, Buick, Excelsior and Hispano-Suiza were Mido's next customers.

Exceptional Sales
As an object both aesthetic and technological, the watch shares certain aspects with the car. The orders Ettore Bugatti placed with Mido celebrated the victories of his famous Grand Prix Type 35, produced between 1924 and 1931 in his factory in Molsheim, Alsace. This was one of the "thoroughbreds" that brought Bugatti unparalleled success. Another car model dating around 1929 (the same time as his personal watch) made him famous the world over: the Type 41, known as the "Royale": an outstanding vehicle over 6 meters (19.6 ft) long, with an engine producing 300 hp. Only seven were made, including a Napoleon coupé, "the boss's car", now in the Cité de l'Automobile in Mulhouse (Schlumpf collection). This is considered a "Mona Lisa on wheels". Thanks to the director of the museum, Aurélien Weisrock, the sale expert, was able to see it and take photos of the "boss's watch in the boss's car"! A marvelous image for a remarkable auction that also illustrates the booming sales of collector's watches belonging to famous figures—like Paul Newman's Rolex Cosmograph Daytona, which sold for €15.3 M with Philips in 2017 in New York, and Steve McQueen's Tag Heuer Monaco, which sold for over €1.8 M last December, again in New York. Symbolizing a man's social standing and success, watches, like cars, are an extension of the owner's identity. But, as Mr. Machoïr says, "while there are many Bugatti owners, wearing the "boss's" watch will be a unique privilege."

Watches, Cars and a Record for Ettore Bugatti’s Mido Watch