The 19th-century German scientist, who coined the word "ecology," is one of the heroes of Laura Bossi's exhibition "Origins of the World" at the Musée D'Orsay in Paris, awaiting its reopening since December. We look at the role his Art Forms in Nature plays in the decorative arts, from Art Nouveau to design today. 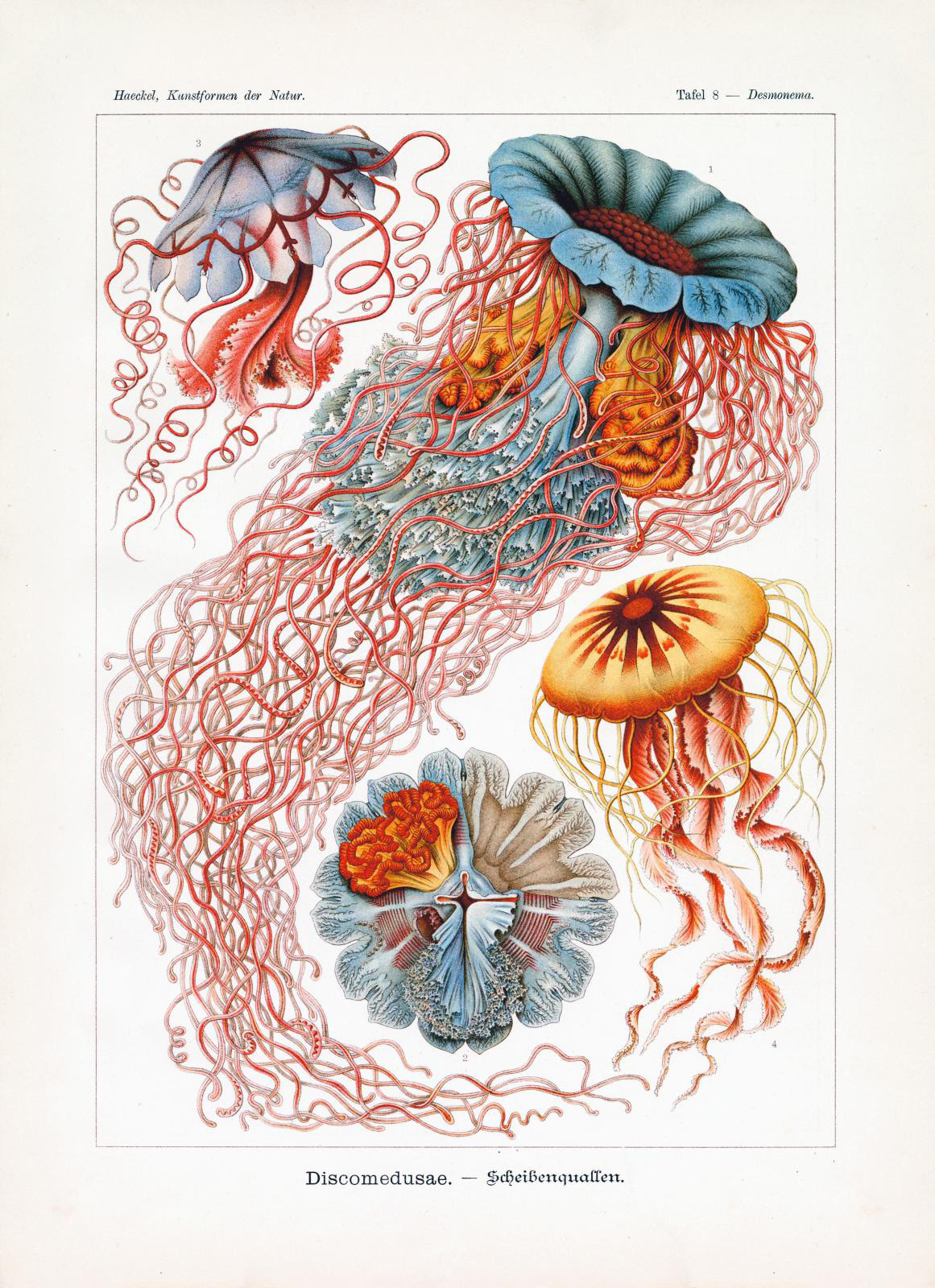 "Which style is this: enameled cooking-pot, saucepan or diving suit?" pondered the French symbolist writer Remy de Gourmont standing in the Place de la Concorde before the monumental portal of the 1900 Universal Exhibition, flanked by two "jigsaw cut phalluses". More forgiving critics evoked Byzantium, Persia and India, but far from being an Orientalist, its creator René Binet was actually inspired by the illustrations found in a scientific work for laymen, Kunstformen der Natur (Artistic Forms in Nature), published in 1904 by German zoologist Ernst Haeckel, a keen promoter of Darwin's theories in his country. "Everything is inspired by your studies, from the overall composition to the smallest detail," Binet wrote to him as the work was carried out.

Astounding Creatures in Art
With his Art Forms, Haeckel wanted to show the general public the results of half a century of publications on "the infinite realm of primary life forms living in the depths of the ocean." Particularly fascinated by "the delicate, fantastical forms" of protists—unicellular plankton organisms that are both animals and plants—he also devoted numerous studies to algae, corals and jellyfish, dubbed "mauve orchids of the sea" by Marcel Proust. Far from opposing the "creationism", which is in opposition to Darwinism in the name of the Bible, he envisaged the conception of a "Nature God" à la Spinoza: a "monistic" vision that legitimized his quasi-mystical veneration of natural forms. Attentive to the interrelations of living beings with their environment, he coined the word "ecology" in 1866 and founded the "Monist League" in 1906, which brought together socialists, theosophists, naturalists and anarchists of every persuasion.

Haeckel explored the mysteries of morphogenesis through drawing, with one eye on the microscope, the other on his paper, and the works he published served as proof. He also aimed his Art Forms "at contemporary artists and designers, who will find a host of magnificent new motifs in these true natural art forms." For his gateway, Binet was inspired by the exoskeletons of radiolarians: spheres, pyramids, cones and openwork, miniature pavilions with subtle arcades that later fascinated Buckminster Fuller in the 1950s. In 1903, as a tribute to Haeckel, Binet published his Esquisses décoratives (Decorative Sketches): designs for architecture, furniture, objects, lighting and jewelry. Émile Gallé, also an admirer of Art Forms, praised these "brave researchers who draw and publish enamels and cameos from the sea... Soon crystalline jellyfish will imbue glass chalices with new shades and curves." His vases transport us to the depths of a dreamlike sea, which spawned his famous Main aux algues (Hand with Algae) of 1904 as a final legacy. Prince Albert I of Monaco gave these dreams architectural form in his Oceanographic Museum, where flora and fauna of the deep reign triumphant. The jellyfish Rhopilema frida, named after a close friend of Haeckel's, inspired spectacular chandeliers.

The French were not the first to discover Art Forms. In 1893, Victor Horta's Tassel House (considered the first Art Nouveau structure), in Brussels, illustrated an astounding vitalism. The metal tracery of the "whiplash line" stairwell is echoed on the walls with clusters of creepers emerging from the chaos of origins vibrant with protists. In the Netherlands, architect Hendrik Petrus Berlage created various wrought-iron work lamps inspired by the organic-geometrical outlines found in Art Forms for the Amsterdam Stock Exchange (1903), an important early modern building. Like Binet, he designed wallpaper, furniture and objects, including a new avatar of Rhopilema frida. Further Haeckelian chandeliers were created by Michel de Klerk in the Scheepvaarthuis (Shipping House) in 1916, with jellyfish and octopuses invading the venue. But the place where the scientist had the greatest impact was his own country, especially in Munich, where a dynamic Jugendstil (the German counterpart of Art Nouveau) was developing with August Endell and Hermann Obrist. Inspired by Haeckelian morphogenetics, they only retained the elements of rhythm, force and movement from nature: a vision in line with Henry Van de Velde's "dynamographism". Abstract forms enlivened Obrist's embroideries and fountains, sprouted like tumors from Endell's furniture and transformed his Elvira studio, sporting a monster of the deep on its facade, into an aquarium with frenetically energetic, organic ornamental tracery work.

Describing Science; Dreaming of the Future
Considering this success, we might wonder if these "art forms" were as natural as they claimed to be. Although he stated in his preface that he had "limited himself to the faithful reproduction of reality", and refrained from "any stylistic interpretation or decorative use", did Haeckel and his lithographer Adolf Giltsch inadvertently "artified" these forms attributed to Mother Nature in Jugendstil or Art Nouveau style? Closer examination of the scientific images' transformation into lithographs, and the principle of the plates, which standardized highly diverse images, might suggest this. Inevitably, everything is seen through the eyes of that period. In the 1990s, the rise of computer design and 3D modeling gave new life to the discoverer of natural microstructures. When digitized, Andrei Jipa's Haeckelian radiolarians take on the appearance of UFOs. Ceramist Arnold Arnen gives shape to them in porcelain, while the Bernota Studio makes them shine out in the half-light of ceilings: "Are they bacteria, plankton, seeds or possibly planets?" More lamps turn up with Timothy Horn, who pays tribute in turn to Rhopilema frida, with silicone rubber giving it a mysterious luminescence. Régis Mathieu treats it with more nobility: gilt bronze, crystal and precious stones illustrate skills also found in his sea urchins, corals and luminous cirripedes inspired by Art Forms in Nature.

Micro-Algae and Biodesign
Has the fashion world been invaded by the Haeckelian virus? Inspired by biomorphism, Iris Van Herpen proposed her crystalline reveries to Björk (Biophilia) before teaming up with biodesigner Julia Koerner for their first 3D-printed collection: Hybrid Holism, whose models imprisoned in insect carapaces seem to emerge from a Kafkaesque metamorphosis. The model Odontella received gentler treatment, with Aurita, a micro-algae beloved by today's vegetarians, spreading like honey in supple swirls over the model's naked body. Julia Koerner carried on with her Venus Dress from the Porifera collection (a Metazoan sponge) and Radiolaria tutu, originally designed for dancer Ros Warby, but also doubling as a sculpture for the home.

But the recent problems of biodiversity and climate change will make a new guru of the "inventor of ecology". Community platforms like the Mediamatic "biotope" in the port of Amsterdam provide introductory workshops on responsible new technologies, as well as an organic restaurant. In their exhibitions, Ernst Haeckel's plates, over six and a half feet long, have an iconic dimension. Alexandra Daisy Ginsberg's more ambiguous Growth Assembly project flirts with GMOs and transhumanism, imagining a future where techno-plants become "designers" of objects, like a disturbing weed killer intended for industrial agriculture. Sascha Pohflepp's provocative, humorous illustrations parody those of Art Forms. If there were any doubt about the German naturalist's current success, the online proliferation of Haeckelian t-shirts, jeans, fabrics, mugs, jewelry, watches and even tattoos would be proof enough.

The Decorative Arts According to Majorelle, Arman and Van der Meeren
Newsfeed
See all news
Louvre Museum Opens Le Studio in October, A Place Dedicated to Exchange
UNESCO Announced the Return of the Gilgamesh Tablet to Iraq This Thursday
"Œuvres Choisies" Exhibition Ushers In the New Auction Season at Drouot
RER C Train Will Transport You to the Paris City Museums
Not to be missed
Analyses
Collecting Art: Morozov and the Russian Art Connoiss…
On display at the Louis Vuitton Foundation in Paris this fall, the Morozov…
Analyses
Great British Painter: Dame Laura Knight
From arguing for women to be included in life drawing sessions at…
Analyses
Recreating Cosquer Cave: An Underwater Archaeological…
Part of the paintings designed to adorn a replica of the Cosquer…
Analyses
In the Crosshairs: Luma Arles Cultural Center
There is nothing quite like the Arles cultural center, an offshoot…