District 13 at Drouot, Two Fairs for the Price of One!

Deprived of the fair in 2020 and 2021, art lovers can look forward to the second edition of District 13 this year, which is refocusing on French galleries and is once again being held at the Hôtel Drouot from September 15-18. 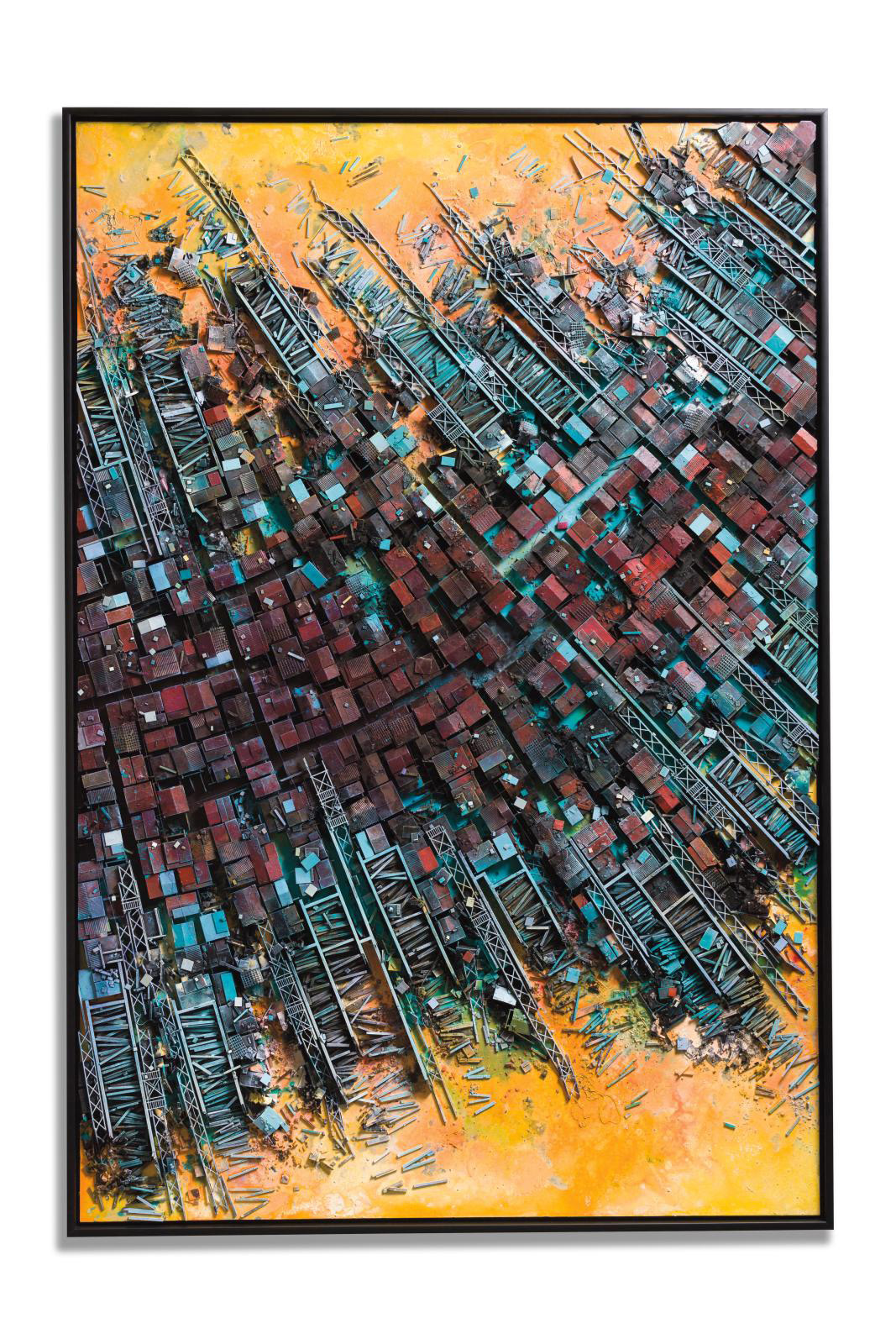 A fair twice a year? And why not! This is District 13's schedule for 2022. After having made an appearance in January, during a break in the auction calendar at the Hotel Drouot, the event dedicated to urban art returns in force this September. What was then an emergency solution to revive the fair that could not be held for two years due to Covid and forced cancelations could become permanent. There are rumors of a possible biannual schedule... But for now, it is a matter of finding its regular slot since 2018. District 13 marks its fourth edition with a poster featuring trash punk imagery created by the British artist Dface—of which 300 copies of a silkscreen print will be sold on-site—and with its selection of thirty exhibitors (twenty-nine galleries and one publishing house, Albin Michel) who are mostly French, yet presenting atypical artists. Of note is the Naga Collectivo collective, a non-profit organization created in 2022 whose goal is to raise funds to develop a cultural and social program, the Art'Murs association founded in 2018 (which promotes the works of Alberto Ruce, Carole b, L7Matrix and Primal) and the Street Art Photo Project, which publishes in situ artworks through photography.

Regulars and Newcomers
The auction house can accommodate thirty-six stands, but some galleries are presenting such a large selection that they occupy several spaces, which is the case for Wallworks, Mazel and Chenus Longhi. The latter joined the fair this year with "a whole room to ourselves", as gallery co-director, Nicolas Chenus, explains. Created ten years ago, the gallery has "recently changed its name—it was previously called "Openspace"—, and we are giving it a new direction by emancipating ourselves somewhat from urban art. However, the anchor remains and the page cannot be completely turned: "We will present two solo shows by Eric Lacan and Mist, as well as a selection of works by artists from the gallery: Augustine Kofie, Dan Rawlings, Rouge Hartley and Rafael Gerlach. Finally, part of our booth will be dedicated to our second market program "(re)collections". We will be presenting historic and/or important works from private collections." Among the newcomers to this second 2022 edition (ten in all) are Akutiga, an online gallery, Caillebotteri, which operates out of an apartment, and especially Stick Together, a structure dedicated primarily to the promotion of Dutch artist Max Zorn. The person in charge of Stick Together, Audrey Sykes, is enthusiastic about this first participation for a specific reason: "We have had great success with auctions of works by Max Zorn at Drouot in recent years." She is referring to two works in particular. Sold on May 10, Lost in Clouds went for €9,100 and on June 22, 2020, Days Like Leaves on a River fetched €10,400. This last work is very surprising since it consists of superimpositions of brown packing tape cut with a cutter, worked with such dexterity that one forgets what the raw material is. "Zorn will be on hand at the booth to create artwork live during the week so that visitors can understand the process of creating with this medium," adds Sykes. In the booth, prices will range from €500 to €7,500—depending on size, detail and uniqueness—and Sykes is confident: "This will be the first time Zorn has exhibited, since the solo show at Scope Miami in 2019, where he sold out!"

Collector's Paradise
For this edition, Claude Kunetz, of the Wallworks Gallery, might also replicate such success for works by Hendrik Czakainski. Kunetz had sold no less than twelve pieces in January, and returns with these eagerly anticipated works depicting imaginary city plans covered with a veil of shaded colors (between €6,000 and €17,000). The dealer says: "The most important thing for a gallery when it participates in a fair is to meet new collectors. At Drouot, during District 13, this is exactly what happens, a real breeding ground for new faces! In every sense of the word! In January 2022, the sales results were very positive with over 50% of new collectors." Bertrand Coustou of the Bahía Utópica Gallery in Valparaiso, who will be participating in District 13 for the third time, agrees: "We had huge success with two artists that we are presenting again this year, Lobsang Durney and JP Neira. Among the latter's works is Cocinera, in which the artist references the history of classical art, through Vermeer, to ironically criticize speculation in the contemporary art market, and using two Andy Warhol images while nodding to Banksy's famous auction." Mazel Gallery is once again playing the game of objects found at auction and diverted, with Levalet and Martin Whatson (€3,500 to €11,000), who seduced collectors in January, while Bruno Maître, of Lavo//Matik, dedicates his stand to two artist friends, Rnest and Stéphane Moscato (between €1,000 and €6,000). He has also postponed the exhibition he had planned for the first in his gallery in the 13th arrondissement in order to showcase his works at Drouot.

Discoveries and Performances
Also riding the wave of January's success, Nadège Buffe, of the Taglialatella Gallery, unveils "the latest works of Lucas Ribeyron, who continues his exploration of urban parks. Using his video surveillance camera captures and reproduces urban scenes with a distorted reality, the artist reappropriates the contemporary obsession with the image and injects it into his painting, questioning the place of the individual and its representation. The faithful will certainly fall for Mat x Zekky's latest series, "Entropia", a work about myth, which reminds us that every cataclysm comes from a life force and energy. Geoffroy Jossaume, from the GCA Gallery, is betting on discovery for the French public, with German hyper-realist painter, Matthias Mross, and the French artist Flog, whom he presented with his very first exhibition in June in Paris, and whose twenty or so works were sold in 36 hours! Prices will have gone up by about 15% for the fair, between €2,700 and €4,000. "There is a crazy demand for his work, I have never seen that in eight years of gallery work!" exclaims the dealer.

Auction Sales
Throughout the fair, UnKolorDustinto, Étienne Cristoffanini, Mon Laferte, Mr. Cenz, Flog, Brusk, R. Nuage, Jean Jam, Lady K, Sun7, Chanoir and Kouka will perform live on the walls of the interior shipping area of the Hôtel Drouot. The auction will also take place this year on Saturday at 3 pm, instead of the traditional end of the fair, Sunday, timeslot. Another new feature: access to this sale will be by invitation only and will disperse some thirty lots, including Maye's Plus loin que l'horizon (2016) (€30,000/40,000), "an artist who is much talked about at the moment," notes Geoffroy Jossaume, who has taken up his expert's hat for the occasion, Dead Zone: Phase (2010), by Speedy Graphito (€10,000/15,000) and a stencil matrix on paper by Shepard Fairey from 2020, which is a unique piece and not an edition (€20,000/30,000).