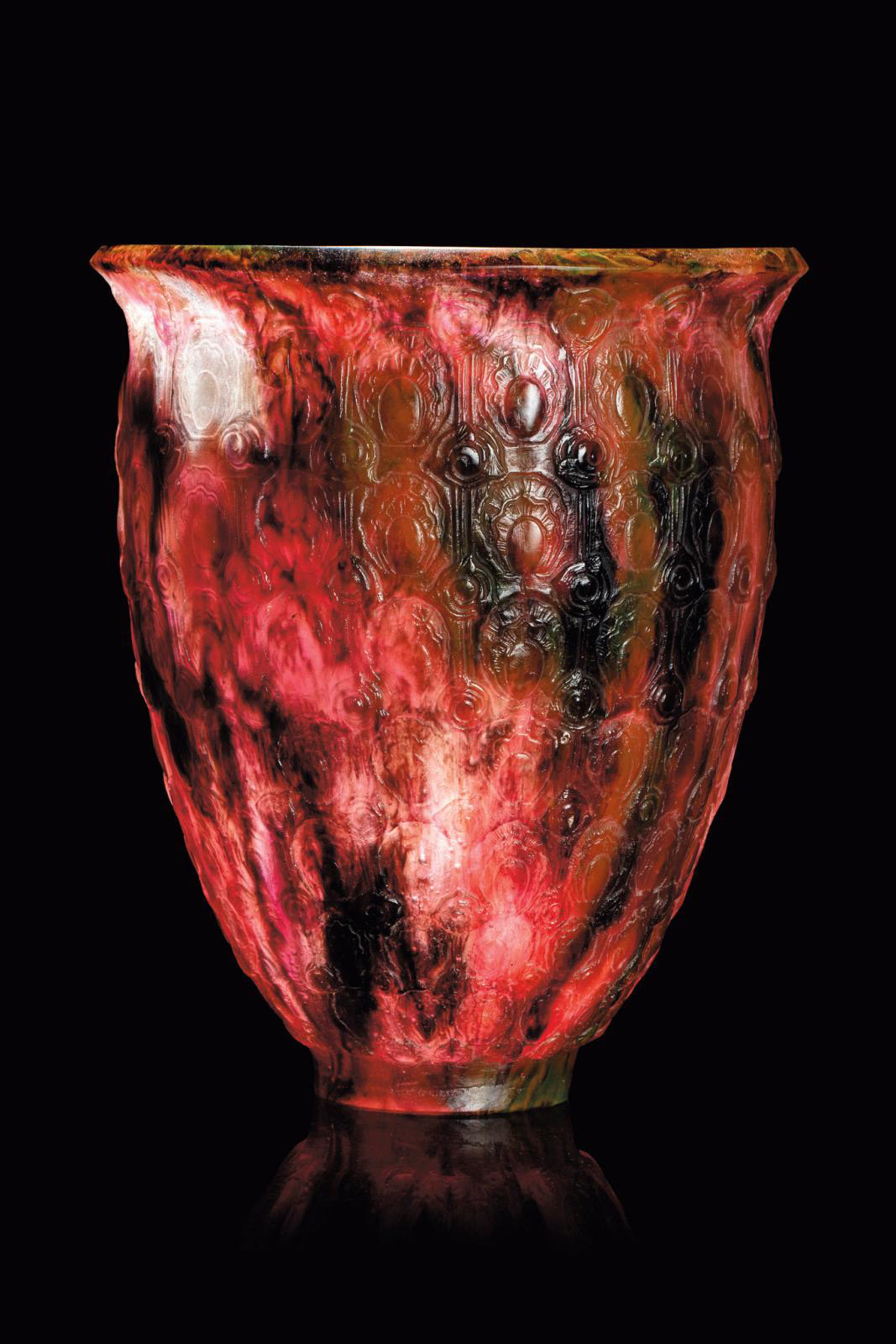 By collecting glass, enameled glassware, stoneware and Sèvres ceramics, Senator Paulin Daudé (1862-1928) demonstrated his eclectic, avant-garde spirit. The results did justice to his choices, which have been out of sight for nearly a century. Two large pâte de verre vases made by François-Émile Decorchemont in 1920 and 1921 fetched €78,000 and €76,700, respectively, a world record for the artist (source: Artnet) and the sale’s second-highest price. One is reproduced here. The other, Vipères, was the focus of an article in La Gazette.

Paulin’s fascination with pieces by Decorchemont is easy to understand. After switching from painting to glassmaking, Decorchemont was staunchly committed to pâte de verre and its vibrant texture. The first time he exhibited works in the new medium was at the 1912 Salon des Artistes Décorateurs. This was the culmination of his research on developing a thick, translucent material with sculptural effects to highlight the shapes and ornament better. A century later, it still arouses the same enthusiasm.

The collection was also honored with four preemptions. The Metropolitan Area of Rouen acquired a circular bowl with side handles formed of smiling masks (dia. 13 cm/5.12 in) for €7,800 and an ovoid piece on a base featuring butterflies in flight at night for €3,900. The Paris Musée des Arts Décoratifs purchased a large bowl with two snake handles (€12,480) and the Musée du Verre of Conches a bottle featuring floral decoration with penetrating blue and orange contrasts (h. 33 cm/13 in.) for €39,000.

In the equally demanding field of ceramics, an important green and black enameled stoneware jardinière with oxblood nuances, decorated in high relief with a crab amid seaweed and rocks (31.5 x 65 x 45 cm/12.41 x 25.6 x 25.6 in) made by Pierre-Adrien Dalpayrat (1844-1910) around 1900, fetched €71,500, the ceramist’s second-highest price. The surprise came from a large ovoid lidded vase on a pedestal in Parisian porcelain painted with a nymph and cherubs and mounted in gilt bronze (h. 125 cm/49.22 in). It sold for €58,500, much more than its modest estimate.