Between novels, the son of the famous interior designer Andrée Putman and ex-husband and colleague of Almine Rech has launched an online art gallery. At the Café de Flore, his Paris HQ, we met the gallery owner who has chosen Arles as his adoption city. 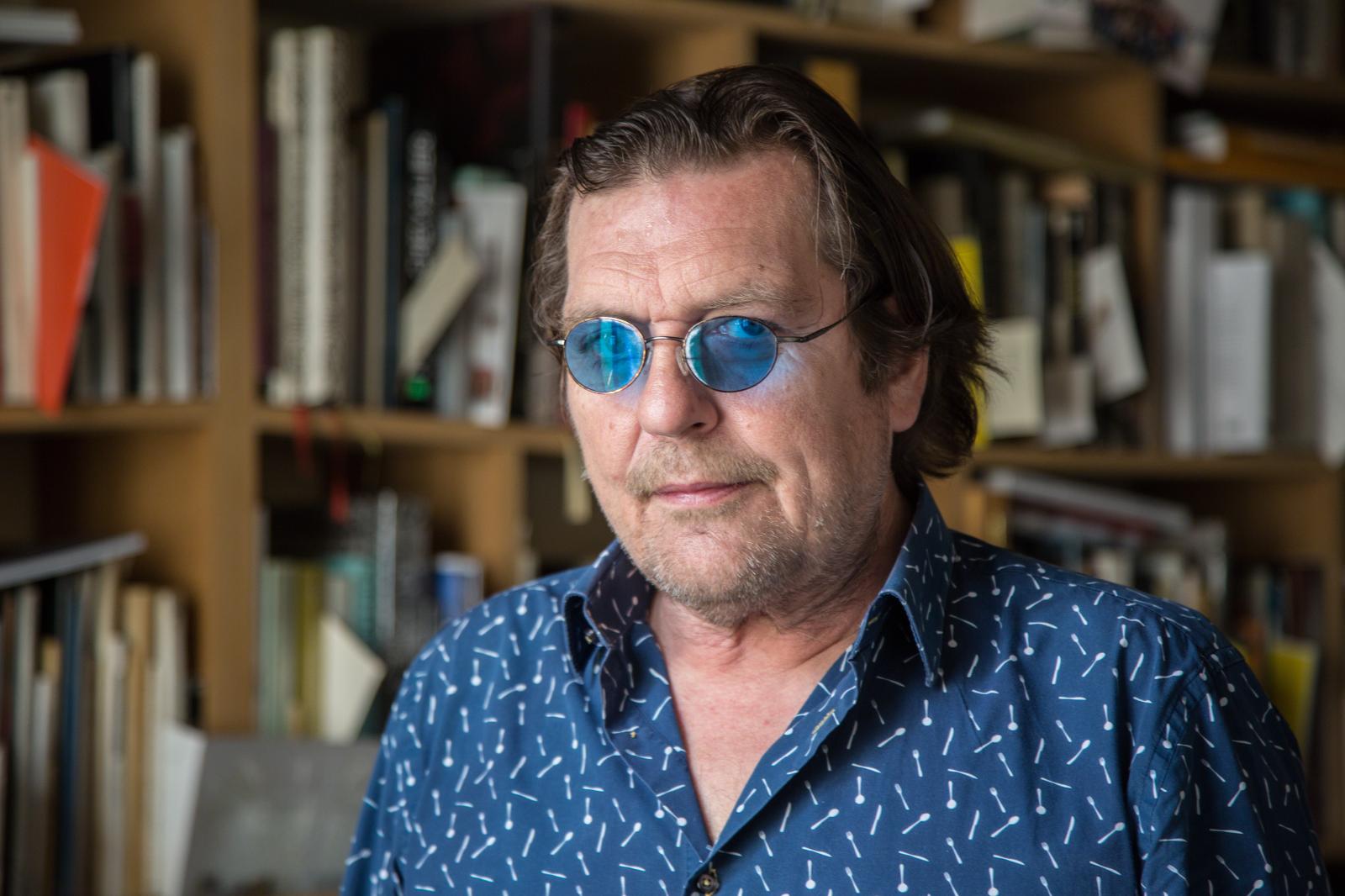 Your first experience as a gallery owner goes back to the 1980s: when you were barely 25, you staged exhibitions in your two-room New York apartment… What are your memories of them?
I was lucky enough to live in 57th street, the same as the Fuller Building, which housed some major dealers, including Pierre Matisse. So I was incredibly well placed, which made up for my tiny space. When I wanted to stage an exhibition, I had to move my bed! I made no money, but it didn't cost me anything, either. That's where I met Jean-Michel Basquiat and Keith Haring. Haring had a 1,500-m2 studio, all in one piece, on West Broadway. It was a highly-charged period, very "funky New York" (I have to say we were really into drugs!), but at the same time, we lived in terrible anxiety: crossing off another AIDS victim every week in your address book was rather like living through the Black Death.

Is that where you felt the call to be an art dealer?
Not really. I was born into the world of art: it's my natural habitat. Everything followed on like clockwork: I met Almine Rech; we decided to open a gallery (Froment-Putman – Ed.) and that lasted nearly ten years, from 1989 to 1997.

Has the profession changed a lot since the 1990s?
There's no comparison. Everything is such a burden financially that there's no longer any room for spontaneity. James Turrell and Roman Opalka, with whom I worked, stood out for a freedom of spirit that is totally lacking nowadays. Artists have become little businesspeople who only think about money, first of all – then, if there's time, maybe you can talk about art for ten minutes...

And yet, when we read your autobiographical novel Premières pressions à froid, in which you describe the craze for contemporary art in the early Nineties, with escalating prices, and then the problems encountered by galleries, including yours, when the speculative bubble burst, it seems as though things haven't really changed – on the contrary...
It's true, we were living constantly on the edge. Luckily, we sold a James Turrell from time to time at FF500,000! At Art Basel – the overall expense was FF150,000 at the time –, the aim was to cover your costs. Today, Almine Rech makes forty thousand in four days. That’s what's changed: the scale.

You have now started up an online gallery. Why did you decide to do this?
It really cuts my expenditure! To organise a temporary exhibition, you just need ten photos. No need for transport or insurance. And you don't have to stick a thousand invitations in envelopes for the preview. The way it simplifies things is amazing. The site only needed €17,000 for its design.

Online art is a highly competitive sector, and its growth has stagnated in the last three years. Do think it has a future?
I think that people who say that it will never work are mistaken. As witness the fact that the site went online on 20 January, relatively quietly, and we are already up to 60 purchases. I'm confident. You know, I'm lucky enough to have a good network; I'm not just starting out. The whole thing is to maintain high standards. What interests me is keeping the old gallery system and seeing how we can apply it to new technologies. Why can't we transpose the same values as elsewhere – quality, honesty, conviction and hard work – to the Internet?

What about the social media?
I mainly use Instagram. I buy things there which are very successful. And I publish a bit on Facebook: 30% of our traffic comes from there.

Tell us about your "stable"...
For the moment, the shop offers 90 pieces. Prices range from a few hundred euros to €100,000 – mainly for major Raymond Hains, which I've produced myself. Above €3,500, people need to contact us. All the artists I've approached have replied positively. We've got Fabrice Hyber, whom I met when he was a student at the Fine Arts School in Nantes, and I also have plans to collaborate with Didier Marcel. The programme develops as it goes along. The site will inspire me to initiate editions; I've just done one with Bertrand Lavier. I've always found it fascinating to bring very varied professions together around an objet d'art. I also plan to give curators a free hand. Overall, the work remains the same, but without any of the crates, the pain or the fairs. We are in a short circuit.

The democratisation of art is one of the arguments put forward for online selling: do you believe that?
No! For that to be true, artists would have to put themselves at the same level as the great majority of people, and that would be very bad for art.

Have you kept any works from your former contemporary art collection, sold with Francis Briest (Paris) in 2000?
Almost nothing, but I've started again since! I still regret selling certain pieces, like a sublime work by Huang Yong Ping, which was shown during "Magiciens de la terre" (exhibition at the Centre Pompidou in 1989 – Ed.), and "Allez les verts" by Erik Dietman. Today, I spend at least €500 a month on art. My latest addition is a work by Michel Houssin, a former teacher at the Villa Arson, whose figurative drawings verge on abstraction.

Your father, the art publisher Jacques Putman, would have given anything for a Pierre Bonnard. What about you?
I can still hear him saying: "If you continue to piss me off, I'll sell everything, I'll buy a Bonnard and I'll go to a hotel." He was a real laugh, my father. Yes, I love Bonnard as well. But if I had to choose, I'd go for a painting by Opalka.

Has the fame of your parents helped you?
My parents weren't famous! My mother, Andrée Putman, began her career very late on, when she was 60. And my father was just the publisher of Bram Van Velde. On the other hand, art was his whole life. When Bram was finally given an exhibition at Beaubourg, they had to call an ambulance, because he was so overcome with emotion. My father was inhabited by this sort of "Flying Dutchman"; he ended up living with us. We picked him up from one day to the next, when he was 75. Bram was living with the painter Madeleine Spierer, the sister-in-law of the art dealer Krugier. At that time, she didn't want to take care of him any more. We dropped by to say hello and he came home with us! Bram was absolutely useless at everyday stuff. My sister Olivia and I had to explain everything to him.

And the tiebreaker: why the superhero logo?
Very simply because Putman rhymes with Batman! An excellent idea from our graphic artist, Fabien Seignobos.

Newsfeed
See all news
Is Battersea Power Station Now a Playground for the Super Rich?
Colorado Artists Unite to Advocate for Missing and Murdered Indigenous People
Tourist Denied A With Meeting Pope Francis Smashes 2 Antique Statues
Digital Illustrator, Grzegorz Rutkowski, is Bigger Than Picasso on AI Platforms
Not to be missed
Interviews