Impressive automobiles hold no secrets for him. Simon Kidston, a charismatic figure in the classic car world, divides his time between London, Geneva and Dubai. 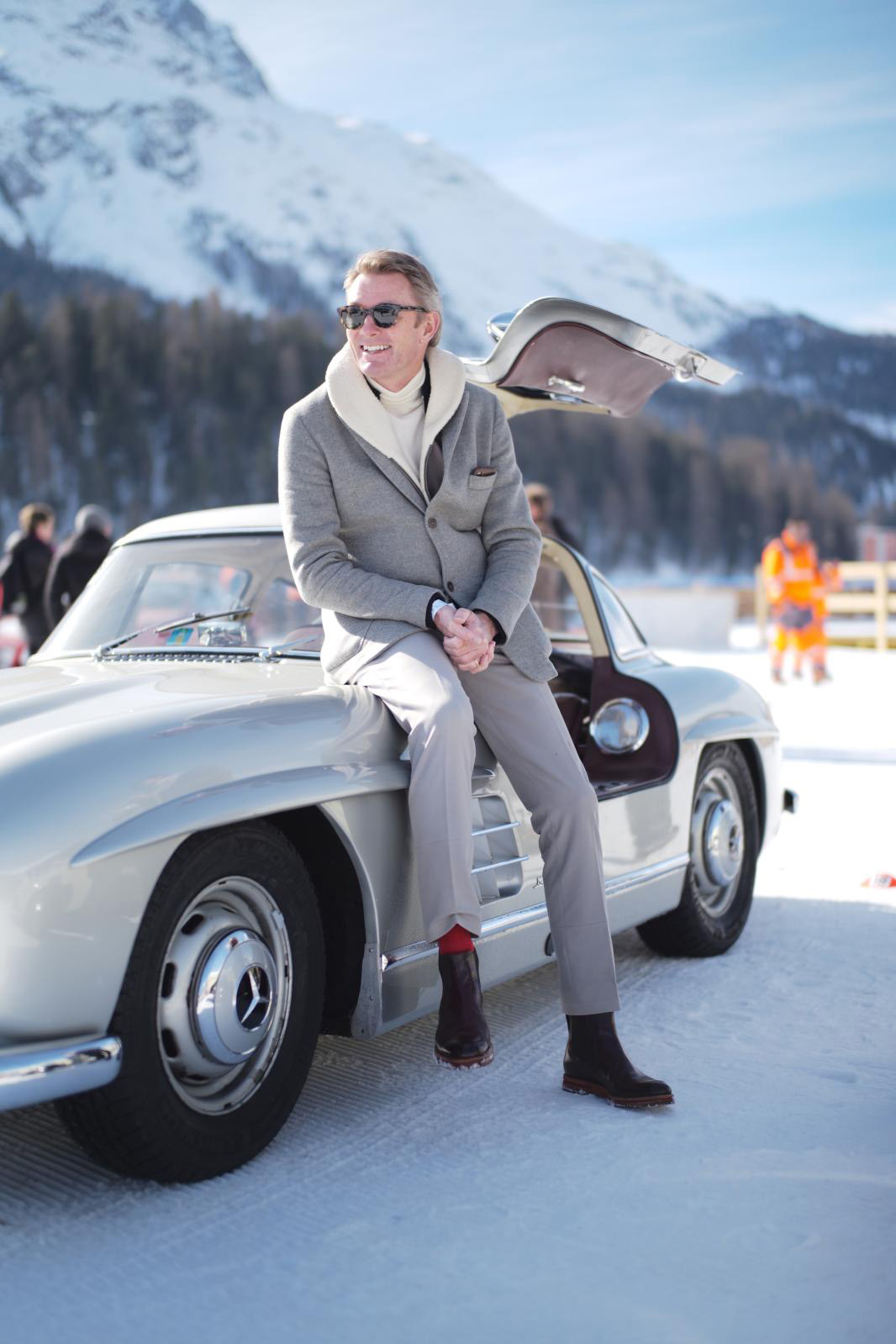 A legendary car: Simon Kidston and his Mercedes 300 SL Gullwing from 1955 during the concours d'élégance The Ice at St-Moritz in 2020.
Courtesy Kidston SA

A legendary car: Simon Kidston and his Mercedes 300 SL Gullwing from 1955 during the concours d'élégance The Ice at St-Moritz in 2020.
Courtesy Kidston SA

Some of the world's most splendid cars pass through his hands. Over the past 30 years, Simon Kidston has built up an unrivaled reputation in the world of classic automobiles. An advisor to leading collectors, this heir to a family of British officers with a passion for cars in their blood has irons in many fires, including tailor-made transactions for discerning buyers, restoration and expertise, the launch of the LastBid auction site and the K500 index. All projects united under the banner of Kidston SA, his Geneva-based consulting company created in 2006, which opened a branch in Dubai four years ago. With palpable passion and a touch of British humor, he gives us his informed views on the future of the classic car.

Where does this great love of classic cars come from?
I come from a family for whom cars were a hobby, but no one did business in them. My father talked a lot about racing cars when I was a child and I read his magazines, which piqued my interest. After I left school, I was given a small sum to buy my first car. I had no intention of getting a classic—my father had a used Renault 5 in mind—but when I looked in the magazines, I saw you could buy an old Aston Martin for the same price. After further research, I realized that when you're 17, the insurance on the Aston Martin costs three times the price of the car. So that was no go. But the seed was sown.

How did your career start?
I learned a lot about cars just by fantasizing about all the ones I wanted to buy or drive. When I left university, I wanted to work in the classic car world. So I sent my very short resumé to garages and auction houses—with no luck, inevitably. Then one day I received a call from my cousin, a banker in London. He had spotted a classic car showroom where a job had just opened up. They gave me a test and asked me to identify the cars on display, and we finished the interview in the pub. It was in the bag. I returned to Italy where I was living at the time to pack some things into my Alfa Romeo Spider and drove from Siena to London. The three-month trial turned into an eight-year experience. As I also speak French and Italian, I developed a European client portfolio. I then co-founded the Brooks Europe auction house in Geneva, which later became Bonhams Europe, and ran it for ten years before starting my own business in 2006.

What is your collection like?
Actually, I never meant to build a collection. They are just cars that I love and care about. My very first was a Fiat 500, which I learned to drive like most people do in Italy. Then the Spider, when I was 19. My first real classic car was a 1960 Alfa Romeo Giulietta, which I bought in 1992. And my first major purchase was a Lamborghini Miura SV in 1996. Two years later I bought another Miura SV, which I still have today and I think is my favorite car. Miuras are my great love. I published a book about them in 2020. I can also mention the 1973 Porsche Carrera RS that my father bought new and which I've kept. I still remember when he used to take me to school in it. It has a bright yellow body with orange highlights.

Do you restore your cars yourself?
I wouldn't know how, but I like to do research, and discover their hidden history. I like restoring neglected or badly restored cars, dismantling them and then reassembling them from scratch, like new. There is something fascinating and rewarding about giving new life to a car whose true face has been concealed for generations. If you have help from good specialists—and I'm fortunate in this respect—you can return it to its original condition. You restore history to its rightful place, in a way.

You talk about restoring cars as one would restore objets d’art... Are your collectors also art lovers?
Not necessarily; I'd say they are more admirers of "mechanical wonders". Some of them also like watches. I think they are mostly fascinated by engineering and design. Often collectors are motivated by something rooted in childhood. They remember all the things they dreamed about when they were young, which they couldn't treat themselves to. Maybe they saw them in a magazine; maybe they glued their noses to showroom windows. These are the seeds of a passion.

The car's place in society has changed a lot. Is the love affair as strong as ever?
I think it would be naïve not to admit that society has changed its perception of the automobile at a time when environmental concerns are dominant. In addition, technology has changed the way we use the car. For the younger generation, they are no longer goods but a service. For the older generation, buying a car meant freedom. It was a way to create social links and travel. Today, people socialize online. Nevertheless, I believe that the car as a cultural artifact has a unique place in history. It has fundamentally changed the way our society functions.

Given these upheavals, has collectors' taste changed?
Will collectors have the same vision of the car a century from now? I don't know. But there is no doubt that taste is changing, just as it has with wine, watches and art. Today, people collect more recent cars. Like contemporary art, which sometimes overshadows Old Masters. A work of undeniable historical importance, even if it is not fashionable, will always break records, like the Salvator Mundi. It's the same with cars. When a great Bugatti from the 1920s or 1930s resurfaces in a sale, it can fetch a price that will outshine any car built in the last 20 or 30 years. Anything that starts out as exceptional will remain exceptional. But just because it's old doesn't necessarily make it great.

What are your collectors looking for when they buy a car?
First and foremost, aesthetics. As when two people meet, the first spark often comes from visual fascination. Then there's the name. Makes that still exist today, like Ferrari, Lamborghini, Rolls-Royce and Bentley, sell better than even very interesting makes that have disappeared, like Hispano-Suiza. Then comes the quality of the craftsmanship and the sophistication of the mechanics. And of course, there's the history. A few years ago, a car owned by Steve McQueen sold for $10 million, while the same car without the name and the legend behind it would have gone for a quarter of the price. With racing cars, winning a competition like Le Mans will increase the value considerably. On the other hand, practicality is not a major criterion. Which is ironic, because designers did everything they could to make them quiet. And today, collectors mostly hope they make a lot of noise!