The Hôtel Drouot welcomes visitors to the new installment of its regular collegial exhibition, known as the “Œuvres Choisies” (“Selected Works”). The exhibition presents some of the most exciting works to come up for sale in the upcoming months. 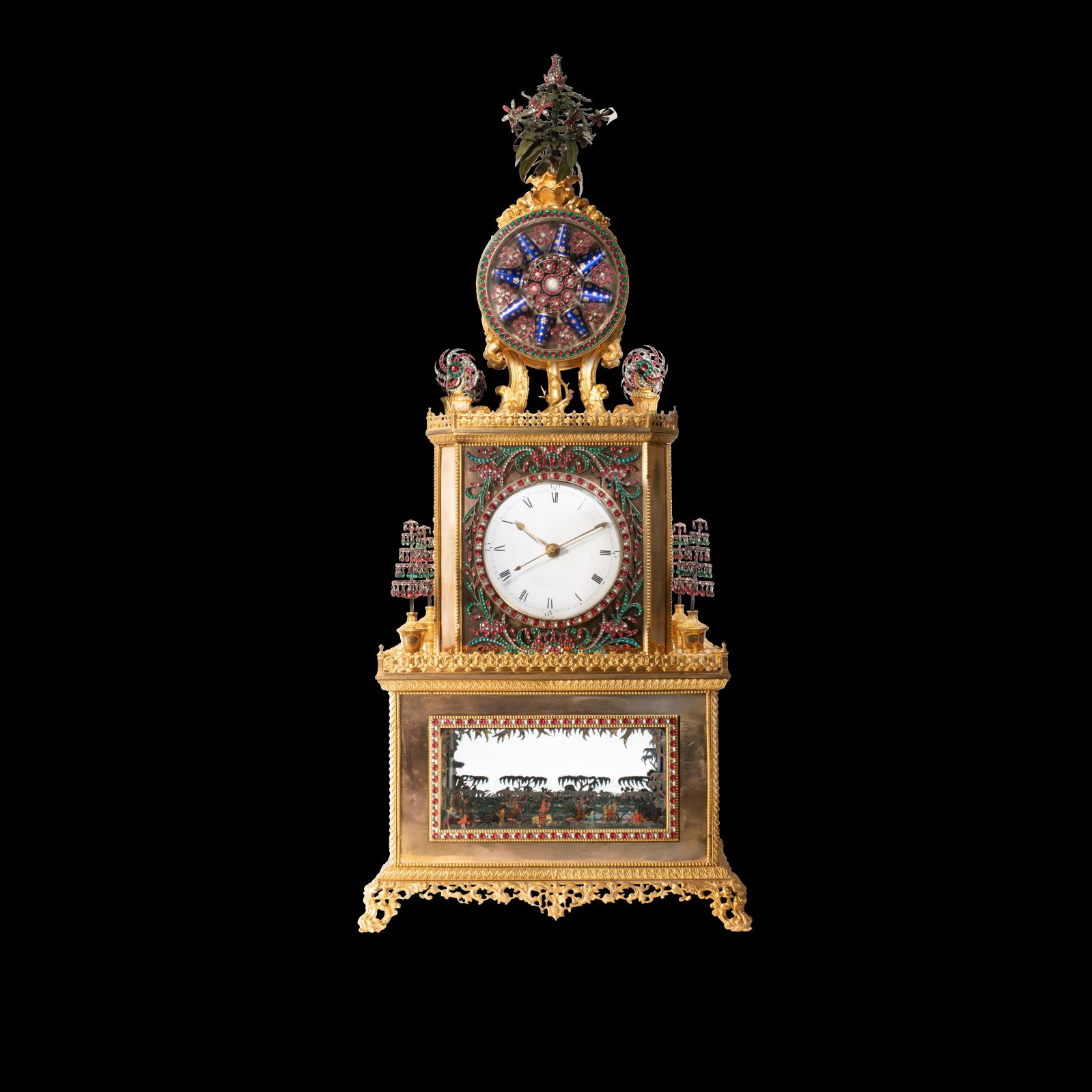 This installment of the “Œuvres Choisies” exhibition brings together a remarkable group of objects in different media and from a variety of cultures that are certain to delight visitors with their beauty and historical resonance. Upon entry, one is immediately drawn to the rare automaton clock from China dating back to the Qianlong Era (1736-1795). The gilded bronze surfaces of the clock’s three tiers are richly ornamented with stone inlays that feature vegetal, animal, and architectural details and multi-figure compositions. Tree and wheel-like elements in translucent colored glass provide additional decoration and add playfulness and dynamism to the clock’s automations that are activated on the hour (or on demand by a dedicated button). The movement of figurines and ornamental elements is accompanied by music, with a choice of three melodies controlled by a button. This clock is a part of the legacy of the so-called “clock diplomacy”—the practice by Jesuit missionaries to gift elaborate Western timepieces to Chinese dignitaries in order to build a relationship with the imperial court and gain influence. The Kangxi Emperor (1654-1772), who became particularly interested in Western science, used imported clocks to study modern European technology. He established a clock- and watch-making workshop in the Forbidden City and recruited skilled craftsmen from all over the country to be trained by the Swiss-born missionary François-Louis Stadlin (1658-1740). Kangxi’s grandson, who ruled as the Qianlong Emperor (1711-1799) shared this passion for Western clocks, sparing no effort to collect all kinds of rare and innovative timepieces. According to the missionary Valentin Chalier (1697-1747), at the beginning of Qianlong’s reign, there were already more than 400 automatic clocks in the imperial court and the sound of these clocks could be heard in every palace in the Forbidden City. In addition to continuing the import of Western clocks, Qianlong also supported the development of the clock industry in Guangzhou (also known as Canton), which quickly became the center of Chinese mechanical clock-making, with its works rivaling the quality and elaborate decoration of European productions. The clock in the “Œuvres Choisies” is one of the masterpieces of Guangzhou’s eighteenth-century craftsmen.

The exhibition is also rich with important examples of decorative arts and furniture. Among several marvelous objects from the Sèvres Manufacture, there is an exceptional pair of porcelain polychrome vases in the shape of Etruscan carafes. Each features a medallion with portraits of Raphael and Balthazar Castiglione, modeled after Raphael’s paintings created between 1518 and 1519 that are now in the Louvre. Following the exhibition at the Louvre on January 1, 1820, the vases were purchased by Louis-Antoine d’Artois, Duke of Angoulême (1775-1844)—the oldest son of Charles X and the last Dauphin of France. Strasburg’s Manufacture of Paul Hannong is represented by a pair of rare covered earthenware terrines in the shape of pheasants. Delicately painted in natural tones of red-brown and beige, these exceptional objects were likely made for the Rastatt Favorite Palace (Schloss Favorite Rastatt) in Baden-Württemberg, Germany—the splendid Baroque summer residence and hunting lodge built between 1710 and 1727 for the young Margravine Sibylla Augusta of Baden-Baden (1675-1733). Mid-century furniture is represented by a spectacular set of armchairs by Gio Ponti (1891-1979) and an important “Trapèze” table by Jean Prouvé (1901-1984). Based on the design from 1952, this table, of which two are up for sale, was made in 1956 for the Jean Zay University Residence in Antony—an ambitious post-war building project that aimed to respond to the shortage in student housing and serve as a model for all future university residences. Identical tables are now in the collections of the Center Pompidou and the Musée des Arts Décoratifs in Paris.

Among the many remarkable paintings on view is a pair of recently rediscovered paintings by Christian Wilhelm Ernst Dietrich (1712-1774), Joseph Recounting His Dreams (Joseph racontant ses songes) and Joseph’s Tunic Brought to Jacob (La tunique de Joseph portée à Jacob). These mature works by the great Dresden painter show a strong influence by Rembrandt and appear to be inspired by the Dutch master’s engravings of the same subject now in the Louvre. In 1781, the paintings were given to Louis Auguste Le Tonnelier, Baron de Breteuil (1730-1807) by Frederick Augustus of Saxony, elector and later king of Saxony (1750-1827) on the occasion of the peace treaty of Teschen, which baron de Breteuil helped to mediate as the French ambassador in Vienna. The gift also included an opulent table by Johann Christian Neuber (1736-1808), now in the Louvre. The stunning Louis XVI period frames of Dietrich’s paintings, gilded with three different shades of gold, were meant to match the ornamentation of the table. Seized during the Revolution, the paintings were returned in 1820 to Angélique Élisabeth, countess of Goyon-Matignon (1757-1833), baron de Breteuil’s only daughter. They have remained in the family until now. Baron de Breteuil’s likeness is situated next to Dietrich’s paintings in the remarkable bust-length portrait by Jean-Laurent Mosnier (1743-1808). The work resembles the famous full-length portrait of Baron de Breteuil, presented by Mosnier at the Salon in 1787, now held by the Louvre. While the two works are remarkably similar in the subject’s pose, expression, and attire, the Drouot portrait shows Baron de Breteuil against a plain dark background that creates a sharp contrast with the vibrant hues used for the sitter’s face and multiple military honors. It should be noted that the elegantly decorated sword, held by Baron de Breteuil in the Louvre portrait, is also on view.

Among other highlights are the multiple Surrealist objects and paintings. The subject of the current exhibition at the Musée d’Art Moderne de Paris, Marie Cerminova, better known as Toyen (1902-1980), is represented by her 1957 painting Il s’anime. Oscar Dominguez’s (1906-1957) Americana from c. 1943 is cheekily signed with Yves Tanguy’s name, representing a common surrealist practice of affixing a signature that does not correspond to that of the author of the work. This “usurping” gesture serves as a kind of “collective game” between the artist, whose signature is used for the work, and the one who executes the work. Among several works by Man Ray (1890-1976) on view in the “Œuvres Choisies” is a delightful assemblage Pêchage. Originally made in 1969, this work is a part of the 1972 edition that includes nine copies and three artist’s proofs. As has come to be expected, this installment of the “Œuvres Choisies” exhibition gathers art, design and historical ephemera that span the centuries. Visually stunning, these objects will delight with the diversity of historical references, bridging continents, cultures, and generations of art patrons and collectors.