Founded on the cornerstones of cultural heritage, the art of gardens and contemporary art, the Chaumont-sur-Loire estate continues to write its story with the opening of a hotel combined with a think tank. 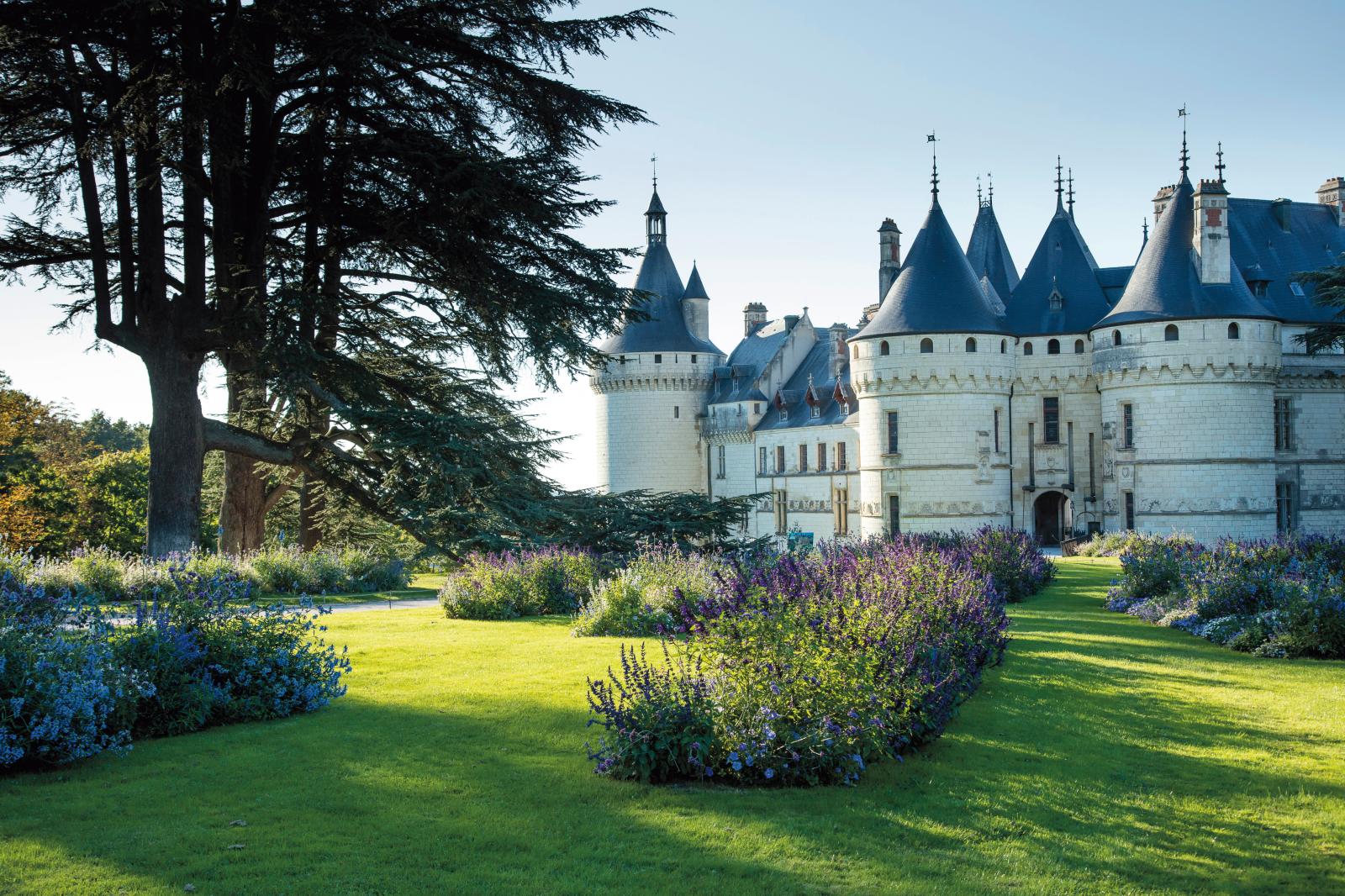 Lovers of the Chaumont-sur-Loire estate always look forward to the return of fine weather, when they come to enjoy culture, nature, or both at the same time. But the 2022 vintage is special. Firstly, it marks a triple anniversary: the 30th anniversary of its International Garden Festival, which each year unveils 30-odd temporary gardens; the 15th anniversary of its "Saison d’art” (“Art Season"), which presents the original creations of 15 artists in dialogue with the landscape and the château, and the 5th anniversary of Chaumont-Photo-sur-Loire, scheduled for the fall. But for its director, Chantal Colleu-Dumond, who is not the type of person to limit herself to celebrations, these events coincide with the opening of a hotel, Le Bois des Chambres, enabling visitors to prolong the enchantment. For, in 15 years, their numbers have more than doubled to over 500,000 (before the health crisis). “The hospitality aspect was missing," she says. “Because there is a lack of accommodation in the area and you need two days to explore our site.” But it is a hotel with a difference, for it goes hand in hand with a "think tank" that, in the fall, kicks off a series of monthly meetings appealingly named "Conversations Under the Trees". One thing is certain: when Chantal Colleu-Dumond took over the reins in 2007, the former director of the Institut Français in Berlin never imagined an adventure like this. Especially since, at the time, Chaumont was a poor relation to the famous châteaux of the Loire Valley. However, it had known splendor in the 16th century, during the time of Catherine de’ Medici and especially Diane de Poitiers, and then early in the 20th century, when it was bought by Marie-Charlotte-Constance Say, the wealthy heiress of the Louis Say sugar mills and wife of the Prince de Broglie. The couple added sumptuous drawing rooms, luxurious stables and an English-style park. But their extravagant receptions were the downfall of the château. In 1938, the furniture was auctioned off. Handed over to the State, it sank into lethargy—until 1992, when Jean-Paul Pigeat, a pioneer in the plant art revival, launched a festival focused on the gardens. It soon found an audience.

An Eventful Destiny
So when the State proposed to transfer some of its monuments to local authorities, the Centre Val-de-Loire region applied to acquire the château. “Our aim," says regional president François Bonneau, "was to create a single project combining nature—the festival and the park—with culture—the architectural heritage—by associating contemporary creation with the theme of the landscape.” Chantal Colleu-Dumond was given a weighty task: the place needed to be revived by filling it with furniture anew. "We did it little by little. Thanks to a regional subsidy of €30,000, we were able to buy 600 pieces of furniture and objects, some of which had remained in the region after the 1938 sale. The photos left by the princess facilitated the reconstruction work.” Meanwhile, the Mobilier National loaned 80 pieces, carpets, sculptures and vases from Sèvres. “Today we keep a regular look-out," says the estate steward Laurent Lébé, “particularly with auctions, but we only make occasional purchases.” The introduction of contemporary art has proved trickier. “Because of its sometimes negative image, often associated with provocation or ugliness, many feared it would be detrimental to the heritage," says Chantal Colleu-Dumond. “Fortunately, the theme of nature, which often inspires poetic works, helped me get the project accepted." In any event, since her appointment, over 150 artists have received commissions, which all echo the location chosen, in agreement with the artists. Art has also gradually crept into the château’s historic rooms and taken over the less noble parts, from the kitchens and maids' rooms right through to the stables, while some spaces have been turned into exhibition areas. One example is the Digital Gallery in the attic, which opened in May. In this 300-square-meter space (c. 360 sq. yds), inaccessible since the war, a hypnotic digital landscape by the Italian artist Davide Quayola—inspired by the gardens of Chaumont, of course—is displayed for the first time.

Between Perennial Gardens and an Art and Nature Hotel
Numerous projects have been developed over the years, "gradually, in an almost natural way, but always based on the requirement of quality," says Laurent Lébé. Two new restaurants now highlight products from the estate and the region's terroirs. In 2012, 10 hectares (25 acres) were added to the park’s initial 22 (54 acres): Les Prés du Goualoup. Here, perennial gardens are cultivated with links to the great Mediterranean, Japanese, Chinese and African civilizations, unlike the temporary creations of the International Garden Festival. And for the past four years, the calendar has been further expanded. September features the staging of "Les Botaniques de Chaumont-sur-Loire", a plant exhibition and sale with the participation of selected nurserymen. In October, during the event "Quand fleurir est un art” (“When Flowering is an Art"), the château’s rooms are transformed with spectacular floral installations. And "Chaumont-Photo-sur-Loire" takes over in November, displaying photographs for three months. "The estate now maintains an almost constant level of activity, which made it worth opening a hotel," says François Bonneau. Subsidized by the region to the tune of €2.2 M per year, Chaumont even manages to be 75% self-financing, through the combined revenue from ticket sales (€4.5 M), restaurants (€1.6 M) and stores (€800,000). This figure could rise to 85% with the opening of the Bois des Chambres. A mix between a rehabilitated old farmhouse and architectural design, the hotel among the greenery created by Patrick Bouchain contains 39 rooms and a quaint thatched restaurant. "The whole thing reflects familiar codes," says Laurent Lébé. For art has a definite place there. Two former barns will be used for seminars, and this is also where the "Conversations under the tree" will be held, hosted by well-known figures, on the estate's favorite themes: heritage, landscape, ecology and contemporary art. ‘Our forte is that we attract a wide variety of audiences,” says Chantal Colleu-Dumond. “Here, art lovers who know nothing about gardens, château enthusiasts who avoid contemporary art, and families who simply come for a stroll all rub shoulders. And yet everyone can make discoveries. The "think tank" will also provide special moments, with events open to everyone. We need oases of thought and discussion to counteract the brutality of our society. With Chaumont, I hope to make my own small contribution to a world that doesn’t seem to realize how fundamental culture is.”

Opening: South Korean Artist Lee Ufan in Arles
Newsfeed
See all news
We Are on Break for Our Annual Summer Hiatus - Back in August! Happy Summer
A Michelin Star for the Museum of Modern Art in Fontevraud
World Record for the French-Danish Painter Gerda Wegener
Canadian Indigenous Groups Ask Vatican to Return Cultural Artifacts
Not to be missed
Cultural Heritage