The furniture of this Neoclassical building in the Seine-et-Marne département, soon to be sold, illustrates the famous lifestyle forever associated with the expression "à la française". 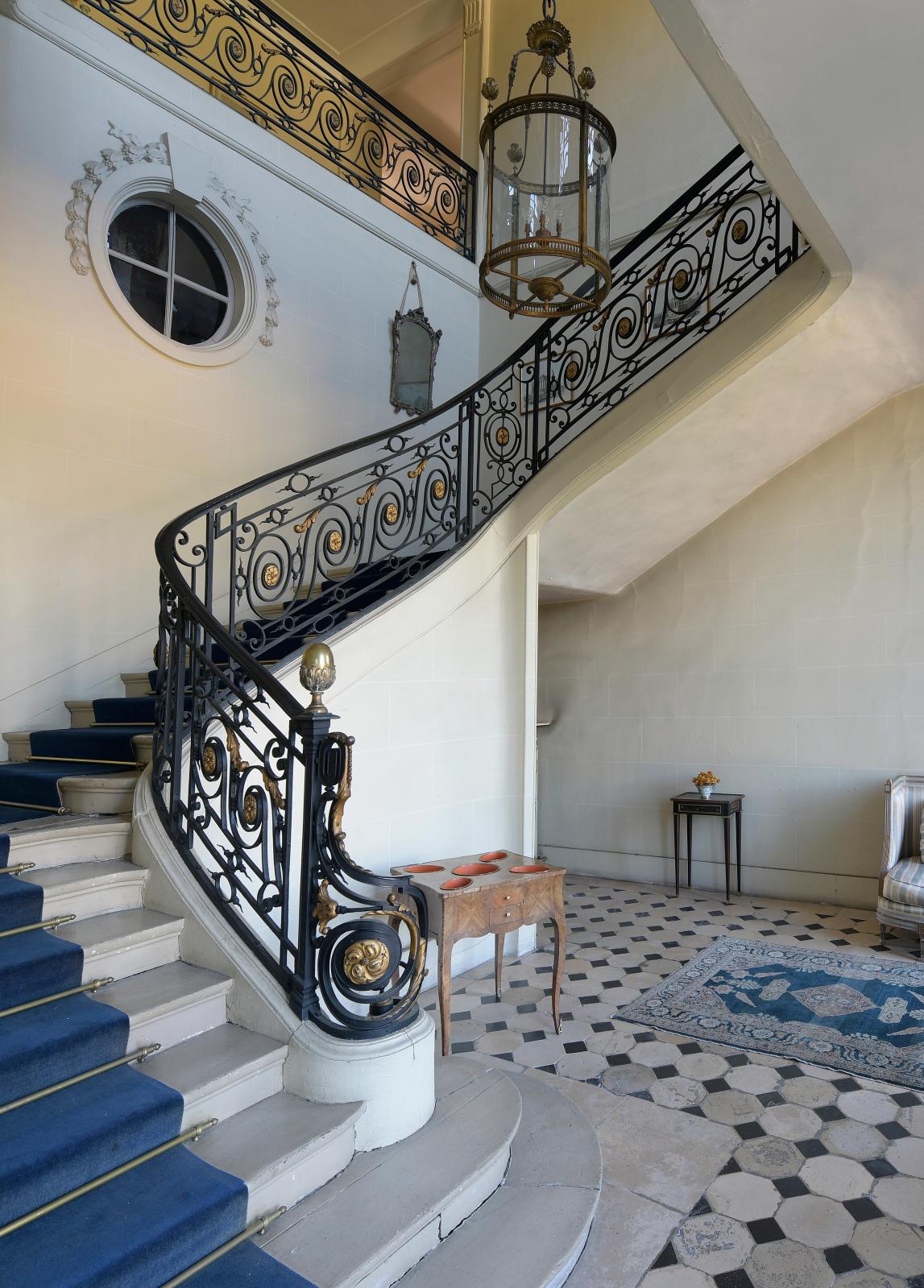 They married and had… a fine château. Thanks to his union with the daughter of Genoese banker Octave-Pie Giambone (not a happy marriage, since his young wife began to dally with the Prince de Conti, but a highly lucrative one), Claude Bellanger, colonel of the King's Household guards, was able to build a splendid residence on the Boulayes estate, replacing the former 16th century abode he had just inherited. This handsome, clever young man was not lacking in connections, one being Louis XV's former favourite, Madame du Barry. For this grand project he called upon the architect Nicolas-Claude Girardin (ca. 1749-1786), a name well-known to the family as a few years previously his father-in-law had used the same specialist to build a private mansion in Paris, still to be seen in Rue de Bondy. A pupil of Étienne-Louis Boullée, Girardin was an expert in the antique style codes dominating the second half of the 18th century. Its long, low, immaculate white façade (subtly lifted by a slightly protruding central section), with two floors and thirteen windows separated by majestic Corinthian pilasters, gives the château a somewhat solid appearance. But its current form is not the one originally intended by its designer. Girardin had planned for lower wings laid out in a curve to rise on each side of the main body, which would have provided even more "Palladian" elegance. In addition, in 1912, the pediments of the main façades were removed and a balustrade was added above the cornice, considerably altering the overall effect of elevation.

Provenances and origins
Bellanger had barely any time to enjoy his enviable status as a landowner: the Revolution was already looming, and to keep his head he was forced to emigrate. The estate was confiscated, then sold as a national asset, but fortunately never suffered any damage. It passed through several hands before being bought by the family of the present owners in 1913. They then restored the French-style gardens and began to refurnish the interior. Their assiduous efforts to surround themselves with fine objects and books produced a refined, balanced ensemble accompanied by colourful provenances. They actively sought out period decorative paintings, objects and furniture, focusing particularly on the dining room: a majestic room, where the original stoves were surmounted by antique-style sculptures. A set of twenty-four mahogany Empire chairs found their natural place round a large Louis XVI-style dining table in the same wood (with six leaves: €2,500/3,000). Three of them – including one stamped "Jacob D. R. Meslée" – came from the Palais Royal, while the "Iacob" mark on the other twenty-one show that they were produced between 1813 and 1825 (€20,000/25,000). In the same room, two pairs of Louis XVI-style chased gilt bronze wall lamps were cast in 1880 from the model delivered in 1787 by Thomire for Marie-Antoinette's games room at Compiègne (€12,000/15,000). And when the table was laid out for one of the receptions frequently held by the owners, it was lit up by a pair of four-branched silver Empire period candelabra (€7,000/8,000). These were produced by the Paris silversmith Jean-Nicolas Boulanger, who was active between 1797 and 1809.

Interior design versus collections
19th century paintings and objects harked back to the decorative arts of the previous century – for example, the series of nine panels with romantic scenes painted in French Rococo-style cartouches (€25,000/30,000). Meanwhile, the majestic Family portrait attributed to a Madrid school in around 1780 (281.5 x 187 cm) looks set to fetch between €16,000 and €20,000. The rooms contained various pedestals and large lidded vases. A pair of Louis XVI style wooden vases with handles on bases painted in imitation marble, made in ca. 1900 (€8,000/12,000), echoed the majesty of the vestibule, like the large lantern (€6,000/8,000) in gilt bronze by Lacarrière Delatour & Cie, the company that produced most of the lighting for the brand new Paris Opera. The owners were also booklovers – their Orientalist library is included in a sale the day before the dispersion of the furniture – and collectors, particularly of antique timepieces. The jewels of this group are two 17th century pocket watches, one with a bevelled chased silver case dating from around 1620 (€5,000/6,000), the other in brass with a silver face (€5,000/6,000). A splendid lifestyle, and no mistake…