In the heart of the Dombes in southeastern France, one of the region's finest chateaux, dating from the 17th century, boasts highly original architecture and remarkable interior decoration. Open to the public, it will soon be changing hands. 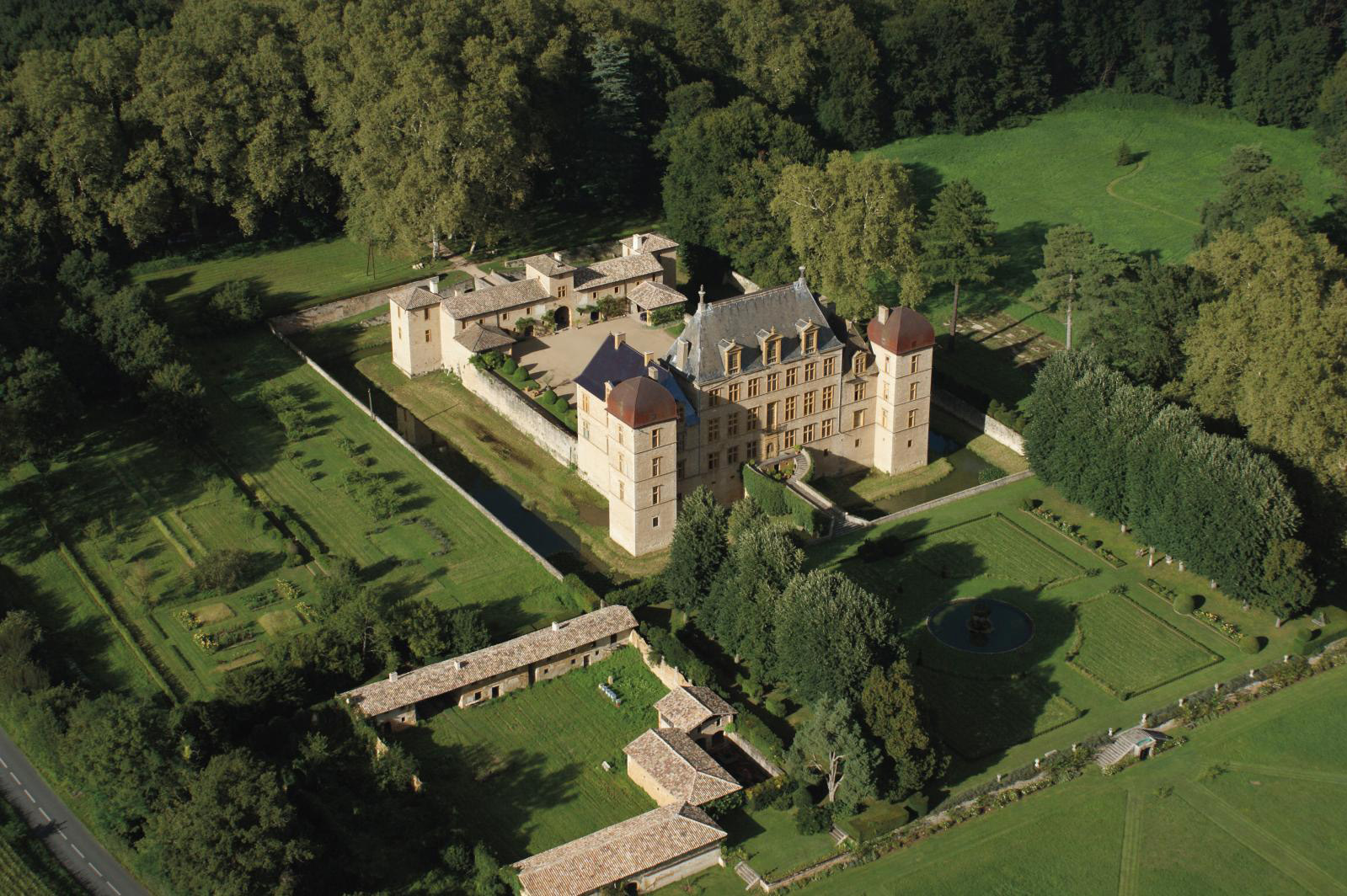 Someone probably needs to be a little crazy (and such people are often called "heritage mad") to want to buy the Château de Fléchères in the Dombes (Ain): an imposing early 17th-century building neglected for years after being shamelessly emptied and looted. Having remained in the same family until the early 1980s, Fléchères was then bought by a property developer with little feeling for heritage. The property seemed doomed to a bleak future until it was purchased in 1997 by Marc Simonet-Lenglart and Pierre Almendros. For many years these owners of the Château de Cormatin in Saône-et-Loire had wanted to save the château, where Philippe de Broca's 1969 film Le Diable par la queue (The Devil by the Tail) starring Yves Montand was shot, restore and open it to the public as they had done in Burgundy. A Herculean task indeed: but fortune favoured the two brave men.

Jean Sève: a devout builder
The history of Fléchères, from its construction to its rescue, is decidedly unusual. It was built "in one go" between 1606 and 1625. We do not know the name of the architect who designed it, but we do know who commissioned it: Jean Sève. One of a line of rich drapers, this native of Lyon obtained his noble title by becoming the municipal magistrate of the former Gaulish capital. His new social status made it imperative for him to build a château on his land, and the freshly acquired barony of Fléchères became home to a huge construction project. Using the ground plan of the former fortified mansion, the owner, now known as Jean de Sève, had a new château constructed in yellow Beaujolais stone, with a two-storey central main building (the corpus logis) flanked by two set-back two-storey wings, and framed by two projecting square towers. On the south side, a double staircase leads to a huge terraced garden.
This original configuration, with its major differences in levels, was due to the owner's religion. As a Protestant, Jean de Sève also built his château to house a church for the believers. For although the Edict of Nantes had granted Protestants the right to practise their religion in the Kingdom of France since 1598, it forbade them to worship in Lyon. Yet building a "church fief" was not a licence for ostentation, either. Its presence was thus indicated discreetly by seven openings on each floor of the nave, echoing the seven sacraments, and three high blind dormer windows, painted in trompe l'oeil, symbolising the Trinity. The inscription that once greeted the believers in the nave is long gone, erased by mallets and chisels after the revocation of the Edict of Nantes. However, the plaque remains. Those for whom it was intended did not need to read it: the Symbol of the Apostles, a profession of faith found at the entrance to Calvinist churches, was familiar to everyone.
Inside, a large "modern-style" open staircase with trompe l'oeil decoration dating from the 1650s serves the upper floors. Its unusual position is disconcerting at first glance, as it is not central but shifted to the west. Here again, Jean de Sève's Calvinist faith dictated this particular layout. The central body was reserved entirely for the Protestant community and the church itself was on the top floor, as nothing should be above God. Since the altar was on the east side of the huge 250-m2 hall, the staircase had to serve the church entrance on the opposite side, hence its off-centre placement. Lastly, only the two set-back wings were given over to the living quarters: the west side for Jean de Sève, the east side for his wife. So the entire layout of the château was dictated by the owner's Protestant faith.

Fresco decoration
After the death of Jean de Sève, who left no direct heirs, his cousin Mathieu, also a municipal magistrate and then provost of the merchants of Lyon, became the owner of the Fléchères estate and decided to have the château fitted out and decorated. He called on one of the Italian painters living in Lyon in the first half of the 17th century: Pietro Ricchi (1606-1675), originally from Lucca, who studied in Florence and Bologna and was a pupil of Guido Reni. In 1632, he and another artist - possibly Paolo Biancucci – painted ten-odd decorative frescoes, whose existence was then almost completely forgotten. Though Marc Simonet-Lenglart and Pierre Almendros hoped to find traces of them, they had no inkling of what they would actually discover. "It was a total surprise: way beyond our hopes," as they said. Through their efforts, the frescoes were gradually liberated from the touched-up areas, whitewash and woodwork hiding them from view, and six of them are now visible, while two others are being similarly cleaned.
Use of the fresco technique – very rare in France, especially in a non-religious building – in itself makes for exceptional decoration. Here, the quality and fine condition of the work, and its rich, highly original iconography make Fléchères one of the most beautiful châteaux in the region, and possibly the finest. Meanwhile, the choice of an Italian artist shored up Mathieu de Sève's assertion of links (imaginary but officialised by the Duke of Savoy) with a noble family from Piedmont: the Marquesses of La Seva...
On the first floor of the central body, the "Hunt" antechamber, used as a family room, reminded everyone that they must fight against vices, represented here by a lion (pride), a boar (lust), a deer (isolation and rejection of others), and a panther trapped by a mirror (the illusion of the senses), conquered by hunters on horseback. Beyond their moral significance, these spirited compositions are remarkable for their varied and ever-fresh palette. Upstairs, the removal of the 19th-century woodwork has revealed a garden scene that emphasises the château's close connection with the nature surrounding it: Fléchères is also a leisure residence, with an ambiance reminiscent of an Italian villa.
In the west wing, two scenes evoke Jean de Sève's loyalty to Henri IV. In the "Hercules" room, painted in grisaille, the mythological hero has the features of the king, who was nicknamed "the French Hercules", and the Labours represented reflect the struggle of not only Christians against sin, but also of Henri IV against civil wars. For Jean de Sève had joined the Bourbon party against the Catholic League, and staged his "Grand Entry" into Lyon in 1595. The "Parade" room undoubtedly echoes this, with its life-size figures of a halberdier (a halberd is a weapon combining a spear and an axe), drummer and standard-bearer dressed in the fashion of the time. Despite their monumentality, they seem about to begin an elegant dance to the sound of imaginary trumpets.
In the east wing, the "Perspectives" room also features a royal entrance: that of Henri II in 1552, organised by the poet Maurice Scève (Mathieu's great-uncle) and Sebastiano Serlio, whose painted architecture - like that of Fléchères – had impressed those who witnessed the event. In the same apartment, the "Virtues" room also seems inspired by the same ephemeral decoration, with its female figures personifying Justice, Fortitude, Temperance and Prudence, framed by twisted columns. Each scene thus has a symbolic or moral meaning: aesthetic qualities and a feast for the eyes are combined with and reinforced by enlightenment for the soul and spirit. It is not hard to see how appealing it must be to live in this place a few kilometres from Lyon. However, its current owners have decided to sell it, after twenty-three years' hard work, because Fléchères could only be rescued thanks to the income from Cormatin, Burgundy's most visited chateau, and this now requires urgent and expensive work. "It is a painful but logical decision because it is becoming hard to manage both monuments simultaneously." Let us hope that their successors, whether in the private or public sector, will continue to keep it open to the public.

The Bibliothèque Nationale de France: A Renaissance
Not to be missed
Cultural Heritage