A totem of French painting, and, according to the Cimabue expert himself Éric Turquin, the most beautiful work ever to pass through his hands, Chardin's Basket of Wild Strawberries has a multimillion estimate. 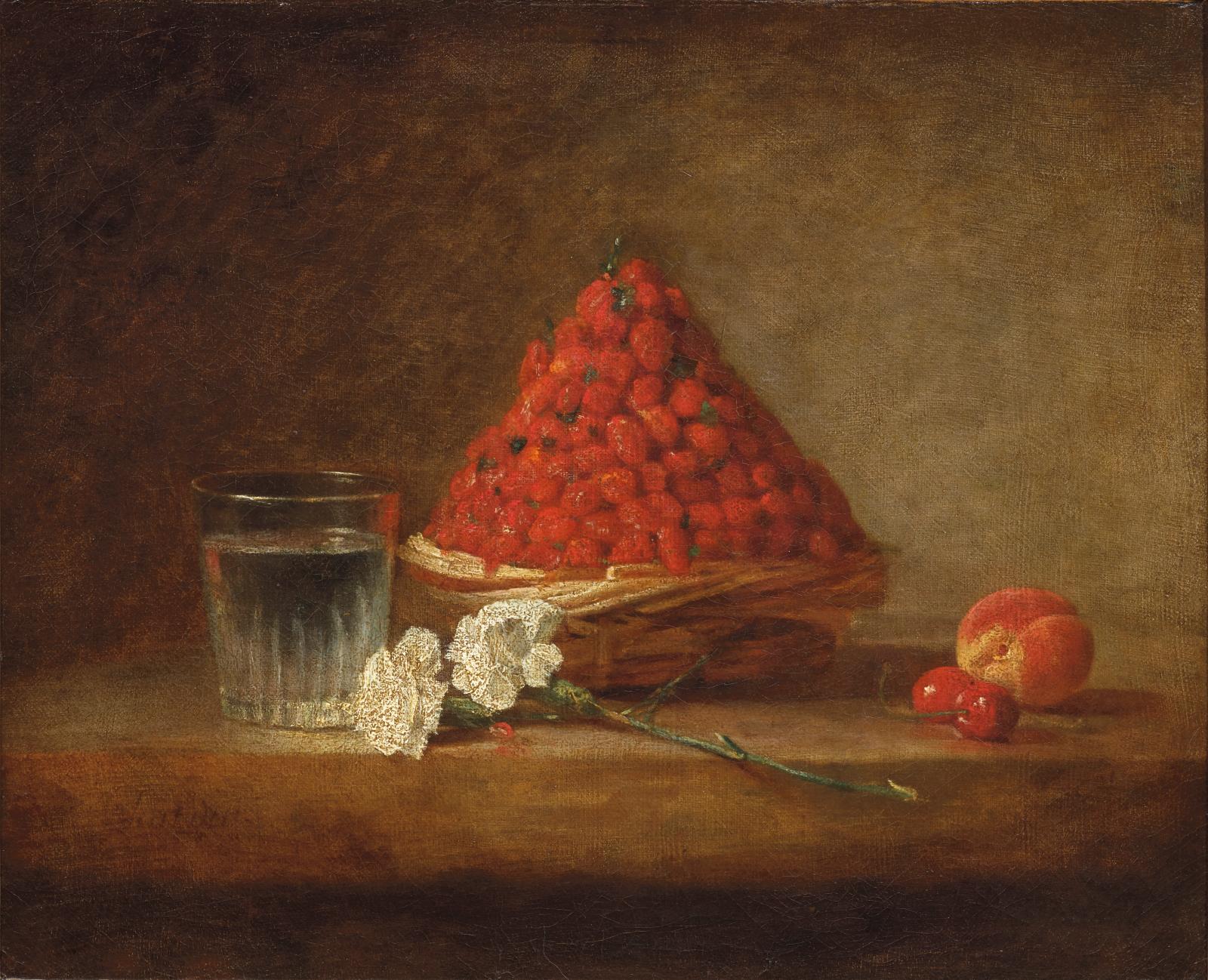 Presented at the Salon in 1761 and copied by draftsman and artist Gabriel de Saint-Aubin in the margin of his copy of the booklet, The Basket of Wild Strawberries was not blessed with the attention of 18th-century critics. A century later, in 1862, Charles Blanc finally mentions “a basket of strawberries, a crystal glass half-full of water in which shimmer the vermilion reflections of a beautiful peach placed next to two white carnations and a few cherries”, concluding: “nothing more was necessary for such an exquisite work.” In 1863, the Goncourt brothers followed suit and delivered a beautiful text on what is today considered an icon of 18th-century French painting. Since then, preserved in the collections of the Marcille family, its first known owners, but often loaned and reproduced, The Basket of Wild Strawberries is undoubtedly even more famous than The Brioche and the forty other paintings by Chardin preserved in the Louvre. André Gide, who had the chance to discover the painting during an exhibition dedicated to the “Masterpieces of French Art” in 1937, was captivated and saw within it “the meditation of a soul as heavy as in his Benediction”.

In 1979, Pierre Rosenberg chose the painting for the cover of the catalog of the Chardin retrospective at the Grand Palais in Paris. He extolled “the extreme simplicity of the composition, which eliminates all detail and achieves perfect equilibrium, an audacity of the execution”, “Chardin has surpassed himself here”, “daring and refined”, “an unforgettable work”, “one of his most beautiful still lifes”. However, Chardin’s allegory of the beginning of summer is elusive and impossible to photograph. No digital reproduction can capture the effect and sensations emitted by the painting: sometimes the apparent weave of the canvas takes precedence over the colors; sometimes the background is overexposed. Such is the intimacy of Chardin’s painting that it must be viewed in real life to comprehend its impact. Proust was not mistaken when he wrote: “Like life itself, it will always have something new to tell you, some prestige to vaunt, some mystery to reveal. Everyday life will charm you so long as you have viewed his painting as a teaching for a few days; and, having understood the life of his painting, you will have conquered the beauty of life.”

A Pyramid, Lines and Circles
In his recent brilliant monograph on Chardin, Alexis de Merle du Bourg succinctly analyses why The Basket of Strawberries is so exceptional: “The effect of the whole mass to which the pyramid of strawberries placed in the ochre woven basket is constituent, and the gradation of clarity of one tone of red in relation to another (what we call ‘value’ in painting), are truly remarkable because they are never accomplished to the detriment of the singular object that makes up the whole. Thus each fruit, tiny and more evoked than elucidated, nevertheless seems to preserve under the painter's brush its own character of form, color, even texture. It is this paradox of suggestion that helps explain why Chardin, who seems to us to be the antithesis of the illusionist artist and the mimetic painter, was perceived as such by his contemporaries.”

With regard to the carnations, the Goncourts see them “modeled in the mass and outline of their contours, rendered by their light; created, so to speak, by the soul of their color, they appear detached from the canvas and come to life”. The use of green is of tantamount significance. The delicate stems of the carnations, the tails of the cherries and the leaves of the strawberries all provide a rhythm to the composition and counterbalance the equilibrium of the masses. These are sometimes full, like the cherries and the fleshy peach­—their shadows imbuing them with tangible substance— and sometimes evanescent.

The regular tetrahedron of the wild strawberries appears twice in Chardin's work, demonstrating his fascination with the shape: in the present painting and, as revealed by the X-ray of the contemporaneous but slightly smaller painting in the Carnegie Museum of Art, in Glass of Water and Coffeepot. As with the deliciously round The Brioche in the Louvre, the interlocking pyramids of the iconic The Ray in the same museum, and the cone of The Woman Drawing Water from a Water Urn in Stockholm, Chardin successfully substitutes these shapes for anything remotely geometrical in our minds and visual memory. Fundamentally, he reinvents his own idiosyncratic geometry that pervades his work, and which he transmits to his viewer.

Red and Blue
What if a few touches of red alone were to call into question the history of painting? How can we explain their presence above the stone table? How can we explain the fact that Chardin, the most patient of French artists and the most virtuoso connoisseur of the medium, allowed his work to be “sullied” by such blots of paint? Perhaps it is not entirely by chance. Among Plato's solids, the polyhedron is a symbol of fire and here it inflames Chardin's mind, who abjures all timidity and marks his proto-Impressionistic masterpiece with these bold flecks of paint. The presence of blue, almost imperceptible, so much so that the work must be stripped of its yellow varnish, is part of an equally innovative approach. We should not disregard Renoir's famous phrase: “One morning, one of us, lacking black, used blue: Impressionism was born.” These shades of blue attracted the attention of the Goncourts. They encourage us to focus on just a few details: “But again, see these two carnations: it is nothing but a tangle of white and blue, a sort of sowing of silver enamel in relief; step back a little, the flowers rise from the canvas as you move away, the leaves of the carnation, the heart of the flower, its tender shadow, its crumpling, its shredding, everything comes together and blossoms.” The “marvelous optical operation” mentioned by the Goncourts arouses the attention of the spectator, who is surprised by their reaction and piqued.

Ten years later, the first critics of the Impressionists castigated their indulgent and truculent handling of colors and their forms, which, when seen up close were vague and imprecise, but came to life as they moved away. Is this not already the case with the pyramid of wild strawberries? Wasn't Chardin's subject, long before Monet, the fleeting nature of things and their impression on us? What if the birth of Impressionism dates back to the Salon of 1761?