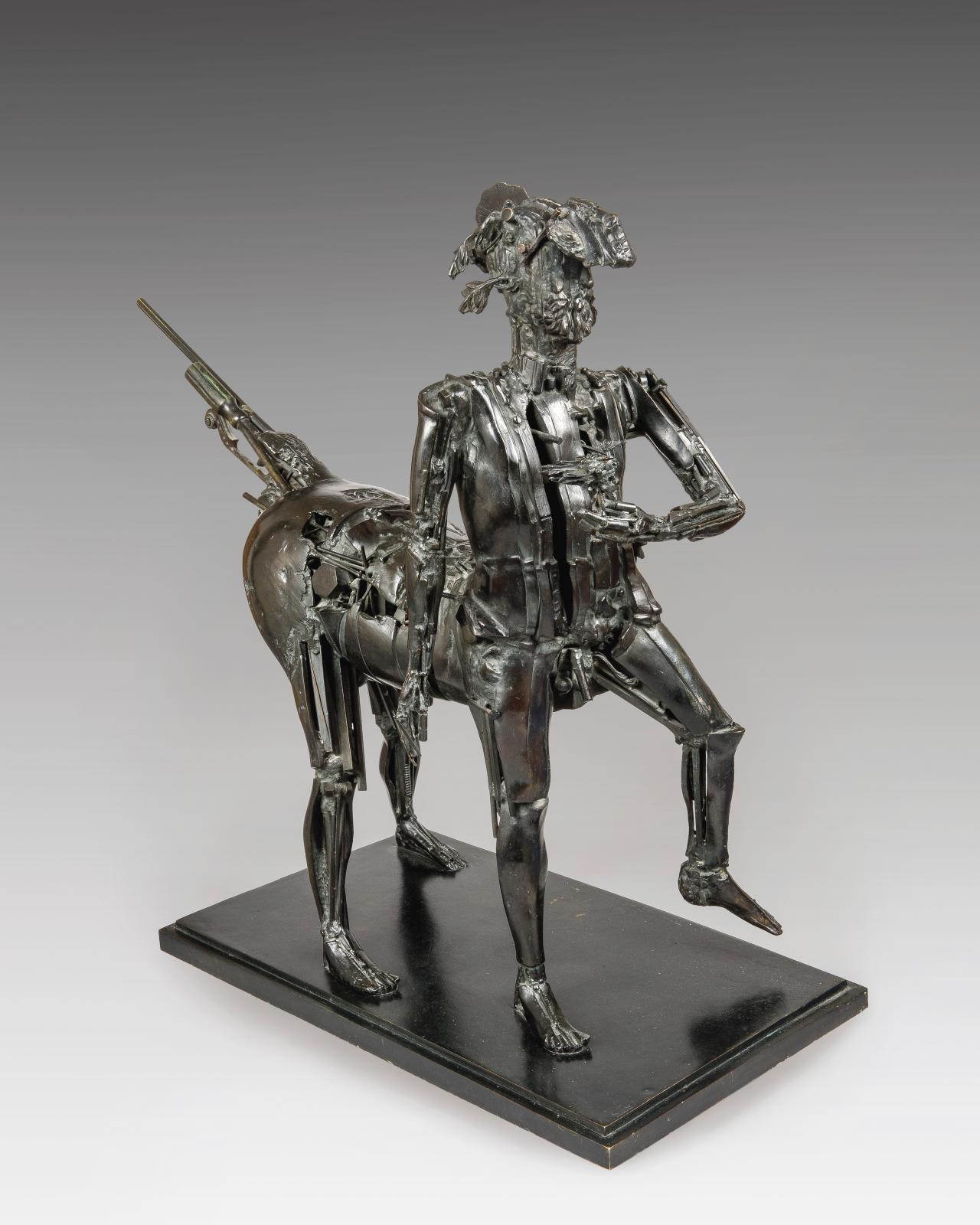 It took twenty years for the Centre Pompidou-Musée National d'Art Moderne in Paris to pay homage to one of the most popular French artists of the 20th century, and one of the most controversial. A period of limbo? Time enough, for some, for the “César affairs” to die down – the forgeries and the haggling over his estate – and for others to get the measure of his talent. Even during his lifetime, the lad from Marseille experienced glory and misfortune alike. Some of the intelligentsia rejected his Compressions exhibited at the 1960 Salon de Mai, and he was criticised for his typically Mediterranean gift of the gab.

The iron man
Nonetheless, he quickly shot to success – a natural handyman who, as he himself put it, was “always fiddling with something”. He first attended the Fine Arts school in his hometown, then in 1943 headed for the École Nationale Supérieure des Beaux-Arts in Paris. César, né Baldaccini, applied to get in, but in vain. He trained instead at an industrial carpentry factory in the Var region, and later with scrap metal dealers in the Paris suburbs. There, he tried his hand at arc welding and discovered his preferred medium: scrap iron. “I used scrap out of necessity, but I revelled in the material,” he said. In 1954, he exhibited his first welded iron works at the Lucien Durand gallery, including “Le Poisson” – the piece that opened the Centre Pompidou exhibition. “When you look at this sculpture, which is over two metres long and made entirely out of welded scrap metal by someone who had his very first exhibition in 1954, you can’t help thinking: what a brilliant artist!” says Denyse Durand-Ruel. She had met him long before 1968, the year he asked her to oversee his catalogue raisonné. “César made a remarkable beginning,” she says. “After Lucien Durand, Claude Bernard managed his career well with the welded iron pieces, and then came the Compressions. Some people loved them; others not so much…” At that point, in fact, Claude Bernard let him go, but his career took off again with Pierre Nahon and the bronze works.

César on display
César had a string of exhibitions during the 1960s. As his fame grew, he moved closer to the New Realists, who likewise made use of objects from consumer society. In 1967, the prize for the 9th São Paulo Biennial pitted him against Richard Smith: the British artist won, but the Frenchman gained a consolation prize, as the Museum of Contemporary Art of the University of São Paulo bought an “Expansion contrôlée” for the tidy sum of FF1 million. According to the press, it was the most expensive work in the Biennial. He then took part in Documenta for the third time, in 1968, after appearances in 1959 and 1964. In 1978, the “César” exhibition in Antibes attracted some 20,000 visitors. In 1993, the current Centre Pompidou director, Bernard Blistène, was already organising a retrospective at La Vieille-Charité in Marseille. Two years later, the French Pavilion at the Venice Biennale was groaning with the sculptor’s monumental “Compressions”, at the invitation of Catherine Millet. In 1997, the Galerie Nationale du Jeu de Paume in Paris enabled visitors to see his recent series of self-portraits. In the end, César only had about thirty solo shows, including nearly twenty in museums: barely more than 10 % of all his exhibitions. Their number increased after 1983, mostly through his participation in group exhibitions, and reached a peak in 1998, the year of his death. His work is now found in the collections of fifty-odd international museums, from Japan to Rio. And yet…

A French market
There is no doubt that France is still the sculptor’s main market by a long shot, with 77 % of the lots on offer (around 5,000), and 78.79 % of the turnover (€48.3 million) – over 81% if you include Monaco. “Most of the collections are French. Unfortunately, he has not yet achieved international recognition,” says Denyse Durand-Ruel regretfully. Since 2013, the César Foundation (created a year earlier by the artist’s last partner, Stéphanie Busuttil-Janssen) has endeavoured to promote the sculptor in the United States via the Luxembourg & Dayan gallery in New York. The gallery has already dedicated two exhibitions to him, in 2013 and 2016, and a third is in the pipeline this year. “American audiences are fascinated with the variety of César’s output and his experiments with materials. We’ve sold large-scale works to major US collections,” says Daniella Luxembourg, who plans to present César’s work in her London gallery. The French artist’s name has not yet managed to cross the Channel. At auction, the UK only represents 4.36 % of lots on offer, with less than 10 % of the turnover, followed tentatively by Italy (2.51 %), Monaco (2.34 %) and the US (2.24 %). While the first referenced appearance at auction was in November 1984, the number of lots presented has grown steadily, and now stands at 400 a year. The median price, which tended to fluctuate considerably until the 2000s, has since settled at around €3,000. Meanwhile, his turnover has shot up since 2004: the result of successive records being set (in 2012 and 2017). The highest bid for a work by César remains his bronze “Pouce” from 1975, sold for €1,218,636 in October 2007 by the Cornette de Saint-Cyr auction house at Drouot. In fact, few works have topped the €300,000 mark (10 lots in all); just under a hundred lie in the €100,000-300,000 range (91);159 lots have sold for €50,000-100,000, and 305 for €25,000-50,000. There’s no denying that the French sculptor is not as popular at auction as some – for instance, the American John Chamberlain, with whom he is all too hastily compared. Undoubtedly, the affair of the “forged Césars”, which made the headlines in the 2000s with the story of Éric Piedoie, aka Le Tiec, who counterfeited drawings and Compressions – has not done the artist any favours. The same goes for the famous pieces intended for the César museum planned in Marseille, which was eventually abandoned in 1997. The sculptor immediately turned these pieces into new works. “He was within his rights to do so, but he was accused of making forgeries. It was disgraceful. Fortunately, things have now been set right,” says Durand-Ruel. One thing is certain for the author of the catalogue raisonné: the Centre Pompidou exhibition, representing César’s entire oeuvre, including his hitherto little-known plastic Enveloppements, “is sure to have an effect”. In the end, all things come to him who waits…

Nathalie and Georges-Philippe Vallois: visionaries for 30 years
Newsfeed
See all news
Frieze New York is Coming Back in May
Museums Permitted to Reopen in Six Italian Regions
A Mysterious Tanguy Work is Up for Auction
Stunning Discoveries in Saqqara
Not to be missed
Market Trends
Art Market Overview: the Highest Prices in 2020
Every year, Artprice ranks the most expensive artworks sold at auction.…
Market Trends
2021: A Fresh Start for Drouot
Drouot is ringing in the New Year with key changes in its organization.…
Market Trends
Art Market Overview: the Chinese Market in Decline
Artnet's report on the Chinese art market, published last month…
Market Trends
The Art Market: Champion of the Circular Economy?
Between global climate and health threats, the explosion of online…