A new exhibition at the Musée des Arts Décoratifs (MAD) in Paris reveals the influence exerted by the arts of Islam for over a century on the jeweler's creations in terms of form, decoration and color. An area of unsuspected splendor. 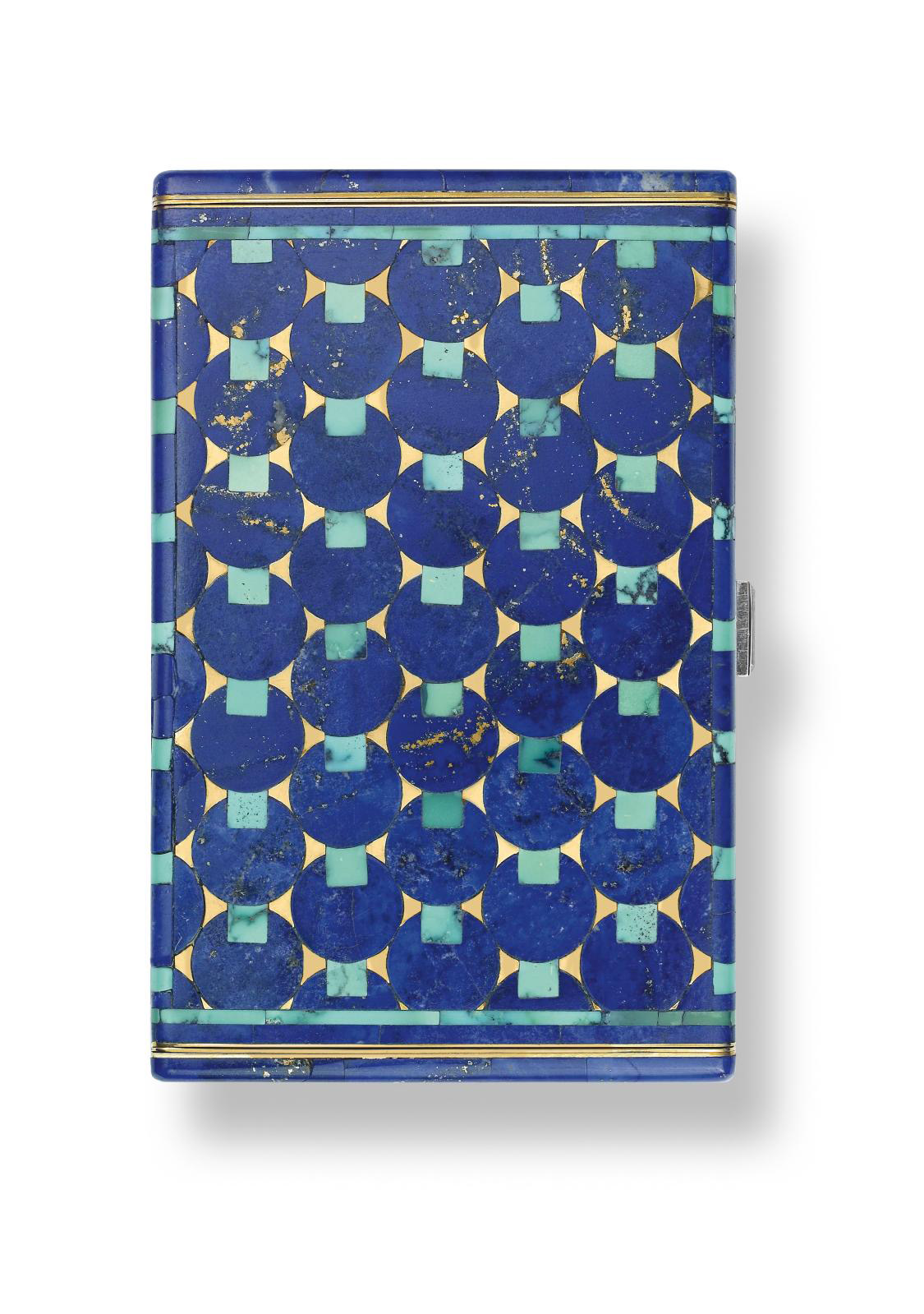 Cartier, a jeweler, was also an antique dealer. In addition to contemporary jewelry, the company offered for sale Sèvres porcelain,18th-century silverware and small paintings. Was it this ambiance that gave Louis Cartier (1875-1942), the third to take the helm, a taste for collecting? His attraction to antique objects was a determining factor in the company's aesthetic explorations. "In 1900, the 25-year-old Louis Cartier was a young designer on the lookout for new inspiration," says Pierre Rainero, Cartier's director of style, image and heritage. "He had an inquisitive mind and a passionate love for China, and collected Japanese Inrô. While we have already highlighted the contribution of Asian art to our designs, this is the first time we are covering in such depth the influence of the Near East, which left a deeper imprint." Here, at the Musée des Arts Décoratifs in Paris, some three hundred objets d’art from Persia, the Arab world, and Mughal India are seen in relation to jewels, cases, and clocks by Cartier. The exhibition is overseen by a quartet of curators: two from the Dallas Museum of Art, the exhibition's partner, and a scholarly Parisian duo formed by Judith Henon-Raynaud, the Louvre's Islamic art specialist, and Évelyne Possémé, Chief Curator for the Department of Antique and Modern Jewelry at the Musée des Arts Décoratifs.

Discovering Islamic Art
In 1904, a diamond and platinum band with an openwork design reminiscent of moucharabiehs (moucharaby) appeared in Cartier's windows. Where did this Islamic inspiration come from? The previous year, an exhibition of Muslim art had been held at the Pavillon de Marsan in Paris. This was presented with considerable scientific rigor, and far from illustrating postcard orientalism, opened visitors' eyes to the hitherto little-studied civilizations of Islam by Europeans. In 1910, a retrospective on the same theme staged in Munich brought together over 3,500 antiquities arranged according to their geographical area in an understated presentation that truly impressed viewers. Two years later, the Musée des Arts Décoratifs staged another impressive show of Persian and Mughal miniatures: pure marvels. This time, Louis Cartier contributed some personal loans. The jeweler had inherited a library of the art of the Middle East, Near East and Southeast Asia from his grandfather and was eager to add to it. Political events provided myriad opportunities to enrich his collection, for Iran underwent a revolution between 1905 and 1911. During this period of unrest and anarchy, a trove of national treasures left the country and poured into Paris, the hub of the trade, dominated by Armenian dealers like the Kalebdjian brothers, Louis Cartier's neighbors on the Rue de la Paix. He would visit them assiduously in search of miniatures, bindings, and objects inlaid with hardstones. "He was an erudite aesthete, attentive to the origin of pieces," says Évelyne Possémé. "For example, he owned a portrait of a sultan painted in Herat around 1480-1510 and an agate wine cup that belonged to the same sovereign." Louis Cartier later had the intelligence to make his precious books available to his designers. They searched for a muse, leafing through The Grammar of Ornament by Owen Jones (1809-1874) or the Manuel d’art musulman (Manual of Muslim Art) by Henri Saladin (1851-1923). If a detail in an Iznik ceramic piece or a motif on the façade of the Samarkand Mosque attracted their eye, they would immediately sketch it in a notebook of ideas. These registers covered with "Arab decorations" and "Persian decorations", carefully preserved in the Cartier archives, are a positive goldmine. The French curators explored them page by page. They also delved into the work of Charles Jacqueau (1885-1968), Louis Cartier's highly inventive collaborator, 3,000 of whose drawings were donated to the Musée du Petit Palais, in Paris. "Thanks to this, the creative process has never been so well highlighted," says Pierre Rainero.

A "Peacock Decoration"
The stage design brings together old architectural photographs, preliminary sketches, and finished jewelry. Visitors discover how the fluted motifs adorning a Cairo monument were used to decorate an onyx and coral headband; how Persian friezes, tracery and arabesques appear on supple diamond bracelets; how an enamel plaque brought back from Iran was used to decorate a cigarette case: what Cartier called a "finish". The jeweler appropriated the abstract motifs of Islamic iconography: triangles, hexagons, scales, sequins, waves, and so on. Geometry heralded the modernity of Art Deco. And while the company on the Rue de la Paix borrowed designs from the East, it also drew on color associations. "Louis Cartier, with his 'peacock decoration', was the first to combine the blue of sapphires and the green of emeralds in the same jewelry set," says Évelyne Possémé: a bold combination suggested to him by Moroccan earthenware. To this palette, he added turquoise, a hardstone extracted from Iranian mines, and lapis lazuli from Afghanistan. The arrival of the Ballets Russes in France was also a factor in this new polychromy. Scheherazade, which Diaghilev's company performed at the Paris Opera in 1910, caused a real stir, dazzling the public with costumes and sets in shimmering colors by Leon Bakst, known as the "Gauguin of the theater". Cartier's designer Charles Jacqueau attended a performance open-mouthed, sketchbook in hand. The sensual staging depicting the harem of a privileged sultan, shock the entire Parisian society. The Thousand and One Nights became a craze, and the Persian tale, translated by Mardrus, was published in various illustrated editions. Couturier Paul Poiret dressed his clients in turbans and harem pants, while Cartier crowned them with aigrettes studded with diamonds. Elegant women also wore bracelets on their upper arms, inspired by Indian "bazubands". India, the home of wealthy, freely-spending maharajahs, was a positive Eldorado. Cartier was asked to produce its first Indian jewelry for Britain's Queen Alexandra, who had jewels from the royal collection transformed to wear with dresses given to her by Lady Mary Curzon, wife of the Viceroy of India. The London Cartier branch was overseen by Jacques (1884-1942), the youngest of the three brothers. As an official supplier to the Crown, he was invited in 1911 to the Third Durbar ceremonies in Delhi, when George V and Queen Mary were crowned Emperor and Empress of India, entailing extravagant festivities that lasted nearly a week. It was a perfect opportunity to get closer to the opulent princes of the peninsula and establish ties with stone dealers. From India, Jacques Cartier brought back gems by the batch: emeralds engraved with flowers or inscriptions from the Mughal period, and rubies cut into faceted balls, used in multicolored necklaces known as "tutti frutti": a Cartier specialty. He also bought antique jewelry, reselling it as is in the Paris, London and New York stores. At Cartier, the Indian vogue never died and returned with a vengeance in the late 1960s. As the catalog reminds us, the eccentric, ravishing Mexican actress María Félix wore 'exotic' jewelry on her "hippie haute couture" outfits: decidedly an early bobo (bohemian- bourgeois)!

Worth seeing
"Cartier and the Arts of Islam: Sources of Modernity",
Musée des Arts Décoratifs, Paris II.
Until February 20, 2022.
madparis.fr