For thirty years, the grande dame of antique wallpaper has been tracking down the oldest specimens, often in the US. Carolle Thibaut-Pomerantz talks about her greatest finds. 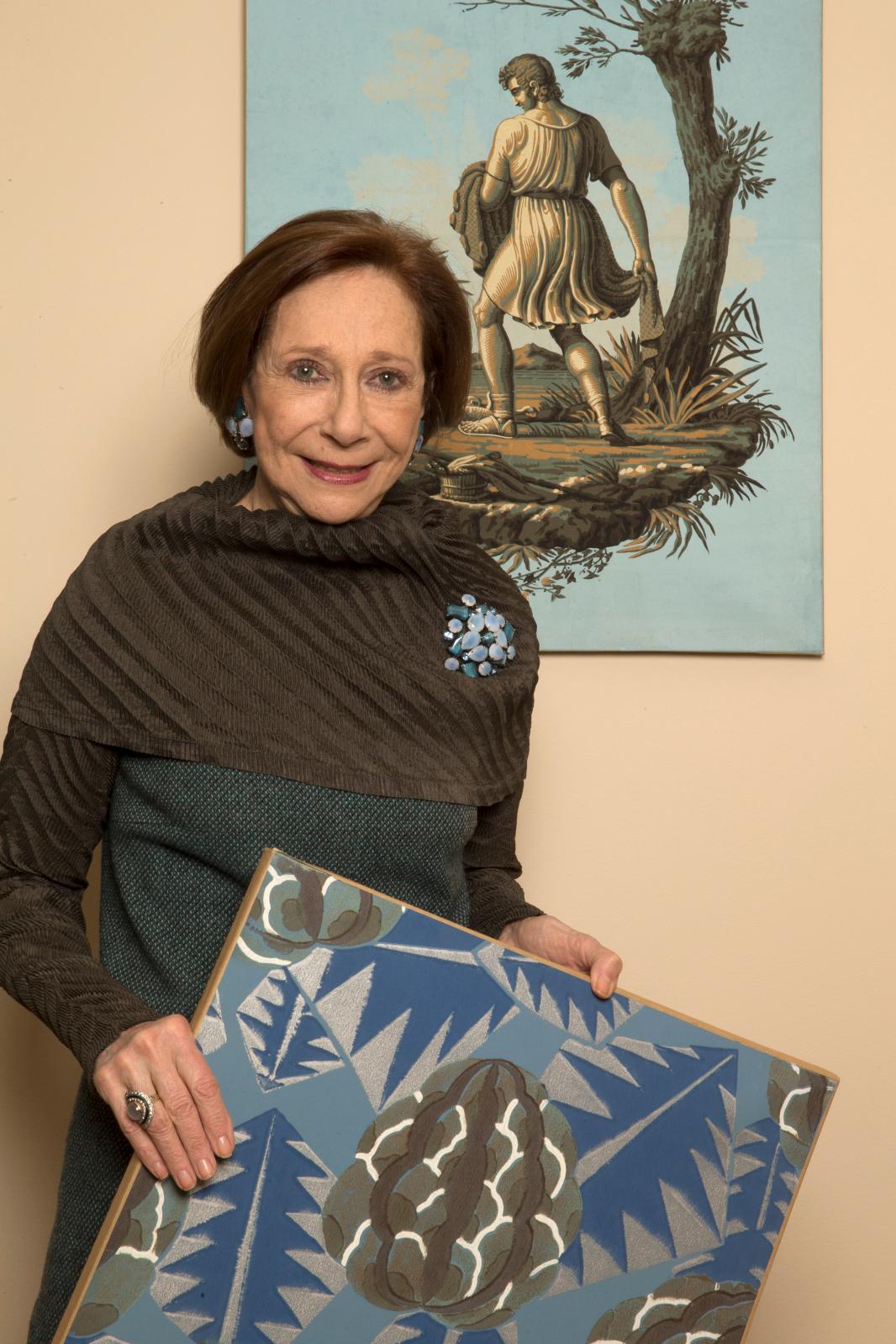 A loyal supporter of TEFAF Maastricht for thirteen years, she is the foremost antique wallpaper specialist: a passion that germinated at Drouot in the 1980s. Since then, Carolle Thibaut-Pomerantz has travelled across Europe, and a great deal around the United States, too, unearthing and rescuing the finest pieces. Museums defer to her, and many private clients succumb to the charms of her panels, presented as paintings. To highlight their standing as works of art, Thibaut-Pomerantz combines them with Art Deco or even designer furniture.

Can you tell us about masterpieces you’ve discovered in your thirty-year career?
Well, there's “Les Allégories des arts”. This is the only decoration designed by the architects Percier and Fontaine, and it turned up in America, in a house built in the 1930s by David Adler. His sister, Frances Elkins, was an interior designer and every time she worked on projects with him she would include French wallpapers. The owners' descendants had to deal with water damage to the house; they contacted me and sent me photos. I had the panels shipped to France to restore them, and then I realised that I was looking at “Les Allégories des arts”, whose design is in the Musée des Arts Décoratifs in Paris. I sold it very quickly to a prominent American interior designer, and off it went to New York!

Why are Americans in particular so fascinated by them?
French wallpapers began to supplant those from England starting in the third quarter of the 18th century. Jean-Baptiste Réveillon explored new engraving techniques for large-scale designs and employed artists to do the preparatory drawings. The wealthy inhabitants of New England would commission wallpapers, and French craftsmen went to mount them on site, since wallpaper sheets were then only 40 x 50 cm and a real conundrum to put up. Later, in the early 20th century, Nancy McClelland did much to keep that relationship going. She loved everything French – panelling, furniture and wallpaper. She studied in Paris, and when she returned to New York in 1913, she created the first antiques section in a department store, Wanamaker’s. It was called Au Quatrième. She then opened her own shop and worked with leading American families, like the Rockefellers. Nicknamed the “first lady of wallpaper”, she wrote the first scholarly book on French wallpapers in 1924, with an introduction by Henri Clouzot, who himself published the subject matter’s “bible” in 1935.

Is the market still in the US nowadays?
Yes, mainly, although I also have Russian and European customers. I’ve taken part in a lot of fairs in the US, in Palm Beach, San Francisco and Chicago – all highly sophisticated cities. These days I am focusing on New York again. I've exhibited at the International Fine Art & Antiques Show and the first TEFAF New York, and I always go to the Winter Antiques Show.

You also have a personal connection with the country…
Yes, I am American, too, since I was born and raised in New York. My father was a businessman and my mother ran the Thibaut Gallery, where she presented Alex Katz, Agnès Martin, Cy Twombly, Max Ernst, Giacometti, Fontana and Dubuffet, among others. She influenced me greatly. I was thoroughly immersed in contemporary art.

So no antique wallpapers at this point… How did you get hooked?
It happened much later. After studying art history at the Institute of Fine Arts - NYU, I started a fair in my home. Every month, I would organise exhibitions on themes like antique Chinese snuffboxes or the tea ceremony. I went to Paris regularly and would always go to Drouot to hunt around and get new ideas. One day, I came across a room filled with wallpapers being sold by the Coutau-Bégarie auction house. I began quizzing the expert, Bernard Poteau, and we became friends. He taught me everything. He was the one who advised me when I decided to come and work in Paris and specialise in antique wallpapers. No-one else was.

When you say "antique", what date do you go up to?
Up to the 1940s. After that, production became industrial. But during the Art Deco period, wallpaper was still woodblock-printed and there are some marvellous pieces. I’ve seen some amazing things from the Leroy factory, by André Groult, Mauny and Grantil. I also remember a piece by Henri Stéphany made for Rulhmann with gold leaf highlights, and others by André Mare and Jean Lurçat. But they are impossible to find these days.

What is the price range in this field?
As I always say: you get a lot of bang for your buck! Grantil’s small-scale pieces are worth €3,000, “Les mois” by Dufour €9,000, "Pierrot" around €65,000. It’s very reasonable, because I sell them in impeccable condition: they are cleaned, placed on a sound support – an acid-free linen canvas – and mounted on a frame.

Christian Vrouyr: Ever Loyal to BRAFA
Newsfeed
See all news
Gilbert Baker’s Original 1978 Rainbow Flag Acquired by GLBT Historical Society, California
Face Mask Affixed to Giant Buddhist Goddess in Japan to Pray for COVID-19 to End
Sculptor Sued by the Heirs of Hergé, Convicted of Forgery in Marseille, France
New Appointment at the Musée National de la Marine
Not to be missed
Interviews
Valérie Guillaume: Head of the Newly-Renovated Musée…
Paris's oldest museum has reopened in a completely refurbished building,…
Interviews
François Pannier, a Forerunner of the Himalayan Art Market…
François Pannier has endeavored to build a Himalayan art market…
Interviews
Alexandre and Pierre Lorquin, Keepers of the Flame of…
Their reserve barely conceals an ambition honed at elite schools.…
Interviews
Veerle Thielemans: Sharing Pleasures at the Art History…
For its 10 th anniversary, the three-day Art History Festival at…