A work by the virtuoso draughtsman reappears, putting the stars of 18th-century Parisian theater back in the spotlight: Voltaire and one of his best performers, Jean-Baptiste Brizard. 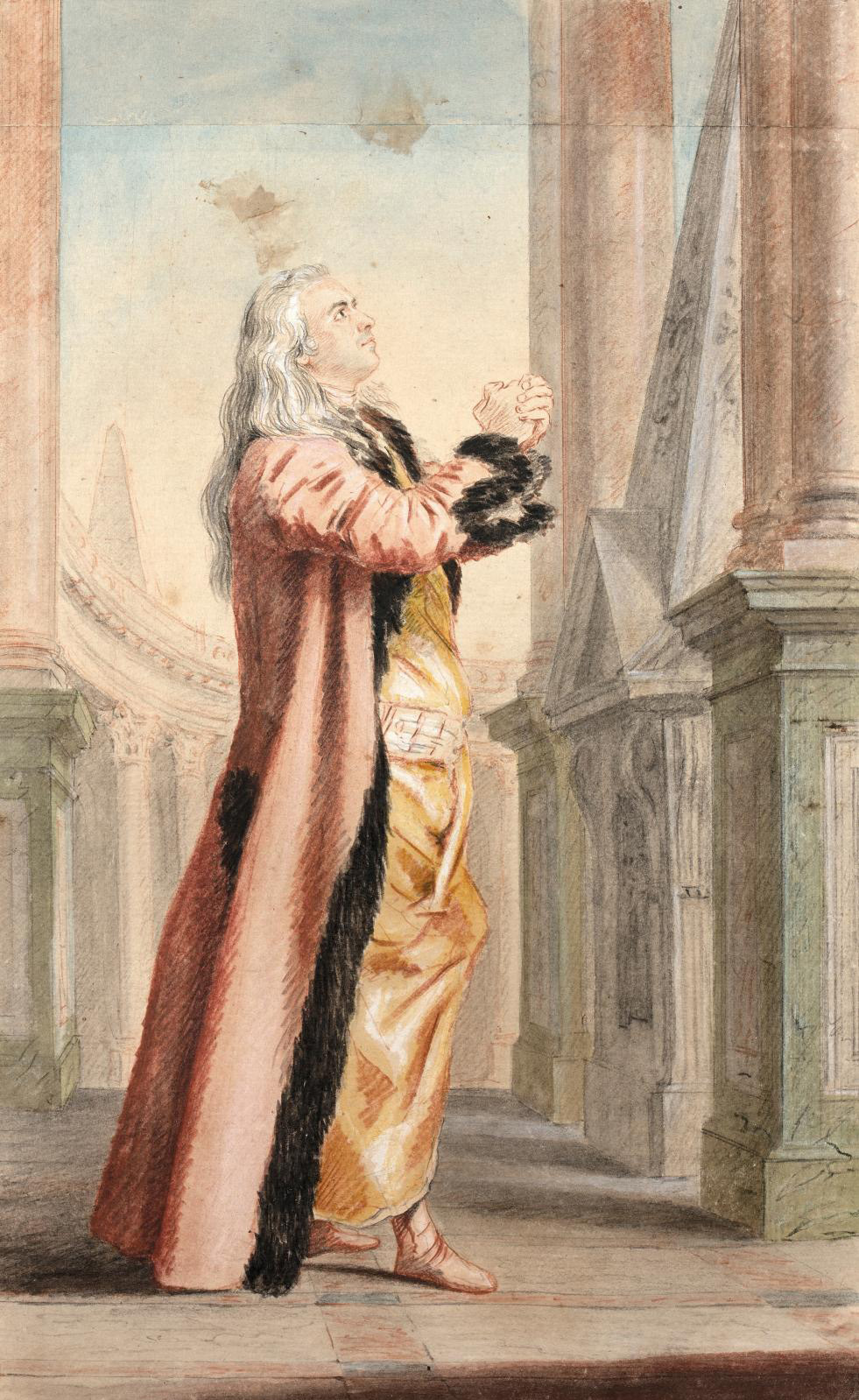 In this watercolor drawing, the subject, dressed in a caftan and long Middle Eastern-like dress, theatrically implores the sky with eyes and fists raised... And with good reason: Jean-Baptiste Britard, known as Brizard (1721-1791), was one of the greatest tragedians of the 18th century. Thanks to his imposing presence, his long hair (which has remained famous) and above all his stentorian voice, the young actor quickly gained recognition on the stages of the French capital. He joined the Comédie-Française in 1757, becoming its 140th member, before succeeding his colleague Sarrazin in 1759. Along with Lekain (Henri Louis Cain) and Mademoiselle Clairon, Brizard belonged to the generation of actors who reformed the tragic play in the Age of Enlightenment. As for the creator of this inspired drawing, it is none other than the chronicler of Parisian high society: Louis Carrogis, known as Carmontelle. For once straying from his preferred interior scenes drawn from real life, the draughtsman captures Brizard in one of his great successes, Mérope, a tragedy by Voltaire that was first performed at the Comédie on February 20, 1765. The writer and philosopher, as we know, was more adulated in his time for his theater than for his polemical writings, delivering some fifty plays that are now well forgotten. Among these is Mérope, a five-act drama written in 1743, and in the preface of which Voltaire explains his desire to return to “Greek simplicity”.

In the Service of Voltaire’s Theater
The plot is based on the mythological story that formed the basis of Euripides tragedy Cresphontes, considered contemporaneously in Athens as one of his masterpieces, but now unfortunately lost. Its heroine, Merope, widow of the king of Messene, has hidden her son Aegisthus from the pretender to the throne, the dangerous Polyphonus, who wants to kill the child. Upon reaching adulthood, Aegisthus reappears and, after a long imbroglio, kills his rival before being recognized by the Messenians as heir to the throne and the legitimate sovereign. Brizard plays the role of the old man, Narbas, who raises Aegisthus in exile and brings him back to Messene. Having performed in several of Voltaire's plays, Brizard became one of his stalwart actors; as such, it was he who was to crown the old writer with laurels during his famous "triumph" on 30 March 1778 on the stage of the Comédie-Française, two months before Voltaire’s death. The illustrious octogenarian is said to have announced to Brizard: "Sir, you make me miss life!” For its part, our watercolor was set to have a grand posterity, as an old inscription on the back reveals: Empress Catherine II, having been made aware of the drawing, "asked Baron de Grimm, her resident in Paris at the time for all matters regarding her relations with famous writers and artists, for a copy ". Moreover, the work, which has never been published before, would turn out to be the preparatory sketch for the etching engraved by Jean-Baptiste Delafosse, a copy of which is kept in the Musée Carnavalet in Paris.

Newsfeed
See all news
San Francisco: New Bernice Bing Exhibition
Art Basel Miami is Shaping Up to Be a Memorable Edition
Mexico: Dealer Mariane Ibrahim to Open Gallery
Auction: Marilyn Monroe Is Once Again in the Spotlight
Not to be missed
Pre-sale

Goya as the Standard-Bearer of a "Classic" Co...

Little is known about the Parisian who built this collection, which...

A Collection of Greek Art in Normandy

A dispersal of the contents of a Norman manor house will be the first...

Waterhen has been in the same Lyon collection since the 1930s. It...

He made lines resonate with one another to demonstrate the existence...