The Venezuelan artist, 1923-2019, continued his research on color, the foundations of which he established in 1954, right up until his death aged 95. Just months earlier, we visited his studio, which resembles a beehive—a true family business at the service of art. 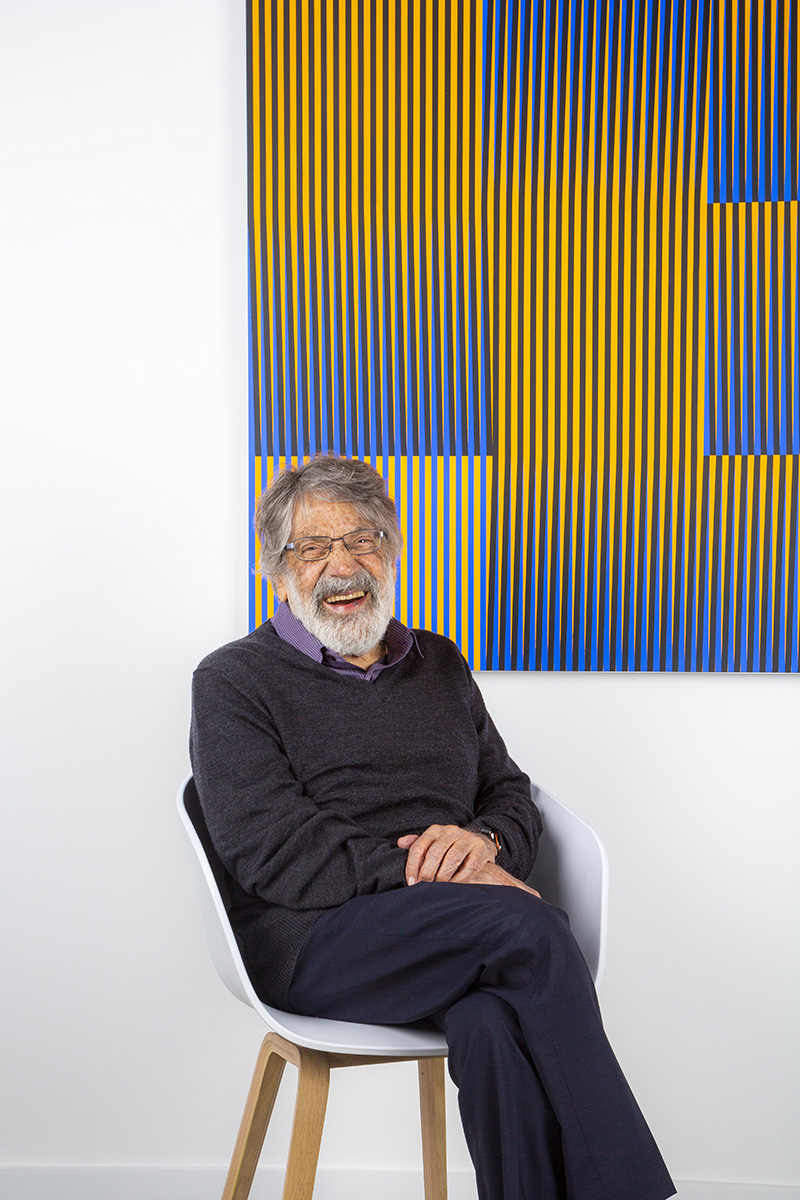 The historical workshop is still there, in Rue Pierre-Semard, Paris IXe. There is a crossed-out sign advertising a butcher selling tripe and poultry, recalling the location’s former function. The Caracas-born artist adopted it as early as 1960, when he moved permanently to Paris to bring his ideas and “debates with the people of the world who were then in the capital.” A few years later, he might have chosen New York, but when he first came to Paris with his wife in 1955, the French capital was still the center of the art world. Almost sixty years later, the studio is dedicated to the technical experiments of the maestro, as he is called here. It even had to be extended, first with two spaces in the courtyard for production and restoration, and, in the last two years, in a new location further north.

For the Cruz-Díez venture mobilized a lot of people around him: two for restoration, around ten for production and another ten for documentation and communications, without counting those in the foundation whose mission it is to promote and diffuse the work of the artist, and the workshop in Panama City, which produces monumental pieces. The whole family is on deck: children, grandchildren, and all the people connected to them. It is a far cry from the classic painter’s workshop, yet this is how Carlos Cruz-Díez described himself, willingly joining the Renaissance tradition where the artist made his own tools. Not paint tubes or brushes, though, but large tables on which to compose the works, machines that bend aluminum plates into U-shapes on which digital- or screen-printed strips are glued.

Tools, pliers, scissors, tables, rolls of color... Welcome to the out-of-the-ordinary workshop of a color theorist who, at 95 years old, kept experimenting new solutions to give body to color independently of their supports, but in space itself. His grail. Cruz-Díez furthered Wassily Kandinsky's dream of making the image "a being floating in the air" and broke with the tradition of paintings that are frozen "for eternity". As he wrote in his book Réflexion sur la couleur (Reflection on Color, 2013), "when structuring my discourse, I understood right from the start that a work of art, in order to be contemporary, must before any aesthetic consideration provoke an event involving the spectator. A dialectic between the work and its viewer had to be established. To be in front of a kinetic work is a call to participation: you must move or manipulate it in order for it to be realized. The moment you stop, it ceases to exist. There’s no code to decipher or interpret; you are in front of an event that takes place in time and in space, with multiple effects, thus offering the possibility of choosing what actually suits you.”

And though associated with kinetic art and Op Art, sharing in their research on instability and movement, he differed from them by his particular relationship to color. For with the exception of Victor Vasarely, they all limited themselves to black and white.

A Custom-Made Machine
As a painter, Cruz-Díez created his first abstract works by painting on strips of cardboard. The restoration workshop has kept a sample as a record. Placed side by side, the spectator sees colors that are not physically present: this is the principle of additive colors, the starting point of his works, though he also explored the behavior of color by subtraction and reflection. He would realize that in order for the optical illusion to work, each band must be perfect. He needed more rigid supports: he created Rhodoids—a disaster as they ended up curling—and his aluminum profiles.

“Inspired by an industrial profile cutting machine used to make beams for buildings, in the 1960s he developed a machine to produce small aluminum profiles,” explains Mariana Cruz, granddaughter of the maestro running the workshop. Their large surface area allows the printing of several lines, but also very precise diagonals, which allowed him to develop his research on chromatic inductions. “He also created the screen-printing machine entirely himself, which did not exist on the market as he had imagined it.”

Both are still used today. Then came digital printing, including color gradients. Of course, computers have been involved since 1995. “Everything was like a score in my head. I would spend days making these little paintings—I had to find a way to speed up the process, so I invented tools. And, thanks to computers, I can see the result of a change immediately. Art and science are old friends,” the artist laughs. The workshop is a beehive, a place of work but also of exchanges, where thoughts and ideas are shared, especially in order to solve technical issues. Time is shared between production for exhibitions, fairs or commissions, and tests and trials requested by Cruz-Díez. As soon as a piece is finished, there’s a party, and everyone is summoned to reveal their responses and feelings. Each time, the artist listened with the curiosity of a child, always prepared to marvel.

Perfection or Destruction
Even when his own personal involvement was not necessary for the project, he would come every afternoon to supervise each production stage. Should a work not be perfect, it was destroyed, without discussion. The important thing is the experience: “the spectacle of color in motion.”

The workshop is also a place of research, with all its archives: a wealth of knowledge about the maestro, but also about periods throughout which he lived and the artists he frequented, for he kept everything. Catalogs, letters, invitation cards… Students regularly come to consult them, as do curators and restorers. Each work has an identity card with its Pantone numbers and its dimensions. Crucial information for restoration and all, out of principle, easily legible. Should the materials be damaged and the visual effect no longer working, the piece is no longer alive. The only option is to replace them. It is an approach that makes certain restorers, for whom the materiality of the work is crucial, jump. Though not in line with the framework given by art historian Cesare Brandi, it is coherent with the artist’s own approach.

The archives were also important for Cruz-Díez himself, who would willingly dive back into his notebooks to find aborted ideas, either because he had not had the opportunity to implement them, as was the case of the hanging labyrinth installed at the Galerie Mitterrand in Paris in 2016, or because of technical constraints. For his exhibition and La Patinoire Royale, Brussels, he developed a labyrinth in which visitors could circulate, composed of tinted glass panels that acted as a kaleidoscope. Carlos Cruz-Díez kept surprising us.

Art Martket Overview: The Ultra-Contemporary
Newsfeed
See all news
Paris: Open House at the Père Lachaise Workshops
Preemption: Romanelli's "Justice" Is Heading the Musée du Grand Siècle
A Diamond Cross Pendant Fetches €673,100 at Drouot
London: Will the "Portrait of Omai" Enter the Collection of the National Portrait Gallery?
Not to be missed
Artist Studio