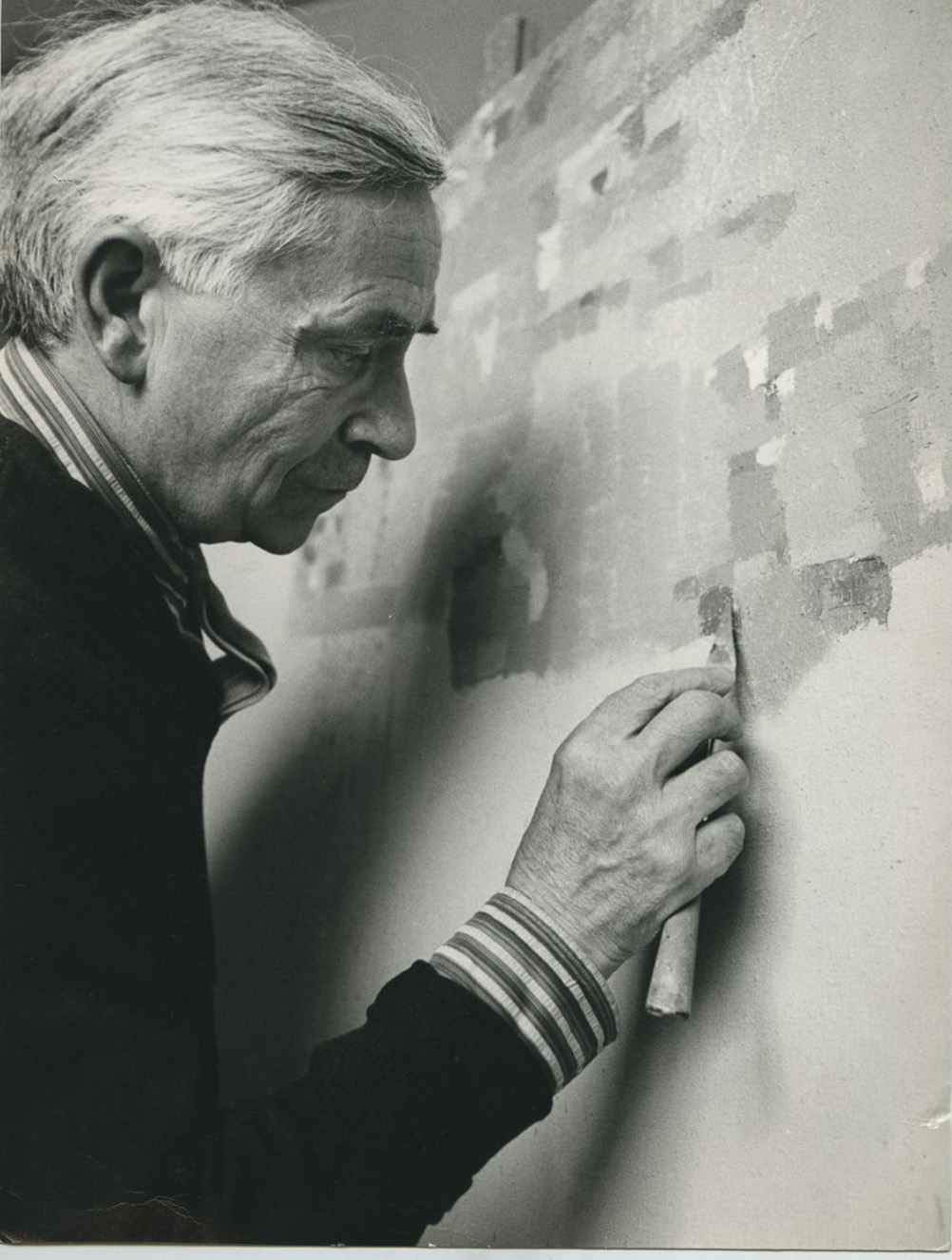 A multifaceted poet and visual artist, Camille Bryen (1907-1977) was free-spirited and eclectic: he had sporadic contacts with the group “Cercle et Carré”, was fascinated with Dada and Surrealism, was associated with the Parisian lyrical abstraction school as well as with “Informel” after the Second World War and was the theoretician of “Abhumanism” together with playwright Jacques Audiberti (1899-1965) in the 1950s.

The Debut of One of the “Glories” of the 6th Arrondissement
Born in Nantes in 1907, Briand, his real name, moved to Paris in 1929-1930. He became rapidly a popular character in the neighborhoods of Montparnasse and Saint-Germain-des-Prés. He was one of the “glories of the 6th arrondissement”—as shown in Georges Patrix’s (1920-1992, a designer, architect, and filmmaker) eponymous painting from 1950—side by side with Jean-Paul Sartre, Juliette Gréco, and Jacques Prévert. His skinny, almost childish silhouette and large smiling face were recognizable by all, his spiritual answers and sharp humor were proverbial.

Bryen’s first exhibition of automatic drawings inspired by Surrealism took place in May 1934 at the independent venue Le Grenier (the Attic) in the Latin Quarter, followed by five other exhibits until the war broke. In parallel to his artistic activity (mainly drawings at that time), he wrote poetry, lead conferences on art and psychology, made objects and published books. His most prominent projects before World War II were collaborations with the photographer Raoul Michelet (known as Ubac, 1910-1985) who was then part of Surrealist circles. The first collaboration was Actuation poétique (Poetic Actuation, 1935), which called for the interaction of poetry and art in city life so that they could accomplish their revolutionary potential to liberate mankind. L’Aventure des objets (The Adventure of the Objects, 1937) had similar goals; Bryen’s text was an analysis of the objects he had been making since 1935. Taking cues from Marcel Duchamp’s “Readymades” and the Surrealist objects of symbolic functioning, his witty and absurd objects, photographed once again by Ubac, made irruption in the everyday urban flow, often emphasizing the erotic and marvelous vitalism of the mundane.

Bryen’s Consecration After the War
During the war years, Bryen fled Paris and his traces led to Nantes, Bordeaux, Lyons and Marseilles, the latter was a city where many avant-garde artists gathered hiding in the countryside or trying to get a visa for the United States through Varian Fry’s Emergency Rescue Committee. Bryen returned to Paris in April 1945 and was consecrated once again as one of the glories of the effervescent Saint-Germain-des-Prés. He exhibited his drawings, watercolors, engravings and wrote poems; he started painting in 1949, producing spontaneous works in which the reigns of nature mingled evoking the world before the humans. The canvas Précambryen (1956, MNAM/Centre Georges Pompidou) alluded phonetically to the Precambrian (Précambrien in French), the earliest phase in Earth’s history, while also playing with the artist’s name—replacing the “i” of précambrien by a “y”, suggesting a “preCam[ille]Bryen” world—, visually evoking the raw growth of a life unobstructed by rational human planification. Painted the same year, and formally similar to Précambryen in its composition and color shades, Signe d’air (Air Sign, 1956) shows an accumulation of non-descriptive lines and multicolored little squares alluding to geological structures, fossils, and to the enigmatic abstract signs and diagrams found in cave art. As customary for Bryen, the materiality, the gesture and the painting process are pervasive, which is as also seen in Composition 133, of 1956.

In the decade following the Liberation of France, Bryen’s paintings were shown in the most important exhibits featuring Parisian abstraction: “L’Imaginaire” (“The Imagination”) at the Luxembourg Gallery in December 1947, H.W.P.S.M.T.B at Collette Allendy in 1948, the now mythical “Véhémences confrontées” (“Confronting Vehemence”) at Nina Dausset in 1951 that introduced Jackson Pollock to France, as well as “Signifiants de l’Informel” (“Signifiers of the Informal”) organized by Michel Tapié at Studio Facchetti in 1952. Bryen was claimed by every single abstract trend in Paris.

Beyond Abstraction: Hépérile éclaté and “Abhumanism”
The canonic post-war art history mentions Bryen mostly for his abstract paintings; notwithstanding, such a classification doesn’t give justice to the unquenchable creativity and multiplicity of his oeuvre. In 1953, in the throes of his glory as an abstract painter, he collaborated with his friends, the future New Realists Raymond Hains (1926-2005) and Jacques Villeglé (b. 1926), producing a “shattered” version of his iconic 1950 phonetic poem "Hépérile", a nonsensical neologism. In the flyer announcing the publication of "Hépérile éclaté" ("Shattered Hépérile"), Bryen acclaimed the advent of the unreadable, which is open to all readings, and qualified his poem as an organic excrescence or outgrowth challenging the “police of words”—the dictionary. The “shattered” version of "Hépérile" according to him was a poem to “dé-lire” (un-read), a pun with the French word délire (delirium, fantasy).

In parallel, Bryen, together with playwright Jacques Audiberti, was the proponent of “Abhumanism”, a sheer critique of the humanist Western civilization and its failure in a post-war post-utopian world. A kind of cultural/political theory in which art and literature had an essential role to play, Abhumanism was launched by Audiberti at the end of the 1940s; in 1952, he and Bryen wrote a major theoretical essay under the form of a sharp-witted dialogue, entitled "L’ouvre boîte. Colloque abhumaniste" ("The Can Opener. Abhumanist Symposium"). For Audiberti, Bryen’s art was key to the understanding of Abhumanism because it was blatantly and vitalistically materialistic, inviting one to reconsider, with modesty, the place of humankind in the universe, rejecting the supposed universality of any human(ist) value or ideal.

According to Audiberti, having distanced himself from the humanist pretension, Bryen was not motivated by glory and spiritual grandeur; his works didn’t “fit in the human race that made Dante or the Pantheon”, they simply invaded the white sheet like a “fungal growth” (Bryen.Poileur de pierre/ Bryen, Polisher of Stones,1949). Bryen’s illustrations for "L’ouvre-Boîte" evoke such spontaneous and uncontrolled/uncontrollable growth. The biomorphic shapes remind of human organs, plants, rocks, insects, or a spider’s web, putting all these on the same level, cutting short humanist hierarchies.

Bryen himself deemed Abhumanism central to the understanding of his art, and art in general: “Above all, it is important to note that one would understand nothing of the actual art if one doesn’t take into consideration Abhumanism” (Bryen, "Lettre ouverte à Audiberti" /"Open letter to Audiberti," circa 1951).

Bryen’s contribution to modern art and cultural history is still to be explored. Following his fame in the Latin Quarter, he fell in oblivion after in 1960-1970, when the abstraction he was associated with lost its preeminence. Regularly appearing at auctions, his fascinating, often small-sized (as Audiberti stated, they didn’t ever pretend to be a masterpiece!), works remain affordable for collectors. With the renewed interest and research on this artistic period in Paris, their value and appreciation will certainly grow in the upcoming years.

Monique Frydman: A Pictorial Chronicle of a Moment When Time Stopped

Anne Gruner: The Quiet Philanthropist
Newsfeed
See all news
Women on Paper Exhibition Kicks Off at the Rijksmuseum in Amsterdam
Paris: Christmas at the Carré Rive Gauche, Starts Today!
SAH Opposes Proposed Alterations to Library of Congress
Art Basel Places Its Bet on Asia and Digital
Not to be missed
Analyses