Like the phoenix, frontally or in profile, incised or in relief, cameos and intaglios transcend the ages, always being reborn and leaving their imprint. 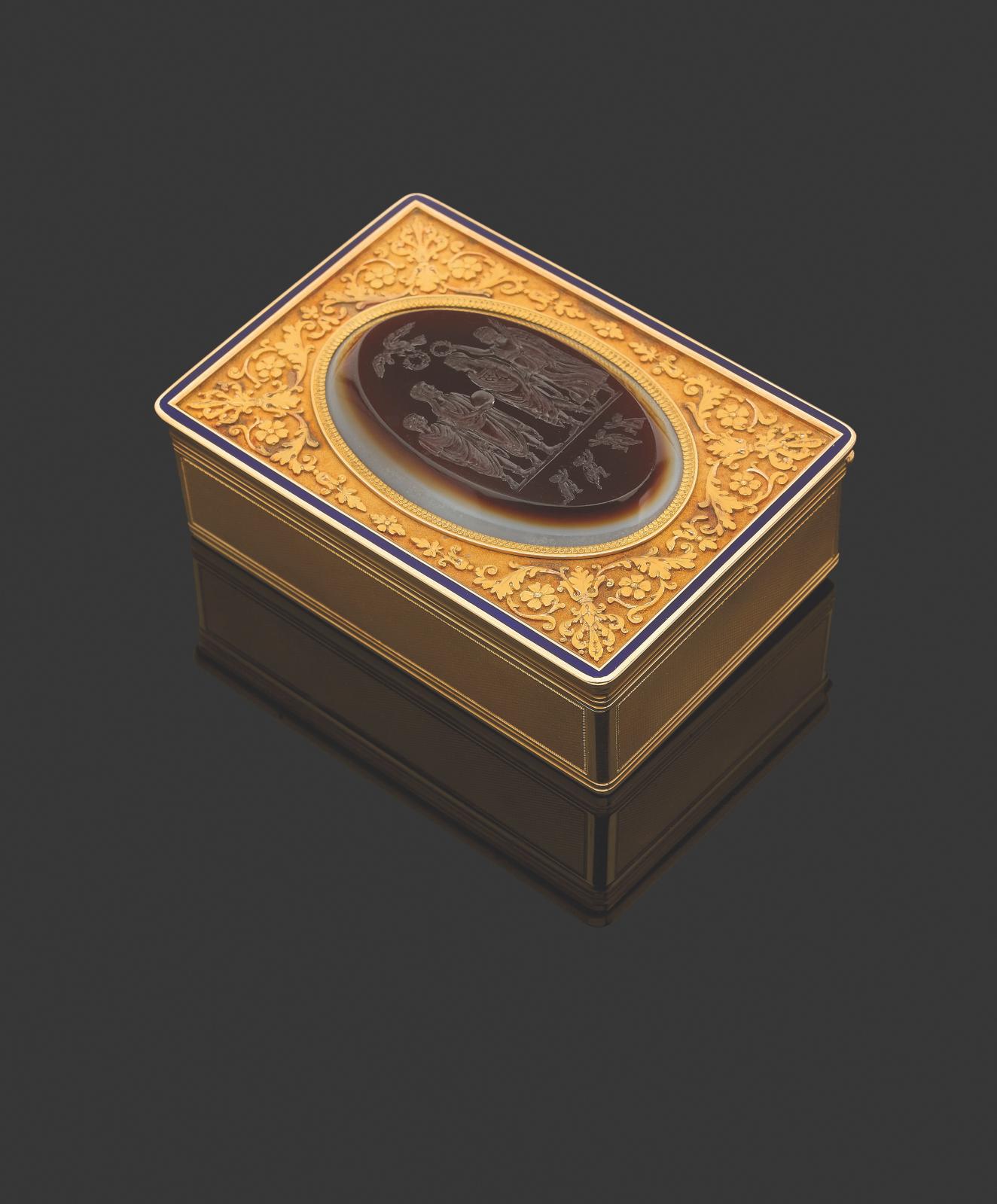 At the end of the Roman Empire, intaglios and cameos were put into the drawers of history until the Gothic period, when, in a quest for classical antiquity, they made a timid reappearance. The return of classical grandeur ushered them back into fashion during the Renaissance and the 17th century before they reflected the eclecticism of the 19th. Today, many institutions and collectors seek them out. The exhibition at the musée des Arts joailliers in Paris of Guy Ladrière’s rare collection until October 1st offers a beautiful opportunity to see them and leaves no stone unturned.

The Range of Materials
The time is long gone when the word "cameo" referred to the charming brooch that our grandmothers and old aunts wore on the lapels of their impeccable suits. They were usually made of shell, a soft material that appeared late. The glyptics arts is the demanding art of carving small works on carnelian, jasper, chalcedony, rock crystal, agate and precious stones using two methods: intaglios are incised or engraved into the stone, while cameos are in relief. Unlike jewelry, the choice is guided not by their market value but by the beauty of their colors resulting from different contrasting layers. While the method has barely changed since the beginning, it has been perfected. The stone is still abraded by a rotary tool. The sculptor superimposes layers and introduces natural polychrome. The work requires skill and great patience, which is what fascinates us.

Renaissance of a Precious Art
The seal was a signature object in distant civilizations, from Mesopotamia to pharaonic Egypt, archaic Greece, the Phoenicians, the Etruscans and imperial Rome. Intaglio was the only method used. Cameos appeared later, probably in Egypt during the Hellenistic period. They were small portraits with light profiles standing out against a dark background. Intaglios gradually evolved from seals to luxurious jewelry and symbols of power. The Romans liked them especially and commissioned carved stones to "adorn rings, serve as seals, commemorate a wedding, offer magical protection or remind people of their loyalty to the emperor," says Philippe Malgouyre, chief curator at the Louvre and curator of the École des arts joailliers exhibition. Being from a collection, the exhibition emphasizes research on the old stones by enthusiasts since the Renaissance. However, we learn that they were already rare, relatively costly one-off pieces. High demand fueled a thriving industry. Even today, it is sometimes hard to tell the difference between ancient stones and those from the 16th century, when they were bought to be mounted in jewelry and often re-engraved, a practice that lasted until the 19th century. Copies often have personal details that make them original. On February 25, 2021, Laval Enchères dispersed a precious late 19th-century collection of ancient pieces set in rings. The group includes about 40 intaglios and netted €387,500, including €23,790 for a ring from the reign of Augustus set with an oval intaglio engraved with a nude hero holding a sword—probably the emperor himself in the guise of Mars Ultor—and €34,160 for a brown and beige agate featuring a dramatic episode from the Trojan War.

Stone Engravers
In December 2021, a commissioned cameo depicting a sleeping nymph in an erotic pose—the only one of its kind made by the Miseroni, famous hard stone sculptors from Milan in the latter half of the 16th century—fetched €48,100 at Pierre Bergé & Associés. In 1576, Holy Roman Emperor Rudolph II, who had an insatiable appetite for precious objects and curiosities, attracted Ottavio Miseroni to Prague, where three of his brothers soon joined him. Their workshop provided the emperor and his court with all kinds of mounted stones, cut rock crystals and cameos. They had perfect command of their craft, skillfully using the colors of the semi-precious stones they cut into cameos. The Louvre launched its 12th “Tous Mécènes!” fundraising drive to acquire a cameo featuring Venus and Cupid by Giovanni Ambrogio (1551-1616). Some 5,600 donors ensured that the million-euro goal was reached in February, and its lid joined the bowl already in the museum’s collections. Many names left their mark on history in the 18th century, when stone engravers prospered. Every court had its master. Carlo Costanzi worked in Rome—Mariette wrote that his portraits “look as though they were carved out of flesh”—the Brown brothers mainly for Catherine II of Russia and Jeuffroy of Rouen for the king of Poland. In François Boucher’s painting of Madame de Pompadour in majesty, she wears an ancient-style cameo featuring Louis XV on a bracelet. She loved cameos and took engraver Jacques Guay under her wing. On January 12, 2019, an agate cameo by Nathaniel Marchant (1739-1816), which met the demands of just a handful of lucky buyers, fetched €46,800 in London. According to The Antiques Trade Gazette, it was bought by a sharp-eyed dealer. On March 18, 2016, a gold ring set with a carnelian intaglio by the same London craftsman sold for €36,250 under the hammer of Beaussant Lefèvre & Associés at Drouot. These noble products were made for royalty, but when the first tourists began going to Italy the cameo became an essential souvenir.


Imperial Model
Napoleon Bonaparte, consul and then emperor, sought to equate his regime with Roman grandeur. He fervently admired engraved stones, commissioning them as gifts. They featured his imperial profile, and high society followed his lead. An 1805 article in Le Journal des dames said: “The stylish woman wears cameos on her belt, cameos on her necklace, a cameo on each of her bracelets, a cameo on her diadem…” The “Empire” sales at Fontainebleau’s Osenat Auction House regularly fetch high prices for outstanding pieces made for the emperor. In December 2018, a neck medallion with his profile in the antique style, entirely paved with diamonds, sold for €325,000. It was made by Nicola Morelli, one of the most famous stone engravers of the time, and given to the Duke of Bassano. A cameo of similar workmanship and subject, but in white agate, netted €290,000 at Fraysse & Associés in 2014. In 2019, a chalcedony cameo of a bacchante with vine branches in her hair fetched €125,000 at Osenat. It was made by Benedetto Pistrucci, who was spotted by Élisa Bonaparte, the Duchess of Tuscany. He also worked for her sisters Pauline Borghèse and Caroline Murat, the queen of Naples, before leaving to exercise his talent in Paris, then in London after the fall of the empire. As the bourgeoisie expanded during the July monarchy, glyptic art became more democratic. The small town of Torre del Greco at the foot of Mount Vesuvius was the main center. This was also when seashell, which is softer and easier to work with, took center stage. The decline began around 1860, as pearls, colored stones and diamonds superseded engraved stones in jewelry. In Sandro Botticelli’s admirable Portrait of a Young Woman at Frankfurt’s Städel Museum, the beautiful Simonetta Cattaneo is wearing “Nero’s Seal”, a carnelian from the Medici Collection depicting Apollo and Marsyas. Lorenzo de’ Medici, Rubens, Princess Palatine, the duc d’Orléans, Louis XIV’s brother, and banker Pierre Crozat loved glyptic art. Today, they say Rihanna is a fan.

Five Hundred Years of Clocks and Watches in One Collection

Two Emeralds Are Better Than One
Newsfeed
See all news
Colorado Artists Unite to Advocate for Missing and Murdered Indigenous People
Tourist Denied A With Meeting Pope Francis Smashes 2 Antique Statues
Digital Illustrator, Grzegorz Rutkowski, is Bigger Than Picasso on AI Platforms
Austrian Builder-Owner Award 2021 To Be Announced
Not to be missed
Market Trends