Cordovan or cordwain ("from Cordoba"), also called gilt leather, was produced and used throughout Europe. A luxury technique of which few examples have survived. 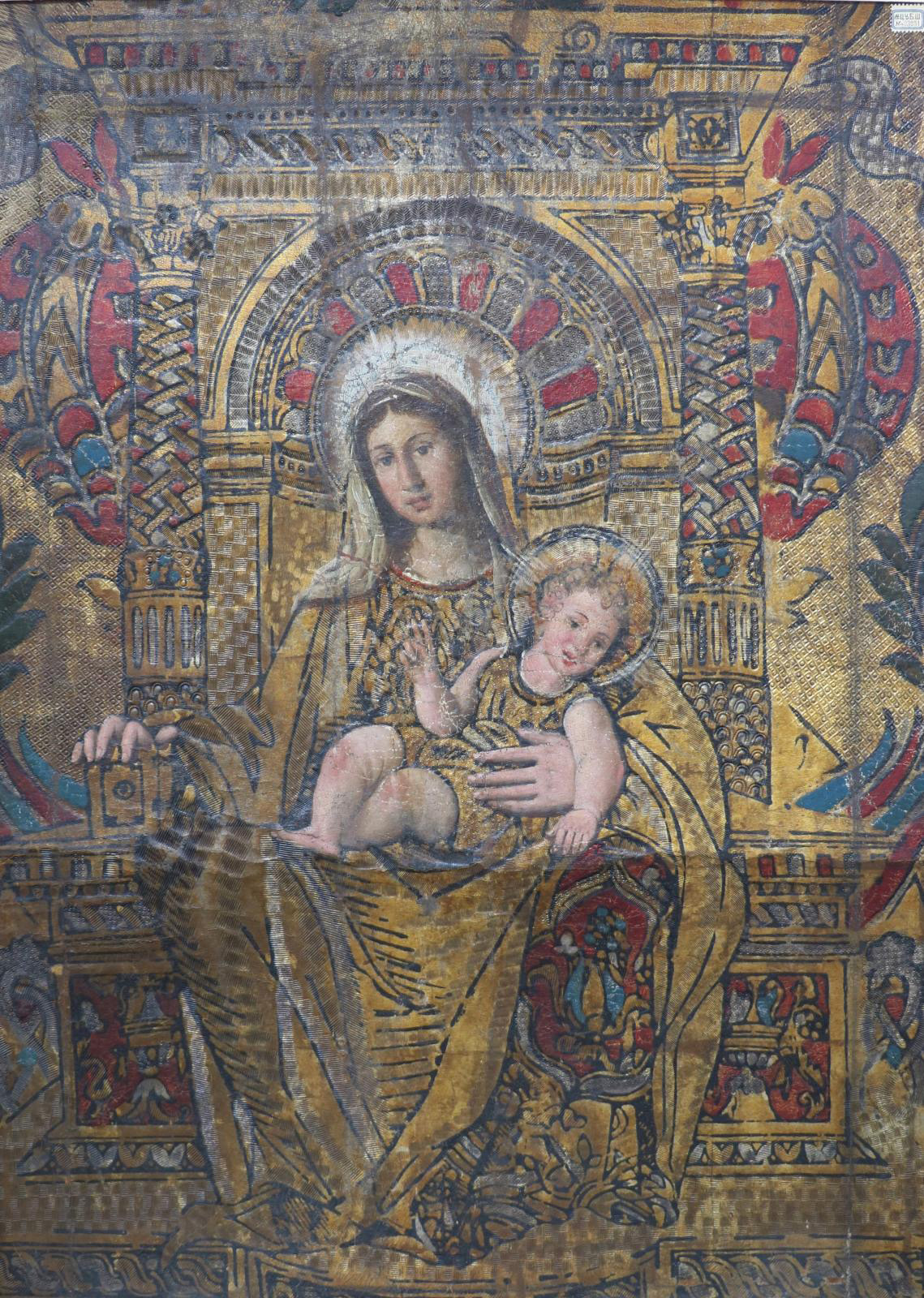 Gilt leather was used throughout Europe, especially between the 16th and 18th centuries, to decorate the interiors of wealthy houses. It was mainly used for wall hangings, but also for table and furniture coverings, bedspreads, floor mats, screens, and to upholster seats and cushions. In the religious sphere, it was used for altar hangings and sometimes for priestly garments. These decorative leathers, of which there are few examples today, appeared in Cordoba at the end of the first millennium, shortly after the Arab conquest. Their production technique, inspired by Middle Eastern and North African methods, were adapted and developed by local craftsmen with longstanding experience in leatherwork. They became highly popular and were then produced in most of the Iberian peninsula's major cities, reaching their peak in the 16th century. At that time, they were exported in large quantities to most European countries, where they were rapidly copied.
Resulting from a stereotyped production method, gilt leathers were defined by their structure, containing six superimposed layers. The base layer was the leather support (sheep, goat or calfskin); the second parchment glue, and the third silver leaf. This layer was often covered with glue to prevent the metal from oxidising. Then came a layer of "yellow varnish (or "gold varnish") consisting of plant resins heated in flax oil. The sixth and final layer, which was optional, consisted of oil paint. So gilt leathers contained no gold: it was the "yellow varnish" applied to the silver that created the golden shade. Without this gold varnish, the product was known as "silver leather". Depending on their outer appearance, gilt leathers were classified as "flat" or "embossed". To decorate the flat type, before the colour was applied, the contours of the motifs were generally created using a carved, inked wooden plate. These flat leathers were often embellished with "engravings": prints made with stamps ("tools") designed to enliven the backgrounds or emphasise details. Embossed "repoussé" gilt leathers were very different, as they were in relief. They appeared in the Netherlands in the 17th century, and their production required the use of carved intaglio moulds and a heavy press. There were two types of decoration: one ''exclusively embellished with repeated patterns", which were the most common, and "historiated" gilt leathers, i.e. with human figures. Rare but often highly spectacular, these were generally produced by top-rank though usually anonymous artists. They had different characteristics depending on their country of origin; these help to pinpoint their provenance.

At the meeting point of influences
The gilt leathers of Spain – which the Spanish called and still call guadameciles – are all flat, and usually engraved. Their designs – very rarely found nowadays – featured repetitive geometric figures characteristic of the Islam-influenced Mudejar style, or Renaissance style motifs, or sometimes a combination of both. In the early 17th century, patterns were influenced by the Baroque style, at a time when Spanish gilt leathers were starting to decline. They eventually went out of fashion without altogether disappearing from the rest of Europe.
In Italy, the first workshops appeared at the end of the 15th century, and Venice became the most important centre. In the 16th century, designs with Renaissance motifs were also strongly influenced by Islamic styles from both Spain and – particularly in Venice – the Middle East. In the 17th century, Baroque art and the designs of fabrics of that time were found in Italian patterns, which were subsequently influenced by the different French styles of the 18th century.
The embossed or repoussé technique, which was perfected in 1628 in the northern Netherlands (The Hague), led to completely new representations in very high relief. These new designs, highly popular everywhere, were largely exported and rapidly copied. In the 18th century, they were mainly inspired by the designs of leading French ornamentists. In the southern Netherlands, i.e. present-day Belgium, the workshops in Malines, Brussels, Antwerp and Liège soon adopted the repoussé technique while continuing to produce flat engraved gilt leathers and historiated hangings.
The gilt leather industry also developed in England, and especially London. In the first half of the 18th century, English manufacturers excelled in the production of hangings and screens decorated with "chinoiseries".

“So gilt leathers contained no gold: it was the "yellow varnish" applied to the silver that created the golden shade.”

A French craze
In France, the kingdom's elite developed a craze for Spanish gilt leathers during the 16th century. The first workshops were created in Paris, notably by Jehan Fourcault and Julien Lunel, and were then encouraged by Henri IV. Outside the capital, others started up in Rouen and Lille, and in the Rhône Valley in Lyon, Carpentras, Aix-en-Provence, Marseille and above all Avignon. In the first half of the 17th century, two production centres predominated. In Paris, Jean-Baptiste Delfosse, the best-known producer, supplied the royal family, as we can see from the Journal of the Garde-Meuble de la Couronne. Unfortunately, none of these Paris decors has survived. In Avignon, the most famous workshop belonged to the Boissier family, and passed from father to son for over a century. In 1712, the family's most celebrated exponent, Raymond Boissier, published a sales catalogue; a copy of this is now in the Avignon library.
Today, over a thousand antique gilt leathers are listed in France in public and private collections. Although there are far fewer historiated versions, their decoration is the most striking, as witness the hangings now in the Château d’Écouen and one illustrating the retinue of "David Victorious", once on show in the Château de Ferrières and then in the Hôtel Lambert in Paris. Although plentiful, the number of surviving decorative gilt leathers with repetitive patterns is nowhere near the huge quantity that once existed. They are found mainly in numerous chapels and churches in the Alps and the Pyrenees.
Gilt leathers and their sumptuous designs disappeared everywhere at the same time, at the end of the 18th century. They soon fell into oblivion, despite intermittent attempts to revive them (particularly in France) in the late 19th century and up to the present day, but using very different techniques and materials.

S as in Sulphide

D as in Damascene
Newsfeed
See all news
3 Generations of Wyeth Painters on View at Farnsworth
Italian Museums Help Vaccination Campaign
Wildfire Burns Down Cape Town University’s Historic Campus Library
Leonora Carrington’s Mexico Home and Studio to Open to the Public
Not to be missed
Glossary
B for Berain
Trained as an engraver, Jean Berain explored the freedom of an art…
Glossary
C for Crystal
Lead crystal crowned centuries of research and experimentation.…
Glossary
L for Lace
Lace is an intricate, openwork fabric without weft or warp featuring…
Glossary
G for Glass
In the early 17 th century, competition to equal or even surpass…