Thrusting out its emblematic skirted skull and sharp horns, this fearsomeTriceratops is coming to Paris, where its unusual size is sure to cause a stir. 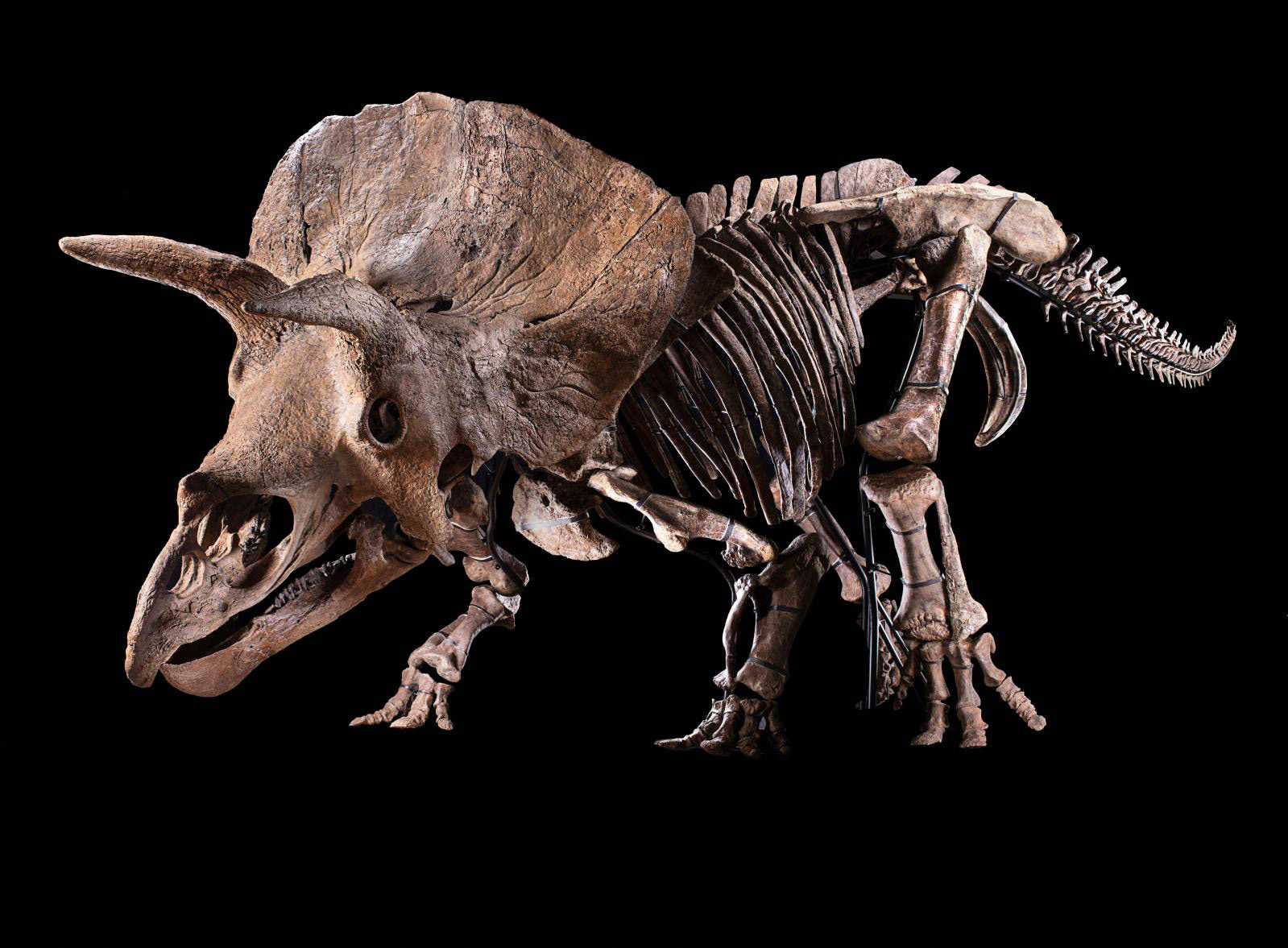 The impressive Triceratops Horridus skull sold at Binoche et Giquello (€177,800) on March 7, 2017, is still a fresh memory. This time, the Parisian auction house has the pleasure of inviting an entire individual to its “Naturalia” auction—a yearly event where an Allosaurus fetched €3,067,400 on October 13, 2020. Named Big John for its imposing size, this large male roamed the flood plains of Laramidia, the island-continent that stretched from present-day Alaska to Mexico during the Late Cretaceous Period 66 million years ago. The Triceratops was one of the last herbivorous dinosaurs to appear before the massive impact of a huge meteor on the surface of the Earth caused the great Cretaceous-Paleogene extinction.

In May 2014, geologist Walter W. Stein Bill discovered the dinosaur’s bones at the Hell Creek formation, a fossil-rich site in South Dakota. Still encased in their rocky gangue, they were bought by Zoic, an Italian company that restores prehistoric fossils. In October 2020, the skeleton reached Trieste, where it was cleaned and studied with help from the paleontology departments at the Universities of Bologna and Chieti. According to the researchers, this is the biggest Triceratops ever found (approximately 8 m/26.25 ft long by 2.80 m/9.19 ft high). The skull alone is especially large: 2.62 m/8.61 ft long, 2 m/6.56 ft wide and weighing 700 kilos/1,543.24 lbs. The largest horns are 1.1 m/3.60 ft long and 30 cm/11.81 in wide at the base.

This specimen is twice the size of the two largest Triceratops ever restored by Zoic, which are now in the Boston Science Museum and the national science Museum in Gwacheon, South Korea. It is also one of the most complete: over 60% of the skeleton and 75% of the skull have been found (the missing parts will be replaced by resin). Big John will be displayed in the attack position, squarely planted on its front legs. Paleontology meets art here: the aggressive pose is based on Charging Bull, the famous bronze bull by Sicilian sculptor Arturo Di Modica that has stood in front of the New York Stock Exchange since 1989.
NATURALIA
Salle 5-6 - Hôtel Drouot - 9, rue Drouot - 75009
Binoche et Giquello
Info and sales conditions

Print the article
Newsfeed
See all news
Bonhams Opens Salesroom in Paris
Dutch Monument to Those Murdered by the Nazi Regime Opens – But Also Meets Opposition
Giant Violin Floats Down Venice’s Grand Canal
Picasso Exhibition to Finally Open in Toronto in Early October
Not to be missed
Spotlight
A Table Commemorating the Liberation of France by the…
Mystery shrouds this unique, previously unknown table made in 1947…
Spotlight
A Treasure of Gold Coins Found in Brittany
In 2019, a couple and three stonemasons found a trove of coins dating…
Spotlight
Indian Motorcycles’ Legendary Big Chief
Made for the road, Indian’s red-liveried, interwar, upscale Big…
Spotlight
On the Road with André Becker’s Carriage Collection
The auction of André Becker’s carriage collection is a major event…