A stone’s throw from Chantilly, the Royal Abbey of Chaalis has kept its secrets hidden for a very long time. An investment plan and new management will awaken this sleeping beauty. 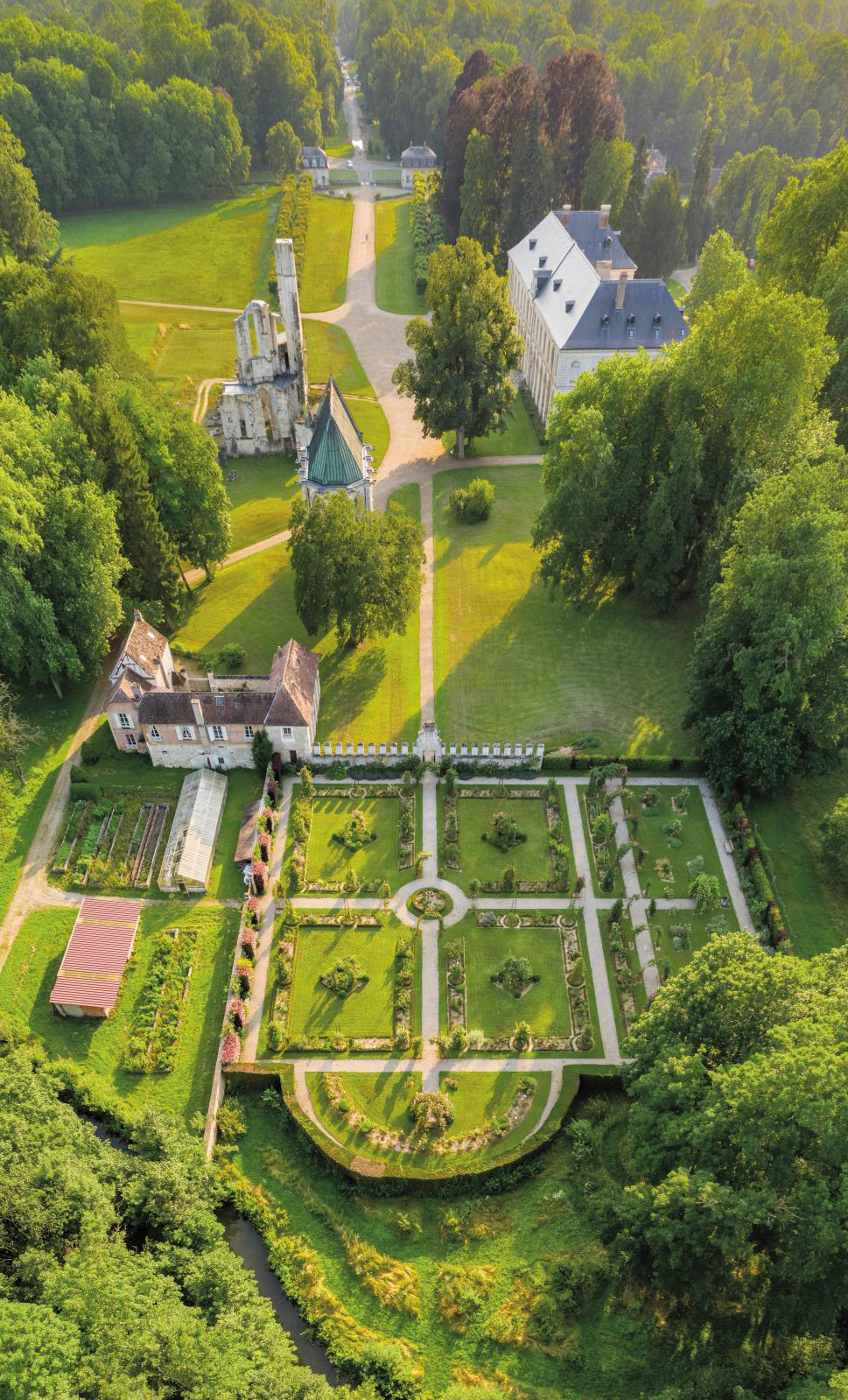 Royal Abbey of Chaalis, east-west perspective with the rose garden in the foreground.
© Bruno Cohen

Royal Abbey of Chaalis, east-west perspective with the rose garden in the foreground.
© Bruno Cohen

Founded as an ephemeral Benedictine priory in 1100, the Royal Abbey of Chaalis has everything it takes to become a major heritage site: the Romantic ruins of a Cistercian Abbey that ranked among the richest of its time under the royal patronage de Louis VI, the Fat (r. 1108-1137); a chapel boasting one of France’s only remaining Renaissance frescoes; a thousand hectares (more than 2 thousand acres) of woodland, French and English-style gardens, an arboretum and a rose garden; and paintings amassed by Nélie Jacquemart, an insatiable collector with eclectic tastes as well as a little-known painter whose influential husband ranked among France’s richest men in the 19th-century. Yet very few people other than researchers know about the site. This fact did not escape the Cour des comptes (editor’s note: the French body that oversees public spending), which in July criticized how the Institut de France, the abbey’s owner, runs the place: “A lack of means or attention… has left [Chaalis] in a state of abandonment for several decades… [There is] little work, no scientific policy, insufficient maintenance, restoration and safety/security measures, mediocre results compared to the potential and deficient administrative and financial management.” The October 2020 announcement of Alexis de Kermel’s appointment as the new general administrator and the launch of a €10 M multi-year investment plan almost went unnoticed, although things are starting to look up now. “My job,” says Mr. de Kermel, who is involved on every front, “is both a monumental challenge and a fantastic opportunity to give Chaalis the place it deserves in the cultural landscape.”

Multiple Projects
The estimated cost of the monumental project is put at €12 M between now and 2024. The works involve updating the security and safety systems, bringing the wiring up to standard, restoring enclosed and roofed areas, connecting all the buildings to the heating network, shoring up the ruins of the abbey church, overhauling the plumbing system, creating a sewage system and restoring the gardens and its works (bridges, moats, etc.). At a time when heritage sites can no longer avoid thinking about their carbon footprint, a geothermal power plant, the garden’s biodiversity and the planting of a conservation orchard (2022-2024) must be considered. The Institut de France is making a large investment, but Chaalis must also increase its own resources, which for now are limited to ticket sales, low amount of sponsorship, concessions from the Mer de Sable (editor’s note: an inland sand dune straddling the towns of Ermenonville and Fontaine-Chaalis) and estate revenues from the surrounding woods. Seeking to reconnect with the site’s great history, the Institute plans to bring back the business model that allowed the abbey to become one of the area’s most powerful abbey in the 16th century by selling homegrown farm products. A restaurant in the rose garden house (2023) and three self-catering apartments in the stable (2022) will rely on this 500-year-old model. As impatient as he is efficient, Mr. de Kermel asked chef Nicolas Castelet to open a tearoom, which began operating in May. The new administrator does not make promises of sweeping change lightly. In less than a year, he has already had the sanitary facilities redeveloped, the surrounding area and parking lot secured, the moat's water supply canal cleaned and part of the museum redesigned.

The cultural project is probably the toughest part of the job. In recent years, the romantic aesthetics of the garden and ruins have eclipsed the collections. How can the abbey bring them back to center stage? In the spring, a new visitor trail following a chronological layout, and a single ticket for the garden and museum were unveiled to showcase the site’s treasures. Visitors stroll through the park and its medieval ruins before coming upon the chapel with Primaticcio’s frescoes and exploring the museum and collections. “Not a week goes by without finding an Italian primitive painting in some nook or cranny or an object from the Burmese and Indian collections that’s never been studied before,” says Mr. de Kermel. “Surprisingly, Chaalis has suffered from the popularity of the Jacquemart-André museum in Paris, which succeeded in making people believe that work on the couple's collections, especially Nélie's, is over, which it isn’t. Every object must be documented and studied. A magnificent field of research is opening up.” He almost seems to be casting a line to interested researchers and scientists. Renaissance specialists overlooked the frescoed abbey chapel, whose vaults have been undergoing restoration since September. A 2006 refurbishment confirmed that they are by Primaticcio (1504-1570). Commissioned about 1540 by Ippolito d’Este, a cardinal representing the Duchy of Ferrara’s interests at the court of King Francis I, the Sistine Chapel of the Oise and its Christ the Redeemer will be highlighted by a new interpretation and display.

Collections in the Making
Sweeping changes are planned for the museum, which visitors have disregarded until now. Nélie Jacquemart transformed Chaalis into a palatial theater of society receptions where her acquisitions of European medieval art and French, Italian and Flemish paintings were cheek-by-jowl with objects that she brought back from her travels in Egypt, Turkey and India. This characteristic 19th-century eclecticism handicaps the museum’s identity, but the work planned on the collection aims to fix that. Some rooms will be refurnished and 25 major works from the collections, including two panels painted by Giotto for the church of Santa Croce in Florence and Philippe de Champaigne’s portrait of Cardinal Richelieu, will be redistributed throughout the rooms. By the end of the year, a scientific committee headed by heritage curator Anne Claire de Poulpiquet, who was appointed in July, will also be up and running to see how the works can be more appealingly laid out without contravening the clauses of the bequest.

Shrouded in mystery, the collector’s life is worth exploring. A student of Léon Cogniet, she became a renowned portraitist of the Paris bourgeoisie but has drawn little interest from historians. A catalogue raisonné of her work, which was shown at the Salon, is sorely lacking. Her only well-known painting is one of her husband Édouard André, whom she married in 1881 on the eve of her 40th birthday. Owner of the Gazette des Beaux-Arts and president of the Union centrale des Arts décoratifs, he was a key figure in the art world until his untimely death in 1894. His wife outlived him by almost twenty years, which she spent traveling the world and putting her stamp on Chaalis. “Given the current state of research, it’s really challenging to catch up and put this woman back at the center of Chaalis," says Mr. de Kermel. “Hopefully, the increasing interest in female artists will allow us to do that. I’m calling upon researchers, universities and curators to shed light on this woman’s story and, more broadly, on Chaalis. Chaalis is a goldmine. It’s time we explained why it is so unique.”

The Chancellerie d’Orléans: A Miraculous Renaissance
Not to be missed
Cultural Heritage