Bernar Venet: The Colossus with Feet of Steel

France is devoting two exhibitions to Bernar Venet. A chance to take stock of his market: a rising curve. 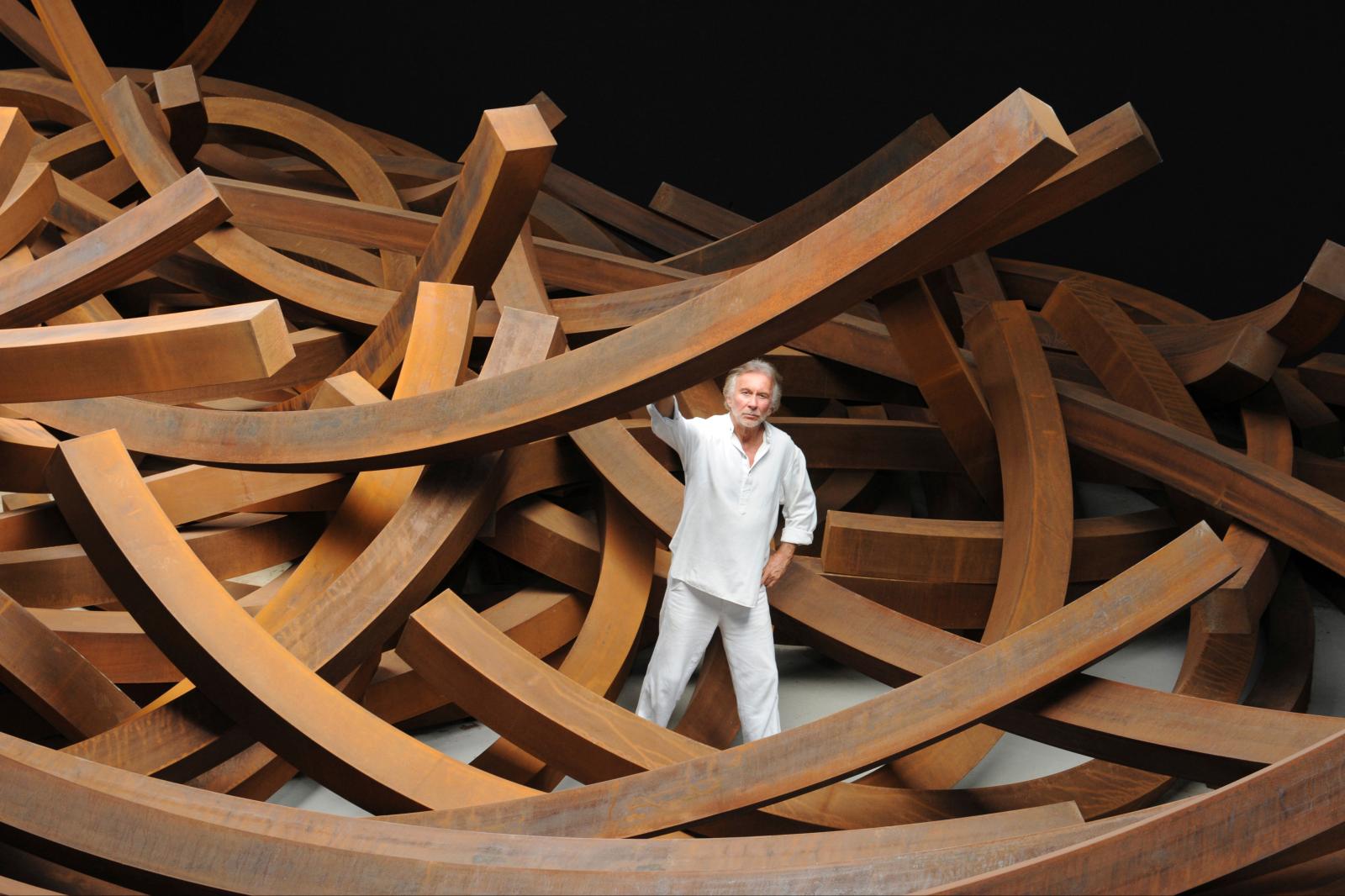 While long cold-shouldered by the French intelligentsia, Bernar Venet is familiar to the general public. As we remember, in 2011, the Nice-based artist laid out seven of his steel ribbons in the gardens of the Château de Versailles. But the sculptor (who divides his life between New York and Le Muy, in the Var region) forged himself a name beyond the borders of his native country. Several foreign museums from New York to Hong Kong have dedicated exhibitions to him, and his works are well-regarded by international collectors. Today, France is paying tribute to him in two major exhibitions: one covering his six-decade career at the MAC in Lyon – the most comprehensive retrospective ever staged – and another focusing on his first conceptual years, from 1966 to 1976, at the MAMAC in Nice. An occasion to take stock of his market.

Ostracised in France?
Why did France not give him a more enthusiastic reception? Thierry Raspail, director of the MAC and curator for the retrospective, is full of regrets looking back: "Bernar somehow slipped under our radar," he says apologetically. It's true that he left for New York in 1966 when he was 24, encouraged by his friend Arman, who had moved there. He made his way into the avant-garde circle, exhibiting alongside Donald Judd, Sol LeWitt, Carl Andre and Dan Flavin – with considerable success, too, because as Fondation Venet director Alexandre Devals recalls, "Three years after he got there, the New York Cultural Center staged a retrospective establishing him as a pioneer in conceptual art." Straight afterwards, the sculptor took part in several international ritual gatherings, including the São Paulo and Venice biennials and the Kassel Documenta. His art, initially based on mathematical theories, took a new direction in the mid-Eighties when he began creating monumental sculptures that rapidly superseded his previous work: "They were easily identifiable and became his trademark," says Alexandre Devals. In France, his detractors criticised their radical aesthetic. Today, his colossal pieces are found in some twenty cities, including Berlin, Cologne, Geneva, Tokyo, Seoul and San Francisco. The opening of his foundation in Le Muy in 2014 established his reputation, particularly in his native country. Some of his sculptures have now taken up residence in its five-hectare park, where they can be admired by art lovers during the summer.

A Constantly-rising Market
According to Artprice, his auction results have described an ascending curve since the early 2000s, accelerating over the past decade. In 2017, his hammer prices totalled some €2 million for around 50 lots: the highest figure ever recorded. Of course, this doesn't compare with the figures posted by the current stars, Peter Doig and Christopher Wool, whose sales came to €52 M and €45 M respectively. Venet's results are closer to those of Carl Andre and Dan Flavin, while remaining below those of Sol Lewitt (€3.9 M) and especially Donald Judd (€10 M). However, "his market is solid, rising steadily without any disproportionate prices," says Stefano Marini, director of the Sotheby’s France contemporary art department.

"Collectors are receptive to the instantly-recognisable language of his monumental sculptures, and find this intensity in the smaller pieces as well." "Quatre lignes indéterminées", the work garnering the highest bid, €556,000, was sold in Qatar in 2009 by Sotheby’s Doha. The four-metre piece is also the largest ever auctioned. Again under Sotheby's hammer, Venet's American record was established in May 2017 by a two-metre quintuple arc (€383,000), while in December 2017, a double arc of a similar size fetched €333,000 in Paris. Meanwhile, his drawings are more affordable, as might be expected, generally selling for between €5,000 and €20,000. In France, Venet ranks number five among the active artists, behind Pierre Soulages (€20 M), Robert Combas (€3.7 M) and Claude Lalanne (€3.5 M), but ahead of Daniel Buren (€1.1 M).

Monumental Commissions
However, we should factor in the results achieved by galleries to get an accurate picture of the sculptor's activity. "These have followed the same path as those of auction houses," says Alexandre Devals – with a decidedly more substantial turnover, because Bernar Venet has always surrounded himself with the right sort of people. Around his main gallery, Blain Southern (present in London and Berlin), gravitate the satellites: the Ceysson & Bénétière Gallery, present in Paris and Luxembourg, and Paul Kasmin and De Sarthe in New York and Hong Kong. "The "Arcs" are more sought-after than the "Lignes indéterminées", which are themselves more popular than the "Angles" and the new mural sculptures called 'GRIBS'," says Loïc Garrier, who runs Ceysson & Bénétière in Paris. The galleries also fund projects for monumental pieces, which cost over €1 million. At present, commissions are coming from private collectors, inspired by the sculpture park vogue. "Half a dozen are in the pipeline for the US, China and Belgium," says the foundation's director. If confirmed, they will be made in Hungary in a dedicated production factory, where 27 people now work. Next spring, an outsize sculpture, "Arc majeur de 185.4°", will make its appearance at km no. 99 of the E411 motorway between Namur and Luxembourg. A 60-metre high structure with a diameter of 75 metres, this "Arc majeur" looks set to cut a dash as the largest sculpture in the world.

The Memories of Anne and Patrick Poirier
Newsfeed
See all news
Paris: Open House at the Père Lachaise Workshops
Preemption: Romanelli's "Justice" Is Heading the Musée du Grand Siècle
A Diamond Cross Pendant Fetches €673,100 at Drouot
London: Will the "Portrait of Omai" Enter the Collection of the National Portrait Gallery?
Not to be missed
Art Price Index

The artist, as a witness to his time, produced visions of a changing...

From Iznik ceramics to turban stands, accessories created in the...