Among all the existing containers, the cylindrical shape with its broad shoulders is the most recognizable. However, the history of the wine bottle augured creative freedom that finally bowed to the demands of gourmets. 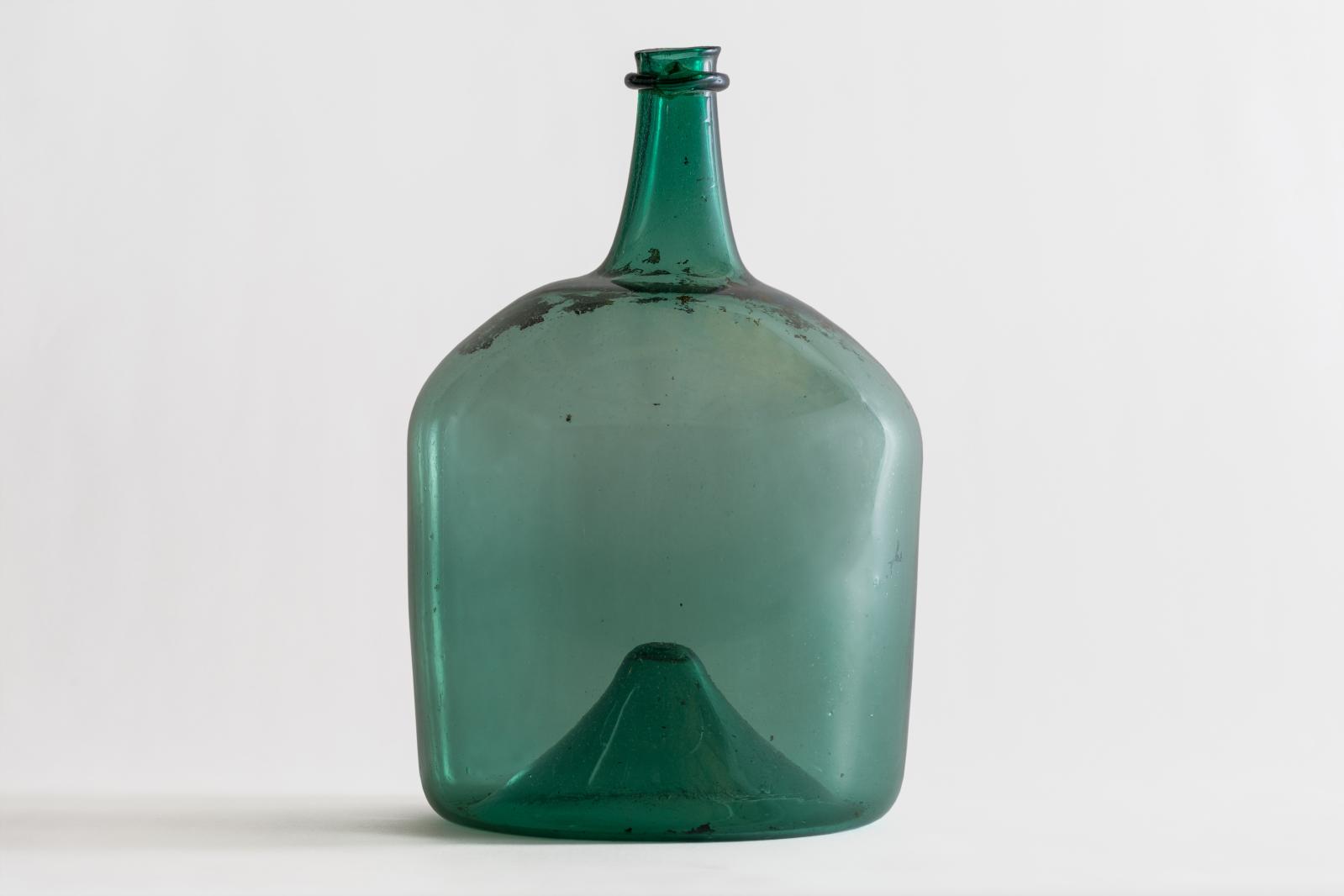 Once the art of glassmaking had been mastered, the invention of the blowpipe in the first century BCE enabled the first bottles to be made. Superb, square-shouldered, astonishingly modern-looking carafes have come down to us as examples of antiquity's refinement. They were only intended for serving: until the 17th century, wine had to be consumed before the spring following the harvest; otherwise, it could turn to vinegar. After the fall of the Roman Empire, the subtle art of glassmaking declined with remarkable speed in the West. Medieval glassware was dull and modest. Iridescence gave the corroded age-old silica spectacular reflections that left the drinkers of the day unimpressed. It was not until Venetian crystalline glass was developed in the late 15th century that fragile carafes and bottles were adorned with fine decoration impossible to achieve with ordinary glass, which was sheathed in straw, braided wicker or leather.

In the 16th century, one glassworks after another opened, making bottles with shapes based on metal or faience tableware. Often flat and spherical, they were also used as canteens and were not always elegant. In Argonne, in eastern France, the colors ranged from light to bluish-green depending on the metal oxides in the silica and the fluxes available in that forested region. Pear- and bulb-shaped bottles were almost always covered in wicker to protect the glass from breakage and the contents from harmful light. Before the time of the cork, it was also necessary to compensate for poor sealing, which was seldom airtight. Fragility was a major issue in Europe, but in the East it had not been a problem for a long time: in the 17th century, Persian Shiraz wine was already being transported in sturdy, colored bottles that soon competing with British glass.

The English Bottle Revolution
In 1642, the eccentric Sir Kenelm Digby (1603-1665) produced flasks that brought an end to the West’s technological backwardness. Comfortably imprisoned in Winchester House, he developed a remarkably thick black glass (3 to 7 mm, 0.12 to 0.28 in) in a coal-fired furnace in the old glassworks of the bishop’s palace, as well as a new bottle shape. This was a timely invention: wine importers sourced their supplies from the Atlantic coast, loading barrels onto ships and bottling them in English cellars. The late 17th-century rediscovery of the cork improved the conservation of wine, which was soon found to be storable if the right precautions were taken. The new, dark bottle, which allowed the wine to age, was sometimes stamped with a glass seal bearing a name or vintage. Round, stable shapes became truncated cones, enabling them to be easily laid down, stored and transported in cases. In the 17th and 18th centuries, Newcastle was a production center for these bottles. The city’s glassworks used molds to make regular-formed pieces that could be more or less standardized.

In France, glassmaking lagged behind—and a lack of technical skills was not the only reason. The "French serving style" discouraged good art: bottles were put into coolers that were themselves placed on sideboards, never on the table. Irregular shapes led to all kinds of undesirable fraud. In 1735 the capacity of bottles and carafes was set at 93 cl (31.45 oz), and the weight at 980 grams (34.56 oz). Interest in the subject grew with the popularity of sparkling wine. Champagne bottles, at first flat or apple-shaped, gradually became pear-shaped. The glass had to be thick enough to withstand the pressure of fermentation and let the champagne foam when opened. The bottles took on their definitive form in the 1770s-1780s. Without technological strides in glassmaking and bottle shapes, the history of champagne would have been very different.

Bordeaux’s Hegemony
Meanwhile, British interest in the Bordeaux vineyards was growing. In 1723, an Irishman built a glassworks in Chartrons, Bordeaux, that made thick, dark standard-capacity bottles. Traders and merchants started bottling wine for the Paris elite, who bought less and less in barrels: Joséphine de Beauharnais's wine cellar is a striking example. The rise of molded bottles in slightly truncated cylinder form began. Their visible seams are a telltale feature, whereas blown pieces are smooth, pot-bellied and irregular. The Bordeaux bottle, or frontignane, appeared during the First Empire and rivaled Burgundy wines, always in containers with slightly-sloped shoulders and a pear-shaped figure. The narrow bodies of Bordeaux bottles had to retain suspended matter so that the wine was clear when poured, while the slender Rhenish body was suitable for wines that need no decanting. Today, shapes are virtually unchanging. After a long period of technical and commercial development, the Bordeaux bottle’s success has firmly associated identity and label.

Pierre Rosenberg the Collector
Newsfeed
See all news
Cologne Art Fair Galleries Receive 34% Discount
Preserving and Promoting Industrial Site
Ten Contemporary Artists Present Installations Around Egypt’s Great Pyramids
Plans for Mobile Museum Aboard a €32 Million Catamaran
Not to be missed
Glossary
S is for Stained Glass
In the 6th century, colored glass made an appearance in various…
Glossary
M is for Mother-of-Pearl
In the sixth century, its iridescent nuances were already enlivening…
Glossary
A is for Azulejos
Unlike what might be commonly thought, azulejos take their name…
Glossary
M for Marbling
In the 12 th century, the Japanese art of "ink floating on water"…