At Home with Fabienne Verdier

A few days before her first exhibition in London, the artist welcomes us into her den. A place of light and shadow, sheltered from the tumult of the world. A visit. 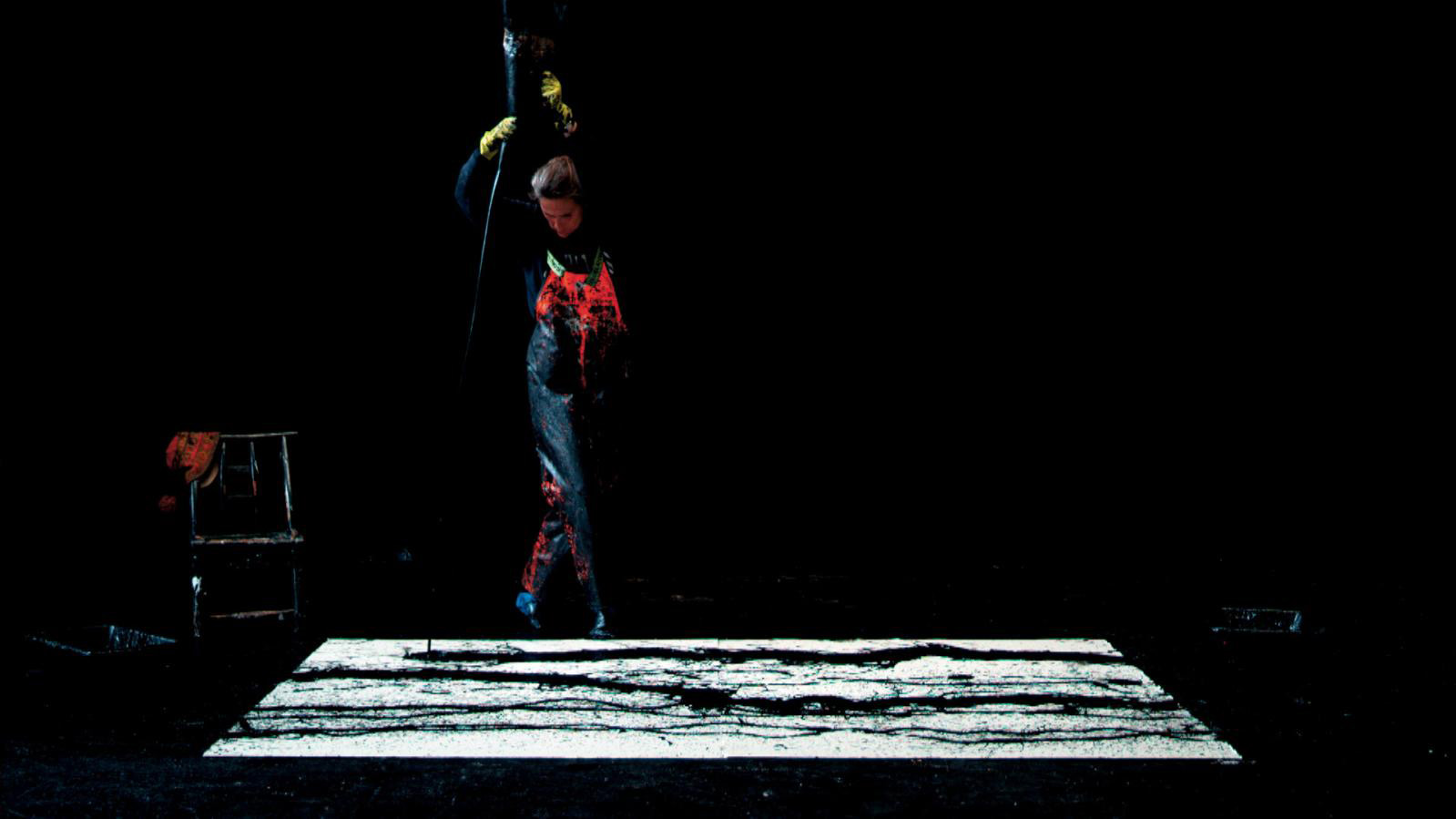 Near Chambly, in the Val-d’Oise, not far from Paris and its frenzy. There, in a small town that feels quite like the English countryside, time stands still. The trees have taken on their fall hues: they are ablaze. It is here, in this peaceful patch of nature, far from the clamor of the city, that Fabienne Verdier has chosen to live and work since her return from China.

“We settled here in 1993,” reveals her husband, Ghislain. “We built the studio with our friend, the architect Denis Valode, ten years ago now.” Its size is on par with Fabienne’s painting—monumental. We enter the large pit, plunged into darkness illuminated only by an overhead light. On the eve of her exhibition at the Waddington Custot Gallery, the place is empty. Only a few crates remain to be sent to London. Half studio, half chapel, and guarded against all distractions, this ascetic space allows the artist to escape from the world and create her vast canvases, which these days are held in the greatest collections, such as those of François Pinault or Hubert Looser.

Before entering the studio and tackling her material, Fabienne admits to spending long hours researching and reflecting, surrounded by her books. She likes the poetry of Emily Dickinson, the writings of Gilles Deleuze and objects that inspire her. In her library, which is also a workshop and open to the outdoors, I spot—meticulously arranged on the desk—branches, small shells, scholar’s rocks evoking butterflies, some moss, a Buddha…

"They make up a sort of poetic inventory of the various forms of the world," Fabienne sums up. There, facing the garden, she likes to draw, blackening her notebooks, in which she jots down her thoughts in a visual patchwork; quotations, collages and drawings play off each other and feed her inspiration.

Memories of China
Pinned to the wall is a photo taken during the years she spent in Sichuan Province, at the Institute of Fine Arts: years of material deprivations, but intense spiritual richness. Fabienne is smiling, posing next to her Chinese friends, including Zhang Xiaogang, whose paintings now fetch millions. Fabienne was twenty when she decided to leave France for China, the teaching at the Toulouse School of Fine Arts no longer satisfying her. She wanted “to work on the living, to think differently, to take a step to the side,” to “confront herself with radically different pictorial knowledge.”

Going back along the path taken by Zao Wou-ki a few decades earlier, Fabienne left for China in 1982 in search of a way to represent the world and nature that was very different from the West, inspired by conceptions and an aesthetic that are thousands of years old. In Passagère du silence (Passenger of Silence), published in 2003 by Albin Michel, she recalls her master, Huang Yuan, a painter who survived the Cultural Revolution and who for almost ten years taught her, through brushstrokes and observations, the path to a new abstraction.

She would also learn from Wu Zuoren, Li Guo Xiang and Lu Yan Shao. From her long stay in China, Fabienne draws strength and serenity. Far from the tormented figure of the artist, she knows what she is looking for and tirelessly questions her work. Several sketches pinned to the walls of her studio bear witness to this: in sophisticated writing, the painter has noted her reflections on undulating physical phenomena. We take the time to read to them: “grasp this organizing principle of the world under the influence of cosmic forces (the tide…), the rhythm of nature”. Further on: “modifications of the fluid physical state occur following a disturbance.”

These notes feed into her works in the series "Rhythms and Reflections." Ghislain remarks that “the more Fabienne studies these concepts of energy, the more she realizes that the phenomena of refraction, diffraction, dispersion, oscillation and propagation are at the heart of our perception of almost all the forms that surround us". The artist has learned to observe the world, to be interested in the infinitely small—the veins of a leaf—to the infinitely large—the vital breath that underpins everything. She perceives its quivers and its momentum. She is also on the look-out for forces which, under her paintbrush, will become forms: mountaintops, whose immensity she respects; bolts of lightning in the sky; the meanders of the branches of a tree; reflections on the surface of water.

The spirit of the form
Back in France, Fabienne developed her own tools, large brushes whose mass – once loaded with paint—forced her to come up with a system of counterweights. Her work evolved and changed scale. It was at this time that, with Denis Valode, she created her workshop/chapel, whose heart is a monumental brush suspended ten meters in the air. Playing with the depths of gravity, it allows her to paint vast canvases vertically. These paintbrushes, some more than a meter in length, look like African masks, with their long taffeta dresses. They are ritualistically arranged on the side: they are awaiting the dance of the artist…Because in the last few years, Fabienne’s painting has taken up a new rhythm.

Since seeing the great exponents of American abstraction at the Looser Foundation, in Switzerland, in 2012, and the masterpieces of the Flemish Primitives at the Groeningemuseum. in 2013, her work has evolved, and so has the way it is viewed. For a long time, she was seen only through a Chinese lens; now, her works are on show in major contemporary art museums.

Recently, her experience at the Juilliard School in New York and her work with composers and musicians have opened up new perspectives, an acoustic space of order, lines of counterpoint and of harmony. “I learned that by daring to ‘compose’ structures, made by interweaving movements and counter-movements, I could inscribe energy differentials on the canvas that were like reflections of reality,” explains the artist. Her work, while nourished by a series of confrontations with apparently different subjects, has underlying vitality throughout. “For me,” she says, “the act of painting is a way of showing a world in transformation. A transformation made of moving and developing energy.”

After "Rhythms and Reflections", inspired by her musical experience, Fabienne’s "Walking Paintings" continue her exploration of the vitality of line. She developed a new tool for the series: a cone-shaped reservoir that allows her to modulate the flow of paint according to the movements of her body. Movements that resemble a journey on the canvas and take on the appearance of a dance. The liquid ink draws poetic forms that spring from the deepest parts of the artist.

It is in this way that Fabienne Verdier means to perceive the creative principle of the world; to tame its apparent instability and help us inhabit it poetically.

Olafur Eliasson,
for his reinvention of perceptions

James Turrell,
who metamorphoses the experience of space and light

Walter De Maria,
and his Lightning Field, and the way he plays with forces at work

Agnes Martin and Robert Ryman,
for the variations and subtle vibrations in the imperceptible ricochets of light

Jean Tinguely,
for his humor and boundless imagination

Giorgio Morandi,
for his simplicity and humility
WORTH SEEING
«Rhythms and Reflections», Waddington Custot Gallery, London.
Until February 2017.
waddingtoncustot.com