In this village in the department of the Var, private foundations and estates full of sculptures attract the cream of the art collecting crop each summer. It’s a different way of doing business. 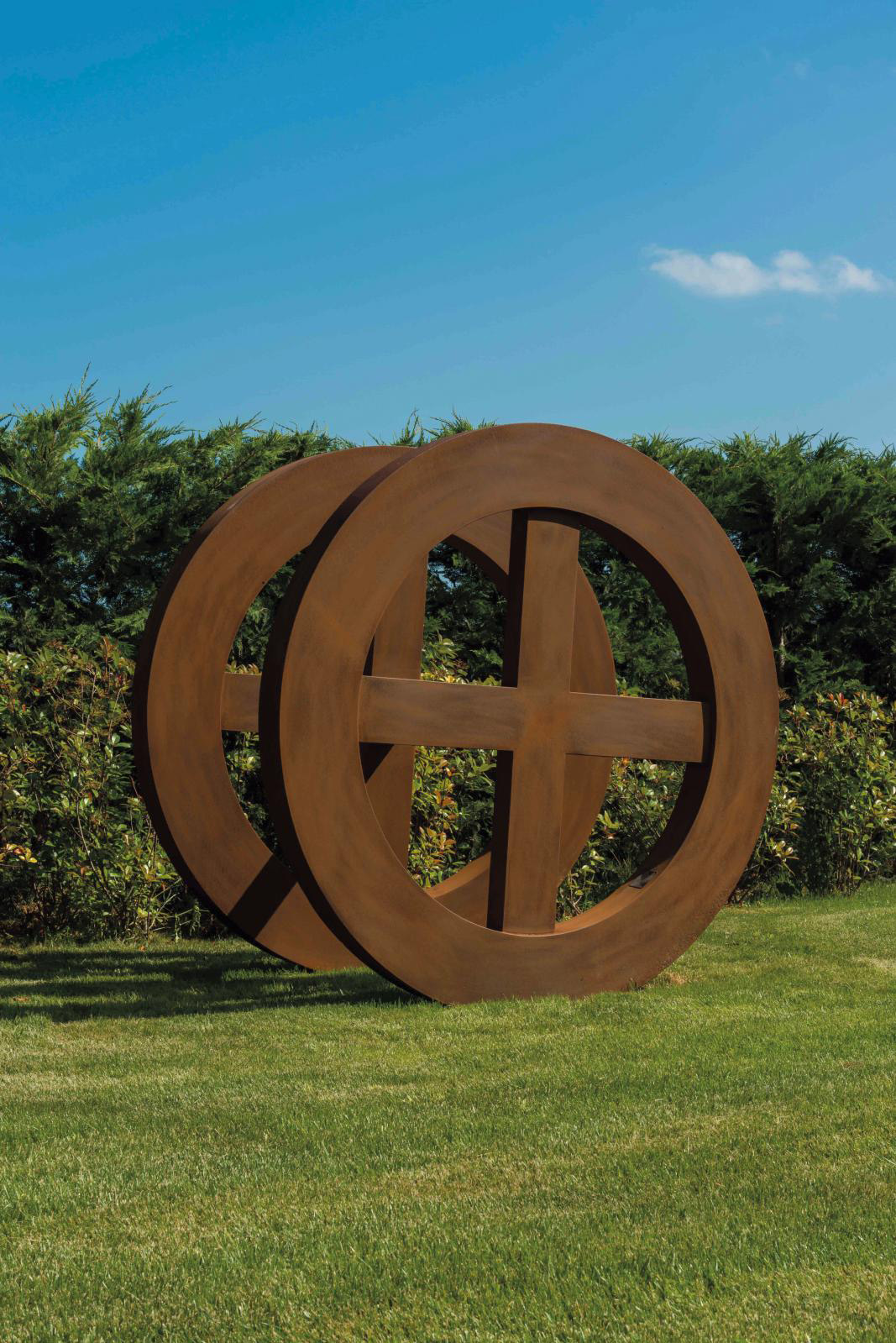 With the ongoing nature of the health crisis, the Var’s dream of a handful of influential gallerists and artists seems timelier than ever. Here you are not faced with tightly packed crowds or a worrying proximity to others, but rather with enormous verdant estates where the summer heat is more merciful and where you can find sculpture parks to peruse in the fresh air. Places that cultivate a nice inner circle of neighbors, regulars and figures from the art world, but which open up, upon appointment, to enthusiasts who are just as keen to discover both the bucolic haven for the great names of the art market and the masterpieces that are hidden there. All these art-world figures, buying up plots and turning them one by one into open-air museums, have thoroughly transformed Le Muy, which has become both a popular and privileged artistic spot. It was in the 1980s that Enrico Navarra, a dealer of Basquiat and Haring, was the first to set up shop. Later on, it was the turn of the sculptor Bernar Venet, who created a haven to magnify his monumental creations. Much later still, in 2015, the Parisian dealer in contemporary art Jean-Gabriel Mitterrand, along with his son Edward, built an undulating and wild sculpture park. The latest arrival: Mitterrand’s fellow design enthusiast and Jean Prouvé specialist, Patrick Seguin. On the 40 hectares (98.8  acres) above Navarra’s property, Seguin has trusted the construction of his house to Jean Nouvel.

Some Idyllic Assets
But why Le Muy? “If you take a compass, everything stands within an 80km radius”, sums up Diane, wife of the artist Bernar Venet. Just like in Los Angeles, the criterion is “everything is one hour by car” says a dealer, and even less for those who have a helicopter to hand. That includes various Michelin-star restaurants, but also the Nice airport. As stated in the summer program of the new network “Plein sud”, dedicated to visual art, private and public institutions are abundant. Worth a mention, among others, are the winegrowing and artistic estate of Peyrassol, in Flassans-sur-Issole, interior designer Pierre Yovanovitch’s castle La Coste in Fabrègues, near Aups, with its park which was redesigned by the landscaping star Louis Benech, the recently opened Fondation Carmignac on the island of Porquerolles, opposite Hyères, which each summer hosts the Design Parade Hyères Festival, or the revered Fondation Maeght. Add a significant advantage into the mix: Saint-Tropez. The idyllic seaside resort is but a stone’s throw away and with it come very high-level collectors, such as Lindsey Owen-Jones, the Schwarzmans, François Pinault—those who moor their yacht there and many others with less well-known names but plenty in their pockets. Brad Pitt, who loves the region, wishes to create a sculpture park there (Bernar Venet’s work is included in his collection). The Belgian gallerist Guy Pieters understood the interest of the small town well and opened a foundation there, while the dealer in traditional non-Western art Lucas Ratton has a commercial space just a short distance away where he mixes folk art, design, collectibles… “Fifteen years ago the region was, apart from the Fondation Maeght, a no man’s land” points out Romain Brun from Galerie Enrico Navarra. “Having so many places close to one another makes it easier to encourage people to travel here.” It’s a cluster of institutions that is likely to attract collectors from France and internationally—such as from America and Asia in normal times—who settle on the coast or inland for weeks at a time, where they spend time visiting these private foundations in Le Muy. “Being here allows us to cover the entire coast; from Saint-Tropez to Monaco” continues Romain Brun. “There is no commercial activity in the gallery in summer, so Le Muy offers a place for interaction that goes beyond a commercial setting. The network side is more important than the customer side.” This whole art “ecosystem” is made manifest in the lunches and dinners organized around one another’s swimming pools. Time slows down. “A gallery, a fair, these are formal relationships. Summertime, holidays, they’re informal. This is an occasion where we can give out books about our artists which the collectors will really have time to read.” Another great advantage for the professionals in the market: networking and consolidation. “It’s important to really understand globalization, how the tastes of the Chinese are going to develop, for example.” There’s nothing more attractive to top dealers! To the multimillionaires and billionaires who visit them, the estates and foundations in Le Muy show more than just a window into their activities, they offer a way of life close to their own, combining living space in vast contemporary residences and inspiring sculpture parks that show the works in situ.

It Starts with Sharing
“Jean-Gabriel Mitterrand created his gallery in 1988 by championing sculptors, including Niki de Saint Phalle, the Lalannes, Cárdenas, Marta Pan, who often created monumental projects,” explains Sébastien Carvalho, of the Galerie Mitterrand. “It has become a passion for him to develop art outdoors. He ended up finding some land here and buying it with his family. The gallery has stepped in to transform it into a place dedicated to monumental sculpture. We are very keen to develop the activities on the estate, especially with commissioning young artists for the park. Plus we want to reinvent possibilities for cooperation. A foundation that has had a piece in reserve for 10 years and is not able to display it can entrust it to us for the long term. It’s a very strong connection point for other collections. There’s a will to unite, to work with everybody including with institutions like the Espace de l’Art Concret for their current event on Sobrino. On a commercial level it is still an experimental model. The works on display in Le Muy can be purchased but it’s not the same approach as in a gallery. We come here primarily to share a passion, to spend some time, to discuss. And the collectors who discover us in Le Muy and didn’t know us before might be tempted to come to the gallery in Paris afterward.” It’s a different case for the Bernar Venet Foundation. It started as a place to live and an inspiration for the artist, seduced by the potential of an old factory, who works in the United States but would like to spend more time in Le Muy. Bordered by a refreshing river, it is an exceptional setting not only for Venet’s impressive body of works in Corten steel—including Effondrement (Meltdown) exhibited in 2018 in the gardens of the Château of Versailles—but also for the works by his peers, such as the “Frank Stella Chapel” and the only Elliptic Ecliptic by James Turrell which can be found in France. Add to that a new glass-walled gallery designed for work of the American conceptualist artist Laurence Weiner, with minimalist and conceptual art being the common theme of the Venet Foundation. Collectors, potentially the same ones in each place, are free to draw inspiration from these havens, far away from the busy, beating heart of the art world.

Marcel Sztejnberg: A Collection that Reads like an Encyclopedia of French Silverwork
Newsfeed
See all news
Paris: Christmas at the Carré Rive Gauche, Starts Today!
SAH Opposes Proposed Alterations to Library of Congress
Art Basel Places Its Bet on Asia and Digital
London: Temporary Export Ban Placed on Rare French Ivory
Not to be missed
Analyses