A well-known advisor in the microcosm of contemporary art, Laurence Dreyfus celebrates the 20th edition of this key October event with a wealth of works by Olafur Eliasson, Saraceno, Claire Tabouret and Alice Grenier-Nebout at the Maison Pierre Cardin in Paris. 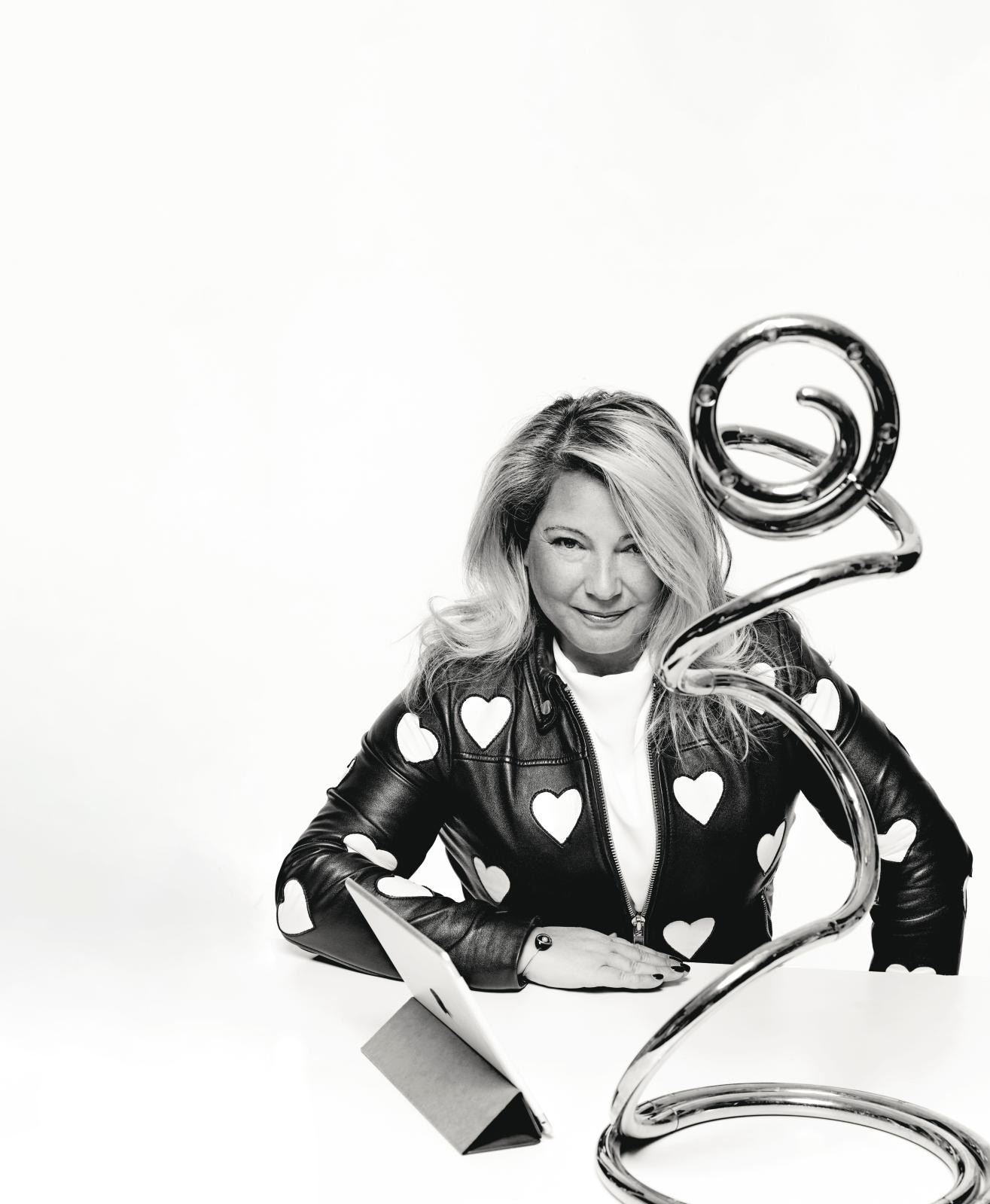 How did you get started in art?
It all began with a love affair with a man who took me to museums, including that absolute must, the Centre Pompidou. I was also lucky enough to go to the US with my father, where I spent my time at MoMA and The Met, which were my havens. Then, I studied art history at the University of Paris I, which I combined with six months at the Sotheby's Institute of Art in London.

What happened next?
I was soon lucky enough to make contact with various artists. I knew Emmanuel Perrotin, then just starting out in his apartment, who introduced me to Damien Hirst. In London, I met Jay Joplin, founder of the White Cube gallery, and saw Damien Hirst's first exhibition at the ICA. Then in Paris, I met Fabrice Hyber, Daniel Buren, Chen Zhen, Chong Hak, Ange Leccia and several others. We became a band of friends! After that, I got a foothold in various galleries, particularly after my return from London as an intern at the Durand-Dessert Gallery, which I assisted during fairs. I saw Gerhard Richter’s second exhibition, with ten paintings, in Rue de Lappe. Only real enthusiasts wanted them! I also worked with Farideh Cadot, who represented Markus Raetz, among others. While I was working with Hervé Mikaeloff (a friend from our student days) in a space rented to the Yvon Lambert Gallery in Rue du Grenier-Saint-Lazare, Gabrielle Salomon asked me to join her. I ended up being the director of the Gillespie-Laage-Salomon Gallery. In the 1990s, it was the antechamber to the Michael Werner Gallery in Cologne. We presented exhibitions of German neo-expressionists like Baselitz, Immendorff and Penck. Then came the land art artists, and Annette Messager: this was her first gallery. After that, I met the collector Jean Chatelus, who bequeathed his collection to the Antoine de Galbert Foundation. He suggested I staged some exhibitions in a space he owned. That's how I set up a show for Koo Jeong-A, Hans-Ulrich Obrist's wife, and then for Matthieu Laurette. Gilles Fuchs also supported us. I managed to prepare the ground between France, London and Berlin, and met leading collectors like Claude Berri. Little by little, I became familiar with the DNA of French collectors. In 2001, when I left the gallery, I was even the co-curator of an edition of the Lyon Biennale!

Antoine de Galbert indirectly helped you get started...
Yes; I met him when he came from Grenoble and wanted to create his foundation, the Maison Rouge, in Paris. I offered him a work by Kusama, and the commission for that enabled me to start my own company. He was a liberated collector, intelligent, and different. I'm lucky to have met people like him, with a real eye—not in the mainstream.

You started out on your own two decades ago, at a time when contemporary art was really taking off.
I started by buying a Murakami for $30,000 in New York for an Iranian, and, back in Paris, a Cattelan for several tens of thousands of euros. I spotted artists who became stars in the market very early on. Then Philippe Ségalot became head of contemporary art at Christie's New York and boosted this market. François Pinault had just bought Christie's [in 1998—Ed.] and needed some outstanding lots in this rising specialty.

Want to receive news and updates about auctions?
Sign up to our newsletter
What led to the concept of “Chambres à part”, now celebrating its 20th anniversary?
I was keen to put works in a more domestic context, very different from the cold stands of fairs, during October in Paris, which is a truly vibrant period. “Chambres à part”, which was later copied, was also intended as a nod to the dealers at home. It provides collectors with a relaxing moment when they can really appreciate works. I then became an established stopover in the VIP circuit set up by Jennifer Flay around the FIAC. Galleries entrusted me with works, even those exhibiting at the fair, and, discreetly, collectors and artists. All of this provided an overview of the market. That was how I sold a fine James Lee Byars installation to the Pinault collection in 2010, the year the Musée d'Art Moderne de la Ville de Paris was exhibiting the artist: a work intended at the time for an exhibition at the Punta della Dogana in Venice.

This year, you are moving into the iconic Pierre Cardin store opposite the Elysée.
Pierre Cardin's big blue store and its unique architecture made me want to move away from square geometric shapes towards a kind of creative flexibility. We find this in a section dedicated to NFTs, in Pablo Reinoso's sculptures and in Robert Longo's wave movement and nuclear mushroom explosions. The whole thing is also a synthesis of what I saw in the previous twelve months. Not everything is for sale, like the Murakami. We also have a beautiful piece by Bernar Venet.

This edition is also an opportunity to encapsulate 20 years of “Chambres à part” through pieces by Francis Alÿs, Tomás Saraceno, Olafur Eliasson and Claire Tabouret.
It’s a way of highlighting artists who have fulfilled their promise! In 2010 I showed a piece by Tomás Saraceno, which a collector placed in his mansion in Saint-Tropez. I presented his creations every year, long before he entered the same gallery as Eliasson! I maintain a kind of loyalty with them. When I met Claire Tabouret, at a time when she was not a market leader, I spent six hours in her studio, I found her captivating and I wanted to show her. So I presented her works and pieces by Francis Alÿs (who is representing Belgium at the Venice Biennale this year), Eva Jospin before her time, Murakami and others.

How do you see your role as an advisor?
You have to keep one foot in the reality of the market, but also be aware of the diversity of art history, while focusing on artists you know. As I’m not a fan of conceptual art, I was lucky to come on the scene just when there was a shift toward the abstract. Unlike some consultants, I am not attached to one or two dealers. I try to inform collectors about the state of the market at a given moment for an artist. What matters today is having the right pieces by an artist, not just their name. With the tremendous acceleration of contemporary art, people buy a lot with their ears. You have to be able to say no to a collector!

Among the collectors, you work with are the Freymonds, who recently opened a new place near Florence with an Olafur Eliasson exhibition.
Caroline and Eric Freymond opened the Palazzo Al Bosco in Tuscany this fall. In parallel with the exhibition at Palazzo Strozzi in Florence, the inaugural exhibition, presented until the end of June by appointment, brings together works by Olafur Eliasson from their very fine collection, including twelve on glass, inspired by the light and colors of his travels.

How do you see the art market’s recovery in a difficult global context?
Recessions often have a delayed impact on the art world. During crises, collectors turn to safe investments. Reassessments are to be expected, not to mention a dearth of top-quality works, especially in painting. It is the role of advisors to provide access to important pieces, in the face of increasingly high and globalized demand.