No less than 181 lots are listed in the blue-ribbon sale catalog of the collection of Anne-Aymone and Valéry Giscard d'Estaing, president of France from 1974 to 1981. It is a portrait of a presidential couple’s artistic choices. 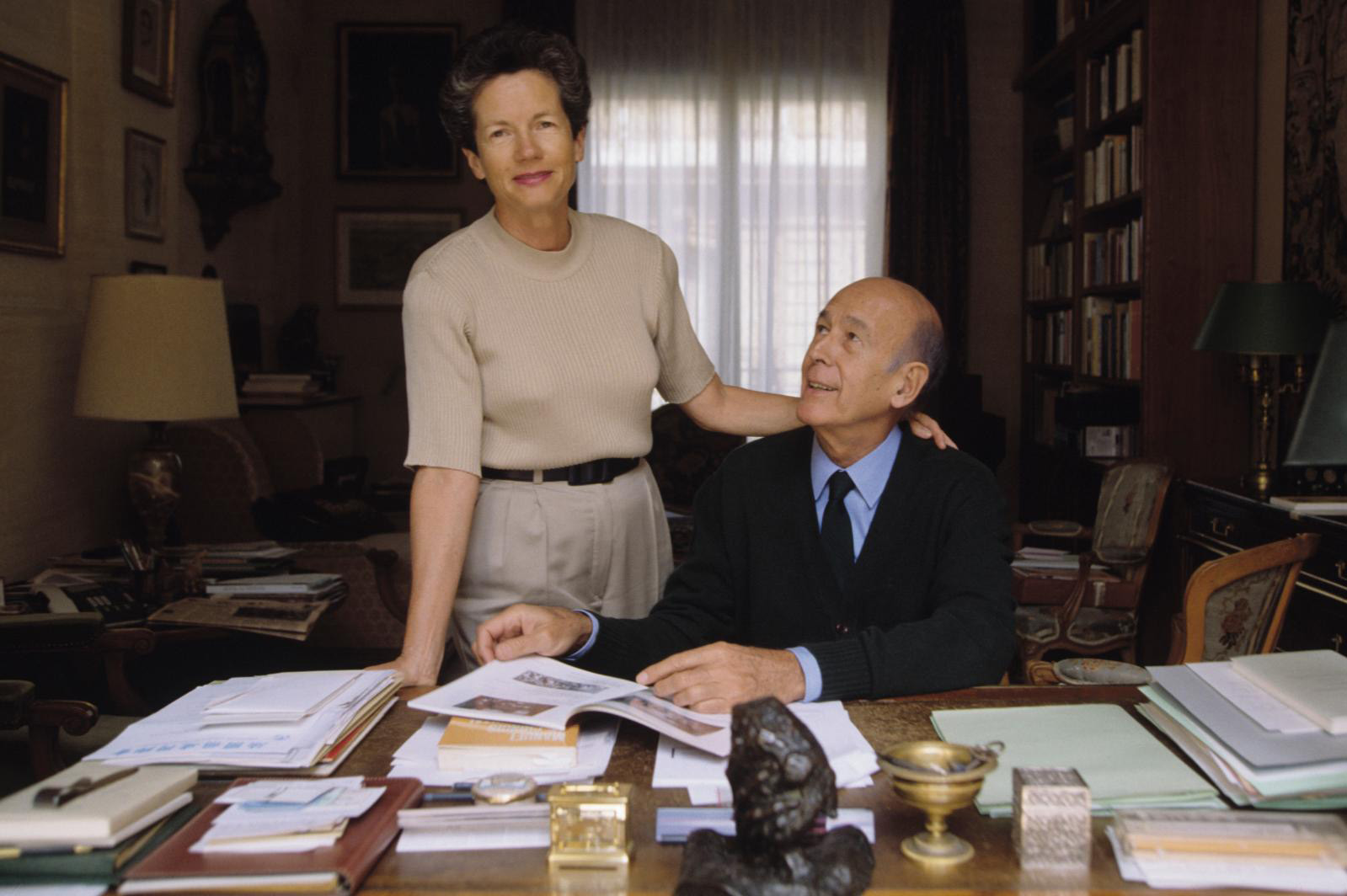 Mrs. Giscard d’Estaing, why did you decide to sell part of your collection?
After my husband died, the house where we lived on rue Bénouville in the 16th arrondissement of Paris was too big for me to live there alone. My children picked the furniture and paintings they wanted to keep, and I took what could fit into my new apartment. I’m attached to things, but there comes a time when reality catches up with you and you have to make choices. For example, my imposing Garnier desk and cartonnier would look out of place in a modern home. I like them very much and I’ve had them all my life. They were in the Château de Fresne, where I grew up in Touraine. My husband and I lived there for ten years after getting married. Our children were brought up there. Family lore has it that my great-grandfather bought the desk, which is said to have belonged to the Duke de La Vallière, during the siege of Paris in the Franco-Prussian War.

Your collection is made up of family heirlooms and items you’ve purchased. The sale catalog shows that you’ve bought back furniture and objects that belonged to your family.
My husband was very attached to family heirlooms, and while we might make the decision to buy them together, he sometimes did it alone. He didn’t always ask my advice—sometimes to my surprise! An example is the Rochette Louis XV chest of drawers with lacquer panels that was purchased at Drouot in 1993. It belonged to a princess of Faucigny-Lucinge in the early 20th century, and my mother inherited it from my grandmother Brantes, née Schneider. Valéry was passionate about ceramics. He added to the Sèvres pieces that came from my family, especially from my grandmother Schneider. For example, he bought two plates from Madame du Barry’s "small vases and garlands" service.

Did your husband seek advice for his ceramic purchases?
He carefully followed auctions. He was very close to Maurice Aicardi, a fine connoisseur and collector and his main advisor for many years. Valéry didn’t stop at Sèvres porcelain: He loved Meissen porcelain figures such as the four statuettes acquired at Drouot in 1991 that belonged to Gustave de Rothschild. He also had a large collection of Clermont-Ferrand faience, which was sold with the contents of the Varvasse Château that we owned in Chanonat in the Puy-de-Dôme. My husband was proud of his Auvergne roots. He acquired an original, extraordinary Empire clock that was actually the model of a monument to Louis Charles Antoine Desaix, a general who fought in the revolutionary wars, and who was from Auvergne. Valéry was a general counselor in the canton where Desaix came from, so he felt an affinity with him.

He also seemed to have affinities for the Louis XV period.
He loved art from that era. I remember the major exhibition in 1974 dedicated to the period, the height of French art. The other day, the curator of Versailles told me that, in the current show celebrating Louis XV’s reign, he very often refers to the one my husband opened, who had just been elected president. Valéry was as interested in the king as a politician as he was in the king as an art lover and patron. It’s a bit like Adélaïde Labille-Guiard’s Portrait of Choiseul. He admired the great statesman as much as he did the art lover and collector.

The sale also features a fine selection of bronzes, including Rodin’s Portrait of Gustav Mahler. Was that your husband’s choice?
Valéry was very fond of that bronze, which he bought because he was interested in both the composer and the sculptor. He loved classical music. He studied piano and enjoyed playing when the opportunity arose. Mahler was one of his favorite composers and he often looked at the bust. But he liked sculpture in general, especially in bronze, from the Renaissance to Rodin. The collection includes some works that I liked very much, but I only kept one, which came from my family, as well as the portraits a contemporary artist made of us in the 1970s.

Was he a bibliophile?
My husband bought books, but he wasn’t a bibliophile in the strict sense of the term. Our home in Auvergne contained many books because my father-in-law loved them. Our house in Authon, Touraine has a beautiful library, but the one in Paris didn’t.

What are your favorite pieces in the collection?
My tastes are humbler. I collected many coconut sculptures over the years, some of which I’ve kept. It all started with a carved boxwood box that my grandfather, a general, received as a retirement present. It had military motifs and captivated me as a child, so I became interested in wooden carvings and discovered coconuts. I found them quite fascinating because they’re so varied. I like very diverse, often unexpected subjects. For example, some of them feature musical instruments, while others show hunting scenes or military subjects. A number of artists drew inspiration from Napoleon. I also acquired other small wooden objects, especially if they were made of boxwood. But I also bought things related to my family. I remember bidding for a portrait while on a hunt in Spain. I had to run up a hill to get a signal to bid by phone. And I won the painting! I’m not sure I should have gone to such lengths for the portrait by Joseph Boze of my ancestor the Duke of Berry as a child, which I acquired in 1978 at a Paris sale of Bourbon memorabilia from Schloss Frohsdorf. It’s nice but not very charming.

What do you remember about the Élysée Palace?
The Élysée is perfect for hosting receptions but not for housing a family with four children. Being the seat of the executive branch of government, it’s not really a cozy home. So we continued living on rue Bénouville. But Valéry and I wanted to make the palace a showcase for French decorative arts, and he often communicated with the Mobilier National to find objects he liked. He was especially attracted to the 18th century. Some of the rooms the Pompidou's decorated had aged badly, so they were redone in a more classic style. I had an office there where I went regularly. It was in that office where I worked to create the Fondation pour l’Enfance.

How did the foundation get started?
As First Lady, I received dozens of letters every day, usually from people in desperate situations. After leaving no stone unturned, people often saw me as the last resort. I set up a commission to help them as much as possible. We realized that many children are victims of all kinds of violence, and we had very few solutions for them. I used the royalties from my husband’s book Démocratie française, which sold extremely well, to create a foundation for the protection of abused children. Between 1990 and 2010, we hosted fundraising galas at Versailles. They were very successful because I invited celebrities and crowned heads, which made them glittering occasions. I headed the Fondation pour l’Enfance for 35 years before passing it to another foundation. Sadly, child abuse is still with us.

You’re selling your collection at Drouot. While the auction house was being rebuilt in the second half of the 1970s, sales took place in the Orsay train station, which your husband had set aside to become the Musée d'Orsay.
Valéry played a key role in creating the Musée d'Orsay when he saved the station, which President Pompidou had planned to tear down. He actively participated in the selection of works for the exhibits and threw all his weight behind getting the Louvre to turn over its post-1848 collections. My family and I have just one regret: although the institution has been called the "Musée d'Orsay et de l'Orangerie-Valéry Giscard d'Estaing" since 2021, we’d like it to feature my husband's name more prominently.

Is there anything else you’d like to say?
I just hope that the new owners of the furniture, paintings and objects will love them as much as we do.

Spectacular Rococo Beds
Not to be missed
Interviews