The contrasts of blues and black and the play of material in this 1975 work by Pierre Soulages were a key step on his path. 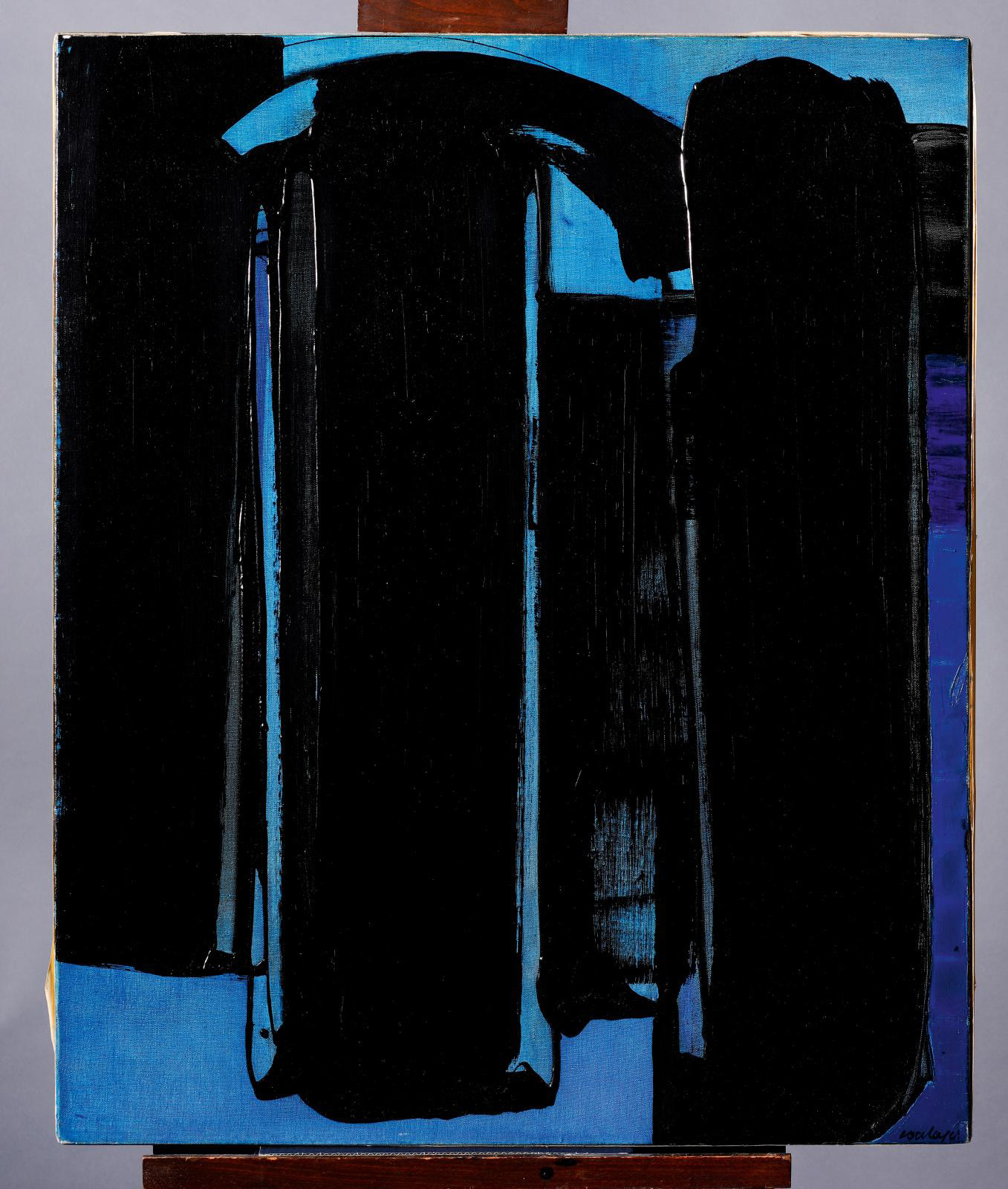 A painting’s first-time appearance in the market is always an event. This work by Pierre Soulages is no exception. Very few people have seen it: it has never left the office where its owner hung it. A collector in the Montpellier area (Southern France) and a patron of many artists, she brought together an eclectic group according to her aesthetic tastes of the moment. She bought Peinture 16 avril 1975 (Painting April 16, 1975) from a Montpellier gallery a year or two after its execution. In an outstanding state of conservation, the work looks just as it did on the day it left the studio. The edges are covered with beige canvas—Soulages wanted to display it unframed—and the colors are still fresh, unmarked by any later intervention. Pauline Helou de la Grandière, the painting's restorer and a Soulages specialist, has identified them. Phthalocyanine blue was thinly applied to a white primer, allowing it to show through, and unevenly covered by bands of ivory black, whose opaqueness was scraped away in a continuous movement with brushes about fifteen centimeters (5.9 inches) wide, producing striations in the denser material. Thicker and stronger than the first azure hue, dark ultramarine blue applied in short horizontal strokes with a brush three times narrower borders the right side. These steps highlight the depth of the black through contrasting shades, textures and faded blue tones, making them look brighter and more intense.

Black was present in the artist’s works as far back as the 1940s but completely overran them starting in the 1970s, marking a turning point in his career. From walnut stains to the outrenoirs (Beyond Black) created from 1979 on, Soulages ceaselessly experimented with gouaches on paper as well as printmaking, which he focused on from 1972 to 1974. In this captivating work, light eclipses the sign. Four years later, Soulages did away with form altogether in dazzling darkness. In a way, he went back to his roots: as a child, he depicted snow by drawing large black lines on paper, and he has always been fascinated by the choice of black in rupestrian paintings shrouded in the darkness of caves. “The earliest paintings were black,” he said. Presenting the work in Montpellier is a nod to another milestone in his life: as soon as he moved there in 1941 to start his job as a drawing teacher, he visited the musée Fabre, “the first museum where I really started to look at paintings closely,” he said, impressed by the colors of Courbet, Zurbarán and Veronese. Since 2007, the Fabre has devoted two rooms to his works.

Soulages and Senghor: Linked Through Poetry
Newsfeed
See all news
Rubell Museum to Expand with Second Collection in Washington D.C.
Ancient Ceremonial Artifacts Found at Egypt’s Temple of the Pharaohs
The Villa Albertine Opens in New York
Colnaghi Gallery Prolongs Exhibition Exploring Connections between Spanish Art and the New World
Not to be missed
Spotlight
The Virtuosity of Flemish Manuscript Illuminators Radiates…
The art of the miniature reached such heights in 15 th -century…
Spotlight
Raden Saleh: A Dialogue Between East and West
Two cultures meet in the work of Raden Saleh, the Javanese painter…
Spotlight
A Table Commemorating the Liberation of France by the…
Mystery shrouds this unique, previously unknown table made in 1947…
Spotlight
A Treasure of Gold Coins Found in Brittany
In 2019, a couple and three stonemasons found a trove of coins dating…