Saint James the Great is a sensual interlude in the art of Champaigne (1602-1674), a portraitist who found favor at court and became a painter of the New Testament after 1640. 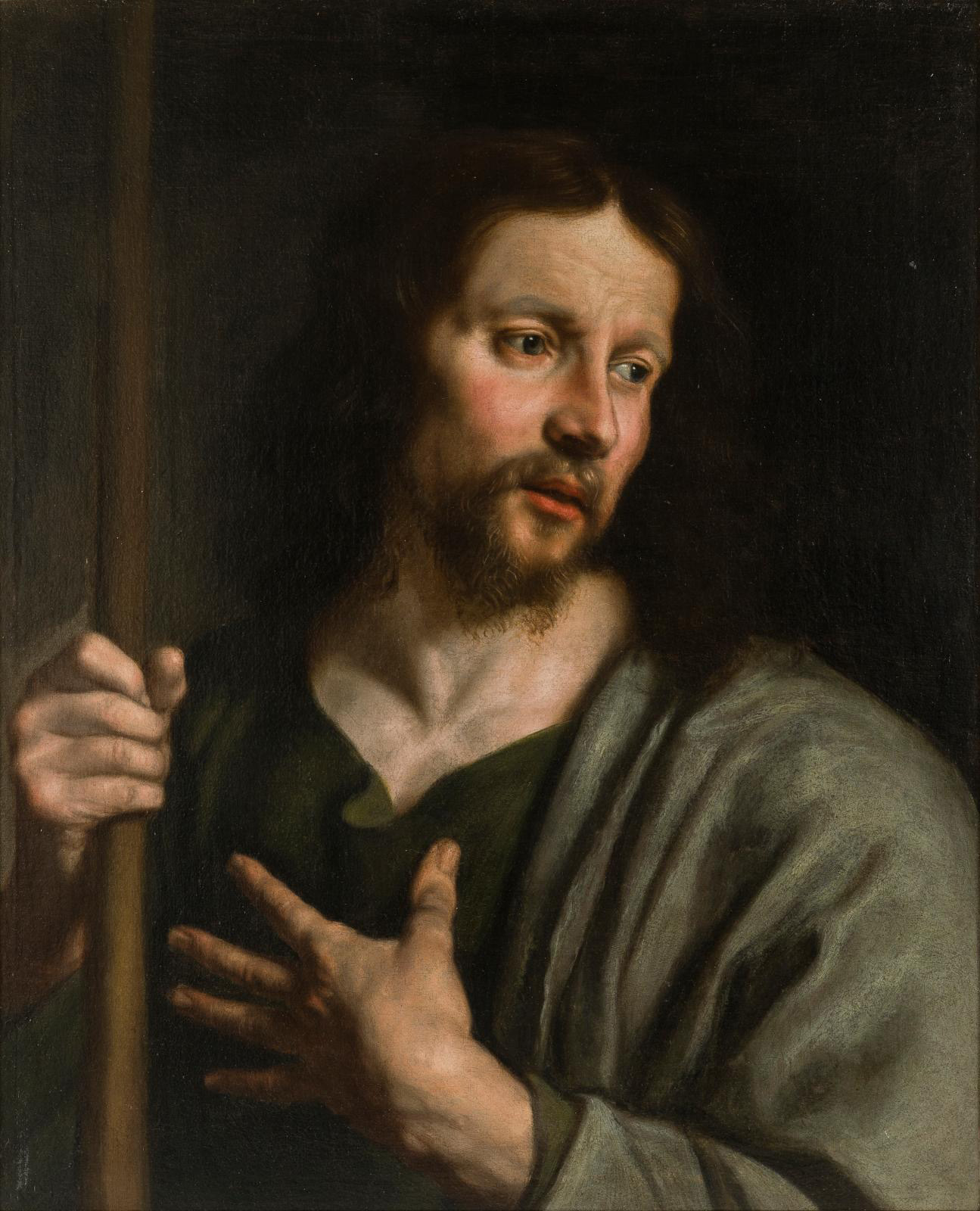 With his imploring gaze, flushed cheeks, half-opened mouth and hand on his chest, Saint James the Great is far from the stoicism or even the austerity typical of Philippe de Champaigne’s figures. If the tunic and complexion respond to each other in a restrained palette of gray and brown, the strong pigmentation of the lips and soft light cradling his face makes an exquisite composition. This Saint James even exudes a surprising sensuality. Although depicted as a pilgrim, holding a staff and with his cape across his shoulders, he appears to us bareheaded. A genius of portraiture, honored by Marie de Médicis, who made him her official painter in 1628, Champaigne demonstrates here the full extent of his ability to capture the complexity of human nature and psychology. Man takes precedence over the saint, almost anonymizing the first of the apostles, mortal among mortals, with suffering and emotion that can only be earthly. We recognize the stripping back of Champaigne’s tempered baroque in his handling of the brother of John. Known as the portraitist of the kings of France and the country’s leading figures—Cardinal Richelieu among them—after the death of his son, wife and one of his daughters, the artist turned to piety and spirituality, putting himself at the service of parishes and religious orders. Unlike his contemporary Nicolas Poussin, he primarily painted scenes from the New Testament, representations of Christ and the Virgin, as well as saints. The provenance of this work is transparent: the oil painting appears in the inventory taken after the artist’s death on August 17, 1674, under number 48. It can be traced to Brussels where it was in private collections until the late nineteenth century, when it came to Paris, notably in the huge collection of one of the most famous antiquarians and cabinetmakers of the time, Alfred Beurdeley. The painting has not left the French capital for more than a hundred years. It was also one of the few compositions taken up by engravers after the artist’s death. While they massively contributed to the dissemination of his work during his lifetime, in particular by favoring his illustrations, after his death, only Nicolas Bazin (circa 1636-1710) engraved five new pieces, including this Saint James the Great. Charles Le Brun, his competitor at the height of his fame, was preferred by engravers, but Champaigne only had to wait until the nineteenth century to regain favor with those adept with the burin.

Print the article
Newsfeed
See all news
The Louvre's Acquisitions Totaled Only €10.21M in 2021
“Complete and Intact” Roman Temple Found in the Netherlands
A First Work by Swiss Painter Ernest Biéler Joins the Orsay Museum
Ngonnso’ Restitution to Cameroon Gets the Green Light in Germany
Not to be missed
Pre-sale