The 17th-century Flemish cabinet from the Jean Bouvier Collection is a veritable theater of surprises that has yet to give up all its secrets. 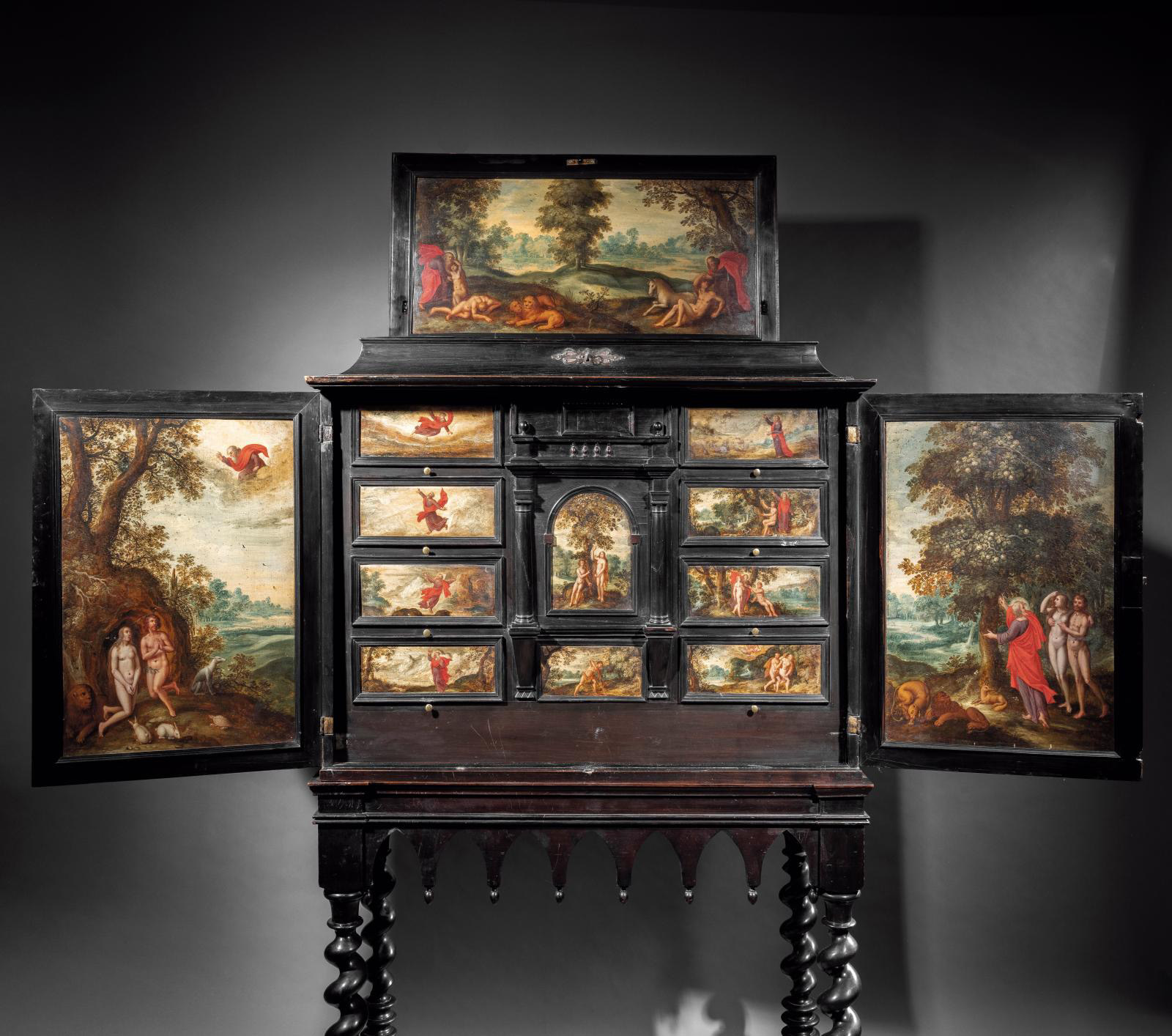 Picture Antwerp in the mid-17th century. The Flemish city and major port, which did a thriving business in the spice trade, was at the height of its wealth. The population rose from 10,000 to nearly 100,000 in the late 16th century, an outstanding number for Europe. Echoing this growth, artists’ studios multiplied and commissions poured in. Many painters Rubens' entourage prospered. Painting scenes for highly sought-after cabinets was a steady, lucrative business. Often, like for this cabinet, which features scenes from Genesis and Adam and Eve in the Garden of Eden, they are unsigned, but stylistic details allow attributions to be made.

Wood from the Tropics
The first ebony cabinets were made in 16th-century Italy. They sparked diplomatic quarrels, notably when Henry IV decided to stop very costly imports and have them made in his own kingdom. Later, they became emblematic of furniture from the Northern countries, especially Flanders, where cabinetmakers had the smart idea of applying ebony veneer not just because it was exotic, and therefore rare and expensive, but hard to work with. Rare species from faraway places began arriving in Europe during the "Age of Discovery." The first on the market were Brazilwood (or Pernambuco), cade, cypress, boxwood and ebony. These rare woods came from Asia, America and tropical islands. Ebony, which the Dutch and Portuguese brought back from Madagascar and Mauritius, was the most precious and delicate one. In France, a new guild was named after it: ébénistes. Other materials—tortoiseshell, ivory, alabaster, enamel, lapis-lazuli, porphyry, etc.—and trompe l’œil paintings were added, creating theatrical pieces of furniture full of surprises as they are opened. Antoine Furetière (1619-1688) gave the first definition in his Dictionnaire universel, published two years after his death: “Cabinet. Type of sideboard with several doors and drawers to lock up precious things, or to serve as an ornament in a room or gallery.” They became so fashionable that cheaper models were made of blackened fruitwood imitating ebony.

Theater of the Creation
Invented during the great voyages of discovery, it is only fitting that cabinets were designed for their owners to store their papers, jewelry and indispensable little items while traveling by coach from one place to another. The legs were created later as a more aesthetic alternative to the trestles upon which they were placed. However, cabinets served not only a useful but also a symbolic purpose: they proclaimed their owner’s wealth from province to province. Designed to be unashamedly ostentatious, the idea was to show the better to hide, a perfectly mastered art, as in the one presented here, which was in the collection of painter Jean Bouvier (1924-2022). It opens with two leaves on a false façade constituting a flap with a concealed lock that, once opened, reveals nine drawers and an architectural central part with a curved panel featuring silk thread and sequin embroidery depicting birds and animals under arcatures or in a frame of floral scrolls, a tribute to his mother Colette Bouvier (1894-1985), an embroiderer.

The paintings, depicting the Biblical story of Genesis, are attributed to Isaac van Oosten. Little is known about his life except that he was the son of an art dealer and became a master of the Saint Luke’s guild in 1652. As a typical Antwerp artist, Van Oosten was impervious to foreign influences. He painted quiet landscapes in the tradition of Jan Bruegel the Elder and panels for cabinets, a highly profitable business at the time. The scenes from Genesis featuring Adam Eve indicate that this cabinet is from the Catholic Southern Low Countries, not the militantly Calvinist North, which scorned religious imagery.

The sale will take place under the auspices of the Egyptian goddess Bastet in the form of a seated cat. Who could dream of better protection? Cast in Egypt during the Saite period, the statue was acquired by Jacques and Thérèse Bouvier, the parents of the painter Jean (1924-2022), whose collection is being dispersed. It includes autographed manuscripts, objects from the Middle Ages, Renaissance, 17th century and Asian art. Some of his own works will also be up for sale. A look at them immediately brings to mind the silence emanating from the still-life paintings of Giorgio Morandi, another artist who sought to unlock the hidden meaning of things.