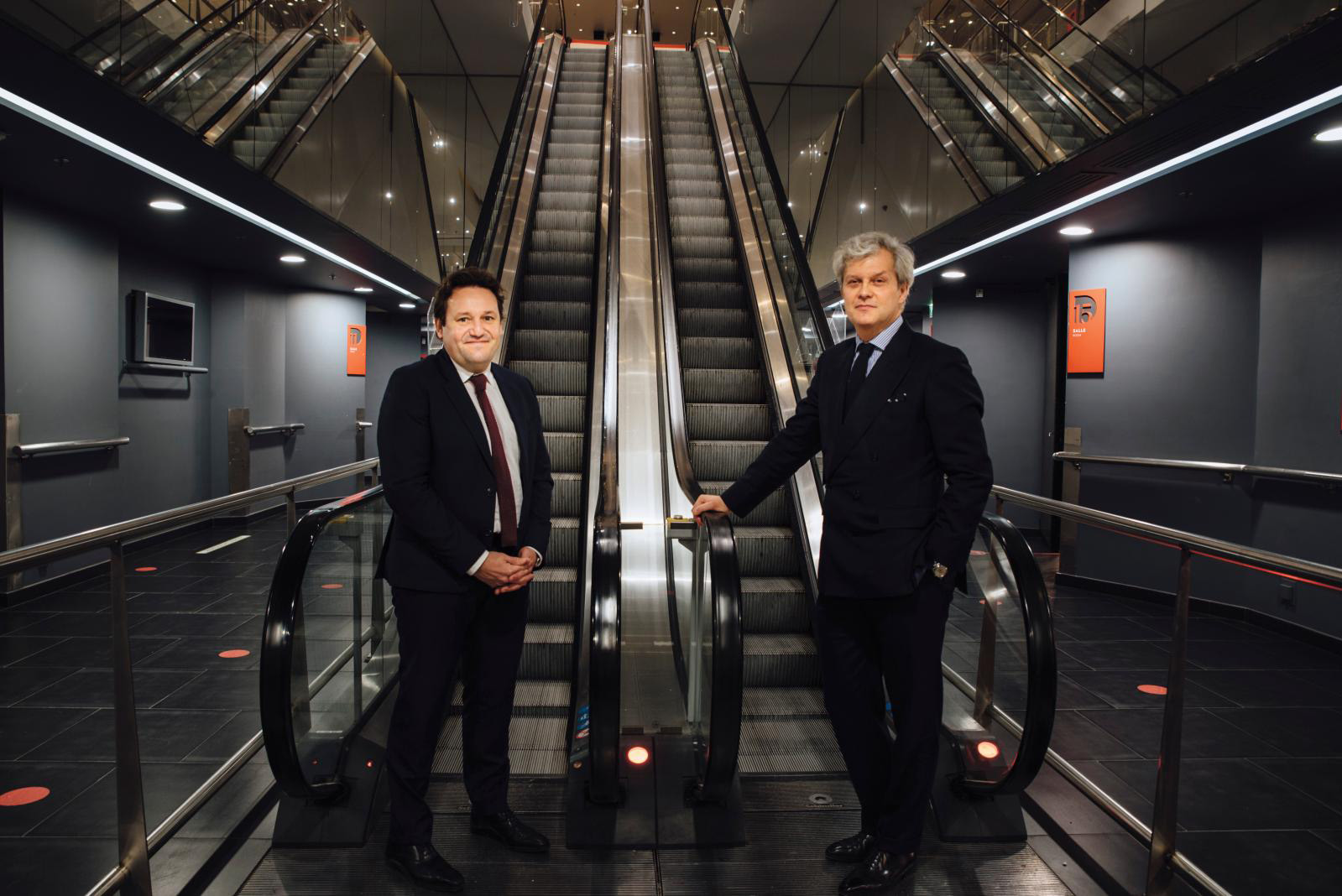 Why was the directorship position at Drouot Enchère created?
Alexandre Giquello: The idea is to simplify a system that had become hard to fathom, with levels of intervention that were too disparate. In short, the new position came about through merger of the former Executive Board and the former Supervisory Board. It’s important to have someone who’s an auctioneer to interface with colleagues, because as soon as an issue comes up in a room you need a person who can identify the problem in concrete terms. The idea is that there should be a contact person, Brice, who knows and understands the snags that crop up.
Brice Pescheteau Badin: Too often, people who wanted to talk to Drouot Enchère spoke to two individuals: the general manager of Drouot Patrimoine, Olivier Lange, and its president, Alexandre Giquello, who were mainly there to manage the group. the idea now is to have a single person who manages and looks at what happens at Drouot while also being involved in strategic development and orientations. There was an abundance of collegiality and ideas but they didn’t take shape fast enough. So the board of directors chose to have a clear policy and direction, which the shareholders overwhelmingly approved. The reforms passed at the shareholders’ meeting can’t be carried out without a strong and effective referent. That doesn’t change the organizational structure but facilitates relationships with auction houses and the Drouot Enchère teams, whether they work on the operational, technical or communication side. To assist me in managing and developing Drouot Enchère, the board of directors appointed a strategic committee made up of four colleagues: Géraldine d’Ouince, Charles-Édouard Delettrez, Thomas Müller and David Nordman. They play a consultative role in identifying strategic directions and relevant resources.

What reforms does the director of Drouot Enchère need to implement?
BPB: The October 2 shareholders’ meeting set clear directions. The idea is to consider Drouot an auction market platform intended to host non-shareholding auction houses to organize their sales there. My role will also be to listen and explain to them that they’re making the right choice. Access to Drouot will be subject to the board of directors’ approval at the same rate conditions as the shareholders. The idea is to make Drouot a public auction hub in France. Of course, Drouot is also opening up to foreign auction houses, not just French ones. But the idea is not to imply that things sell better in Paris than in the regions. We see that every week with the results published in La Gazette Drouot. It’s to apply to the auction house the formula that made La Gazette and Drouot Digital successful, two group subsidiaries that host advertising and live online only and buy-now sales by French and foreign auction houses. They prove that the name Drouot is a unifying force for the profession and its clientele. The rooms of the auction house can now accommodate the same diversity of operators.
AG: I’d like to point something out. In a context that’s very different from when there was a monopoly (established by Henri II in 1556 and abolished by the act of July 10, 2000, which allowed international auction companies to operate in France—Ed.), the right questions must be asked. The main one is, “Why did some of Drouot’s shareholding auction houses decide to stop selling there?” The answer is easy. We weren’t attractive enough. Our job is to restore Drouot’s rank as a place operators can't afford to do without because of its legitimacy as a marketplace. That’s the general idea behind the reforms that have been passed. We can’t force operators to come back. That was tried with the policy of compulsory shareholding to sell at Drouot, which no longer reflects the economic reality.
BPB: We hope that the possibility of selling at the Hôtel Drouot, in the heart of Paris, will be an additional argument to help our non-shareholder colleagues from all horizons convince their sellers to entrust them with an auction. The appeal of the Hôtel Drouot is a reality: just look at all the auction houses that have popped up in the surrounding area over the years. But let me remind you that selling in Drouot’s neighborhood doesn’t have the same cachet as selling at Drouot.

Has the health crisis and its impact on the profession played a role in these changes?
AG: The two lockdowns in 2020 sped things up. It’s time to ask some questions and be intelligent. What drives me is the potential at our disposal, which we’re going to try to fulfill because we have a card to play. I repeat, we’re all going to succeed together by convincing people to back our project, not by forcing them to.
BPB: Covid has certainly accelerated these changes. Remember that they were decided before the second lockdown. Of course we saw that auctions could take place without exhibitions and that some buyers are fine with that. But we also heard that many of our customers are tired of having to trek out to warehouses in the distant suburbs to pick up the acquisitions they purchased online, and that they’d actually rather see them before buying. There’s obviously still a need for an auction house where exhibitions, sales and storage are all under one roof. That’s Drouot’s competitive edge: hosting all the sale-related operations while using modern technology. This development continues and Drouot Digital’s success proves it.

Aren’t you worried that live online sales might replace traditional ones?
AG: These are singular times. People have gotten into certain habits, but it would be premature to draw conclusions today. It’ll take six months or a year for people to get used to new ways of doing things. It’s easy to buy online when you’re cooped up at home but a bit harder when you’re at work. Buying and selling habits will surely change but we won’t really know how until after a whole season goes by. Drouot has two kinds of customers, auction houses and buyers. We’re going to offer OVV (opérateur de vente volontaire: voluntary sales operator or auction house) customers the best possible service while also focusing on individual buyers—professionals know the score by heart—notably by creating a concierge service, a very important thing. Obviously, the reform undertaken a few months ago will certainly have to evolve to meet the challenges of the second lockdown, and perhaps a third. Conditions in December 2022 won’t be the same as they were in December 2020. That’s very important and it’s the job not only of the board of directors, but also everybody at Drouot, including employees, to adjust to these new circumstances. The pre-lockdown world is probably gone for good.
BPB: In 2020 Drouot Digital attracted a very high number of international buyers. Maybe we were arrogant to think that the whole world knew us: that’s true for our name but perhaps not for our auctions. But I’ve got plenty of faith in the future because in a competitive environment I think it’s commercially better to offer our customers an exhibition at the Hôtel Drouot accompanied by a paper catalog rather than a solely online sale and a completely digital catalog. What’s more, you’re exhibiting in a magnificent building that 3,000 to 5,000 people flock to every day in normal times. Proving that I’m right to be optimistic, the auction houses that held closed-door sales in December despite Drouot’s reopening, because they were organized that way, launched a massive room rental policy for the first quarter of the year. Better yet, six auction houses led by young teams submitted and had their requests approved even before we announced the new terms of access to Drouot. Some even bought 7,000 shares in the group! Others plan to do the same this quarter.

What points will you stress to draw new auction houses to Drouot?
BPB: Drouot is quite simply French know-how: exhibitions, appointments and the social connections. It’s the only place in the world that welcomes a very wide range of people, from local buyers to a traditionally very international clientele. The latter dimension has been heightened by Drouot Digital, which attracts users in 90% of the world’s countries. Now, for a classic sale, we might have buyers from 20 to 30 countries, often on the five continents. Our operations have been streamlined for a better comprehension of the sale and exhibition days. We’re now open every Saturday, which lets us hold two-day exhibitions and one-day sales upstairs every Tuesday and Friday. On the ground floor, we still have one day of exhibitions and one of sales. The flexibility of an auction house is also important, as the sales of the André Breton, Pierre and Claude Vérité and Paul-Louis Weiller collections proved in the 2000s. It’s absolutely possible for any auction house to rent a floor for a week to hold one or more auctions. Drouot allows ambitious projects to succeed in excellent conditions.
AG: We’re going to ensure individualized service for every operator because each has its own working habits, which must be respected. Moreover, a 2.0 room was created at 12 rue Drouot during the November 2020 lockdown. This initiative will become permanent, offering a room specially fitted with screens and all the requisite technology. But the current crisis shows that auction houses and bidders need physical exhibitions, social contact and opportunities that spur sales. People who come to Drouot discuss, listen, talk to experts, swap information, socialize over a cup of coffee, etc. It’s a place where people can easily meet in Paris. Lastly, I’ll just mention the success of the exhibition at Drouot of the famous painting Éric Turquin attributed to Caravaggio, which was sold in Toulouse. Attendance and interest were very high, proof if any were needed that Drouot plays a key, unifying role on France’s auction market.

Worth knowing
Drouot Patrimoine is the parent company of Groupe Drouot, headed by Alexandre Giquello, president, and Olivier Lange, managing director. The entity has several subsidiaries: Drouot Enchère, which brings together all of the auction house’s activities; Drouot Logistic, for handling; Drouot Digital, the digital subsidiary; Auctionspress, which publishes La Gazette Drouot and Le Moniteur des ventes; and Drouot Estimations, the auction house.

Success for New Streamlined Drouot.com Website
Not to be missed
Interviews