In 2019, a couple and three stonemasons found a trove of coins dating from the reigns of Louis XIII and Louis XIV. This wonderful discovery will soon be coming to auction. 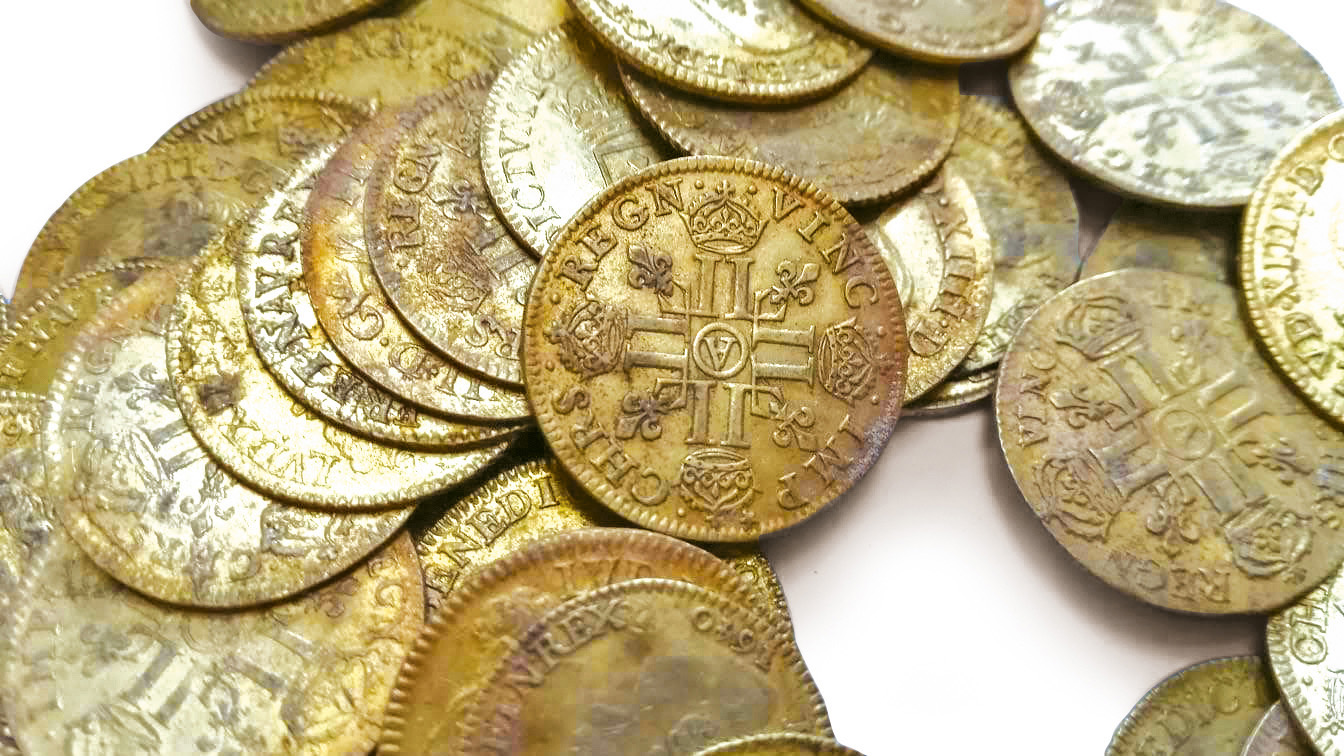 This is a tale about the incredible discovery of a buried treasure—the kind of adventure everyone dreams about. It transformed the quiet lives of a couple that bought a property in Brittany and the three stonemasons they hired to do the renovation work. The craftsmen found two containers filled with Louis d'or (gold coins), bestowing them all with good luck.

The couple bought the property in Plozevet, near Quimper, in 2012. Seven years later, they started work to combine two buildings, a barn and a former stable. They hired three stonemasons, one of whom is a compagnon du devoir, to do the job. One fine morning in October 2019, they found a metal box inside a wall that, it turned out, was filled with gold coins. Several days later, they happened upon a purse hidden above a beam. In all, 239 gold coins from the 17th-century were inventoried.

By and large, they are in a very good state of conservation—an important point for collectors and museums. Twenty-three were struck under Louis XIII, while the other 216 bear the likenesses of his son, Louis XIV, at different stages of his life, but always with his best profile. The oldest coin, an ecu struck in Amiens (€700/800), is dated 1638, and the most recent ones, including a Parisian double Louis ecu (€2,600/3,000), 1692. They will be sold individually, with estimates ranging from €600 to 15,000.

Royal Savings
While the discovery was made in 2019, it remained a closely guarded secret after the owners, fulfilling their legal obligations, filed a declaration at the town hall in the city of their residence. The Regional Preventive Archeology Department in Rennes conducted an administrative investigation to determine the coins’ authenticity and find out whether there is any trace of them in the department’s archives. It turned out that the property is the oldest part of a 13th-century manor that belonged to a family of wealthy tradesmen and farmers until the mid-18th century. At this point, a bit of history is necessary. In the 17th century, the Iroise Sea was a key shipping route for exporting Bordeaux wines to England and grain to Northern Europe. But as the uncertainty of war was always hovering on the horizon, money was hoarded in anticipation of dark times. Another indication of the coins’ possible link to trade is that they were minted in 19 French cities from Amiens to Toulouse, Rouen, Poitiers, Rennes and others across the vast Kingdom of France.

The Louis d'or, a gold coin patterned after the Spanish pistole and created under Louis XIII on March 31, 1640, accounts for the overwhelming majority of the trove. Mr. Vieu, a numismatics consultant mandated by the auction house to appraise the coins, underscores the presence of a 1646 double Louis d'or with a long lock struck in Dijon—one of the group’s rarest pieces—(€15,000), and a 1640 Louis XIII with the Templar cross minted in Paris (€8,000/12,000). As noted above, the last coin dates from 1692. Did the owner suddenly die? The heirs do not seem to have been aware of the trove’s existence, which may explain why it has survived intact until today. But the story is not over yet: the departmental archives are trying to find out the owner’s name.

"It’s Gold!"
French law is very precise on the subject of discovering treasure. This word—in the sense of article 716 of the Civil Code—applies only if the objects are proven to have been found by pure chance and have no identified owner. Items found during a planned search and/or with the use of special equipment, such as a metal detector, are excluded from this framework. on July 7, 2016, the law was amended to bolster the fight against trafficking in cultural property. Henceforth, there is a presumption of state ownership for any archaeological heritage of recognized scientific or historical value regardless of where it is found. People who fortuitously find a hidden or buried object are necessarily aware that they do not own it and therefore cannot argue in good faith that it is theirs. This is why the find must be reported. The state has five years to investigate and decide whether or not to acquire it. In this case, the date of the manor’s purchase (2012) was taken into account, not the date the trove was discovered, which was after the new law came into force. Therefore, in the eyes of the law, half of the treasure belongs half to the stonemasons and half the owners of the property where it was found.

The discovery has stirred up passions far beyond France’s borders, and the results should be as high as the excitement generated by this stroke of good luck.

Minting: Louis XIV and the Roman Empire
Newsfeed
See all news
Restitution, Nepal Seeks to Reclaim its Heritage
In Aubusson, the Cité internationale de la tapisserie Is Thinking Bigger
Tempera Work by Mark Tobey Approaches the Million Euro Mark
Gwangju Biennale Postponed to 2023
Not to be missed
Spotlight
An Invitation to the Ball with Magnificent Evening…
A wardrobe in exceptional condition takes us back to the splendors…
Spotlight
Eugène Gaillard, Samuel Bing and Émile Gérard:…
The destiny of three men converged on this iconic piece of Art Nouveau…
Spotlight
First Appearance at Auction of a "Saint Peter"…
A splendid find—a Ribera in fine condition, signed, dated and with…
Spotlight
The Romantic Treasures of the Pierre Collin L…
Some 300 books form the collection of Romantic illustrated books…