A Table Commemorating the Liberation of France by the Allied Forces

Mystery shrouds this unique, previously unknown table made in 1947 to honor the Allied landings in Normandy and the liberation of France. 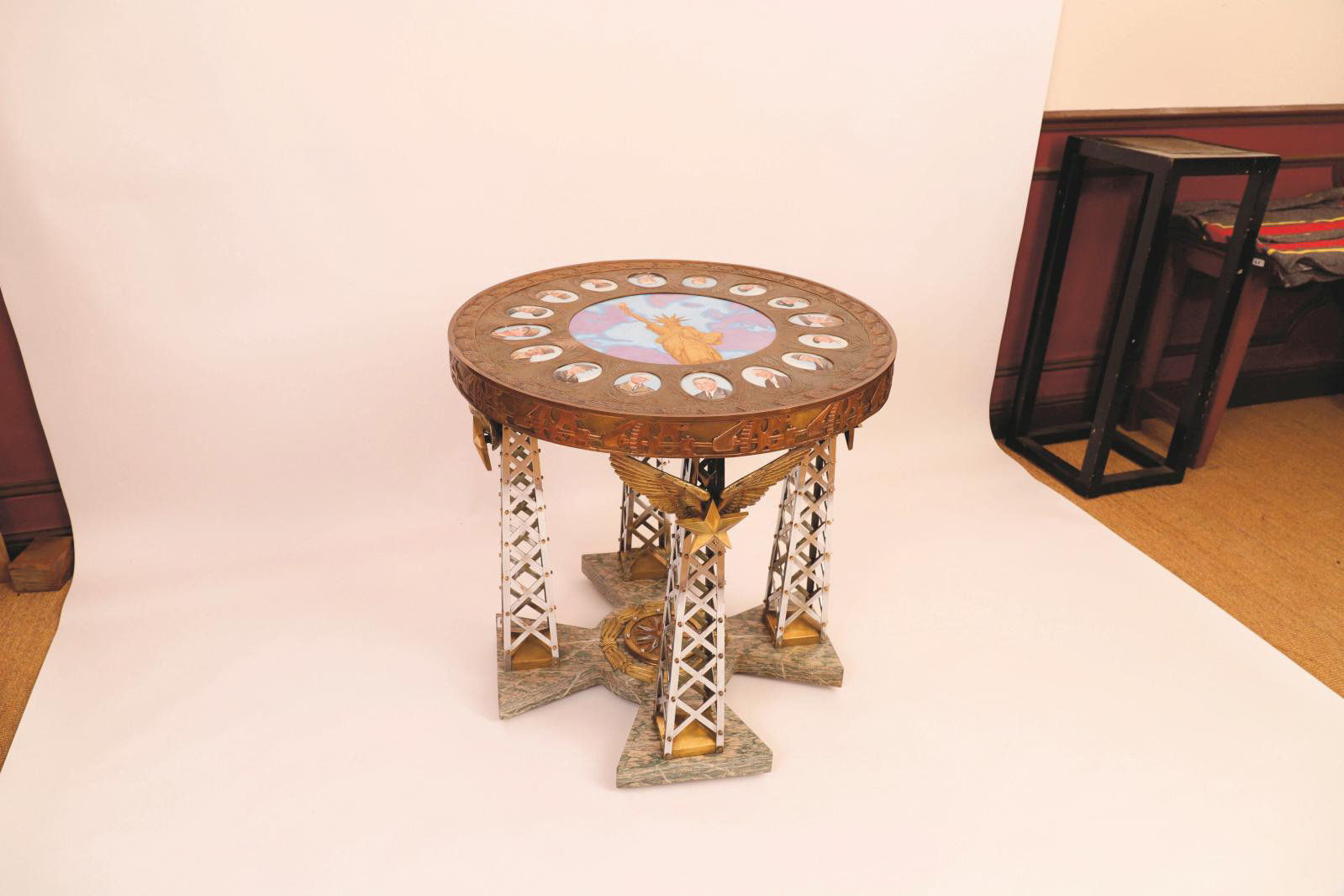 The story has been told many times: an item forgotten in the back of an attic for generations unexpectedly turns out to be very valuable. History repeated itself near Chantilly, less than 31 miles (50 km) from Paris, with the discovery of an astonishing table commemorating the D-Day landings and the liberation of France in a house that was about to be emptied. Found in mediocre condition, it was restored before being presented to an auctioneer. Totally unknown, it is shrouded in mystery and raises many questions. It was once thought to be a masterpiece of craftsmanship, but the multiplicity of its materials, and, therefore of the artisans required to make it, rules out that possibility. The Maltese cross-shaped base is made of green and pink marble, and the astonishing plinth recalling Gustave Eiffel's architecture or perhaps evoking in a military vein, a transmission tower, is in chrome-plated bronze. A string of 16 chased bronze and porcelain medallions featuring portraits of Allied generals and heads of state decorate the bottom. The central composition is signed "AL Martin", the medallions with the monogram "LM". The rather amateurish workmanship rules out the hypothesis that the table was displayed at an international exhibition. The striking Statue of Liberty in the center suggests that it was more likely commissioned by an American, but the inscription under the large central porcelain plaque is inscribed in French: "Table de la liberté n°1, année 1947 France". The table’s creator, then, numbered it. Perhaps he intended to make other versions.

A Tribute
Like the pedestal tables featuring portraits in porcelain of the Bourbon dynasty produced after Louis XVIII ascended to the throne, this one pays solemn tribute to the leading figures behind the D-Day landings and the liberation. That it was made in 1947 is no coincidence: on May 21 of that year, a law was passed in France establishing "remembrance celebrations on the occasion of June 6" and the national commemoration of the Battle of Normandy”. That is undoubtedly why the table displays the portraits, with the flags of their nations, of the four Allied heads of state behind the operation: General de Gaulle, Winston Churchill, Franklin Delano Roosevelt and Canadian Prime Minister Mackenzie King. Surrounded by a frieze of Liberty ships, which participated in D-Day, the table features the portraits of twelve Allied generals above laurelled eagles. They are echoed by wings with stars in the center at the top of all four feet (the more stars a general has, the higher his rank). The most illustrious ones are Philippe Leclerc, George Patton, George Marshall, Pierre Koenig, Dwight Eisenhower, Douglas MacArthur, Bernard Montgomery, and Arthur Tedder.
Vente de rentrée Oise Enchères
Chantilly - 4, avenue Bourbon - 60500
Hôtel des Ventes de Chantilly Oise enchères
Info and sales conditions
Catalogue