For African and Oceanic art expert Patrick Caput, now selling the collection he shared with his wife Béatrice, what matters is not an object's size, but its quality. The 43 pieces up for sale at Drouot, mostly miniatures, were thus not bought for their modest proportions. Unlike some enthusiasts who swear by small objects... 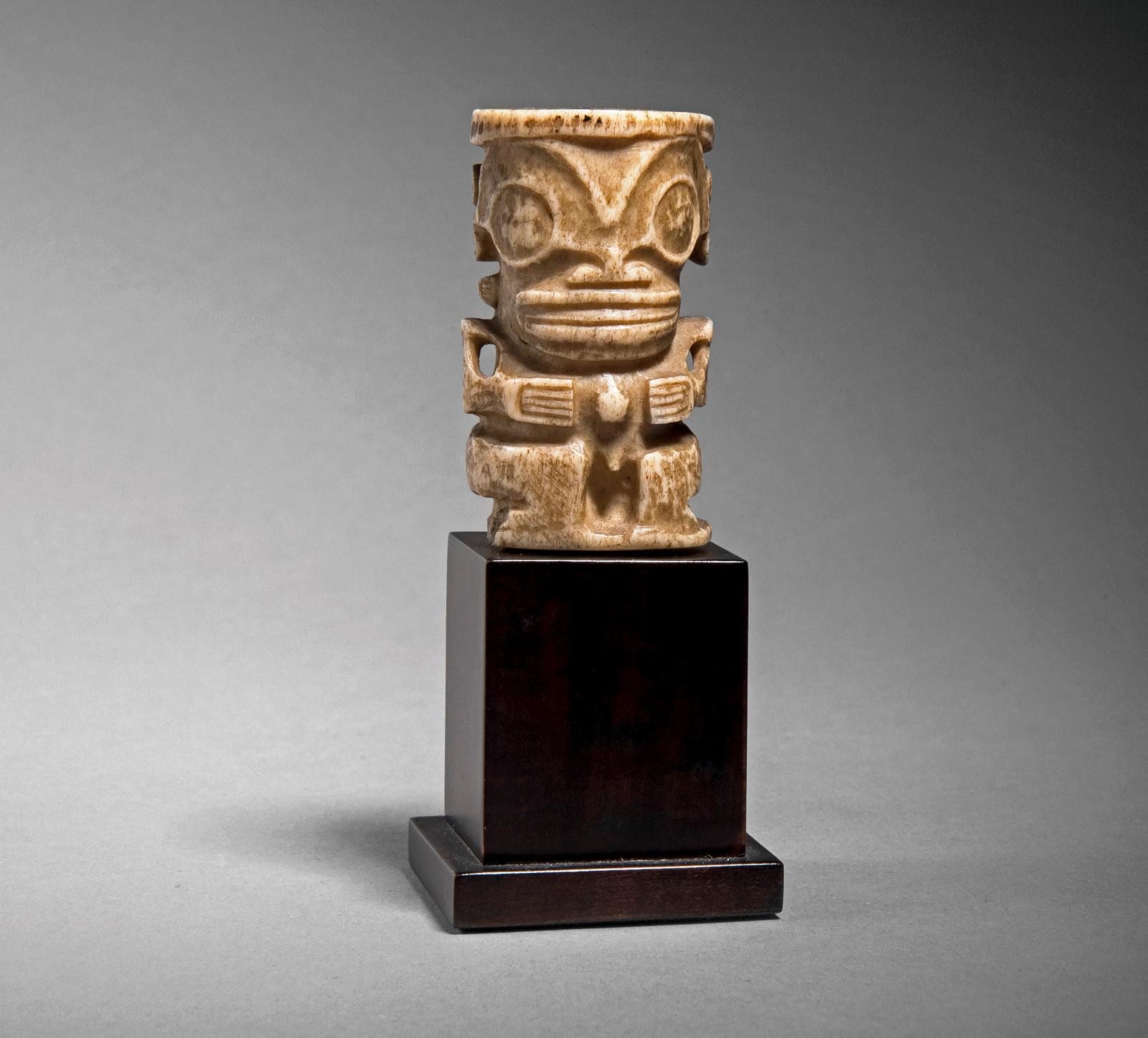 For African and Oceanic art expert Patrick Caput, now selling the collection he shared with his wife Béatrice, what matters is not an object's size, but its quality. The 43 pieces up for sale at Drouot, mostly miniatures, were thus not bought for their modest proportions. Unlike some enthusiasts who swear by small objects alone (like the Stanoff couple, whom the collector knew well), Patrick Caput jokes that he "also likes big pieces!" As witness a Proto-Senufo dance helmet from Mali, whose 55 cm are predicted to make €80,000/100,000. But the advantage of a catalogue like this, apart from its consistency, is that it offers the reasonable estimates characteristic of miniatures. "It's possible to acquire masterpieces for a few thousand euros," says Bernard Dulon, the sale expert alongside Alain de Monbrison. It is a matter of "honouring" collectors, emphasises Patrick Caput, by providing not only the entire stock of miniatures in his possession, but also his "finest pieces".

The gallery owners' friend
When he was 18, Patrick Caput discovered African art at the Musée de la Porte Dorée in Paris. His father, a doctor and major collector of Chinese terracotta, undoubtedly transmitted the virus to him. His next key influences arrived in the shape of René Rasmussen and Charles Ratton: the top dealer with whom he incidentally "shared" certain pieces in this catalogue, like a Chokwe sceptre from the Moxico school, famous for its artists (€280,000/300,000). According to Bernard Dulon, this insignia of power, obtained by Ratton before 1930, is "one of the last sceptres from this ethnic group" – which, as we know, has one of the highest price indexes in this market. Patrick Caput constantly fostered exchanges with the gallery owner, The Saint-Germain-des-Prés district naturally became his hunting ground. He was accompanied on his expeditions by his wife Béatrice, "whose blessing he always sought", says Alain de Monbrison. His knowledge of Africa, where he lived for professional reasons (particularly from 1983 to 1986 in Gabon), led Sotheby's to involve him with the opening of its first tribal art department in France. He left it in 2015. The passion of the now international consultant became his work.

Only keeping the best
Patrick Caput initially focused on masks – here we see a polychrome Mossi specimen, known as "the sparrowhawk", which was, unusually, worn on the top of the skull (€25,000/40,000) – and later on statuettes. The objects were few (the couple had limited means) and came from a limited number of regions, mainly Central and Western Africa with incursions into Borneo and the Marquesas Islands, but the leitmotiv was always the quest for perfection. "I constantly replaced my pieces with better ones." In this way, the "living" collection improved as time went by and the bibliophile read more and more. For example, Patrick Caput has only kept one of the dozen Dan masks that have passed through his hands. Likewise with utilitarian objects, of which only the crème de la crème now remains: the Shona headrest once belonging to Charles Ratton (c. €30,000), with interlinked rings evoking the one owned by the Herseys, sold at Sotheby's New York in 1987, and a large Boa spoon (Democratic Republic of Congo), reserved for high-ranking Bwami initiates, and the ultimate in clean-lined forms. As well as belonging to the Englishman William O. Oldman, undoubtedly the greatest collector of Oceanic and African art in the early 20th century, this piece (€18,000/30,000) is one of the few ivory pieces in a collection dominated by wood and a love for ancient patinas.

Masterpieces ahoy!
Gazing at us with mysterious intensity through eyes in hollowed-out pearls, this 14-cm ancestral figure (€80,000/120,000) with its characteristic scarification is a concentrate of the powerful Gangala style in sculpture: the very essence of Bembe art. Its first owner, Max Pellequer, nephew by marriage to the dealer André Level and financial consultant to Picasso, acquired it in the 1920s. Bought at auction at "30% more than its current estimate", says Bernard Dulon, this is one of Patrick Caput's most recent instant loves. An opportunity to be seized, as is a delicate Luba reliquary statuette (Democratic Republic of Congo, €80,000/120,000). This seems like a distant cousin of the Luba caryatid in the former Stephen Chauvet collection, which lorded it at the top of the staircase in Maurice Ratton's home and captured Patrick Caput's heart. These treasures are completed by an Ivipo'o bone ornament with a remarkable iconography, as it represents a tiki and his son on the back of the same object (€30,000/40,000). Having belonged to Paul Rupalley and Charles Ratton, it is "a collector's dream" according to its owner. Entrusted, and I quote, to the "only auction house that rivals the international brands in the sector", it is now poised to give great joy to others.

Do you feel a particular attachment for any pieces in the catalogue?
The Lobi statuette (lot 5 – Ed.) is a particular favourite of mine. A great many of these objects were produced in contemporary times for traditional or commercial purposes. But its great age is evident, if only in terms of the crusty patina and brownish-red marks of use. We have even found the remains of feathers on the hips. It is an object that was used a great deal.

What makes it so desirable?
Its unique sculptural qualities – the twisting body, the raised hands, the off-centre position of the breasts – are reminiscent of a small bronze by Matisse that once belonged to Stieglitz, "La Vie", which I discovered in Rubin's book on primitivism. We find the same intelligence of forms. In Africa, sculpture is hieratic, so the movement here is very unusual. Lobi sculptures are very rare and generally very rigid, with the same sensitivity. The raised arms are a posture that appears most often with the Tellems, invoking rain. With the Lobis, they protected the family against spells and disease. But that remains a hypothesis.

The sculpture was collected by Maine Durieu, and exhibited in her Paris gallery in 1987…
Yes, like the other Lobi statuette in the catalogue. Maine Durieu significantly helped to popularise this ethnic group in the French market. I met her in the Ivory Coast, when my work took me there. She was well-known for collecting very high quality Lobi sculptures.