In the 1930s, cabinetmaker Eugène Printz and dinanderie (brassware)-maker and lacquerer Jean Dunand joined forces to create some outstanding furniture—as witness this 1934 piece rediscovered in a private home. 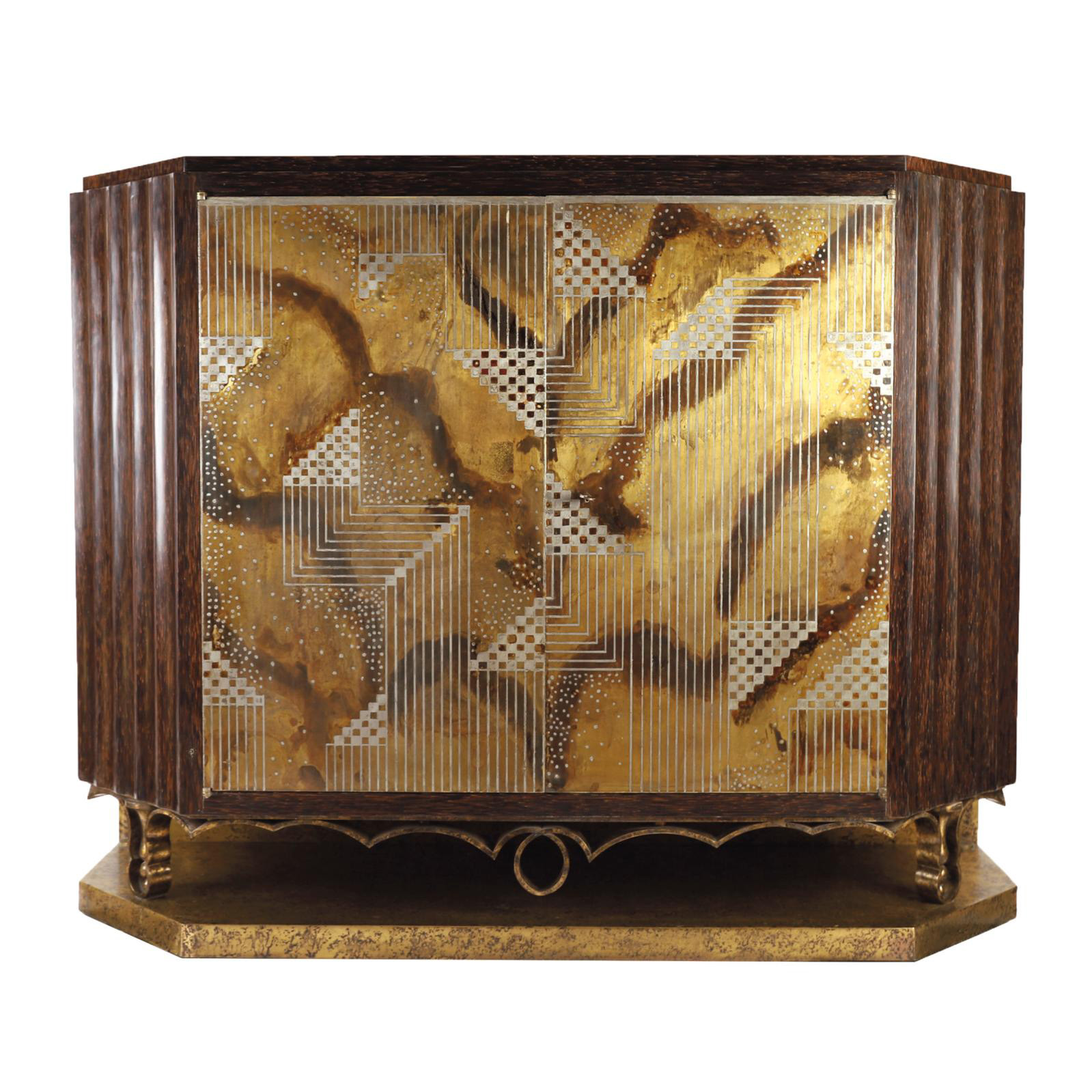 The collaboration between Printz and Dunand began in 1928 and ended in 1942, at the latter's death. It led to the creation of some remarkable bespoke furniture: unique pieces produced in their workshops. Their work together enabled each of these great craftsmen to surpass their own styles.

Now being sold by the nephew of the customer who commissioned it, this sideboard was ordered directly from the Printz Gallery in Rue Miromesnil, Paris, in June 1934. A deposit was paid on November 14, 1934; the balance, paid on June 24, 1935, appears in the owner's invoice, which shows the purchase of a table and chairs at the same time for a total of 11,000 francs (about €9,000 at today's value). Monogrammed "EP", the sideboard is veneered in polished palm wood, while its two doors are decorated with dinanderie: brass plaques with silver geometric decorations that also partially cover the sides. Its base features a sponge-oxidized brass pedestal with balusters and volutes, also in brass. This same structure and decoration is also found, with some variations, in several works of this period, like another sideboard sold for €409,600 on June 7, 2019, at Drouot by the Ader auction house. Smaller than the one here, it does not feature the canted uprights and wavy patterns that set off the dinanderie on the façade.

Harmonious Complementarity
Printz presented the first piece of furniture made in Dunand's workshop at the 1928 Salon d'Automne. At that time, Dunand was already famous for his dinanderie form pieces and Art Deco lacquered works, but the cabinetmaker was only just starting a career that took off that year with the opening of his own workshop in Rue de Miromesnil. His success was due to a natural move towards more contemporary creations, largely inspired by his collaboration with Pierre Chareau from 1919 onwards, as opposed to those produced by the family cabinetmaking business in Faubourg Saint-Antoine, L'Atelier, which he had managed alone since 1905. His work matured in the 1930s, characterized by a unique line, a flawless technique, a love of wood varieties and a touch of the quirky. As he said in 1934 to a journalist of Mobilier et Décoration: "I have always been moved by the mysterious beauty that emerges from mingled curves and straight lines." This style is clearly visible in metal bases sporting volutes, which contrast with the geometric structures of his frames.

This harmonious complementarity is echoed in Jean Dunand's dinanderie panels, which always enhance the clean lines and architectonic qualities of Printz's creations, and never impinge upon them. A sense of originality or how to stand out from the crowd: the cabinetmaker mastered these notions to perfection. He decided to use palm wood on the entire façade of his furniture. This is a precious wood with an attractive grain, but expensive and difficult to work—for example, the veneer sheets, about one millimeter thick, had to be planed from logs no more than 20 cm in diameter. Similarly, while lacquer was fairly common, dinanderie was rarely used in furniture. Printz was one of the few of his kind to unreservedly revel in it.