Surrealist painters were the stars here, and for once a woman, the magnificently provocative Leonora Carrington, took center stage. 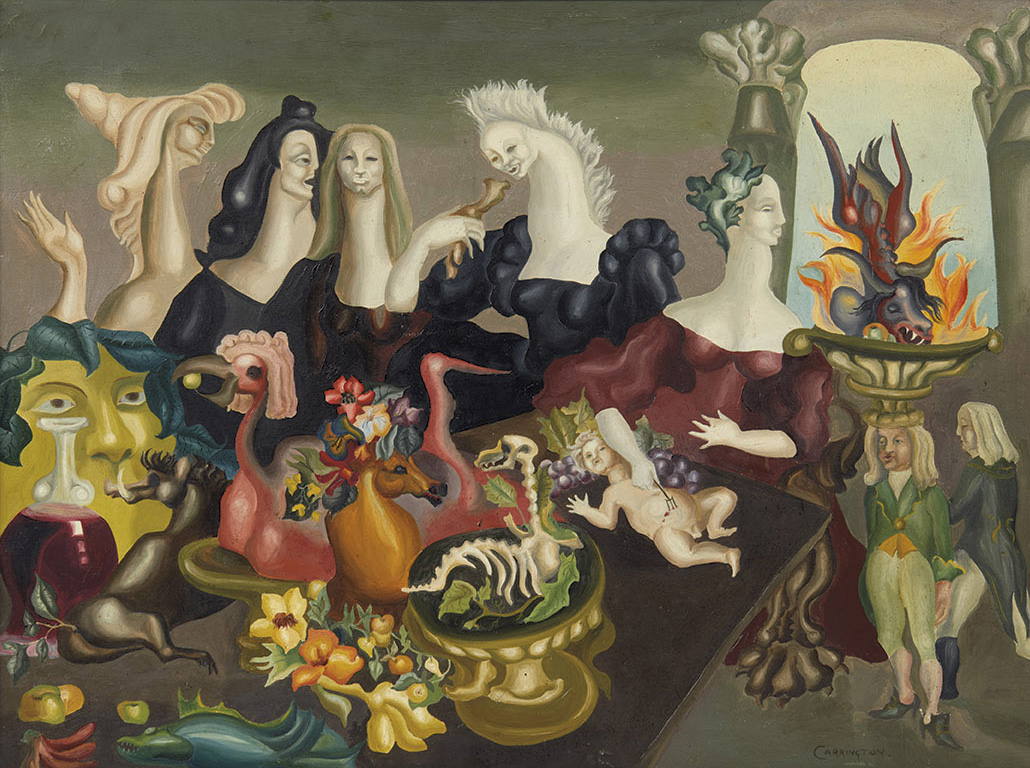 In Gazette 41, “The Spotlight” deftly delineated the path of André-François Petit (1924-2005), a low-profile art dealer who loved Surrealism. The dispersal of his son Stéphane Petit’s estate paid him powerful homage, with a €2,307,897 result that amply rewarded his informed choices, always aimed at promoting the movement. A woman reaped the lion’s share. Two 1938 masterpieces by English-born Mexican artist and novelist Leonora Carrington (1917-2011), seldom found on the French market and not at all anywhere else, did not go unnoticed. The Meal of Lord Candlestick fetched €698,500, setting a French record (source: Artnet), and The Horses of Lord Candlestick (35.5 x 46 cm/13.97 x 18.1 in) crossed the finish line at €254,000. A rebellious, unruly child who took refuge in Lewis Carroll’s fantastic tales, Carrington met and then fell in love with Max Ernst, which changed the course of her career. Together they left England for France, where she met the Surrealists. André Breton was so impressed that he included some of her writings in his publications. Carrington painted these two personal works in the key year of 1938. "Lord Candlestick" is the nickname she gave her father, and horses were her other childhood refuge. Here Carrington superbly and provocatively got even with the strict Catholic environment in which she grew up, which groomed her for marriage and children. In The Meal of Lord Candlestick, the family dining room table is depicted as an altar and the ritual of the Eucharist transformed into a demonstration of barbarism. This work can also be seen as the manifesto of a woman who surrealistically devours the symbols of her upbringing, choosing freedom and an artist’s life instead. The auction continued seamlessly with Salvador Dalí (1904-1989) and Hans Bellmer (1902-1975). The weird Prémonition des tiroirs (Premonition of the Drawers), a bronze clock with a green patina (h. 20.5 cm, l. 39 cm/ 8.07 x 15.35 in) springing from Dalí’s wild imagination and based on his 1934 drawing, chimed a sprightly €123,190 for its three-dimensional version commissioned from the sculptor Onelio Vignando by the Catalan artist. In 1973 the Valsuani foundry issued it in bronze at the request of the André-François Petit gallery. This is one of four artist's proofs.

A Record on Paper for Nicolas de Staël