A Collection of Furniture by Gabriel Viardot, Master of Japanism

A major figure in Japanism during the late 19th century, Gabriel Viardot designed to showcase and drawing-room furniture inhabited by dragons and bedecked with mother-of-pearl. 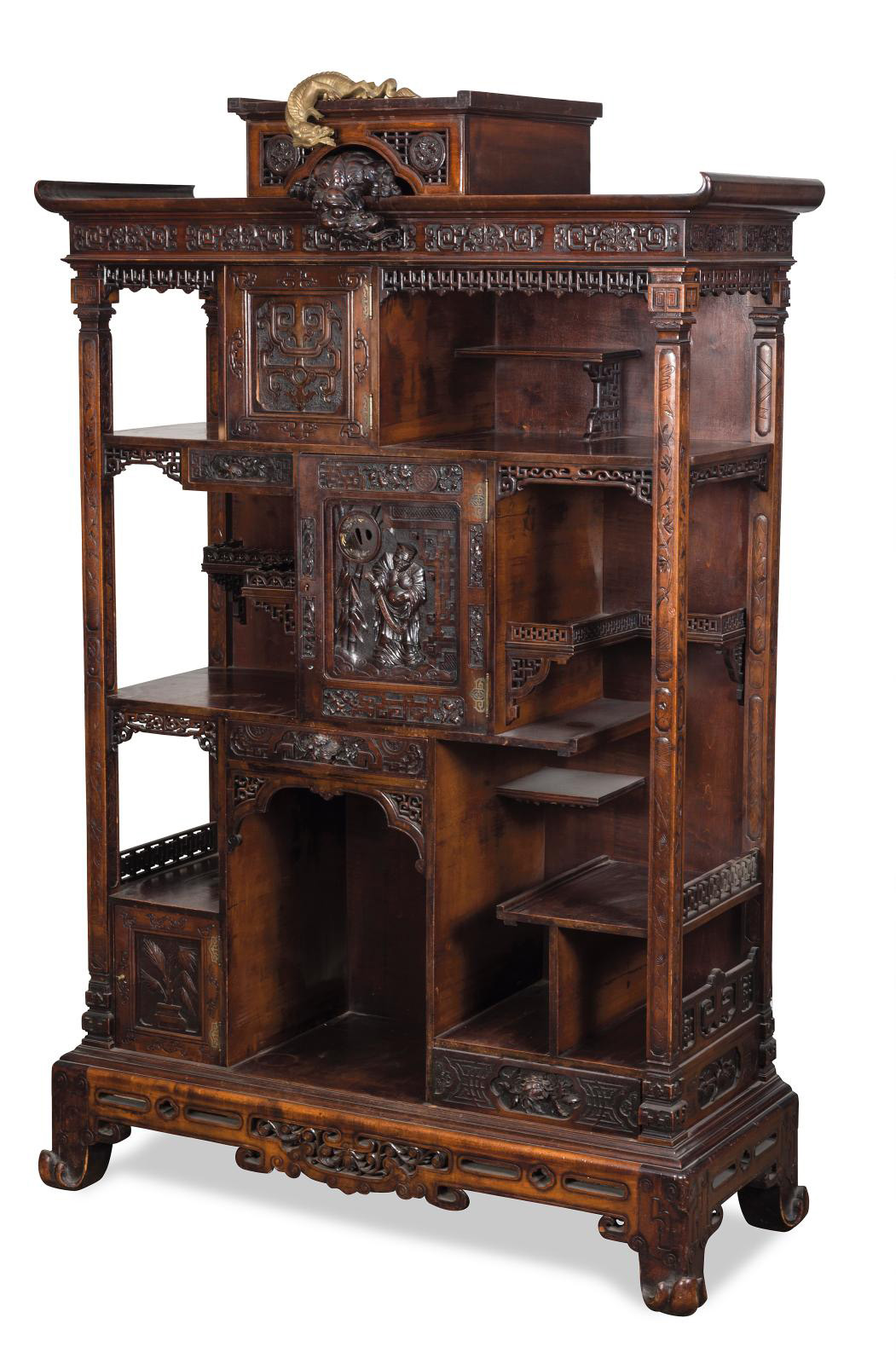 Gabriel Viardot was one of the leading representatives of Japanese-style furniture much in vogue in the late 19th century. Today's collectors can appreciate this work in the sale of a selection of furniture typical of his art: over fifteen pieces at affordable prices ranging from €200 to €3,000. Viardot began his career as a woodcarver in 1849 before taking over the family cabinetmaking business in 1861 and guiding it in a new direction. Although he always kept to the principle of making small-scale drawing-room furniture, he literally revolutionized its style.

In around 1865, abandoning Renaissance pastiches and established historical canons, he was one of the first to start producing furniture in the "Japanese/Chinese style". In this, he followed his contemporaries' interest in the Land of the Rising Sun, sparked by the arrival of a wealth of Japanese objects in the art market after Japan was forced to open to the rest of the world in 1853, and boosted by their appearance at World Fairs. The craze led to the firm establishment of the term "Japonism" (Japanism) (coined in 1872 by art critic Philippe Burty) when it was included in Pierre Larousse's Grand Dictionnaire Universel du XIXe siècle in 1878, and Émile Littré's dictionary in 1886. Viardot was one of its main ambassadors.

His highly imaginative pieces regularly earned him medals at World Fairs from 1867 to 1900; the jury praised "his Japanese furniture, which is always impressive in terms of both tone and accomplished execution." His showcase furniture—display cases and high stands—is particularly well represented in this sale. At a time when the upper bourgeoisie had developed a passion for trinkets, objets d'art and small bronzes, which proliferated in reception rooms, he produced large numbers of this type of piece. Here he called on the services of a hundred and twenty-odd cabinetmakers and carvers divided between two workshops. He was thus able to produce a wide range of furniture sold under his name by dealers in various major French cities, and also respond to private commissions.

This diversity is illustrated by the other pieces in the sale, though they still emphasize his penchant for occasional or small-scale furniture: tables (including a gaming table and a pedestal table), chairs, a chaise longue, a desk and a fire screen.

Inventiveness and Quality
But Gabriel Viardot also produced more imposing works, as witness an 1886 cabinet in the Musée des Arts Décoratifs in Paris. Prestigious commissions, including from President Georges Clemenceau for his bedroom and study, also enabled him to create some extraordinary furniture. His most spectacular group is undoubtedly the set designed to showcase the Asian object collection of Clémence d'Ennery, whose mansion now houses the eponymous museum.

For gallery owner Marc Maison, these cabinets brilliantly illustrate his modus operandi: "Viardot's high-quality furniture involved considerable research work. Like the 18th century's marchands merciers, he chose Japanese panels; you can see clearly how they were cut. Everything was meticulously thought out because there is almost a continuity with the European framework of the furniture. All the ornamental bronzes are creations inspired by Japanese bronzes, sometimes copied almost identically." While the bronze-makers working for him also supplied other Japanese cabinetmakers like Cyrille Ruffier des Aimes, Viardot had exclusive rights for certain models, and his signature features on them.

Dragons, Flowering Plants and Mother-of-Pearl from Tonkin
The furniture in this sale is naturally decorated with gilt bronzes in the form of dragons, which emerge from a crevice in the furniture, cling to a pagoda-shaped cornice, appear on doors, or curl up on a base. Carved in wood, the creature also crawls on the back of a chair or serves as a bracket for a display case. A good omen in Asia, the mythical creature was immediately adopted by Viardot, who considered it his lucky animal. Marc Maison notes that the monster has "a more pointed head than the ones produced by Perret and Vibert, and it lacks the horns given it by Édouard Lièvre." On showcase furniture, the beast is readily associated with palace-style decoration, like flowering plants, butterflies and fowls, delineated by inlaid mother-of-pearl from Tonkin. On another model, sculpted wood dominates, and dragons look down on a warrior carved in bas-relief on a door also decorated with a tsuba.

Viardot's inventiveness knew no limits, and he adapted his creativity to several ranges of furniture. Interior designer Roxane Rodriguez says that he even applied stamps in different graphic styles ranging from the sober to the elegant, contained in an ellipse. Both models exist in this sale, which is offering sixteen signed pieces of furniture. Marc Maison also specifies that "sometimes you find dates, though these are relatively rare, probably added because of the high quality of the work." Other items never sported Viardot's name, as they were marketed by L'Escalier de Cristal, a company founded in 1800, which sold ornamental objects. The cabinetmaker supplied six exclusive models to the famous dealer/editor. Identifiable through their references in Henri Pannier's books (which notably specify the number of copies made and the ornamental variants chosen), these too can be firmly attributed to the king of Japanism.