A Cleopatra by Guido Reni for Lovers of the 20th Century

This Cleopatra discovered by the auctioneer Marc Labarbe and the expert Éric Turquin may be perplexing, but is certainly fascinating. While it is impossible to dispute its authenticity, this tour de force is a far cry from the Bolognese painter's more familiar works. 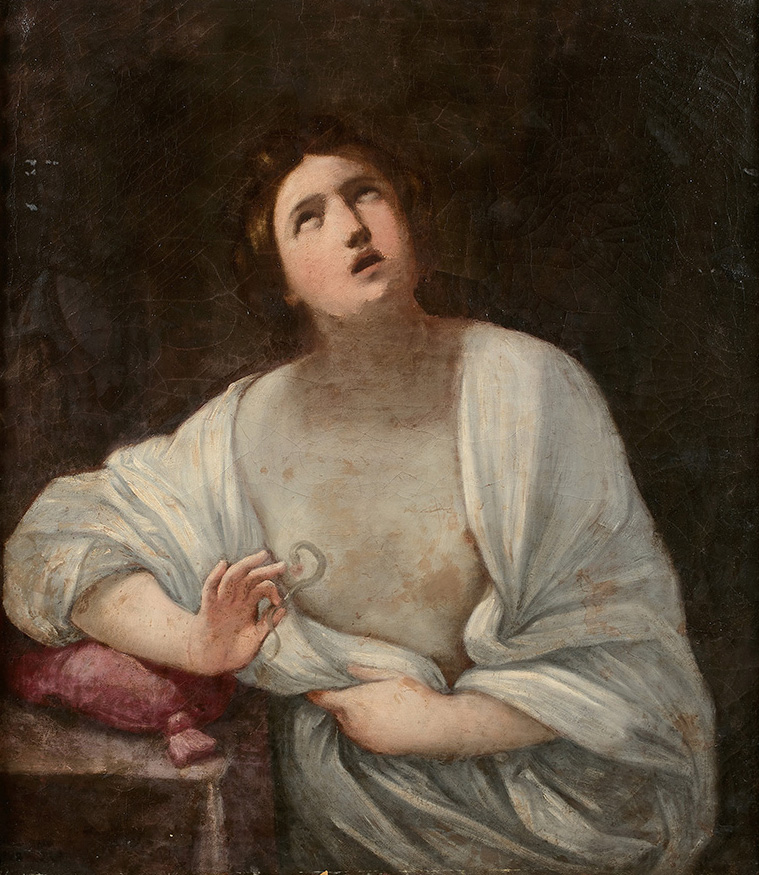 Guido Reni painted Cleopatra at least seven times, starting in the mid-1620s. From the late 16th century onwards, the Queen of Egypt, much vilified by Roman authors, was a source of fascination to writers and artists inspired by so-called "strong women". A tragic heroine who committed no crime, Cleopatra took her life not to save her people or expiate their wrongdoing, but to safeguard her political dignity. For love and honor, since she could not take up arms to defend her cause, she refused to contribute to the triumph of Octavian, who would have taken her back to Rome as a captive. This tragic death was also a considerable achievement on the part of a sovereign who marked a resounding victory by refusing to submit. For two decades, Le Guide (as Guido Reni is called by the French) tirelessly reinvented the scene preceding his heroine's suicide. In the painter's post-mortem inventory of October 1642 (Bologna archives), three Cleopatras are mentioned among the hundreds of works present in his studio, including "a half-figure Cleopatra", identified as once belonging to the Sacchetti collections, and now in the Musei Capitolini in Rome. However, the latter is oval and Richard E. Spear, who published the inventory, already had some doubts as to its being the same work. For Professor Daniele Benati (prevented by the Covid-19 epidemic from seeing the painting recently discovered by the Turquin cabinet, but who confirmed its attribution from photographs), it would seem more logical that this new Cleopatra fits the 1642 description. Proof, if any were needed, that this work is a synthesis of the Musei Capitolini's two paintings of Cleopatra and Lucretia, since the artist took the lower part and drapery from one and the facial expression from the other.

Reni: Moving Towards the Quintessence of his Art
"It is clearly an unfinished painting, but one of extraordinary quality," says Daniele Benati. "To be honest, it seems even finer than the one in the Palazzo Pitti, because it is more abstract and more idealized. In his late period, Reni reached peaks unattained by other painters." These "peaks" have been disconcerting art lovers for almost four centuries. Count Carlo Malvasia, whose Life of Guido Reni is the ultimate reference for specialists, describes his "second style" as "more skillful" and "pleasing" than the first, but you just need to read what Marc Fumaroli wrote on the painter in L’École du Silence, and the feeling of the 17th-century images in Atlanta and Hippomenes, to realize that everything was already present in his early works. While his "first style" is in the tradition of Raphael (the impression his St Cecilia made on Reni when he arrived in Rome is well-known) and the line of the Carracci (with whom he learned the basics) and Veronese, perhaps one day a presentation of all his Cleopatras will show that the distance between the two periods is not as clear-cut as it seems. From the earliest painting, now in Sanssouci in Potsdam, to the latest, each year the painter moved further away from Baroque decorum and feminine finery – that "eloquence of color" cherished by the period –, retaining only what Marc Fumaroli calls the "rhetoric of the body". But in the end, he did not deviate from his path. Purer, more concise and more violent, too, his late works reflect an obvious desire to return to the sources of classical art history. The Italian art historian and archaeologist Luigi Lanzi reports an exchange between the master and one of his students. When the latter asked him "where in heaven, where in the imagination" were the models of the figures he drew on the canvas, he showed him plaster casts of the antique heads he ceaselessly transcribed. Here, the female figure, always the same with all his Cleopatras and Lucretias, also appears as an extension or legacy of Raphael's Saint Cecilia.

"It is clearly an unfinished painting, but one of extraordinary quality," says Daniele Benati.

The Eloquence of Material
Guido Reni sculpted more than he painted forms, lingering on the features with heavy material applied with a thick brush after constructing the face, like the torso, in a white monochrome, making play with the reflections of a pinkish paint. Not taking the trouble to delicately apply this almost earthy material to the contours of lips or chin, he deliberately left unfinished this part of a painting whose very status questioned the idea of completion. In The "Divine" Guido: Religion, Sex, Money, and Art in the World of Guido Reni, Richard E. Spear rightly alerts us to what he considers a confusion by art historians between this notion of a "second style" and that of sketches and unfinished paintings. For him, his colleagues, eager to "elevate the reputation" of the painter, ignored early sources by considering works like this Cleopatra as pre-Romantic or pre-Expressionist manifestos, linking them with Rembrandt, Boucher, Fragonard, Greuze, Reynolds, Goya, Manet and Renoir. However, the way he produced these works was a subterfuge on Reni's part, whereby he prevented his patrons from claiming a reimbursement of their advances by offering them these partly completed paintings. Malvasia describes an artist addicted to gambling who, burdened with debts, burned the candle at both ends at night, and by day ran a world-famous studio where commissions from the good and the great poured in.
This new Cleopatra could be seen either as the work of an eternally unsatisfied or perfectionist artist eager to achieve the quintessence of his art, or, on the contrary, the work of a man keen to return to his pleasures and little inclined to meet the demands of his profession. It is probably both at once. Shouldn't an artist stop painting as soon as he has conveyed his intended message? The hand holding the snake by the fingertips embodies the subject alone. In the exactly contemporary Cléopâtre se donnant la mort by Claude Vignon (Rennes, Musée des Beaux-arts), the serpent is distinctly frightening, but Guido Reni's is more of an earthworm than a carnivorous reptile.
Here Guido Reni was so ahead of his time that he was a world apart from all his contemporaries. The French would think of late Prud'hon, the Italians of Morandi, whom Roberto Longhi considered "un nuovo incamminato", heir to the Bolognese school, the accademia degli Incamminati ("the Academy of those who progress"). In the end, as with his most informal drawings, this new Cleopatra somewhat disrupts our previous view of the seemingly smooth career of the artist who painted the Casino dell' Aurora.

Newsfeed
See all news
Is Battersea Power Station Now a Playground for the Super Rich?
Colorado Artists Unite to Advocate for Missing and Murdered Indigenous People
Tourist Denied A With Meeting Pope Francis Smashes 2 Antique Statues
Digital Illustrator, Grzegorz Rutkowski, is Bigger Than Picasso on AI Platforms
Not to be missed
Spotlight