A Clear Sky Over Henry Moret

Paris, October 2016: at the presentation of the Shchukin Collection, alongside works by Monet, Signac and Gauguin, could be seen a small Breton landscape showing Port Manec’h, a bathing resort in south Finistère. Two houses in the foreground, two little boats in the creek below, and further out, halfway between sky and... 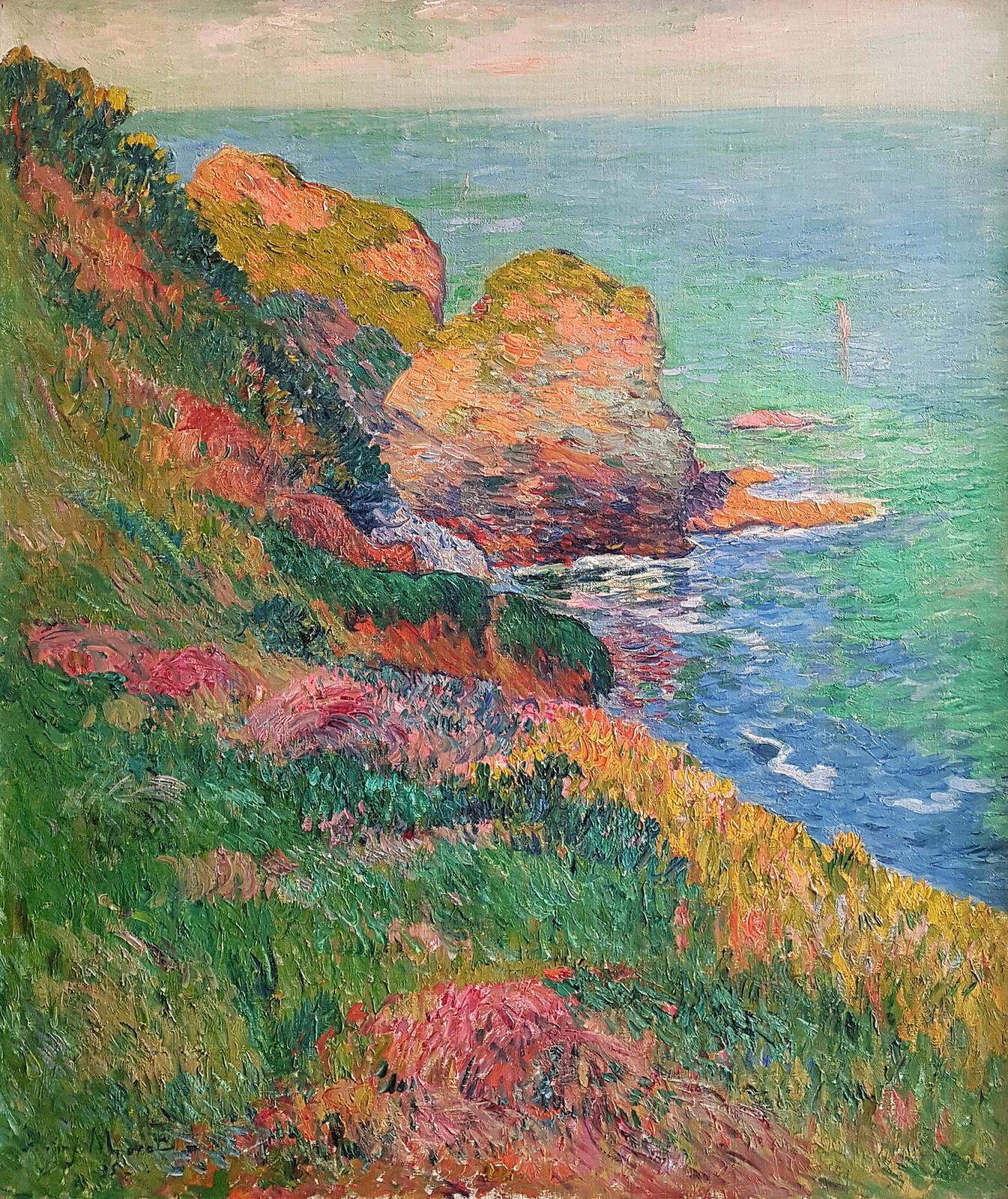 Paris, October 2016: at the presentation of the Shchukin Collection, alongside works by Monet, Signac and Gauguin, could be seen a small Breton landscape showing Port Manec’h, a bathing resort in south Finistère. Two houses in the foreground, two little boats in the creek below, and further out, halfway between sky and land, the lighthouse of Port Manec’h. Its vibrant colours are a subtle mix of green and pink particularly favoured by the creator of this 1896 painting. The artist in question is Henry Moret. This Normandy-born artist with a Breton soul devoted most of his work to Brittany, whose ever-wild landscapes and stormy seas still attract numerous artists seeking fresh inspiration. Contemporary with Paul Gauguin and a friend of Maxime Maufra, Henry Moret is not the best-known of the Le Pouldu and Pont-Aven group who developed Synthetism. "And yet he was an essential part of this movement," says Jean-Yves Rolland, who, together with Marie-Bénédicte Baranger, authored a fine book on the painter published in 2004. "Through his close relationship with the Tahiti master, his understanding of Synthetism, as defined by Gauguin and Bernard between 1890 and 1895, made him a genuine participant in this school, in the same way as Émile Bernard and Paul Sérusier," continues Rolland, who is currently compiling the artist's catalogue raisonné. Moret's presence in the outstanding Moscow-based collection says much about the artist's place in the history of modern painting. Forgotten for a long time, and too often considered a minor figure, he has returned to centre stage in the past few years thanks to various exhibitions and record bids. In 1983 and 1990, two major sales took place at Drouot, involving a group of hitherto unseen 800 drawings, charcoal sketches and watercolours belonging to the painter's son-in-law, Achille Chatenet. These dispersions, which set still unbeaten records for the artist's top five drawings, reawakened collectors' and historians' interest in Moret. In 1988, the Musée de Pont-Aven made the most of this to unveil his graphic work.

An Unassuming Artist
Henry Moret came to painting through both inclination and friendship. Thanks to advice from Jules La Villette, a medical officer, he began taking lessons with Ernest Corroller, professor of drawing at the Lycée de Lorient, who subsequently helped him enter the Ecole des Beaux-Arts in Paris. Here he studied first with Henri Lehmann, then with Jean-Paul Laurens, a famous history painter. Although the institution provided him with classical training, Moret was more interested in what he could learn from the artists of the Barbizon school and the Impressionists, and his heart guided him towards nature and its beauties. He particularly loved painting the landscapes of Brittany, which he discovered on Groix Island, off Lorient. In 1881, he went to live in Le Pouldu: one of the earliest, if not the first, to set up home there. (Gauguin only arrived five years later, in 1886.) Solitary by nature, he did not stay at the Auberge Gloanec with the other artists. Émile Bernard remembered him as "A quiet boy who worked hard and diligently. He would go out into the woods and fields with his equipment, only coming back for meals." He was really not interested in theoretical questions about painting.  "It's true to say that Henry Moret was not an intellectual; he didn't agonise over aesthetic concerns. He was an intuitive with a constantly aware sensibility," say Rolland and Baranger. He observed a great deal and his style changed significantly when he met the artists in the group, notably through his use of the lightly outlined blocks of colour typical of Gauguin. In addition, works from this period evince genuine affinities with those of the master, particularly the "Paysage de Bretagne" from around 1889-1890, now in the Musée des Beaux-Arts in Quimper: an example of the links between the two artists at that time. The paintings of this period from 1890 to 1895 – the artist's best years – are now the most sought-after, like "Les Pêcheuses" of 1894, sold on 6 May this year in Brest (Thierry-Lannon) for €323,290: a record for a Moret painting.

Moret: A Much-loved Painter
In 1895, the painter considerably altered his style, returning to small Impressionistic dabs, without yet sacrificing his flamboyant palette dominated by pinks and greens. This change was probably no accident. That year, Moret met Paul Durand Ruel, the famous promoter of the Impressionists. "There was no exclusive contract between the two men, but the dealer became Henry Moret's biggest buyer, acquiring some 600 paintings," says Paul Louis Durand-Ruel. The artist's output was prolific: around 900 pictures. According to Paul-Louis Durand Ruel: "Moret's painting was remarkably consistent. He may have changed his technique, but he never had good or bad periods. His paintings are interesting at every stage in his career. Value-wise, they have never rated as highly as those of the Impressionist masters, with whom he shared the themes of water and light."  In August 1898, the gallery sold "Le Port Manec’h" to Shchukin for 1,000 francs. A year later, it sold the same collector a painting by Claude Monet, the 1867 "Dame dans le jardin", for 7,500 francs. "As with most painters, Moret's price index dipped sharply after the 1929 crash and after the war, but it's recovering well," says Durand-Ruel. In 2017, a work by the artist garnered an impressive €48,157.93, and over the last thirty years, his average price has been €31,500. Faithful to the artist from Normandy, the Paris gallery devoted seventeen exhibitions to him in Paris and New York, thus gaining access to the American market. "Before the Second World War, the gallery sold seventy paintings to American collectors," says Durand-Ruel, "but today his market is decidedly French." With 685 lots (64.8 %) put up for auction and a turnover of €12.7 M (49 %), France is by far his biggest seller, ahead of the US (25.4 % all sales proceeds) and the UK (21.6 %). Apart from Sotheby's and Christie's, two French auction houses stand out: Thierry & Lannon, officiating in Brest, with 14 % of the lots put up for sale (148) and 7.7 % of the turnover (€2 M), and Millon with €1.5 M (5.8 %). On 18 September, Millon sold several fine drawings including a watercolour, "Rochers de Porspoder (Nord-Finistère)" for €8,060 – well above his average price for a drawing (€1,999.90). Today, it is not rare to see a work by Moret top €200,000, as in February 2017 with the Dupont & Associés auction house. Sold for €229,400, the "Voiliers à Doëlan" is a perfect example of the painter's style, halfway between Synthetism and Impressionism.

From Moret to Poliakoff
Not to be missed
Market Trends