This rare, mysterious, good-sized Olmec sculpture, one of the world’s oldest depictions of acrobats, will be in part five of the sale of a prestigious collection of pre-Columbian art. 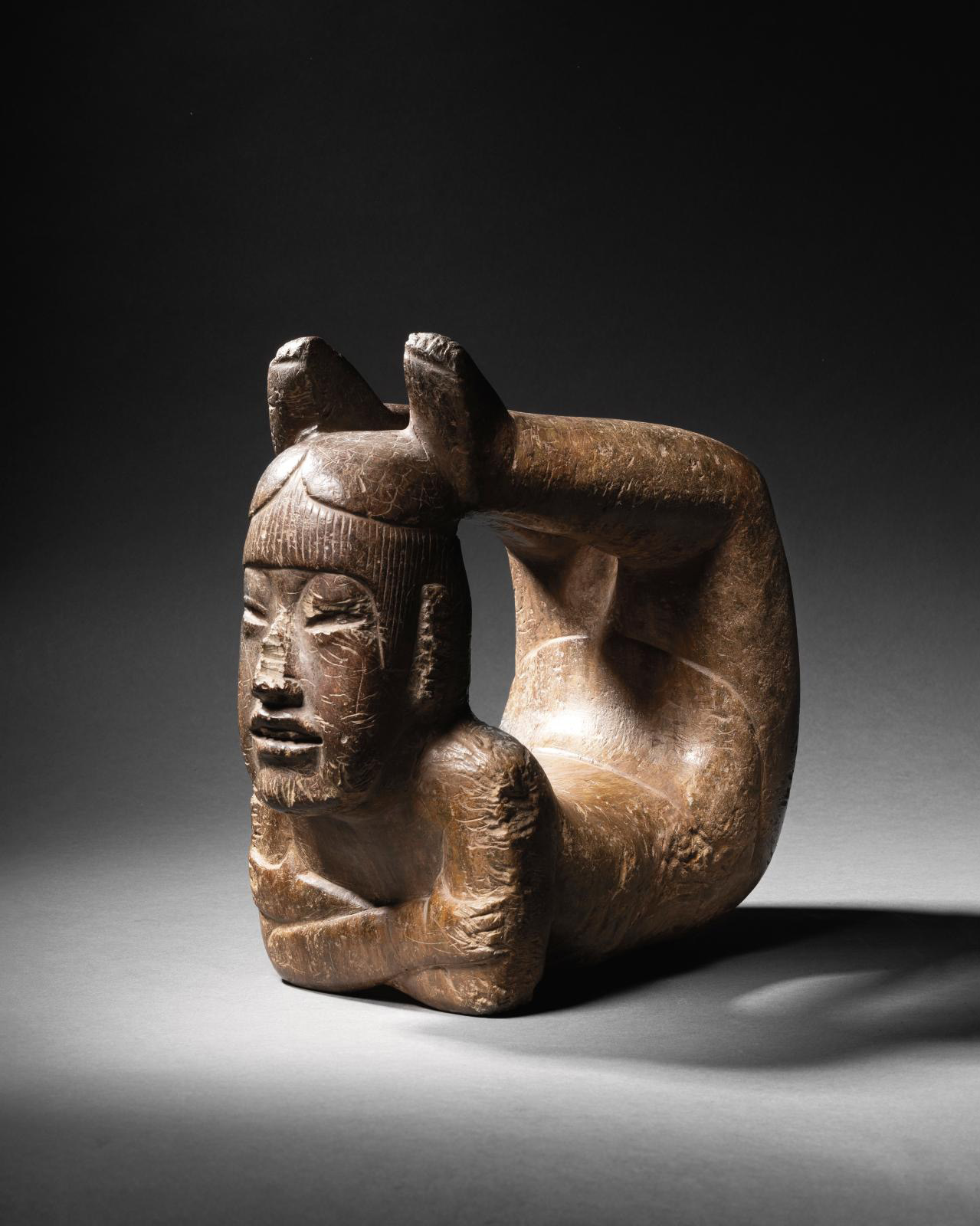 The face is serene, the pose acrobatic. If the sculpture is viewed frontally, the man, peacefully leaning on his elbows, even seems to be resting. His feet touch his head, a flexibility ordinary people are incapable of. The only sign of physical effort is in the rendering of the ribs, made visible by the extremely taut body. The contortionist is Olmec, a name meaning "people of the rubber country". The Olmec people settled along the Gulf of Mexico, where they left traces of their civilization. Dating back to 1200 BCE, they attest to an already advanced culture with imposing ceremonial centers and famous, colossal basalt heads, seemingly related to chiefs, from San Lorenzo, La Venta and Tres Zapotes. Some are three meters high (nearly ten feet) and weigh as much as 40 tons.

While on a much smaller scale, this rare likeness of an acrobat in steatite made between 900 and 400 BCE is large compared to the small statuettes usually produced in the pre-classical period. steatite is a semi-hard stone that can be realistically shaped and carved with fine lines. The headdress features scale patterns worn on hair, depicted by delicately incised lines. The Olmecs did not use iron. stone was worked by abrasion for the sawing of the volumes and the finishing of the details—a work of patience and dexterity. The lack of written documents means it is only possible to have a visual reading of this sculpture, whose meaning and purpose remain a mystery, but others emanating from cultures influenced by the Olmecs have allowed several hypotheses to be put forward. These include a contemporary ceramic from Tlatilco, found in a funerary context, and subsequent Mayan figures in various materials where contortionists can evoke divinities or be associated with entertaining high-ranking officials.

Trade spread the acrobat motif throughout Mesoamerica. This gleeful tumbler entered a New York pre-Columbian art collection—one of the largest in private hands—on the advice of a leading specialist, Peter David Joralemon. It features prominently in The Olmec World: Ritual and Rulership, the catalog for the 1995 Princeton University Art Museum exhibition where it appeared. It comes at just the right time: the Musée du Quai Branly-Jacques Chirac in Paris is hosting the exhibition "The Olmecs and the Civilizations of the Gulf of Mexico" until October 3.

Olmec and Maya Artworks from Distinguished Pre-Colombian Collection Take Off