The year’s first installment of "Drouot Déco", a regular exhibition co-organized by auction house experts, is on view in Room 2 through January 25th.  It assembles an eclectic lot of accessibly priced furniture and art offered in upcoming sales. 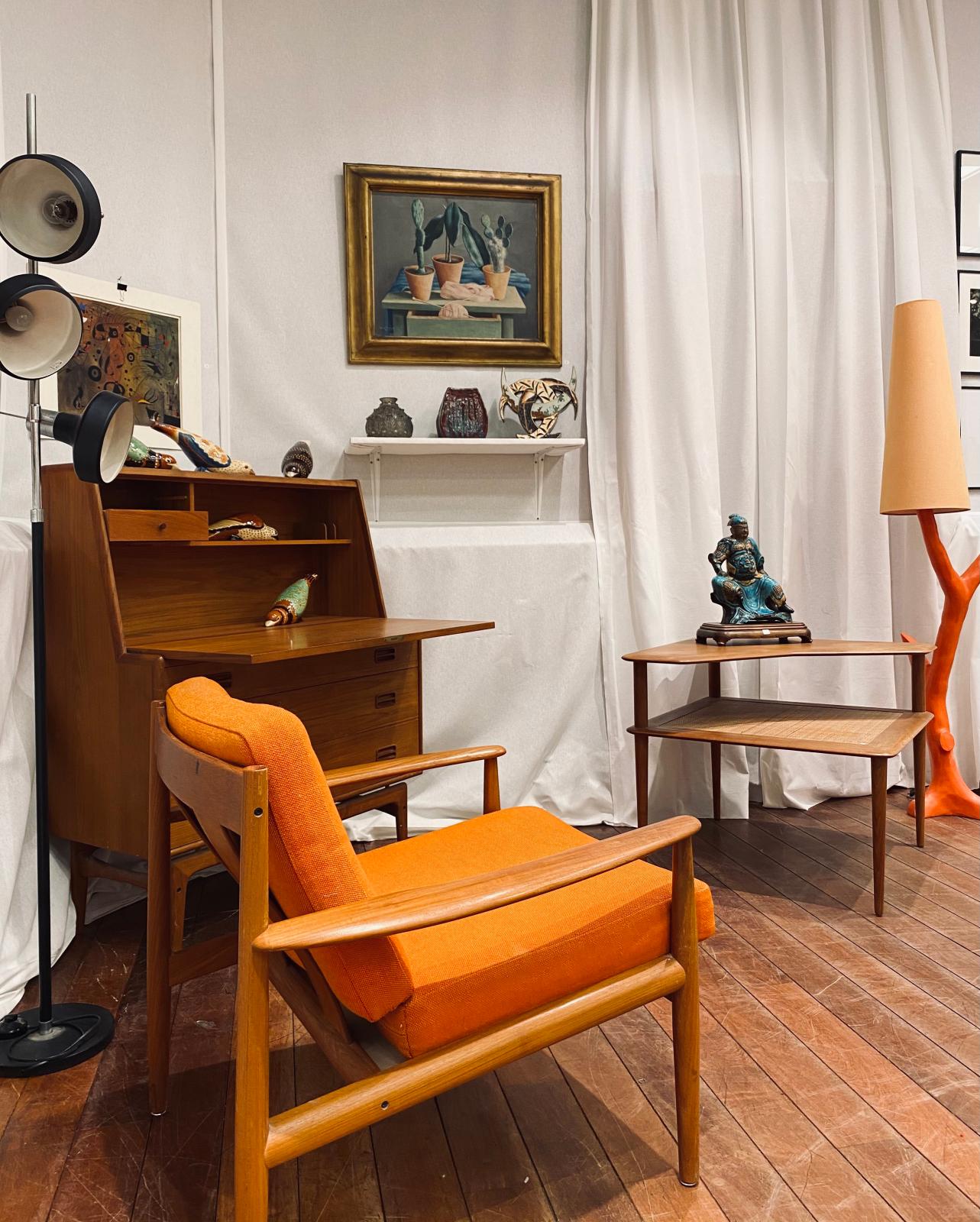 Not every art lover can offer themselves a €698,500 painting by Leonora Carrington or a 4.5 million-euro Qianlong dynasty heirloom vase. Happily, daily sales at the Hôtel Drout propose objects of aesthetic and historical interest that are within financial reach. This first “collegial exhibition” of 2021 is particularly rich in artist’s prints and mid-century modernist furniture.

A recent article about the Roger Passeron Collection in La Gazette Drouot focused on the rising prices of artist’s prints. If you were inspired to explore this sector of the art market, Drouot Déco features a large number of limited-edition lithographs and photographs. These works exhibit the same themes and techniques that define the artists’ easel paintings but are available at a modest price. For example, while Max Ernst’s oil painting Forest recently sold for more than €3 million, his 1956 photolithograph Forest and Sun, estimated at a mere €400/600, derives from the same unpredictable patterns of ‘’frottage” rubbings. Other offerings include an aquatint by Georges Braque, as well as lithographs by Fernand Léger and Kees van Dongen that exploit the lithographic crayon to retain the intimacy of a rapid sketch. Pierre Soulages’ Lithograph No. 9  of 1959 offers a more layered exploration of the medium, with the stone successively obscured by broad overlapping strokes, just as in his oil paintings of the same period.

Pandora’s Box, an original example of Ray Johnson’s correspondence art is also on view. One of a handful of African-American students to attend the mythic Black Mountain College, in North Carolina, Johnson influenced and collaborated with successive generations of the New York artists until his suicide-performance in 1995. Pandora’s Box is a mimeographed collage featuring blurry silhouettes annotated with Johnson’s usual playful instructions to send portions of the work on to another correspondent. Although he anticipated the Fluxus and Pop Art movements, Johnson retreated from the commercial gallery world and assured the diffusion of his art through a postal network of friends and strangers. An untitled work in wax and feather on canvas by Michael Buthe exemplifies his lifelong material deconstruction of the art object. Buthe was a star student of Joseph Beuys, whose influence is certainly evident in the physicality of the artist’s chosen materials here.

Mid-century furnishings abound in this edition of "Drouot Déco". A set of glistening 1970 Knoll desks and tables fashioned in chrome and veined white marble is balanced by a suite of warm Danish teak design from the 1940s and 1950s. A quietly elegant secretary in wenge with a drop-down front in patinated metal embodies the minimalist luxury of Christian Liaigre, whose aesthetic defined the stylish interior of the early 2000s and who died this past year. The exhibition gathers a number of interesting floor lamps. These range from a mass-market model designed in 1960 by Étienne Fermigier for Monix, to the 1989 Trapani, a giganticized branch of coral cast in orange resin by Elisabeth Garouste and Mattia Bonetti, decorators of the Palace night club. Totem Lamp, by Goffredo Reggiani, designer of many now-iconic floor lamps from the 1960s, rises elegantly from a disc of white marble to a shield-like, teak backing that softens the light of three white, cast-glass shades. Finally, a carpet based on the Anthropométrie series of Yves Klein, will bring the electric-blue imprint of his female nude models directly into your living room.

No Drouot sale would be complete without a healthy offering of art glass and ceramics. An impressive signed bowl by Charder, the condensation of the name of the firm’s founder Charles Schneider, testifies to the legacy of the Nancy school of Art Nouveau. Schneider was trained in that tradition, which is represented in "Drouot Déco" by a number of works by Émile Gallé. The Charder bowl, which features a submarine scene in scarlet cameo glass, reflects the updating of Art Nouveau aesthetics and manufacture for a new generation of consumers. Acid engraving and mechanical tools permitted Schneider to massively industrialize production and dominate export to the Americas. A vase by Charles Catteau during his tenure as head designer for the Belgian ceramic works Boch Brothers, equally demonstrates the transition from the vegetal flourishes of Art Nouveau to a more streamlined Art Déco aesthetic. The vase’s strong spherical form and charming pattern of starkly geometricized birds points to Catteau’s familiarity with Cubism and West African art.

Part of the charm of the Hôtel Drouot are the curiosities that resist any attempt at easy categorization. One future sale that is definitely addressed to a niche collector focuses on ephemera associated with bullfighting. In addition to rare early-engraved representations of tauromachy by 16th-century Flemish artist Johan Stradan the sale will feature a magic lantern and sequence of glass plates from 1880 that recount each ritualized stage of a bullfight from the animal’s entrance into the arena to the final coup de grâce. In a slightly less macho offering, "Drouot Déco" opens with a set of haute couture ensembles designed by Chantal Thomass for runway shows of the early 90s. Echoing her revolution in the materials of lingerie design in the 1970s, a Pierrot costume in shimmering white silk is built on a black velour corset and accented by feathery black pompoms. Less practical but equally playful, a bright orange “crinoline parasol” skirt might be literally confused for a garden terrace parasol.

Worth Seeing
The Hôtel Drouot remains open during the Covid crisis.
The exhibition "Drouot Déco" can be visited every day
except Sunday 11- 6 pm through January 25.

The Château de Trévarez: A Magnificent Soul
Newsfeed
See all news
Nepotism Accusations in South Korea After Resident’s Son Receives Art Grant
AirBnB Offers the Chance to Stay a Night in Gaudí’s Casa Vicens for Just €1
Two Yayoi Kusama Infinity Rooms Reopen at Rubell Museum, Miami
After Being Trimmed in 1715 Rembrandt's “The Night Watch” Is Reconstructed by AI
Not to be missed
Exhibitions
Augustin Rouart: Painting as Legacy at the Petit Pal…
The small-scale but dense exhibition devoted to "magic realist"…
Exhibitions
The Musée Cognacq-Jay Explores the Senses in the 18t…
This season, the Musée Cognacq-Jay, Paris, is focusing on the empire…
Exhibitions
The Torlonia Collection’s Marbles Unveiled in Rome
This large private collection of marbles from antiquity amassed…
Exhibitions
The Swiss Exception at the Musée d’Orsay
Does Swiss art exist? The Musée d’Orsay set out to answer the question…