This magazine, which has been surfing the web since 1996, certainly doesn't look its age. We look back at the birth and history of a flagship title in the art market. 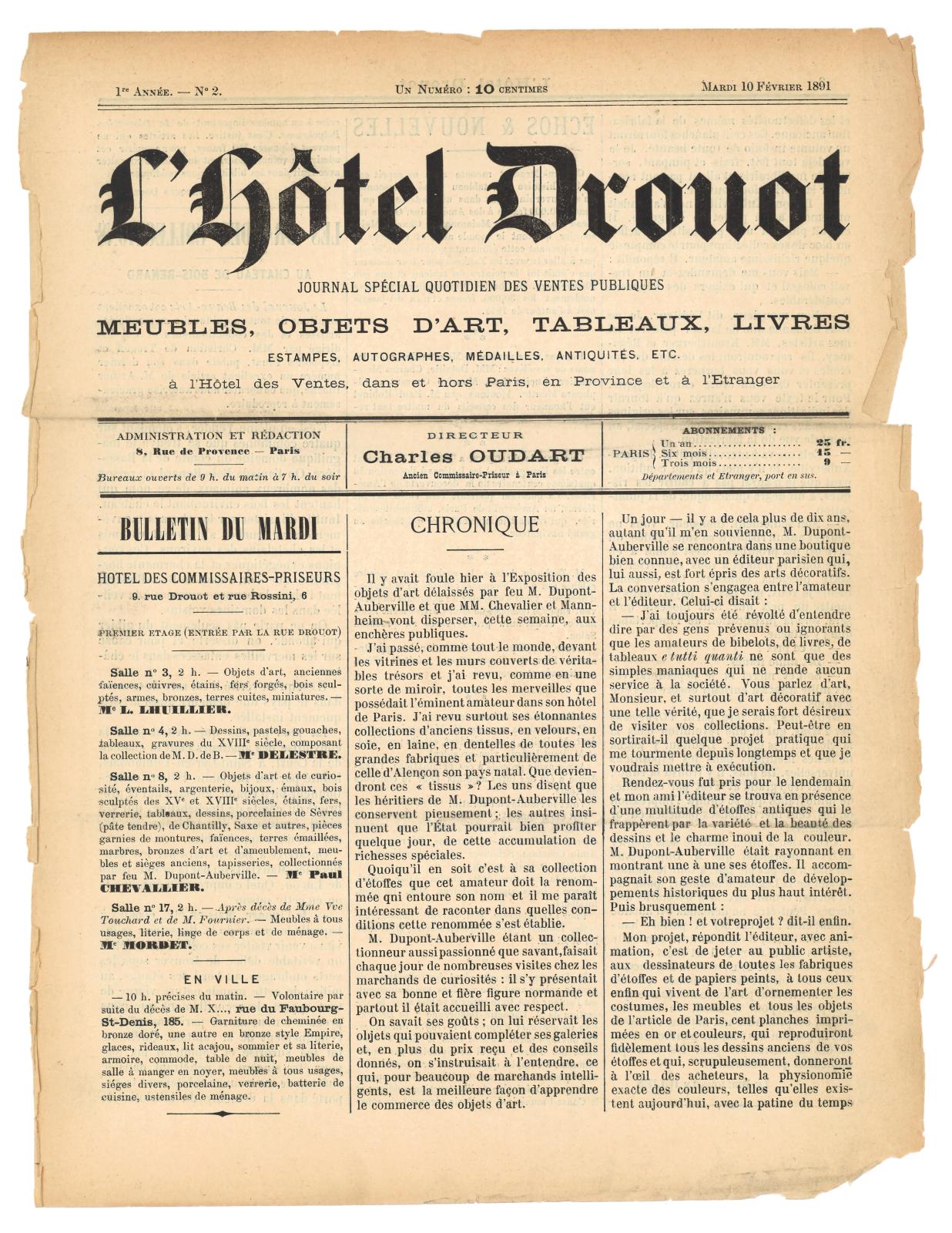 The first issue entitled Gazette de l'hôtel Drouot was published on Tuesday, February 24, 1891. On its cover, reproduced today on the back of the magazine, we see the number "14"—not "1". A mistake? Not at all! The "Special daily magazine of public sales" was actually first published on Sunday, February 8 and Monday, February 9, 1891, under the title L'Hôtel Drouot. The reason for the change was clearly stated: "Through long use, this title of the Hôtel Drouot has become the property of the establishment belonging to the gentlemen auctioneers of Paris [...] We soon realized that the administration of the Hôtel Drouot magazine could be mistaken for that of the real Hôtel Drouot, for example, and we wished to avoid this confusion." Strangely, the name of the owner (and thus founder) of this new daily did not feature in the publication. The only person mentioned was the director, Charles Oudart: an auctioneer who remained in charge until 1900. This omission explains why the Bibliotheque National de France (French National Library) credits him with creating the title. So who really founded La Gazette? The centennial issue published on February 22, 1991 and an exhibition organized for the occasion at the 9th arrondissement town hall provided the answer: Pierre Auguste Fernand Fau.

The Younger Sibling of the Moniteur des ventes
Fau was best known as an illustrator and cartoonist, having worked for Le Rire and Le Chat Noir. But he had also been the manager and owner of Le Moniteur des ventes (The Sales Monitor) since 1869, after the death of his father, the founder in 1831 of Gratis, which later became Le Moniteur des ventes. Although his name was printed on the last page of this periodical, he was never mentioned in La Gazette. The layout of the first issues of La Gazette was very obviously based on Le Moniteur des ventes. The two titles are still linked today and form Auctionspress, one of the subsidiaries of Drouot Patrimoine. But at the time, each publication already had its particular hunting ground: legal auctions carried out by auctioneers and bailiffs with Le Moniteur, and voluntary sales with La Gazette. As we know, advertising was a legal obligation for the holding of public auctions. And in 1891, La Gazette was not an original creation. It competed with Le Journal des arts, founded in 1879 by Auguste Dalligny, who protested vehemently in the issue of February 24, 1891: "We would remind those of our colleagues who believe they can take our List of exhibitions and sales at the Hôtel Drouot from us that this list is the personal work of Le Journal des arts and that we intend to retain exclusive ownership of it." This magazine only survived a short time after the death of its founder in 1919.

What did La Gazette offer in comparison with its main competitor? First of all, its price: it was cheap, as explicitly emphasized in the program presented in the first issue. But it was also intended to be as comprehensive as possible, as it was designed "to provide a real service to all those who wish to be kept informed, day by day and hour by hour, as it were, about the goods, artworks, books, paintings and prints that are constantly disseminated in sales supervised by public officers assigned to the matter by law."

Announcements and Results
Though its title seemed to restrict it to the Hôtel Drouot alone, it established a far wider geographical scope from its very first issues, encompassing the regions of France and even territories beyond it. Likewise, from the outset, auctions—announcements and results—were not the only subjects covered. La Gazette was also an informative magazine containing columns designed to broaden its readership's artistic knowledge. Not only that: depending on the period, there were columns as wide-ranging as "Echoes and News", "Theaters", "Sport", "Entertainment Program", "Classified ads" and the "Financial Bulletin". The famous "Program" of the first issue stated: "And, as in all things, we must consider 'the fairest half of the human race', so we reserve for our female audience theatrical correspondence and news items for the ladies to read while their husbands attend the peaceable and lucrative battles of the Hôtel Drouot." Later, women played an active role in auctions, taking possession of the hammer and actively participating "in the peaceable and lucrative battles" of the bidding.

Charles Oudart ran La Gazette until 1900, and then devoted himself to his work as a public officer. His name thus appears in 1921 in the context of the famous affair of the French serial killer Landru, when he sold this Bluebeard's furniture, obtaining 1,614 francs for "a real hodgepodge that in other circumstances would have fetched barely 300 francs," according to La Gazette at the time. While he was in charge of the publication, Oudart also took up his pen to write articles, as did his successor, Alexandre Frappart. The latter held the record for longevity, joining La Gazette in 1892 and only leaving in 1954! Until 1896, the magazine was published every day. Then it began to appear three times a week, on Tuesdays, Thursdays and Saturdays. Another new feature in 1896 was the appearance of an engraving on the front page, with a short article describing it. At that time, it was rarely connected with a sale. La Gazette already contained illustrations, but only on the inside pages, notably for the column "The Science of Coats of Arms". The publication became a weekly at the start of the Second World War, with the number of pages varying from two to ten or a little more.

1968: A Turning Point
But it wasn't until the 1960s that La Gazette took on its present form, with up to 400 pages per issue, all richly illustrated. In 1968, the editorial staff announced a "facelift"— because the magazine had now been bought by the Compagnie Parisienne des Commissaires-priseurs (Paris auctioneers' company). It was headed by Jacques Boussac, the publication's charismatic general manager, who later became its chairman and CEO. He retired in 1998, but remained at the helm until 2002, when La Gazette was completely decked out in color. Prior to that, he had been a journalist and editor-in-chief of the cultural magazine Arts. La Gazette expanded by opening up to regional sales, increasing the number of articles and extending its circulation to a wider audience. On September 10, 1971, in a boxed article entitled "A New Gazette", after stating a major change of form—La Gazette was henceforth stapled—and listing all the sections, the team concluded that La Gazette had now become a real "review."

The following decades saw the publication grow thicker; it now required large bindings to hold its 44 or 45 issues, depending on the year. In 2002, it became a subsidiary of Drouot Patrimoine, a holding company created during the legal changes brought about by the reform of the auctioneer's profession in July 2000. Before that, it had succeeded in going digital, taking to the Internet in 1996. Since 2005, it has been managed by Olivier Lange, who in 2015 introduced the current version, now refocused on auctions, the art market and all the cultural news surrounding it. 130 years after its creation, its sales diary remains its DNA—to be found in these pages or on the web!