Compton Verney’s new exhibition "Cranach: Artist and Innovator" is an exploration of his profound influence on contemporary artists today. 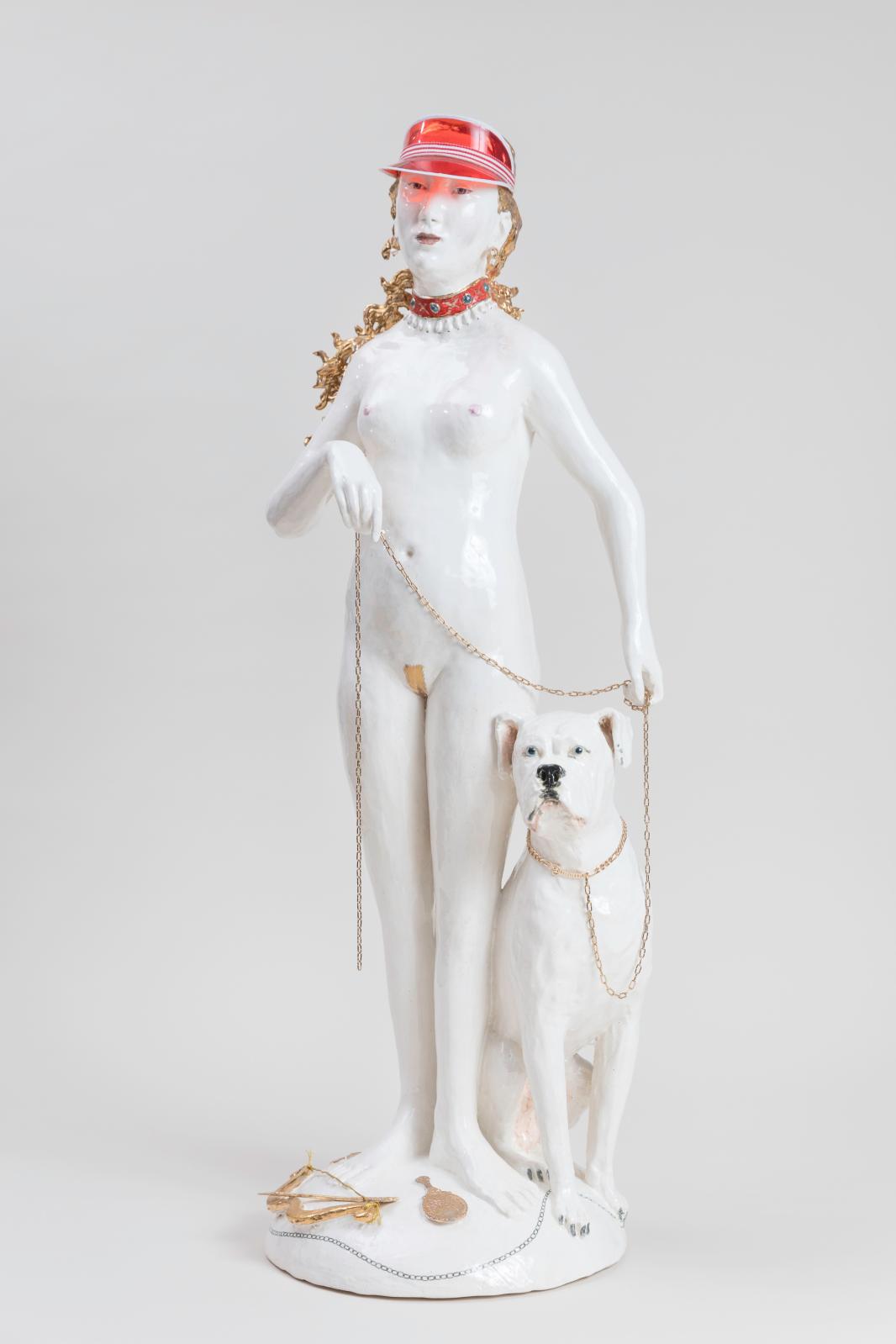 “Master Lucas is a crude painter. He could have been less hard on the female sex both because they are God’s creatures and because they are our mothers. He should at the same time have painted the Pope in a more worthy, I mean more devilish, guise.” (Martin Luther)

The German Renaissance painter and printmaker Lucas Cranach the Elder (1472-1533) was a close friend and ardent supporter of Martin Luther (1483-1546), the leading figure of the Reformation, yet the theologian did not appear to reciprocate in his own appreciation for the artist’s work. Cranach’s paintings and prints are on view for visitors to make their own judgement at Compton Verney Art Gallery and Park, near Stratford-upon-Avon in Warwickshire. Four paintings from the Compton Verney collection are the basis of the exhibition, with generous loans sourced from UK institutions, including the Queen’s Collection and the National Gallery in London. With only thirteen paintings by Cranach and a handful of prints the exhibition is hardly a retrospective, but it provides a whistle-stop tour of the artist’s career and sets out to demonstrate his profound influence on contemporary artists today.

Cranach’s Life at Court
The exhibition is organised thematically, with the first room dedicated to Cranach’s life at court in the service of the Electors. The artist spent almost 50 years as court painter to the Electors of Saxony (leaders of the state of the Holy Roman Empire) and it was Frederick the Wise (1486-1525), who awarded him with his coat of arms: the serpent with bat wings and a ruby ring in its mouth, which became the artist’s emblematic signature. Small delicate paintings with jewel-like tones are hung against deep red walls, evoking the feeling of the interior of a jewellery box. A spectacular Portrait Diptych (1509) of John the Steadfast I and his son John Frederik I, stands out with the colour scheme in the two portraits reversed. The father wears a black outfit against a green background, and his son is dressed in an ornate green cloth against a black background. This small diptych is unusual as this format was traditionally used for a married couple, however John the Steadfast’s wife had died of childbirth, therefore, her son replaced her.

Wittenberg and the Protestant Reformation
The second room reveals Cranach’s vital role in Wittenberg and the promotion of Martin Luther’s Protestant Reformation. It was here that he supervised a workshop of 10 assistants and established a thriving publishing business with Christian Döring (c. 1480-1533). This printing press was pivotal in the dissemination of Martin Luther’s texts, which Cranach embellished with woodcut illustrations. Manuscripts are shown in glass vitrines evenly spaced out, allowing close examination of the woodcuts Cranach created to illustrate Luther’s Das Neue Testament Deutsch. The woodcut of the Apocalypse scenes was strongly inspired by Albrecht Dürer’s own series (published in 1498). Cranach has copied Dürer’s imagery and composition exactly but his handling of anatomy is less convincingly real. The strongly pro-Protestant Passional Christi und Antichristi is striking with images designed by Cranach enlarged on back-lit panels, showing Jesus Christ controversially contrasted with Pope Julius II as the Antichrist.

Cranach and the Female Nude
It would be remiss for an exhibition of Cranach’s work to not include a section dedicated to his distinctive treatment of the female nude, and room three fulfils this requirement. Drawing on Dürer’s engravings, Cranach created his wispy pale elongated female nude, which rejected classical proportions popular at the time. Due to the rising popularity of mythological subject matter, he started to paint the female nude for his wealthy patrons at court in the 1520s, employing the characters of Venus, Eve and Diana frequently. These paintings of the female nude are instantly recognisable, employing a formulaic approach with his idealised figure set against a dark background in nature. The artist and his studio produced multiple variants of the same theme, there are at least 27 paintings of Venus and Cupid extant today. In keeping with his strong support of Martin Luther, the paintings each have moralistic messages, which highlight the sin in their contemplation. However, the moralising messages do not negate the eroticism that Cranach intended: his nudes are adorned with fashionable hats, veils and jewellery, which draw attention to their nakedness. The enduring romantic quality of these paintings is demonstrated by Prince Albert’s gift in 1844 of a delicate Apollo and Diana to Queen Victoria.

The Cranach Legacy
The final room is dedicated to Cranach’s legacy and influence on modern and contemporary art. There is quite a considerable jump to Pablo Picasso in terms of chronology, and the transition is not very smooth, especially since the wall text refers to the increased availability of Cranach’s work in books and postcards from the nineteenth century onwards. However, there is a beautiful lithograph by Picasso from the Bhandari Collection, showing an idealised Venus and Cupid, where Picasso exaggerates the elongated female nude of Cranach’s paintings. From Picasso the curators skip straight to John Currin's Honeymoon Nude (1998), in which Currin adopts Cranach’s ‘formula’ with his fairy-like sensuous female nude, rejecting natural proportions. It was refreshing to see the inclusion of the Indian-British artist Raqib Shaw, who created Reflections on a Journey without a Compass after Cranach (2019-2020) in response to Cranach’s Lot and His Daughters (c.1530) in the Compton Verney Collection for this exhibition. Adopting the same composition and colour scheme, Shaw casts himself as Lot surrounded by images of today’s disasters: the citizens fleeing Sodom are now refugees, and the wooded landscape from Cranach’s painting is suffering deforestation.
Disappointingly Michael Landy’s St Apollonia had broken after an extended exhibition run. The giant fibreglass sculpture also revealed a missed opportunity to include Cranach’s St Genevieve and Apollonia from the National Gallery, from which Landy had directly copied.
The exhibition ends with a very witty take on Cranach’s nudes in the ceramic sculptures of Claire Partington, showing Venus wearing a red perspex visor, and Judith (from Judith and Holofernes) with her foot on Cranach’s head, inverting the male gaze of the artist. A fitting end to an exhibition that demonstrates Cranach’s continued relevance today, Partington directly addresses the problematic nature of Cranach’s treatment of the female nude and the misogyny in his pairing of the subject with the notion of sin. A criticism that even Luther found in Cranach’s work.

"Cranach: Artist and Innovator" is part of Compton Verney’s programme dedicated to combining historic and contemporary art. However, the shift between the historic Cranach works and the contemporary response was quite abrupt. Nonetheless, the exhibition is a wonderful opportunity to see a selection of works by the artist in one place and to discover new connections between the German Renaissance painter and British contemporary artists.

Compton Verney is a spectacular manor house and park with a rich history. The magnificent piece of neoclassical architecture sits in the seamless landscape crafted by ‘Capability’ Brown (1716-1783), the famed English landscape artist. The estate was founded in 1150 by Robert Murdak and transformed from a Tudor manor into a Baroque piece of architecture in 1711 by the 12th Baron Willoughby de Broke. In 1768, ‘Capability’ Brown and Scottish neoclassical architect Robert Adam (1728-1792) were commissioned by the 14th Baron to completely remodel the house and its surroundings. The formal gardens were replaced with grassland and thousands of trees.
The Verney family owned the estate from 1442 until 1921 when it was sold due to financial pressures. In the early 20th century the house was neglected and finally abandoned in 1945. During World War II, the estate was requisitioned by the army, and used as an experimental station for smokescreen camouflage, during which time the buildings and sculptural decoration sustained much damage. Left derelict after the war the house fell into complete ruin. In 1993 businessman, art collector and philanthropist Sir Peter Moores (1932-2016) bought the estate transforming it into a Modern Art Gallery and Park for the nation and donated four of the permanent art collections to the gallery. Between 2015 and 2016, the house and park were restored to their former glory for the public to enjoy.
“Cranach: Artist and Innovator”, Compton Verney Art Gallery and Park, Warwickshire (UK).
From 14 March 2020 to 3 January 2021.
www.comptonverney.org.uk/

Art Market Overview: Julie Mehretu is Back
Newsfeed
See all news
Swiss Photographer Arnold Odermatt Has Passed Away
New Appointments at Centre Pompidou’s Brussels Outpost Marred by Accusations of Sexism
Nepotism Accusations in South Korea After Resident’s Son Receives Art Grant
AirBnB Offers the Chance to Stay a Night in Gaudí’s Casa Vicens for Just €1
Not to be missed
Exhibitions
Augustin Rouart: Painting as Legacy at the Petit Pal…
The small-scale but dense exhibition devoted to "magic realist"…
Exhibitions
The Musée Cognacq-Jay Explores the Senses in the 18t…
This season, the Musée Cognacq-Jay, Paris, is focusing on the empire…
Exhibitions
The Torlonia Collection’s Marbles Unveiled in Rome
This large private collection of marbles from antiquity amassed…
Exhibitions
The Swiss Exception at the Musée d’Orsay
Does Swiss art exist? The Musée d’Orsay set out to answer the question…