Zuber: The Art of Wallpaper

1790: the golden age of wallpaper. The Zuber factory strives to preserve a heritage that it brings to life through its collection of 150,000 printing blocks, classified as historic monuments. 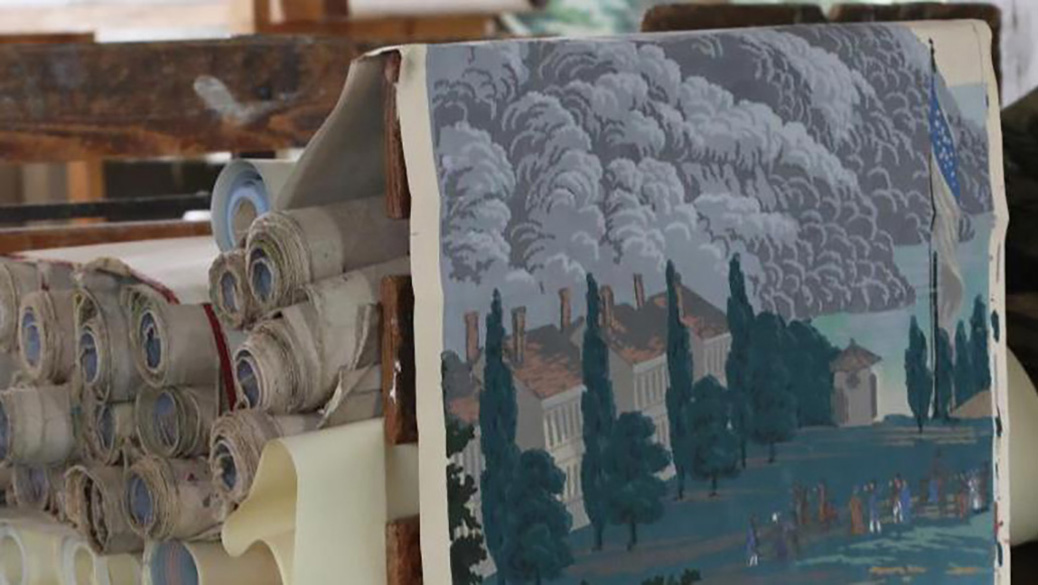 The Zuber factory near Mulhouse, housed in the same building since 1797, plays a double role. One is historical, as it is the oldest wallpaper factory still active (its carved wood printing blocks are classified as historic monuments); the other is economic, as it is a flourishing company achieving 80% of its turnover through exports. This duality is embodied in the layout of its main buildings: on one side the Wallpaper Museum, whose lofts hold the 130,000 decorative pattern designs created since the company was founded, which still provide raw material for the company's production and inspiration; on the other, the workshops where craftspeople work with the carved wood blocks every day. Two worlds that seem diametrically opposed, since conservation with its stringent heritage regulations is incompatible with use and handing. Here the meaning of the term "living heritage" can be fully appreciated.

In its original condition
The walls of the ground floor offices are covered with the panoramic wallpapers that made the company famous since 1804: monumental landscapes with captivating titles like Isola Bella, Eldorado, Earthly Zones, Hindustan and Alhambra. Jean Zuber (1773-1852), who at the age of 17 entered the company founded by his father, called on artists like Pierre Mongin, who "designed seven sets including the Views of Switzerland. Craftsmen had to interpret these paintings, transposing the motifs onto carved wooden blocks and breaking down the various colours into the order in which they would be printed. "The number of blocks to be carved had to be reduced to a minimum," says the company's CEO, Guillaume Tregouet. For example, the "Eldorado" panoramic, divided into 24 lengths, needs 1,554 blocks and 210 colours, whereas "The American War of Independence" requires 32 lengths, 2,300 blocks and 360 colours. It takes between five months and a year to print a panoramic wallpaper. Given the complexity of the task, the workshop produces twenty-odd copies in series that are then stored, rather than single units (the cost varies between €500 and €1,000 per length). The company's trademark is the gradation of the background, which can be found in all the compositions, except for the Décor chinois. A vibrant iridescence is obtained by applying seven shades ranging from blue to yellow. The technique, developed in 1819, needs four people working on it at the same time, and this stage can involve craftsmen for two solid weeks. The theatre of operations then moves to the workshop, where block printing is carried out as in 1797: the printing tanks containing the paint are identical, and the wallpaper lengths are hung up like thick curtains. You get the same sense of travelling back in time when you visit the cellars, where the 150,000 blocks are arranged in a precise order that only the craftsmen can understand. The hygrometry and temperature conditions have naturally been maintained at a stable level since the 18th century, as the worst thing that could happen is for the wood to split and become unusable. Here only the strip lighting and good lifts betray the passing of time. "Just imagine: in Jean Zuber's day, the workers had to carry these blocks up the narrow spiral staircase," says Guillaume Tregouet. Once they have been brought up, they are sorted by length: a preparatory phase that takes a week. The craftsmen work with intense concentration in silence, repeating the traditional gestures. Once the length is laid out on a work surface, each block, corresponding to one part of the design, is dipped in the tank before being locked up on the length then pressed onto the paper. The mixture must be extremely consistent to prevent variations between the lengths as far as possible: only a specialist can spot the inevitable differences. As you would expect, this expertise incorporates an eco-responsible approach: water-based paint and paper produced especially for the company, sourced from sustainably managed forests. But innovation is also part of the Zuber approach. So while antique patterns are much in demand, the workshop is also breaking new ground. "Taking inspiration from the embossing technique, we have transposed this know-how onto fabrics," says the director. "We also adapt a great deal to interior designers' requirements. Recently, a client was renovating a Haussmann apartment, and wanted wall covering that imitated leather with silver highlights. People know us for our panoramic wallpapers, but this other side, involving the design of innovative coverings, is also intrinsic to our identity."