Women Painters at the Turn of the 19th century: A Decisive Step Towards Recognition

After struggling to exist as artists, women painters of the turn of the 19th century have begun to set records. This is not revenge, but well-deserved recognition. 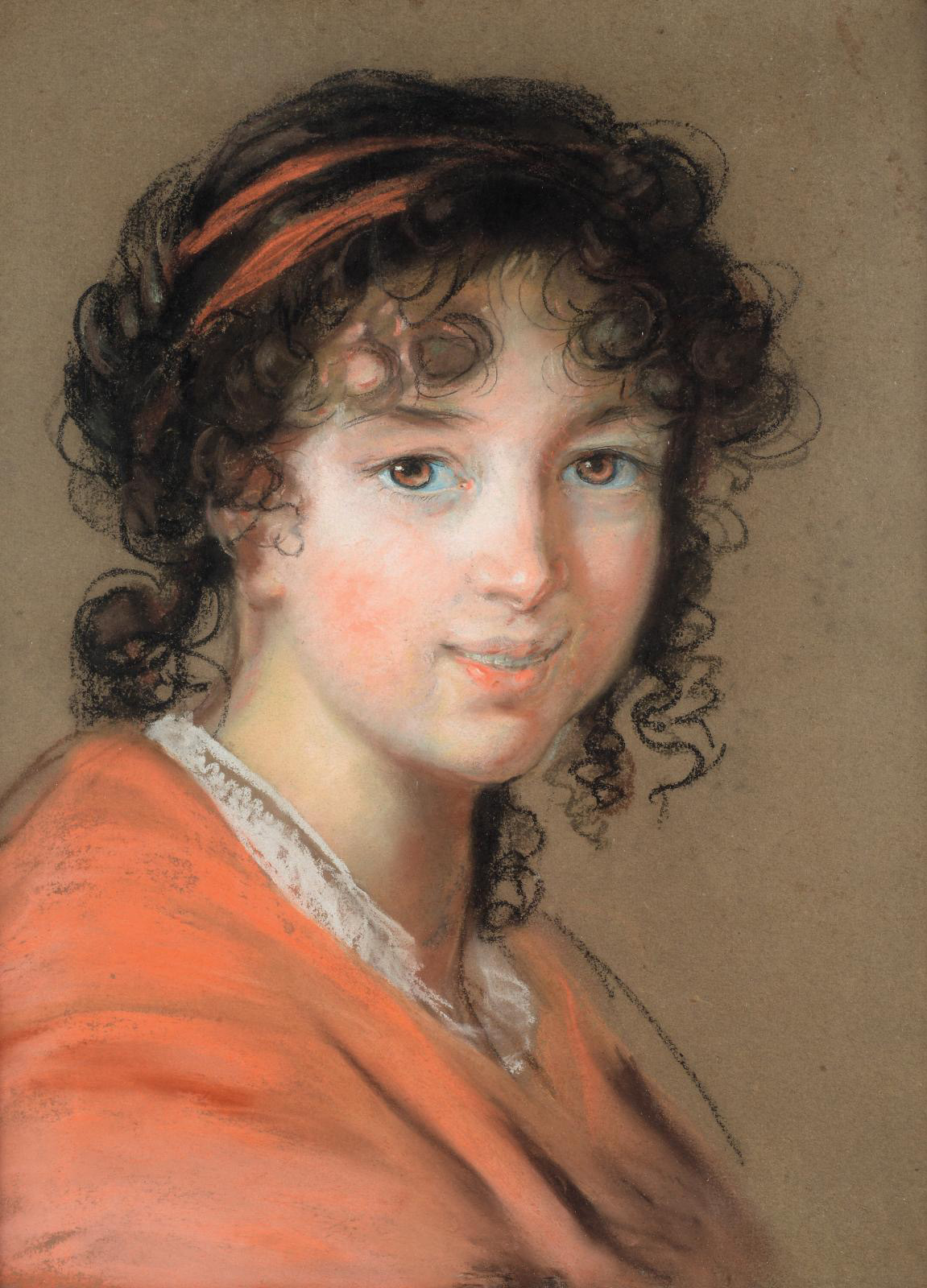 We only need to recall the difficulties women artists had in gaining acceptance to the Académie and participating in the Salons of the final years of the aptly named Ancien Régime (Old Regime, the Kingdom of France before 1789) to appreciate how far they have come in a short time. The French Revolution certainly played its part, liberating them and enabling them to exercise their art and tackle other subjects than genre scenes and portraits of children or charming young folk. For some time now, more of their works have been appearing on the market—and not only those of the most prominent, led by Élisabeth Vigée-Lebrun (1755-1842). Art historians have done a fine job: many names have now emerged from unjust obscurity and are displayed for all to see, with prices to match. They provide consummate proof of how much women contributed to the fine arts—and even more to the burgeoning changes in French society as a whole— between 1780 and 1830. The Musée du Luxembourg in Paris is highlighting many of them this spring. The exhibition "Peintres femmes, 1780-1830 – Naissance d’un combat" ("Women Painters, 1780-1830: Birth of a combat") was due to open on March 3, but a little patience is still needed: a virtue these "revolutionaries" learned to cultivate!

The Forerunners
The first woman admitted to the Académie Royale de Peinture et de Sculpture was Catherine Duchemin (1630-1698) in 1663. At this time, the royal power was keen "to spread its graces irrespective of gender", but a woman still needed to be the sister, daughter or wife of an academician. This particular chosen one had married the sculptor Girardon in 1657. Only fourteen women joined the learned assembly during the entire Ancien Régime. In 1791, the painter Jacques-Louis David (1748-1825), a forward thinker in many respects, launched a petition to open the Académie's Salon to everyone. The "Salon de la Liberté" was in a way his achievement: for the first time, the Louvre's walls were available to every painter, sculptor and engraver, regardless of age, status, nationality or sex.

Adélaïde Labille-Guiard (1749-1803), Anne Vallayer-Coster (1744-1818), and Élisabeth Vigée-Lebrun (1755-1842) were pioneers and modern women who, in addition to working as completely independent painters, decided to add their maiden names to those of their husbands. Labille-Guiard in fact filed for divorce as soon as the law authorizing it was passed by the new Republic in September 1792. Was it out of recognition or out of adherence to revolutionary theories? In 1794, she painted the Portrait Presumed to be of Marie-Jean Hérault de Séchelles, shortly before the execution of this member of the National Convention, the regime governing France from 1792 to 1795. [He made the mistake—among others—of secretly negotiating with the Austrians for the liberation of Marie-Antoinette —Ed.] Presented by Osenat in Fontainebleau in December 2020, the portrait fetched €51,250.

Élizabeth Vigée-Lebrun, too close to the royal family and Marie-Antoinette —whose features she painted on several occasions in various circumstances—wisely decided to flee France. On November 15, 2013, Audap Mirabaud sold the Portrait of Aglaé de Gramont, née de Polignac, Duchesse de Guiche (1768-1803), a painting she produced in 1794 during her stay in Vienna, for €437,906. The daughter of a famous pastellist (who also taught her), she used this delicate technique throughout her life. The powdered pigment sticks were excellent for not only rapid sketches for a painting from life, but also accomplished portraits, as witnessed by the one sold in March 2018 by Thierry de Maigret. In 1892, this pastel had been offered for sale as the presumed portrait of her daughter, Julie Le Brun. But it seems—as indicated on a label on the back—that it could well be the portrait of her niece, Charlotte Jeanne Elisabeth Louise, aka Caroline Vigée (1791-1864). Whoever the model may be, this is a masterful, spirited drawing with a liberated touch that heralds the most appealing pastels of the 19th century, and collectors made no mistake in offering €264,440 for it.

These three names should be joined by that of Marguerite Gérard (1761-1837), now restored to the limelight by Carole Blumenfeld's award-winning book (Gourcuff, 2019). This close relative of Fragonard, who turns up rarely in sales, decided not to marry or seek membership of the Académie, and to concentrate on genre scenes. The considerable commercial success she achieved during her lifetime was due to her talent alone.

A Clear Path
Adèle Romany, also known as Adèle Romanée or Adèle de Romance (1769-1846), as the natural daughter of Marquis Godefroy de Romance, belonged to the generation of young women who were emancipated by the French Revolution and could practice their art without asking permission. A pupil of Jean-Baptiste Regnault (1754-1829), she retained her teacher's precise manner and sure line, but further explored his subtle rendering of materials, especially fabrics, and proved truly brilliant in this respect. Little by little, her art gained maturity, and she developed a sensibility that moved towards Romanticism. Aware of the importance of Salons, she exhibited in them continuously from 1793 to 1833, with an impressive eighty-plus works. They included a few history paintings and genre scenes, but were mostly portraits. She excelled in these, as witness the one of Miss Gillet Ducoudrey: a most appealing character, whose talent for music on top of a pretty figure unsurprisingly garnered subject and artist €41,800 on October 2, 2020 with Villanfray & Associés. Meanwhile, the Comédie-Française actor Pierre-Marie-Nicolas Michelot, aka Théodore Michelot (1786-1856), posing with the text of Racine's Phèdre (a tragedy in which he triumphed in 1805), received decided acclaim at €62,500 with Thierry de Maigret on December 8, 2017.

Mademoiselle Marie-Guillemine de Laville-Leroux (1768-1826), better known by her married name, Benoist, was brimful of both talent and daring. The young woman tackled a historical subject with considerable aplomb and presented it at the Salon of 1791. The great David was right to believe in her, admitting her to his studio in 1786 after she left that of Élisabeth Vigée-Lebrun. Many a mentor have done worse by their protegés! The rediscovered Les Adieux de Psyché à sa famille, which had disappeared shortly after being exhibited in 1791, landed €362,080, setting a world record, on July 4, 2020 with Vasari Auction. Though it is a well-known fact, it is still worth stressing that she was the artist who executed and presented in 1800 the magnificent Portrait of a Black Woman, renamed Portrait of Madeleine since the Musée d'Orsay's exhibition on "The Black Model". Her maid, with all the beauty of a modern Mona Lisa, triumphed over conventions regarding the role imposed on women. And yet Benoist had to give up her art because of her husband's position as a high-ranking civil servant. She lamented: "So much study, so much effort, a life of relentless work, and after years of ordeal, success at last! And then suddenly all this is seen as shameful! I found it hard to accept. But it's all right, let's not talk about it anymore; I've become reasonable..." It would be misleading to think that everything had become simple, especially with Napoleon's seizure of power and the return of the Bourbons.

Creative Sisters
Meanwhile, the story of the Lemoine sisters is very encouraging. The sale by De Baecque & Associates on March 27, 2019 was a great surprise, which provided an opportunity to look back at their careers. That of Marie-Victoire (1754-1820), a pupil of Vigée-Lebrun, and her Intérieur d’Attelier (sic) (Studio Interior) of a woman painter, a dazzling tribute to her teacher, is more familiar. This is now incidentally in the collections of the Metropolitan Museum, as Joseph Baillio was the first to take an interest in her in 1996. Marie-Élisabeth (1761-1811) was somewhat overshadowed by her sister, and there was a tendency to attribute the younger woman's works to the elder. In this sale, both she and her Portrait de petit garçon avec une charrette de jeux, jouant à faire des bulles (Portrait of a Boy with a Toy Cart Blowing Bubbles) were given their due when she received €83,820, setting her own world record.

Many more names should be added to this august assembly, like those of Constance Mayer (1774-1821), a pupil and then close collaborator of Pierre Paul Prud'hon—to whom her works are still too often attributed—and Jeanne-Élisabeth Chaudet (1761-1832). A version of the latter's Petite fille voulant apprendre à lire à son chien (Little Girl Trying to Teach Her Dog to Read) was sold for €55,000 on November 12, 2015, at a collegiate sale of Old Masters at Drouot. This is a story with endless feminine facets.

Worth Seeing
"Female Painters, 1780-1830 - Birth of a Combat", Musée du Luxembourg, Paris VIe.
As soon as the health situation allows, until July 4.
www.museeduluxembourg.fr

In the Footsteps of Rosa Bonheur and Photography

New York has surprised the art market by ditching the few rules that...