At 33, Mathieu Templon joined his father's company (based in Paris) by taking over the Brussels branch. Although son and father may not always agree (a matter of style and generation), they invest the same energy in keeping their 53-year-old ship afloat and on course. 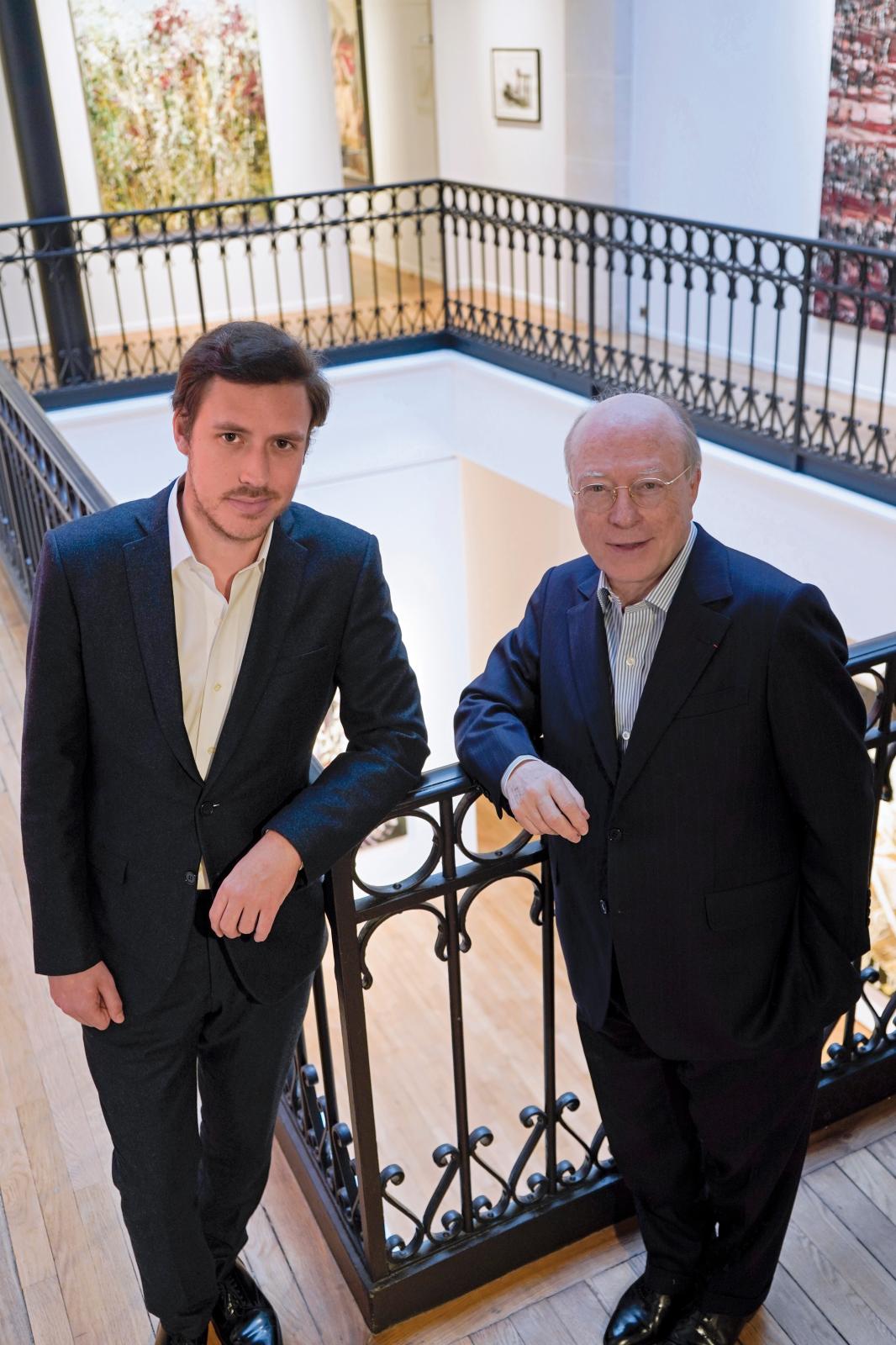 Daniel Templon, you say you dislike the term "galeriste" in French (gallery owner), and "dealer" still more. So what is your profession, exactly?
Daniel Templon. Did I say that? (laughs). Actually, both terms suit me perfectly. When I started out, we only talked about "dealers". Then the use of "gallery owners" became widespread; it sounds more contemporary and highlights the activity of presenting works with a commercial aspect. But we are art dealers above all. The gallery is not a museum. Our job is to exhibit works with the aim of selling them. This is what artists need.
Mathieu Templon. I would just say that being dealers is only a part of our work. It is important, of course, but I feel the term “galeriste” (gallery owner) is more representative of what the job is today, which includes the organisation of exhibitions, logistics and relations with institutions alike. We also promote young artists, which is highly important.

Your gallery has at one point been criticised for being too commercial...
D.T. A gallery that is not commercial is doomed to become marginalised or even go under, and a good artist is one who sells pretty well, but for whom we find buyers. It's elementary! In France, making money is often frowned upon, while elsewhere it is a sign of success. For years, we were told not to show figurative painting because it was too commercial. But abstract painting has always sold much better, even if things are changing. The Centre Pompidou in Paris and the FRACs (regional contemporary art funds – Ed.) have tended to subscribe to the idea that pictorial work is regressive and fosters so-called artistic "DIY". All this is being challenged. Just look at any fair: 15 years ago, a stand showed 30% of paintings on average. Today, its more like 70% or 80%. What I want is equal recognition for all means of expression.

So the Templons, father and son, both defend painting?
D.T. Painting is the most sophisticated mode of expression – as witness the fact that what draws crowds to exhibitions in droves is above all Bacon, Freud and Hockney. Art is know-how, first and foremost.

Do you fear the arrival of foreign galleries in Paris?
M.T. If they are moving to France, it's largely because of Brexit, because they will no longer have the same ease of access to the European market. But though London is a city of transition, Paris is less so. And the collector base can't be extended. Opening a gallery here may not be as simple as they think when they arrive.

Are you alluding to export certificates, where one of the clearly stated goals of the Comité Professionnel des Galeries d'Art (French Art Dealers Committee) is to speed up the time it takes to obtain one?
D.T. Certificates are a key issue. I hope that the committee will be able to obtain more flexibility. VAT on the sale of artworks, which is 5.5%, is the most favourable rate in Europe. We have advantages. It is more of a mindset issue. France suffers from a bad image because of the social climate. And even though the wealth tax was half-abolished by President Macron, there is still the fear that it could be reinstated in the next term. It's not a personal complaint: the gallery is doing well. What saddens me is that France does not command the position it deserves in the world. Our artists and dealers are just as good as the others, but given our value, French sales remain low.

Mathieu Templon, you run the gallery in Brussels, dubbed the capital of European contemporary art by the Washington Post. What is the actual situation in the field?
M.T. The political situation in Belgium is no rosier than in France! But the Belgians have learned to function without worrying about it. In Brussels, the contemporary art market is maybe healthier because the lack of large institutions means that cultural life is mainly kept going by private players. Belgian and especially Flemish collectors are very active. They have been supporting their national creation for centuries. We are talking about the highest density of collectors in the world.

Young artists have now joined your gallery. Are you in charge of prospecting, Mathieu?
M.T. Not entirely. Let's just say that Belgian collectors are a little less conservative than the French. So the Brussels gallery is an ideal place to present an artist closer to my generation each year. Daniel has brought in Kehinde Wiley, Jitish Kallat, Chiharu Shiota, Atul Dodiya and Norbert Bisky. Since my arrival, I have helped to swell the ranks with Omar Ba, Prune Nourry and Billie Zangewa, who chose Paris for her first exhibition in March.

In your galleries, we find ever more artists from not only Asia and Africa but also India. Does that indicate the gallery's future direction?
D.T. More than anything, we love unearthing talents, whatever their nationalities or trends. We have four Indian artists because the art scene there seems very promising to us, even if the country is only opening up very slowly to contemporary art.
M.T. It's our encounters with the works that fire us. I have been following Billie Zangewa's work for years. We discovered Omar Ba in an exhibition I organised in Brussels on Africa's influence in contemporary art. We preferred to stage a solo show for him in Cape Town rather than 1.54 in Marrakesh, because it is not a niche fair dedicated to the African scene but an international fair organised in Africa. We thought it would be appropriate to show a Western artist in a country that is mainly interested in ones from the South.

“What saddens me is that France does not command the position it deserves in the world. Our artists and dealers are just as good as the others, but given our value, French sales remain low.”

You won't be returning to Cape Town next year and didn't participate in Paris Photo in 2019... What is your strategy as regards fairs?
M.T. We take part in 12 fairs a year on average. We have to concentrate on a few, so we can't afford to do Cape Town twice in a row. But maybe in the future, in parallel with an institutional exhibition. Meanwhile, Paris Photo was held at the same time as the Shanghai Fair, but we will be there in 2020 with a solo show by Gregory Crewdson. Photography is no longer our priority, even though Daniel represented Mapplethorpe and Helmut Newton. We still exhibit it, but in a different way. All our photographers now specialise in staged photography, such as its key exponent, James Casebere.
D.T. Fairs cost us a vast amount, but they are a must. We have a lot of freedom in them, apart from a few recommendations from Art Basel, which encourages to make not only commercial choices but also aesthetic ones, which is no bad thing.

Daniel Templon, you were the first to exhibit major figures in Pop art and Minimal art in Paris. Isn't it frustrating to find them again today on the walls of your counterparts – at Thaddaeus Ropac, for instance?
D.T. No, competition is natural. And I've always favoured discovery. I imported the Americans to France at the end of 1970, and later on the Germans – Immendörf, for example – and the Italians of the Trans-avant-garde. That's the gallery's originality: finding something new, and I want to continue in that line. It doesn't prevent me from working with estates as well. This is the case with Jules Olitski and Georges Segal, one of the leading Pop artists, whom I presented with great success last year. But I far prefer adventure to repetition.

Which artists do you sell best?
M.T. Among the younger generations, Kehinde Wiley, Shiharu Shiota, Abdelkader Benchamma and Omar Ba have met with increasing recognition in recent years, as can be seen from the fact that every work they give us finds a buyer.

Daniel Templon, are you preparing to hand over?
D.T. I have a fascinating job where there's no reason to stop. Look at Sidney Janis, Leo Castelli, Ileana Sonnabend, Denise Renée, Pierre Matisse and now Marian Goodman: they all carried on after the age of 90. Experience makes one lucid.
M.T. And given the magnitude of the task, two is not too many! We share our human resources between the three galleries and I travel on behalf of both companies. We work with a single goal in view: the success of the Templon gallery.

The Templon
in key dates
1966
Daniel Templon opens his first gallery in a cellar on Rue Bonaparte.
1972
Opens the gallery on Rue Beaubourg and founds the review Art Press with Catherine Millet. Meets the gallery owner Leo Castelli in New York.
2015
Mathieu Templon takes over management of the Brussels branch after initial experience at the Sean Kelly Gallery in New York.
2018
Opening of a second Paris gallery in Rue Grenier Saint-Lazare (3rd arrondissement).