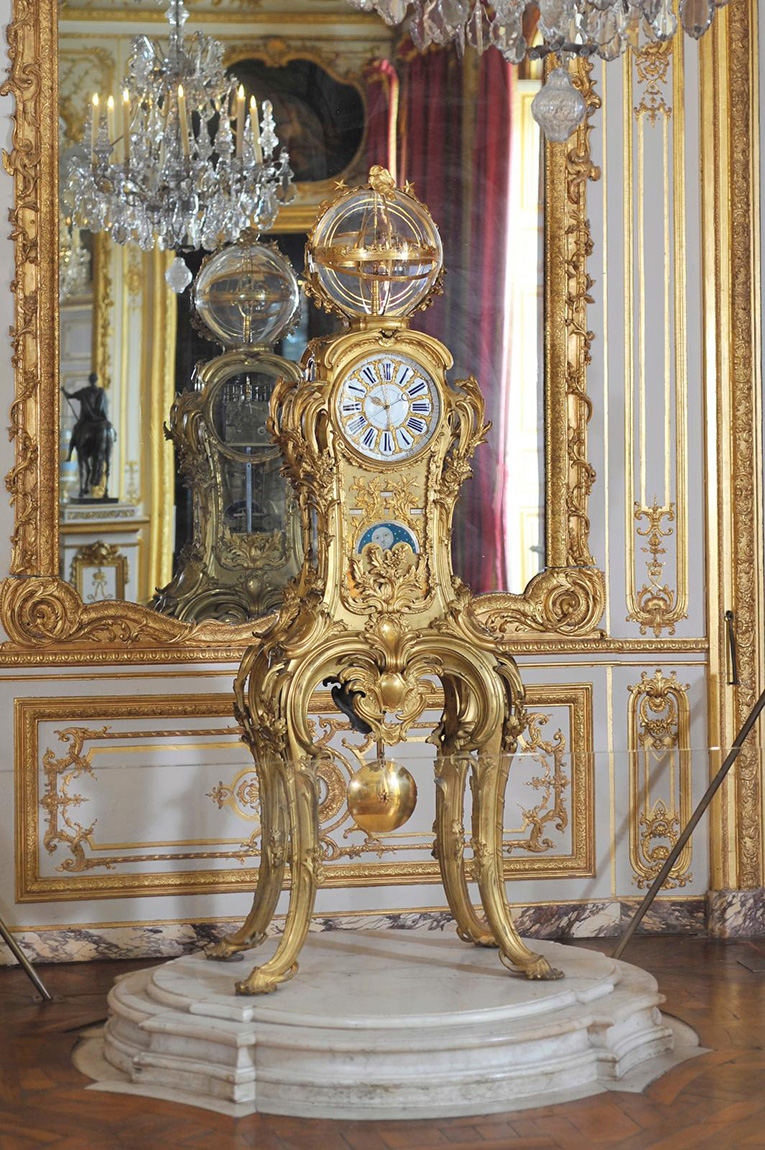 Painstakingly arranged and numbered circles and spheres—the insides of the crystal ball that ordinarily crowns Passemant’s clock at Versailles—are laid bare on a high table in a workshop at the Museums of France Research and Restoration Center (C2RMF, Centre de recherche et de restauration des musées de France) in the Louvre. They are the planets of the solar system and their orbits as imagined in the 18th century. “We took an X-ray to make it easier to take it apart,” says Ryma Hatahet, a cultural heritage restorer specializing in metal arts and head of the team of watchmakers working on the restoration. “The planetary system shows the day and night, equinoxes, solstices and even eclipses. This astronomical clock concentrates all the knowledge of the period. It shows the time and the date until 9999, taking account of leap years, features a lunar calendar and contains a huge amount of data.” In the workshop, watchmakers are busy with the clock’s axis, long pendulum and its two lead demi-spheres, cogs, the graceful face of the moon, the dial made up of 61 enameled parts and the dirt-encrusted chased bronze curved case in the rocaille style, which will be restored by the great bronze specialist Emmanuel Plé.

The Clock of Records
“The C2RMF is both a restoration workshop and a laboratory,” says Ms. Hatahet. “That means we can use cutting-edge technology like X-ray fluorescence, which will allow us to determine the composition of the materials, and therefore to date them and understand the previous restorations. We’ll be able to reconstruct the clock’s life and history as well as recommend restoration protocols to the scientific committee.” Funded by Rolex, the project will take two years before the chimes of Passemant’s clock, the only silent one in the Chateau of Versailles, can hopefully be heard again. Until late July, many hours of work will have already gone into dismantling, observing, documenting and cleaning. “We’ll be able to determine the tools used and the dates of the previous restorations by examining the parts with the naked eye, a magnifying glass and a digital microscope,” says clockmaker Jean-Baptiste Viot. “We’ll learn about how our forerunners worked. Beyond its artistic and technical value, this object has a transmission value.” Although well-known to art historians, the famous clock remains shrouded in mystery. Hélène Delalex, cultural heritage curator at Versailles and the Trianon, combed through the archives to find out more about this emblematic art object, which will open the upcoming Louis XV show that she is co-curating. “Cardinal de Fleury and the Regent gave Louis XV an education geared towards science,” she says. “He was enthralled and encouraged the development of optical instruments and clocks. The 18th century was an age of the discovery of the infinitely large and the infinitely small. Experiments were regarded as entertainment, such as when Abbé Nollet sent electric charges through a company of civil guards in front of the king at Versailles.” In this context of enthusiasm for science, Passemant (1702–1769), a merchant trained in mechanics, optics and astronomy, who also created automatons, began building an astronomical clock. It took him 12 years to design it, establishing his own astronomical tables, and eight more to make the sphere. Clockmaker Louis Dauthiau (1713–1769) also took 12 years to build the movement. The bronze bell chimes the hours, half-hours and, if desired, quarter-hours. The planetary sphere is connected by a single mechanism including 120 gears and pinions at the end of the pendulum, which ticks off the seconds. A plate in the Encyclopedia illustrated this feat. On August 23, 1749, the mechanism was presented to and approved by the French Academy of Sciences. The calculations were so accurate, the members said, that they would not differ one degree over thousands of years. On September 7, 1750, the Duc de Chaulnes presented the clock to Louis XV at Choisy. The captivated king bought the mechanism and asked sculptor Jacques Caffieri to design a bronze case to house it, which took several more years of work.

A National Treasure
On August 20, 1753, the mechanism was again presented to the French King, this time in a chased gilded bronze case whose four sides are faced with glass and a mirror allowing the inner workings to be seen. Two months later it was put in the Choisy Gallery before definitively ending up on a marble base in Versailles on January 15, 1754. “Perhaps it was behind a balustrade,” Hélène Delalex hypothesizes. “We don’t know. What we do know is that Louis XV and his family always watched it when the year changed. On December 31, 2000, the château’s staff also gathered around the clock: it went straight to the year 3000 and the clockmaker at the château had to push it back! Passemant’s clock is also said to have been used to set the time across the kingdom, but that’s an exaggeration. France remained on solar time until the first official railway timetable came out in 1884.” During the Revolution, the clock, considered a scientific object, was spared and safeguarded by Citizen Besnard, nephew of Louis Dauthiau and clockmaker of the Garde-Meuble. Deposited at the Conservatoire des arts et métiers on January 2, 1797, in April 1800 its restoration was entrusted to Antide Janvier, Louis XVI’s former clockmaker, who had also built an extraordinary astronomical pendulum clock. In 1809, Janvier went bankrupt and pawned the bronzes at the Mont-de-piété, the state-owned pawnbroker, brazenly lying to Garde-Meuble inspectors for many years whenever they asked him about how the restoration work was proceeding. “We have extraordinary correspondence between the inspectors and Janvier,” says Ms. Delalex. “He got caught up in his lies and spouted increasingly implausible things to try to get out of them. The inspectors were anxious to see the clock! In 1828, Janvier’s student Bernard Henry Wagner spilled the beans. It sparked a scandal. But Wagner found the bronzes, which had been sold.” The clock was finally given back to the Garde-Meuble and returned to Versailles when Louis-Philippe opened the musée de l’Histoire de France (The National Museum of the History of France) in 1837. Now it is at the Louvre, where conservators and clockmakers removed the planet Earth from the glass globe for the first time. They were astonished to find that it had been decorated with small precious stones, each showing one of the world’s major cities. The secret had been well kept until now.