When she became mayor of Paris in 2015, Anne Hidalgo made the restoration of religious monuments the spearhead of her heritage policy. Her "church plan", which ended in 2020, is somewhat of a mixed bag. 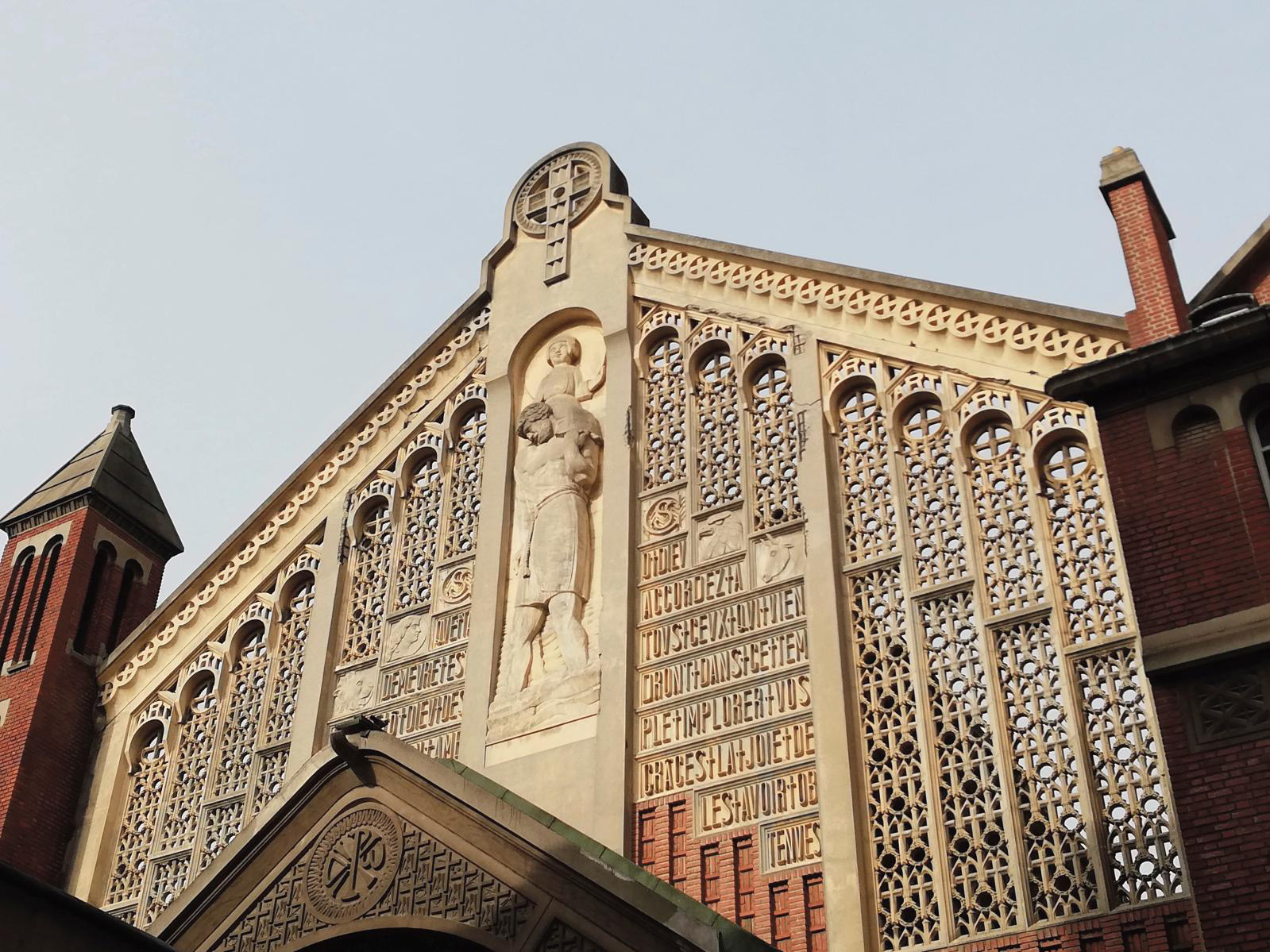 Is Paris burning? No, though its 85 churches are doing everything they can to stay standing. The City of Paris is struggling to maintain all its religious assets, which include 40,000 works of art and 130 organs. A Dangerous Building Ordinance (Arrêté de péril) has been issued for the Sainte-Trinité church; stones have fallen at Saint-Augustin; scaffolding and endless protective nets have been set up at La Madeleine, and Saint-Merri was classified as endangered heritage by the World Monuments Fund in 2014. "When part of the cross at Saint-Louis-en-l'Isle fell, almost killing the priest, it was a terrible shock. The diocese decided to create a foundation to speed up the restoration of Paris's churches," says Gabrielle de La Boulaye, sponsorship manager for the Avenir du Patrimoine Foundation begun in 2013. "We support or instigate projects, as with Saint-Séverin in 2017, where the restoration of the chapel by Mansart chapel (the 17th-century chapel by architect Jules-Hardouin Mansart), financed by a patron, made the City aware that the façade needed more work."

A Century of Neglect
In 2015, the city hall announced an unprecedented five-year "church plan" involving €140 million to launch 23 large-scale restoration projects, including at La Madeleine, Saint-Eustache and Notre-Dame-de-Lorette. Hidalgo doubled the stake of her predecessor, Bertrand Delanoë, who earmarked €150 million during his two terms, from 2001 to 2014. Although only €87 million was finally used (with €16 million going to routine maintenance), it was still a valuable operation. "Paris is now aware of its responsibility, with commitments that are moving in the right direction—at least, since 2014," says the Avenir du Patrimoine Foundation. In fact, although the municipality has owned religious buildings—and is responsible for their maintenance—since the 1905 law, it only truly realized the implications a century later. Apart from a "church plan" drawn up by Jacques Chirac in the early 1990s, which could not be rolled out before he became the French President in 1995, no city councilors had taken an interest in the issue. It is true that the State was in charge of project management until the decentralization laws of 2003-2004 came in, and responsibility for the cultural heritage of Paris was also difficult to assume for a city that had no mayors overseeing it between 1871 and 1977. At the time, prefectural supervision caused many setbacks for cultural heritage, as proved by the insalubriousness of the Marais, a historic district in the 3rd and 4th arrondissements, saved in extremis by Minister of Culture André Malraux (1901-1976) when he created safeguarded sectors. Another factor making things worse is that most Parisian churches were built in the 19th century, owing to the economic and demographic dynamism of the period, but architecture was driven less by solidity and long-term resilience than experimentation. Today, the city hall is seeing the consequences: "The spire of Saint-Joseph-des-Nations was dangerous: the stones were shattering because of the corrosion of its metal structure, a feature typical of the 19th century. We had to reassemble it using a much stronger method," says Elsa Ricaud, the architect responsible for the restoration of the bell tower porch, whose spire was restored in January 2021.

A Second, Less Ambitious Plan
There is now a string of projects underway. Restoration operations have saved the decorations of the Sainte-Croix-des-Arméniens Cathedral (€1.2 M); the façades of the Pagode du Bois de Vincennes (€400,000) and Saint-Médard (€1.2 M); the entablature of La Madeleine (€2.3 M), and the 19th-century interior decorations by Hippolyte Flandrin in Saint-Germain-des-Prés, where work was completed in December 2020. After the renovation of the solid masonry entrance of Saint-Augustin (€4.7 M), a meeting was held on March 2, 2021, to plan the continuation of the work. The task is far from over and many churches will remain under scaffolding for several years: until 2024 at the Trinité, 2023 at Saint-Louis-en-l'Isle, and 2021 at Saint-Philippe-du-Roule, Saint-Martin-des-Champs and Saint-Pierre-de-Montrouge. Although Parisian restoration projects have well withstood the recent lockdowns, which have caused only well-managed delays, a heritage architect notes that the work is being spread out over time to cope with the economic crisis. While a second "church plan", equivalent to the first, was to be announced at the time of Anne Hidalgo's re-election, Covid-19 and the falling revenues of the municipality—which has seen its debt rise to €7 billion—will reduce the scope of the work. "The Covid crisis is forcing us to prioritize operations, in liaison with the parishioners. The municipal investment plan is under discussion. For the moment, we have no figures to report on the City's efforts to continue restoration projects," says Karen Taïeb, deputy mayor of Paris in charge of cultural heritage. "€147 M was committed to work now completed, in progress or planned in the future. €80 M of this amount has been disbursed."

Funding: At the Heart of Discussions
For example, at Saint-Bernard-de-la-Chapelle, the scaffolding erected in late 2019 around a spire about to fall into ruin was dismantled in 2020, without any measures taken other than a tarpaulin covering, after the discovery of major damage requiring €2.2 million: twice the initial investment. "I don't agree with this excuse that there isn't enough money as justification for postponing the work," says Hervé Lancelot, Ile-de-France delegate of the Fondation du Patrimoine, which, when necessary, helps out with large-scale projects (like the restoration of the stained-glass windows of Sainte-Elisabeth). "These projects provide jobs that bring in tax revenue, and well-maintained cultural heritage creates tourist appeal." Everyone is talking about the lack of means, from Stéphane Bern, who harshly criticized the situation in 2017, to Pierre Vivarès, the priest of Saint-Louis-en-l'Isle, who was disconsolate the day after the fire at the Notre-Dame Cathedral, and saddened that "we have to wait for a stone to fall in the street before we can start work." So the time has come to seek new funding. Patronage, for which a post was created in the City in 2014, is developing through the action of the Avenir du Patrimoine Foundation (€600,000 in 2020), but is not yet quite meet the level of need. "Our action enables us to accelerate or sometimes initiate restoration projects, but it will never replace the work done by the city hall, which must continue to assume responsibility," says Gabrielle de La Boulaye. For example, the foundation contributed €74,000 to the restoration of the Chapel of the Virgin Mary at Notre-Dame-de-Lorette, which was completed in December 2020. The display of advertising banners on the scaffolding also raised €400,000 in 2017 for Saint-Eustache, La Madeleine and Saint-Augustin. Another possibility: while the diocese roundly rejected the idea of charging admission to churches, the municipality is looking to develop income-generating events like film shoots, rentals and concerts. This would also help to enhance respect for the buildings.

Church as Places to Visit
"We need to talk about the churches of Paris, because Parisians do not relate to their 'minor' cultural heritage in the same way as people do in the surrounding areas," says Hervé Lancelot. In this sense, the "church plan", even if it is insufficient, at least arouses interest. "The fire at Notre Dame Cathedral has had unexpected consequences: the City has re-mobilized on behalf of the churches, and all of them have been given attention," says Yves Trocheris, the priest at Saint-Eustache. "More tourists are coming through our doors. This means that we have to rethink the circulation, and also decide how to showcase our recently restored Rubens, Les Pèlerins d’Emmaüs (The Pilgrims of Emmaus)." The Art, Culture et Foi Association (Art, Culture and Faith) wants to take advantage of this to publicize the churches of Paris through the new edition of its guide. Although some do not appear in it—like the Sacré-Coeur, considered by its priest to be a place of worship, not a tourist trap—, for François Drouin, the association's president, the key to maintaining religious heritage lies in promoting it: "The closing of museums enables us to reaffirm the artistic glories of our buildings. It is our task to step up to the mark and attract people. With this in mind, we are training guides, and staging events in places of worship on philosophy, music, cinema, contemporary art, and so on."